Mount Nokogiri stretches east-west in the Boso Peninsula of Chiba prefecture and is known for its great viewpoints and a wealth of ancient Buddhist stone sculptures and rock carvings in a setting of beautiful landscape. 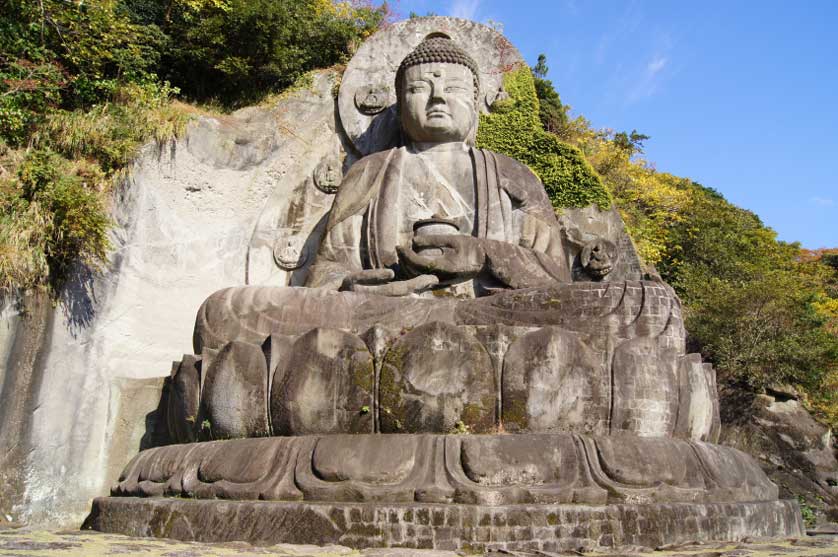 Mount Nokogiri (Nokogiriyama in Japanese, 330 meters at its highest peak) is a rather long mountain stretching in an east - west direction along the border of the city of Futtsu with the town of Kyonan in the southern part of the Boso Peninsula in Chiba Prefecture. Its name translates as "Saw Mountain" and if you look at it from a distance, the mountain ridge with its wooded peaks and depressions does remind somewhat of a traditional Japanese saw.

The western edge of the mountain falls steeply towards the Uraga Channel, the narrow entrance from the Pacific Ocean into Tokyo Bay. Mt. Nokogiri offers great viewpoints and a wealth of ancient Buddhist stone sculptures and rock carvings in a setting of beautiful landscape.

There are several ways to explore the mountain. Very popular is the Nokogiri Ropeway, an aerial lift that takes you right to the top. From the upper lift station, most exploring will be downhill, saving some breath while managing the 2,639 steps leading up to the top from Nihon-ji Temple at the foot of the mountain.

Another option would be driving up. A curvy toll road leads close to the top. Only cars are allowed on the road, motorcycling, bicycling and walking are prohibited. That might sound like it is a tough road but actually, it's a fairly easy drive compared to many other mountain roads in Japan - on which bikes and hikers are perfectly welcome.

The third way to go up would be climbing the steps. If you are interested in the history and heritage of the mountain that would be the way to go. 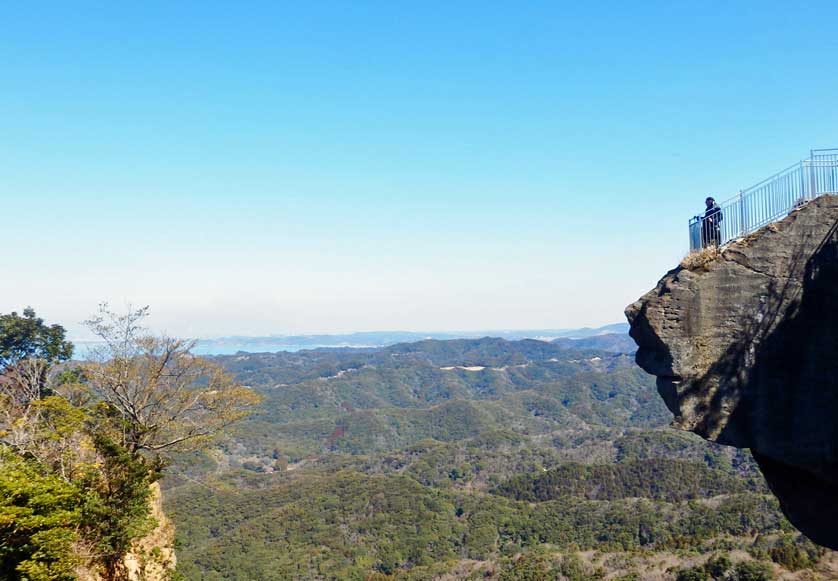 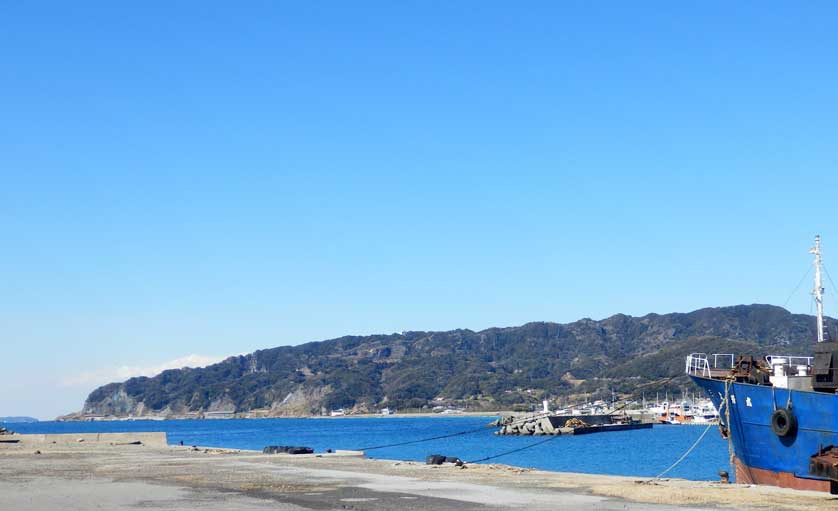 Nihon-ji Temple, located very much at the foot of the mountain, serves as the entrance to the stairways leading up. In fact, the whole upper section of the mountain belongs to the temple and has been shaped by its history.

The temple was founded on an imperial order by Nara Period Emperor Shomu in 725 A.D., making it the oldest Buddhist temple in the Kanto area founded via imperial decree. The emperor and his wife, Empress Komyo, according to the temple's own published history, bestowed the temple with 18 tons of gold, an imperial tablet hand-written by the emperor and a scroll featuring 33 images of Buddha personally embroidered by the empress.

Emperor Shomu, who undertook a great expedition to the Kanto area shortly after his coronation (in 724), obviously understood the importance of a cultural stronghold in this, then still largely barbarian land, at a location overseeing large swaths of land and guarding the entrance to a large bay - a bay which would indeed much later become the center of Japan. Call him a visionary.

(In 741, Emperor Shomu started the Kokubunji program, aimed at founding an imperially controlled Buddhist temple in every province more or less under imperial control.)

Despite its grand and early start, it would take the Nihon-ji temple almost a thousand year to rise to its intended importance. With the rise of Edo (today's Tokyo) as capital of Japan in the early 17th century and especially under the tutelage of Shogun Iemitsu Tokugawa (1604 - 1651), the third Edo Shogun, the temple eventually became a thriving institution of national prominence, a position it held throughout the remainder of the Edo Period (1603-1868).

While the names of the leading Buddhist scholars of those days might today ring a bell only with scholars of the field, the Buddhist artwork created in the upper reaches of Mount Nokogiri at the time is still a major draw to the mountain. 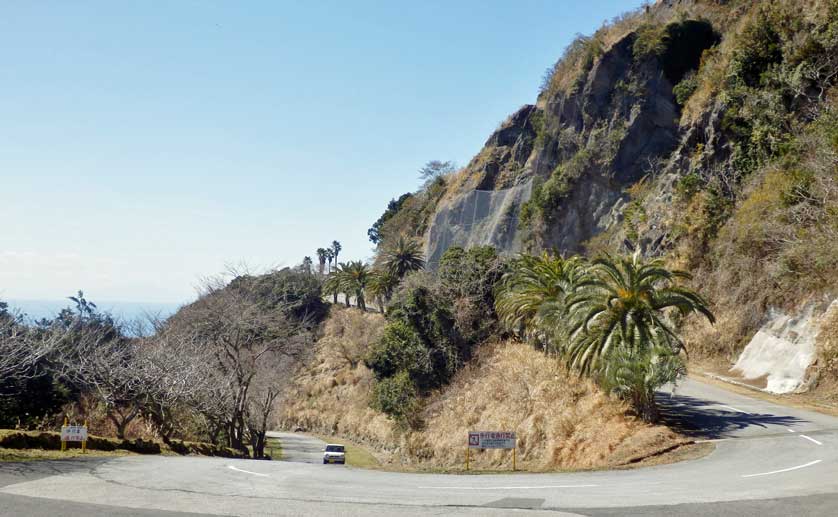 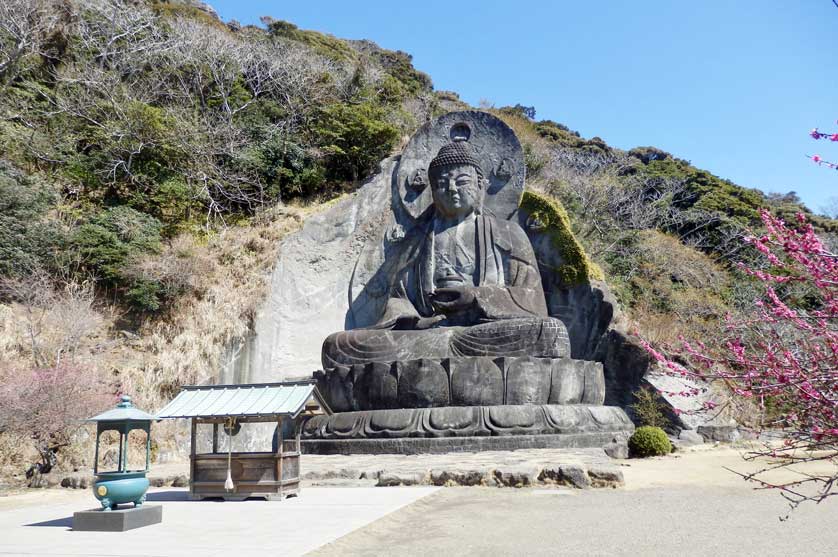 About half-way up the mountain, you arrive at the Nihon-ji Daibutsu, Japan's largest ancient Buddha stone statue. The Buddha, sitting in a lotus position, is 31.5 meters tall in total. For comparison, the famous Daibutsu stone Buddha in Kamakura has a height of only 13 meters.

The statue is, despite its massive size, a very fine work of stone carving, created by an artist named Jingoro Eirei Ono and his 27 disciples from 1780 to 1783.

Traveling by car, the Daibutsu has its own parking area and temple entrance about midway on the Nokogiri toll road. The walkway from the parking lot to the Daibutsu is barrier-free (no steps). 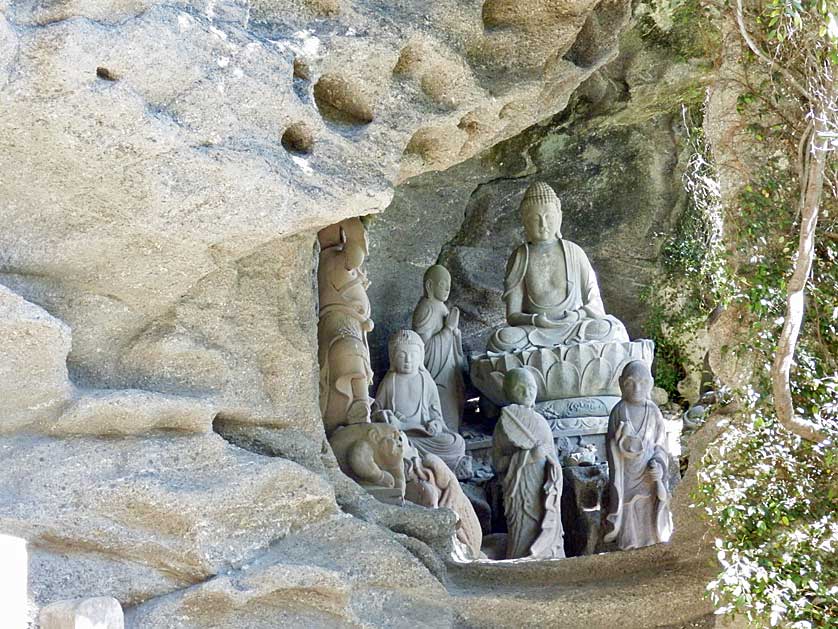 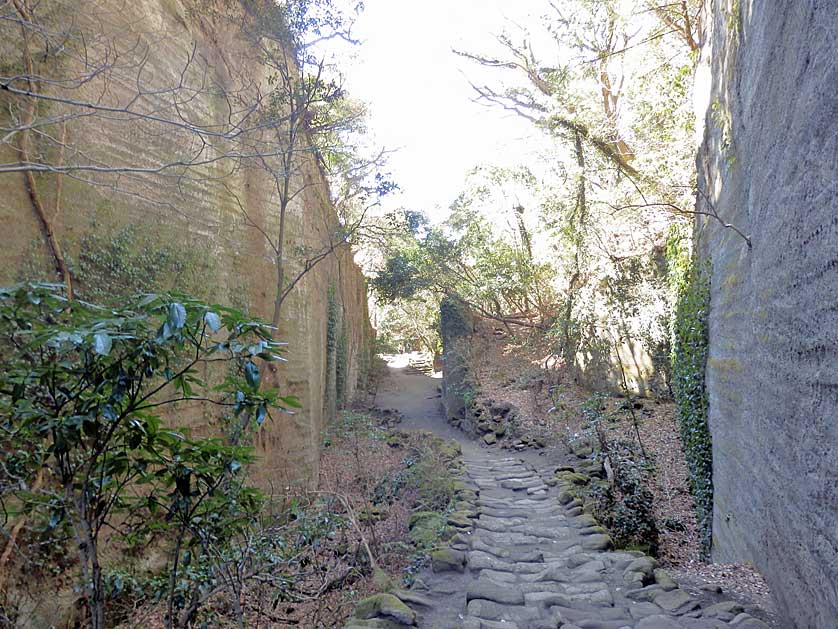 Climbing further up the steps of Mount Nokogiri, you soon arrive at a number of intersections. The stairway splits off in several directions, leading to a number of arhat stone statue gardens.

Arhat, known as rakan in Japan, were early disciples of Buddha who had achieved a state of perfect enlightenment, had left the mundane world behind them and lived in a state of nirvana.

While the Kawagoe rakan have each their very own and very worldly personality, the 1500 rakan at Nokogiri are more of the somber type, smiling the smile of someone who has already transcended worldly life.

What makes the Nokogiri rakan spectacular, is, besides of their sheer number, the setting. The rakan statues are placed under rock overhangs, into caves, next to rocks of fantastic shapes.

The statues are the work of the same Jingoro Eirei Ono and his 27 disciples who had also carved the big Daibutsu. Ono and his apprentices worked on the 1500 rakan from 1779 to 1798. 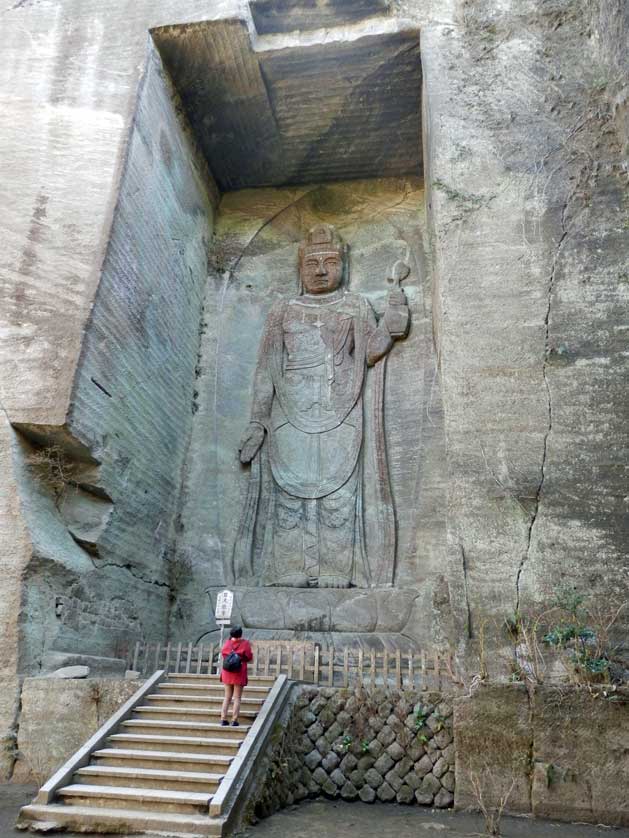 Signs point to the Hyaku-Shaku Kannon in a particularly deep gorge. Kannon is the Goddess of Mercy in Buddhism, shaku is an ancient Chinese measurement, translating to about 30 centimeters. Hyaku-shaku (100 shaku) translates therefore to about 30 meters. That's the height of the huge stone carving of goddess Kannon in that deepest of the gorges, created in Edo times.

Standing in front of the carving and looking towards the sky, you see an overhanging piece of rock stick out. Often with people standing on it, waving towards a position higher up. That's the Jigoku Nozoki, the "Peep of Hell", Mount Nokogiri's most famous viewpoint. 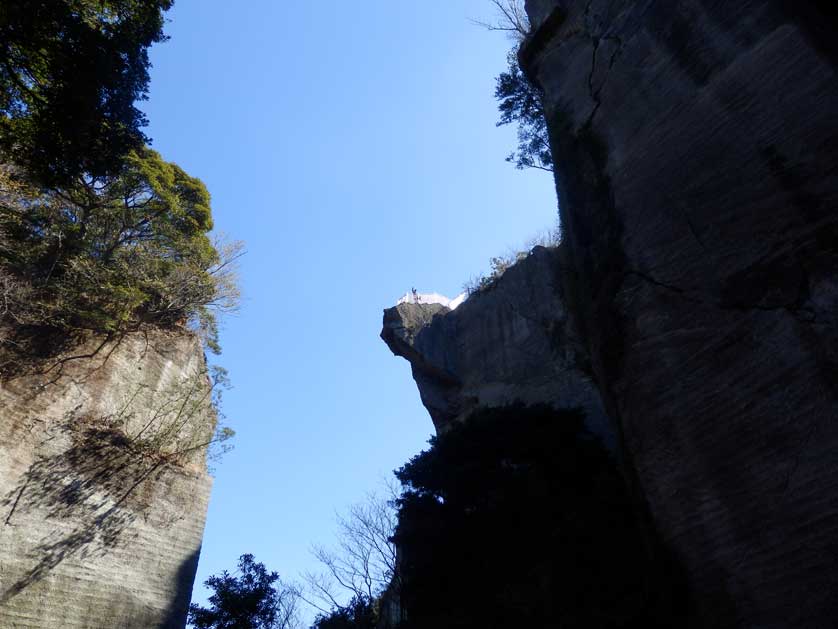 It takes another set of stairs to get close to the Jigoku Nozoki. You eventually reach a little plateau - it's the prefect photo spot to click a pic of someone standing on the actual Jigoku Nozoki. There, the family members or friends will line up to record the proud smiles and wavings of those climbing the Jigoku Nozoki. On sunny days, it tends to get crowded.

Today, the Jigoku Nozoki is secured by a sturdy metal fence. The name for the place, Peep into Hell, was of course conceived when entering that little rock ledge high above the surrounding landscape was really a challenge, combining the beauty of an incredible view with certain death once your feet made a mistake on the rocky ground. That's not the case anymore. Today, the Jigoku Nozoki is perfectly save.

Kurihama, that's the place were Admiral Perry landed with his fleet of black ships in 1853, demanding and achieving the opening of Japan to the West.

Kurihama, that's also from were today the Tokyo Bay Ferry leaves, connecting the Metropolitan Area right to the foot of Mount Nokogiri. 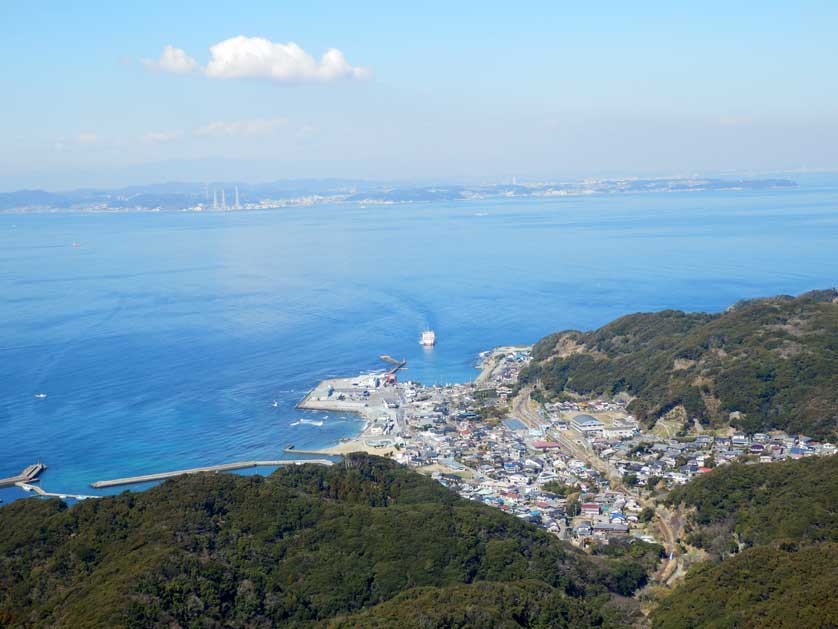 View from Mount Nokogiri towards the Uraga Channel, Kanaya Town and an incoming Tokyo Wan Ferry

From Tokyo, take a JR Chuo Line train to Chiba Station. There, change to the JR Uchibo Line to Hama - Kanaya Station (if you want to use the Nokogiri Ropeway lift) or to Hota Station if you want to walk up the steps from Nihon-ji Temple.

Cross Tokyo Bay using the Aqua Line. At Kisarazu Junction, turn onto the Tateyama Expressway. Leave the expressway at the Futtsu - Kanaya exit, drive into Kanaya Town, then turn south onto coastal highway 127.

The entrance to the Nokogiri Toll Road leading up the mountain is right behind a tunnel through the base of the mountain and easy to miss.

The toll for a regular car is 1,000 yen. There are no parking fees to be paid on the parking areas up on the mountain.

On the Nokogiri Toll Road only cars are allowed. Motorbikes, bicycles and walking on the road are prohibited.

An alternative way to travel both by car or by train offers the Tokyo Wan Ferry. The ferry crosses the Uraga Channel from Kurihama Port on the Miura Peninsula in Kanagawa Prefecture and arrives right below Mount Nokogiri at Kanaya Port.

To use ferry the train - ferry connection from Tokyo, take the Keikyu Main Line from Shinagawa Station to Horinouchi, change there to the Keikyu Kurihama Line, get off at Keikyu Kurihama Station. Then take a taxi or bus number 7 or 8 to the ferry port.

The ferry also takes cars. The fare depends on the size of the car. For example, a one-way ticket for a car shorter than 4 meters is 3,120 yen.

Please see further information on the ferry, its schedule and fare charges on the English-language Tokyo Wan Ferry website.

The Nokogiri Ropeway ground station is in short walking distance from Kanaya Port.

The Nokogiri Ropeway is an aerial lift that transports passengers from Kanaya Town right to the upper reaches of Mount Nokogiri. The trip takes 4 minutes, a return trip ticket for an adult is 900 yen (one-way 500 yen), children return 450 yen (one-way 250 yen). The lift operates daily from 9 am to 5 pm. 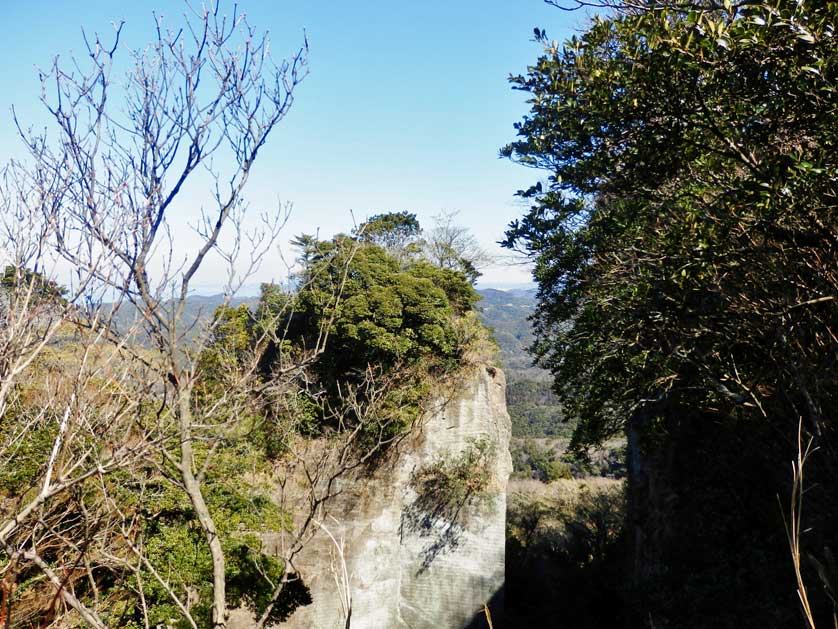 Rocks at the top of Mount Nokogiri, Chiba Prefecture 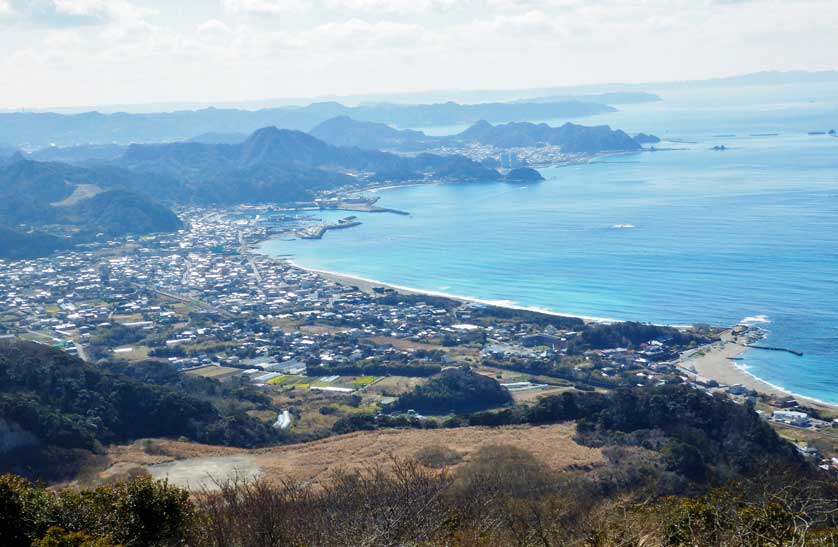