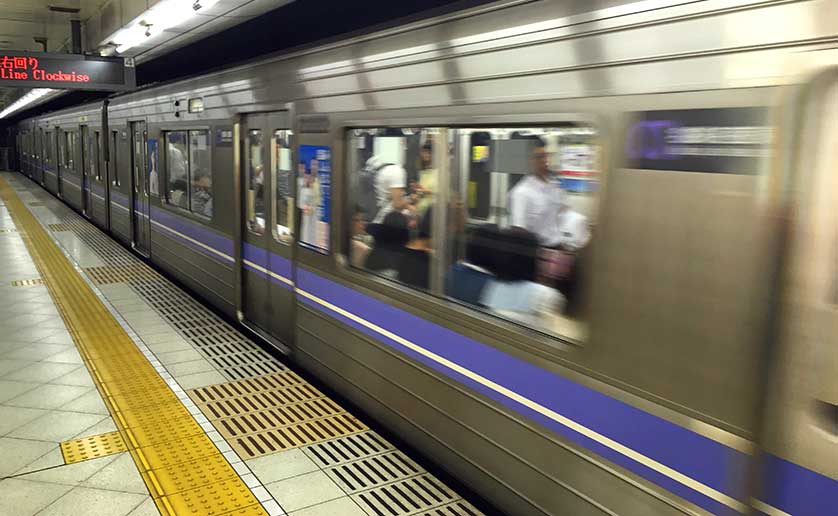 The Meijo Line in Nagoya is one of the six main subway lines of the Nagoya subway system.

The Meijo Line, which is marked purple on subway maps, is a circle or loop line, larger than the over ground Osaka Loop Line in Osaka but smaller than the Yamanote Line in Tokyo. The Toei Oedo Subway Line in Tokyo is the only other subway loop line in Japan.

Parts of the Meijo Line first opened in 1965 as Line 2. The full loop was completed in 2004 and the Kanayama Station to Nagoya Ko (Nagoya Port) section became the Meiko Line. 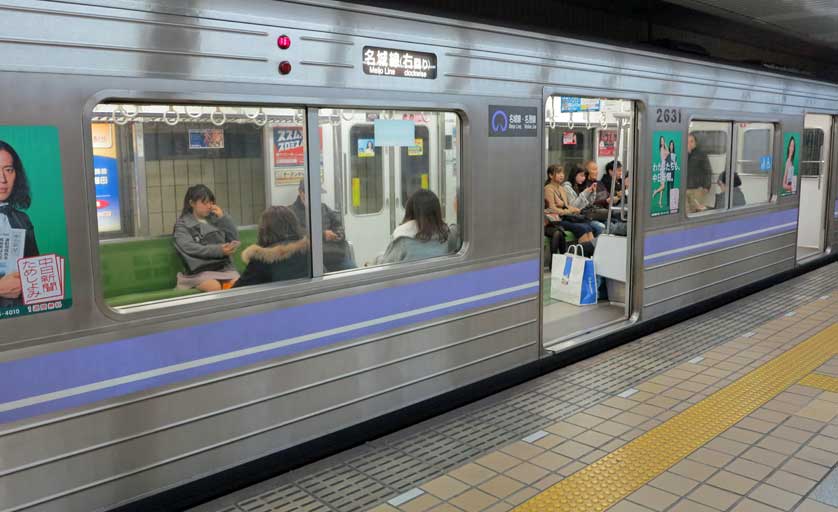 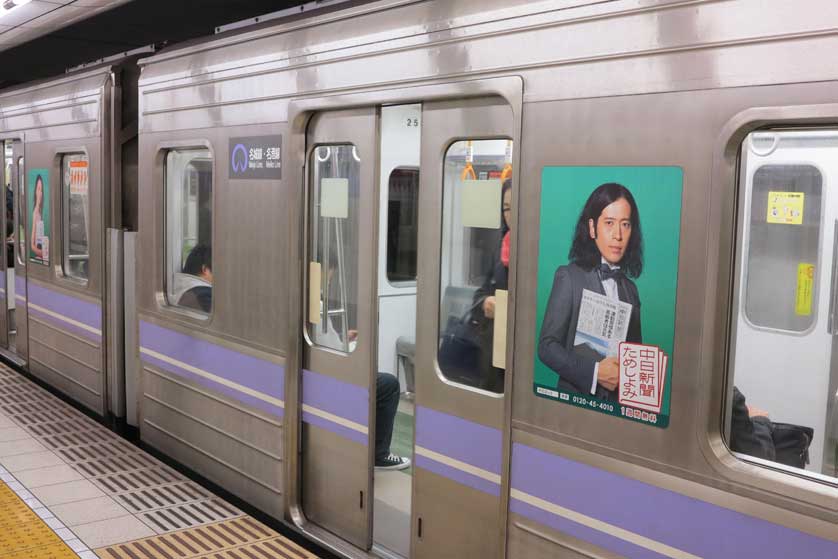 After Nagoya Station, Kanayama Station to the south in Naka-ku is Nagoya's most important rail hub and a main station for the Centrair express train connecting to Chubu International Airport. Kanayama Station serves both JR and Meitetsu suburban trains with their respective entrances on either side of the main concourse. The Meitetsu lines connect to Toyohashi, Gifu, Inuyama, the Chita Peninsula and Chubu International Airport. Heading south east the next stop on the Meitetsu Line is Jingu-mae Station from where trains go either south on the Meitetsu Airport Line to Tokoname and Centrair or east on the Meitetsu Nagoya Line to Toyohashi via Narumi, Otogawa and Higashi Okazaki. On Japan Railways (JR) there are frequent connections to Ena, Nakatsugawa and Matsumoto in Nagano Prefecture, Ogaki, Gifu, Maibara, Handa, Gamagori, Toyohashi and on to Hamamatsu in Shizuoka Prefecture.
Kanayama is the northern end of the Meiko Line to Nagoya Port.
The Kanayama district is also a lively shopping and entertainments hub with a number of places to stay in hotels around the station. The Nagoya Boston Museum of Fine Arts (tel. 052 684 0786) is just outside the station in the same building as the ANA Crowne Plaza Hotel Grand Court.

Kamimaezu Station is convenient for the shopping and entertainments area of Osu Kannon. Osu Kannon is Nagoya's version of Tokyo's Akihabara and Harajuku rolled into one. Electronics, hip fashion, cool eateries plus Nagoya's signature second-hand stores predominate. The area has a number of covered arcades (shotengai) radiating out from Osu Kannon Temple. Another famous temple in the Osu Kannon area is Banshoji. Kamimaezu is also on the Tsurumai Line.

Yaba-cho Station is at the southern end of the Sakae shopping and entertainment area. It is convenient for Nagoya's Apple Store and the Parco and Matsuzakaya department stores. Nadya Park and the IdcN Design Museum are also close by.

Sakae Station is on the Higashiyama as well as the Meijo Line. Sunshine Sakae, with a 42 meter Ferris wheel, many shops and restaurants and a pachinko parlor is a major landmark in Sakae along with the Louis Vuitton store close to the station. On the east side the Chunichi Building is another standout building, mainly for its drabness, with more shops and eateries.

Hisayaodori Station is on the northern edge of Nagoya's main shopping and entertainment area of Sakae. Hisayaodori is convenient for the Nagoya TV Tower and Oasis 21. From Meitetsu Sakae-machi Station trains run out to the pottery town of Seto to the east of Nagoya on the Meitetsu Seto Line. Oasis 21 contains the Sakae Bus Terminal with extensive local and highway buses. The Aichi Prefectural Museum is also adjacent. 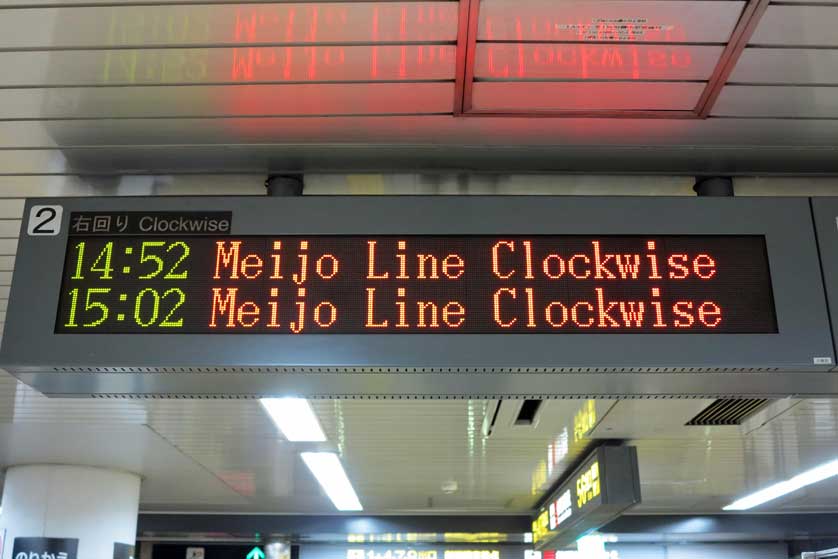 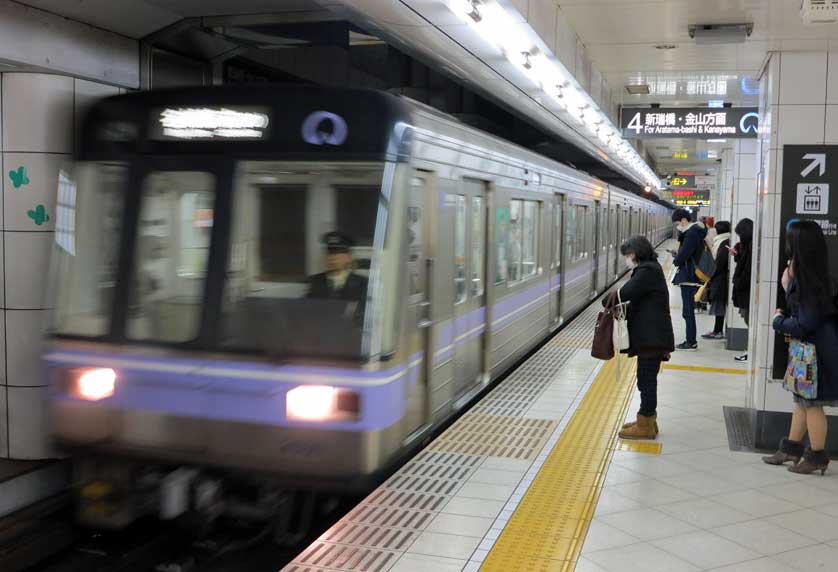 Meijo Koen Station is less convenient for Nagoya Castle but is better for the ornamental gardens and cherry trees of Meijo Koen (Meijo Park).

Kurokawa Station is close to Nex Plaza, a free museum dedicated to expressways (kosokudoro) in Nagoya.

Shiga-hondori Station is located within a largely suburban area of northern Nagoya city.

Ozone Station is on the JR Chuo Line, which links Ozone Station to Tsurumai Station, Nagoya Station, Kanayama Station, Chikusa Station, and then north east to the outlying towns of Kasugai, Tajimi, Toki, Ena and Nakatsugawa.

Ozone Station is also the terminus for the Yutorito Line (ゆとりーとライン), which is a bus which runs on an elevated track to the suburb of Obata Ryokuchi and is the only guided bus line in the country.

Ozone Station is also on the Meitetsu Seto Line between Sakae-machi, 5 stops to the west, and Owari Seto, 14 stops to the east in Seto city.

Ozone is a terminus for local buses with services to Shin-Moriyama via Koshin, Midorigaoka Jutaku via Obata, Imba Station, and Fukiage via Imaike.

Nagoya Dome-mae Yada Station connects with Yada Station on the Yutorito Line and is the nearest station to Nagoya Dome, home of the Chunichi Dragons baseball team and a major conference and concert venue to boot. Also close by is an Aeon mall and the new Dome-mae campus of Meijo University. 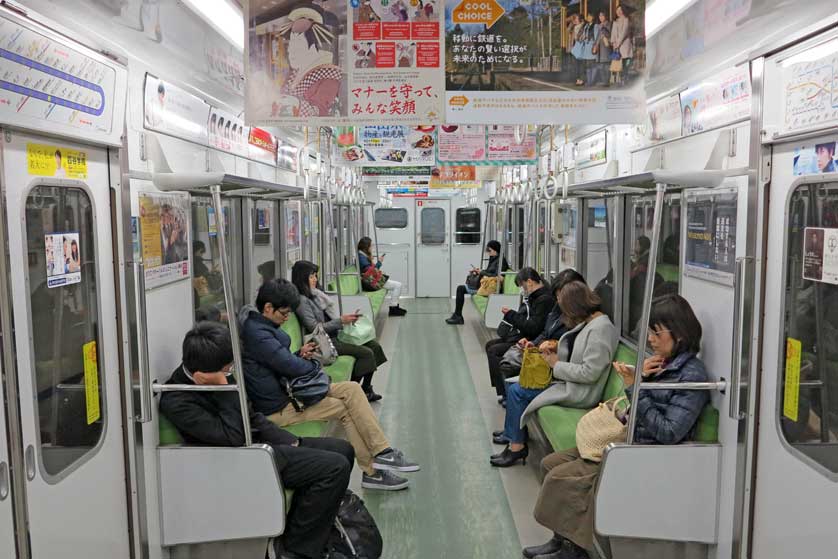 Sunada-bashi is located in an unremarkable suburban area of town, close to a several home centers and malls serving the residents of many large blocks of social housing in the area. A ten minute walk south of the station is the free Historical Museum of Waterworks and Sewerage. Nearer to the station is the brick, Meiji era Old Nabeyaueno Water Purification Plant No. 1 Pump Station standing next to the modern Nabeyaueno Water Purification Plant.

Jiyugaoka Station is the nearest station to the Aichi Prefecture Cancer Center and is also within walking distance of the north western edge of Heiwa Park.

Motoyama is one of Nagoya's most affluent areas close to some historic temples, shrines and parks. Within easy reach of Motoyama are Heiwa Koen, Nagoya University, Higashiyama Park, Toganji Temple, Shiroyama Hakusan Shrine (formerly Suemori Castle) and a number of other small shrines and temples. Among the specialist shops, bars and restaurants, Cafe Lembeek serves delicious Belgian beer and gourmet food.

Nagoya Daigaku Station is the nearest stop to the prestigious Nagoya University.

Yagotonisseki Station is adjacent to the large Nagoyadaini Red Cross Hospital and close to the main campus of Nanzan University.

Yagoto Station connects with the Tsurumai Line and is a small entertainment and dining hub close to Chukyo University, Koshoji Temple and the vast Yagoto Cemetery.

Mizuho Undojo Nishi Station is east of the Mizuho Undojo which contains a soccer stadium for Nagoya Grampus, the city's J-League team, a rugby field and baseball stadium. 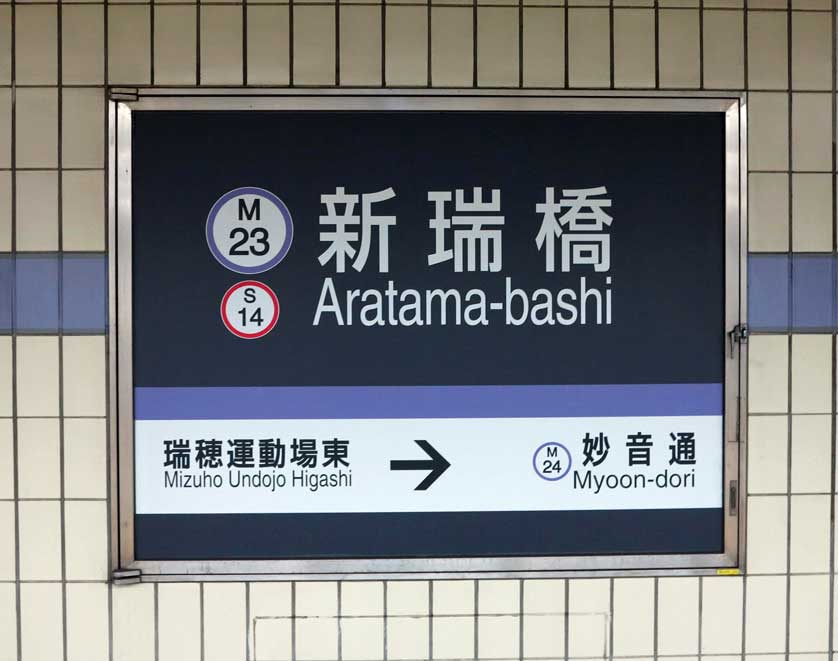 Aratamabashi Station is an interchange station with the Sakura-dori Line.

Myoon-dori Station is close to Yobitsugi Station on the Meitetsu Nagoya Main Line from Gifu to Toyohashi.

Jingu Nishi Station is the most convenient station for Atsuta Jingu and Shirotori Garden. On the other side of the shrine's large grounds are Meitetsu Jingu-mae Station and JR Atsuta Station. 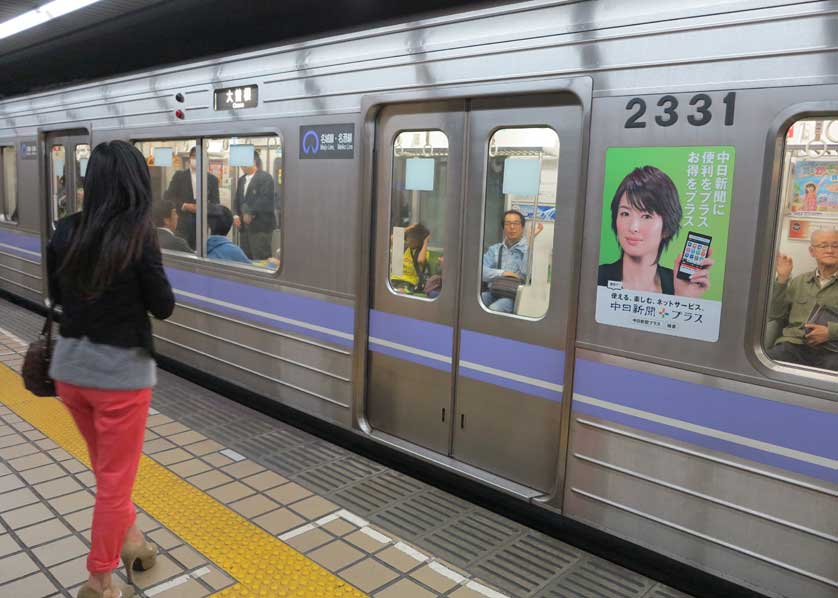 The Meijo Line is a circular, loop line of the Nagoya subway network running from Kanayama through Sakae, Motoyama, yagoto and Aratama-bashi stations.