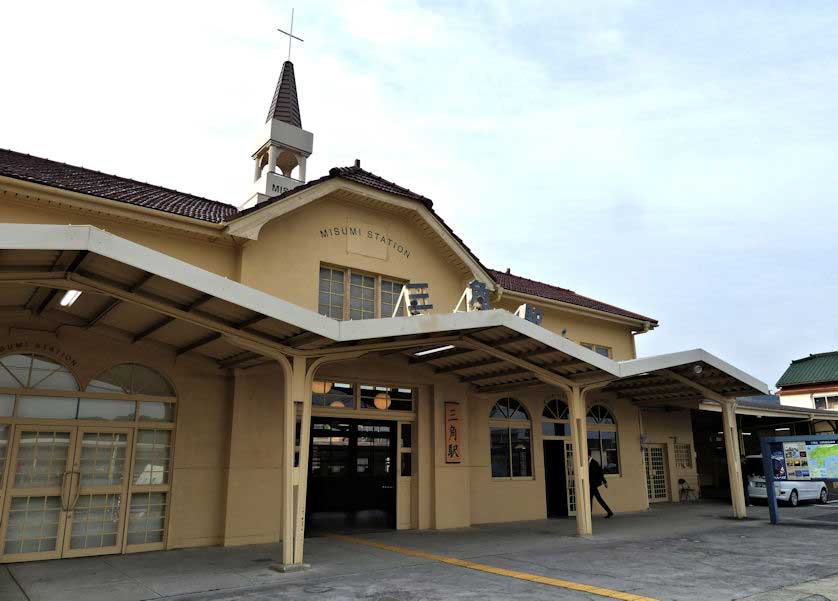 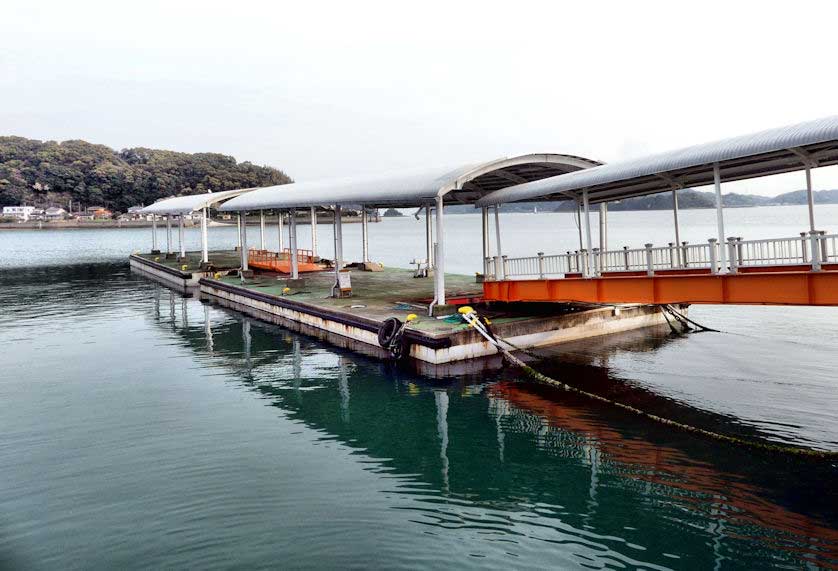 The dock for ferries to Amakusa from Misumi

Misumi is a small port at the tip of peninsula southwest of Kumamoto city.

Just off the peninsula are the Amakusa Islands, famous for having been the home to a large population of Hidden Christians, and one of the most popular dolphin watching spots in Japan.

The islands are now connected to the mainland via the famous Five Bridges of Amakusa, and so Misumi has become known as the Gateway to Amakusa.

Since 2015, nearby Misumi West Port has been a UNESCO World Heritage Site. It is one of the 23 sites that make up of the Sites of Japan's Meiji Industrial Revolution: Iron and Steel, Shipbuilding and Coal Mining.

This has substantially increased the number of visitors to Misumi. 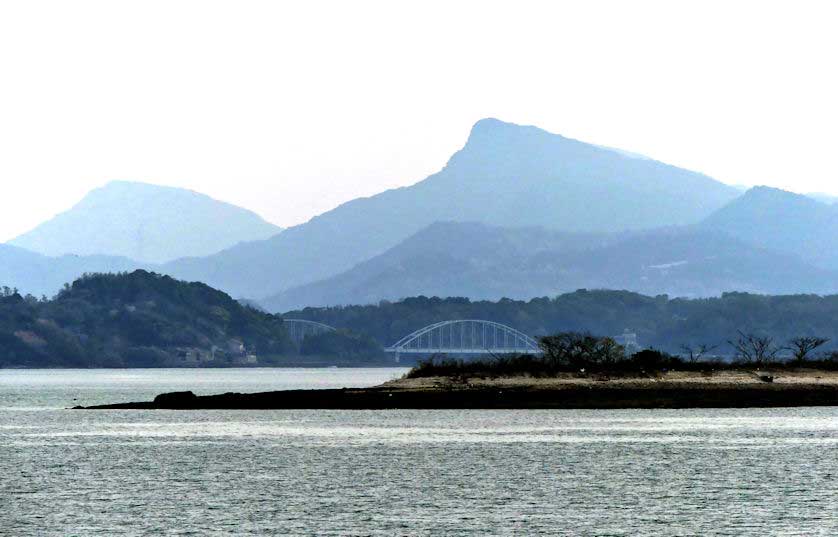 The view of the Amakusa Islands from Misumi Port 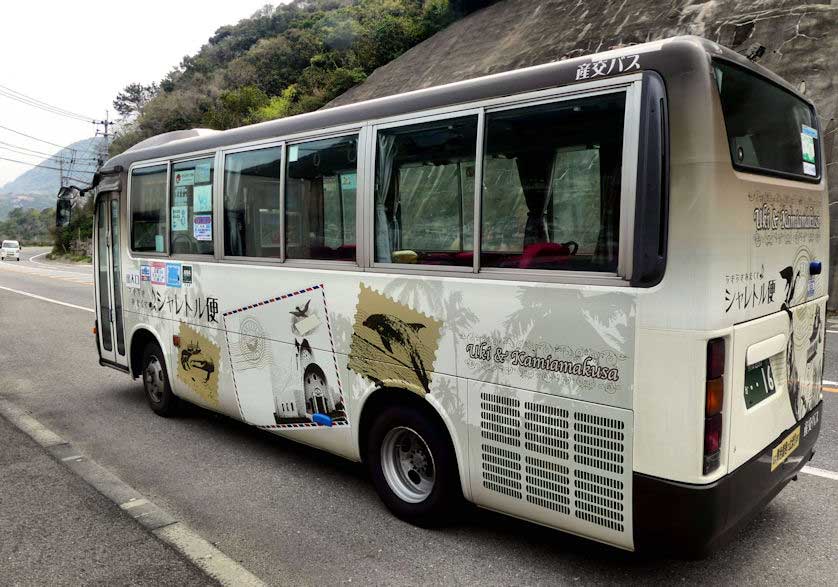 Small local buses run across to and between the Amakusa Islands

Misumi is the terminal station of the JR Misumi Line. The line starts 25 kilometers away in the town of Uto on the Kagoshima Main Line that connects to Kumamoto Station where all trains on the Misumi service originate.

From Kumamoto the local service takes just 52 minutes to reach Misumi and costs 740 yen. There is a special Limited Express service that features an elegant, reservation only, sightseeing train called the "A" Train. Named after a famous jazz tune, the A also stands for Amakusa and also Adult as the train features a bar serving alcohol.

The interior of the train is very retro and was designed by Eiji Mitooka who designed many of Kyushu's special trains. Mitooka's designs include the Kawasemi Yamasemi, the luxurious Seven Stars, the Sonic and Yufuin no Mori.

The train operates mostly on weekends and holidays, with two round trips per day, timed to connect with the ferry service to Amakusa. Reservation only, the fare is 1,880 yen and the journey takes just 27 minutes with one stop at Uto. 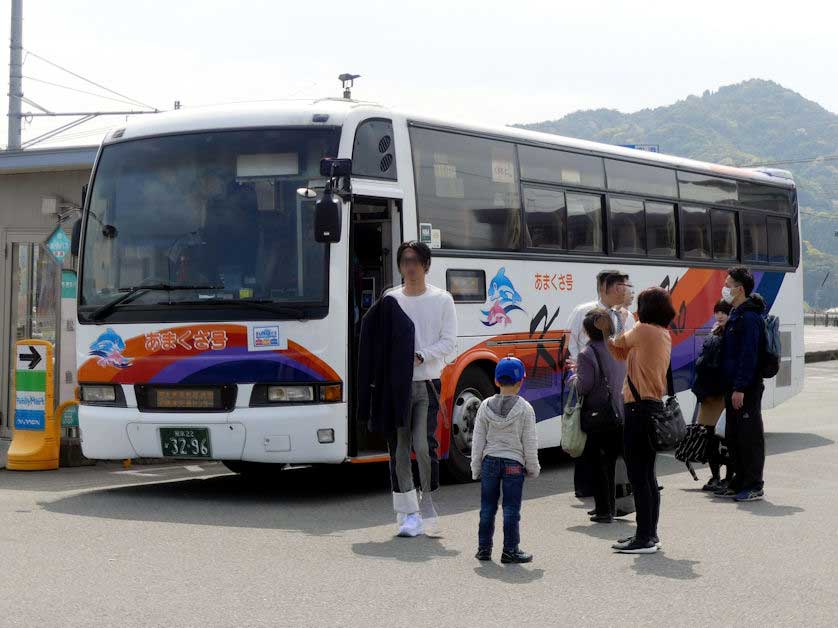 Sanko inter-city bus runs from Kumamoto to Hondo via Misumi

Ferries to Amakusa leave from the dock across from the JR Station, accessible via a covered walkway. There is no office so tickets can be bought in the train station or on board the ferry.

The ferry stops first at Matsushima at the northern end of Kamiamakusa Island. The scenic ride takes just 17 minutes and passes between some of the smaller islands.

The ferry then continues on to Hondo, the main city on the Amakusa Islands located on the largest island, Shimoshima.

The journey time from Misumi to Hondo is just under an hour. The one way fare from Misumi to Matsushima is 900 yen, and Misumi to Hondo 2,200 yen. Children's fares are half price, and round trip tickets are slightly less than double the single fare. Timetables and details in English can be found on the ferry company website.

It is possible to book a one day dolphin watching trip from Kumamoto via the A Train and ferry and including a lunch in Matsushima. Details at the website above. 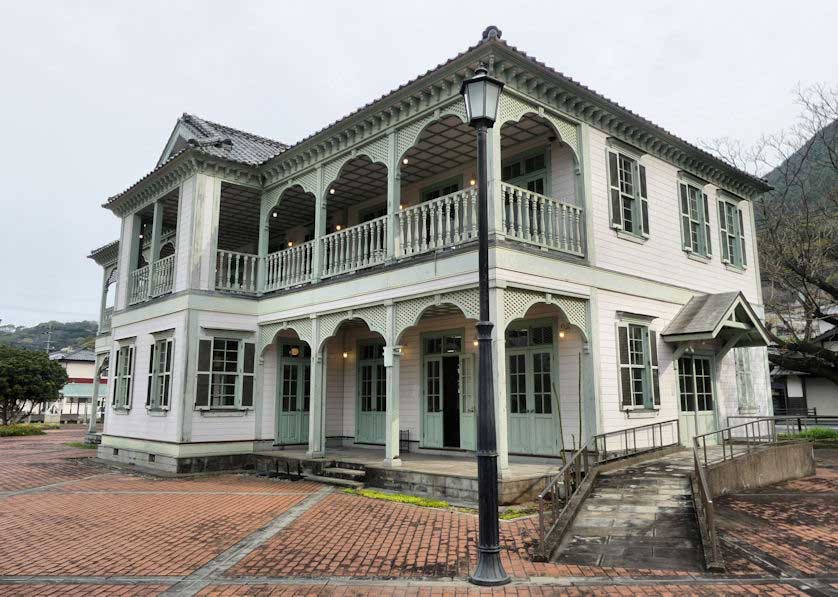 A reconstruction of the hotel that Lafcadio Hearn stayed in

Other options for getting on to the Amakusa Islands from Misumi include an Express Bus service operated by Kyushu Sanko Bus from Kumamoto to Hondo that stops at the entrance to the Five Bridges, about 700 meters from the station, a 3 minute bus ride. From Misumi to Hondo is about 80 minutes, and costs about 1,600 yen.

There are also smaller, local buses that run across the bridge from Misumi to the islands that connect to local buses that reach most parts of Amakusa. These buses are slower and travel through many of the smaller villages off the main highway. 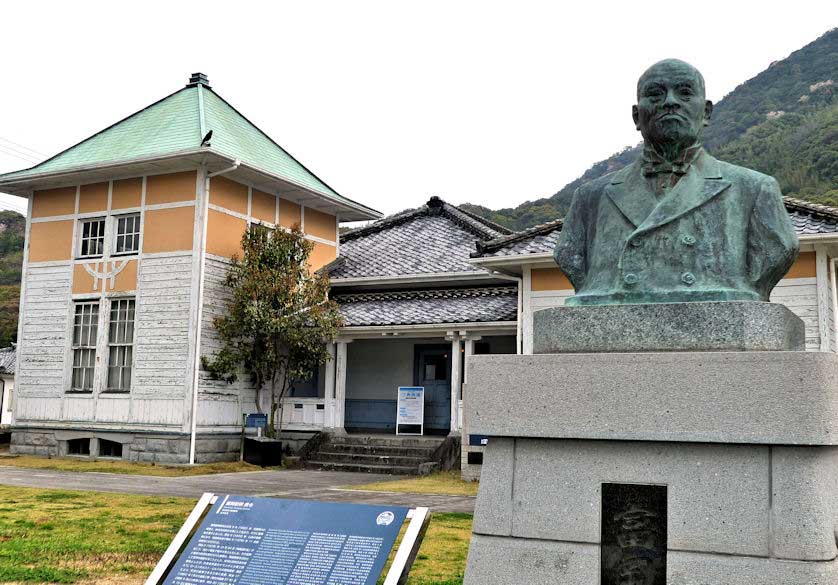 Misumi West Port was constructed in 1887 as one of three ports devoted to exporting.

It was deemed cheaper to build this new port rather than dredge and refurbish Misumi Port to accept bigger boats.

Dutchman A. Rouwenhorst Mulder had a hand in designing the harbor along European lines, though all the stonework was done by local stonemasons.

The primary export from the port was coal from the Miike Mines 40 kilometers to the north. Some of the coal was exported to China, but also other commodities such as rice and wheat.

A small town grew up around the harbor with a mix of Western and Japanese architectural styles. Lafcadio Hearn spent some time here and is reputed to have enjoyed it.

The distance to the coalfield was too great for economic efficiency, and after Mitsui took over the coal mines they constructed a major new port closer to the mines and Misumi West Port fell into disuse, which is why some of the historic buildings still exist today.

The stone walls of the quay are still as they were more than a century ago, and much of the waterfront is a pleasant park.

The historic buildings are open to the public for free and include the old courthouse, town hall, County Office, and a shipping company office and warehouse. Several have cafes inside.

The grandest building is not original, rather a reconstruction. A western-style hotel, it was dismantled in 1887 and moved to Dalian in China. The reconstruction was built in 1993. 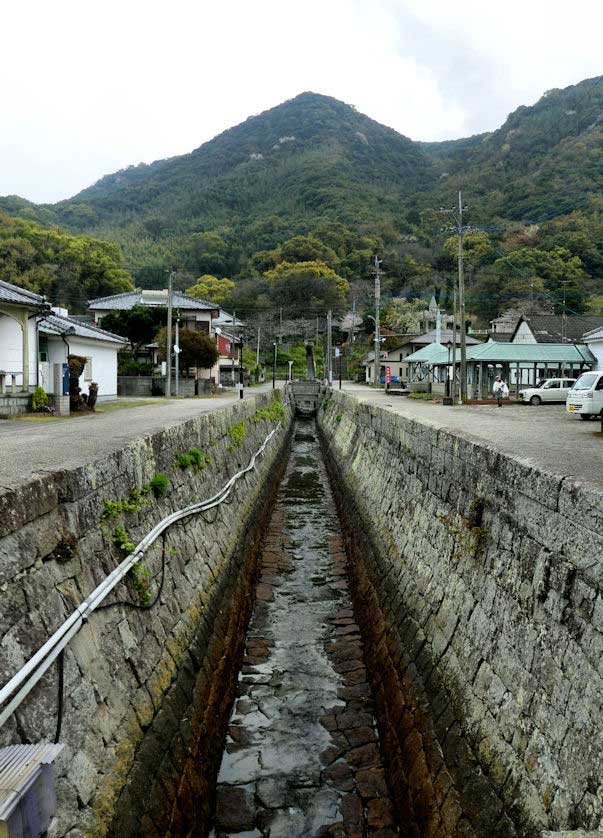 This mountain village, southeast of the mighty Mount Aso, is known for Japanese legends and its beautiful ravines.