Nijo Castle: read a guide Nijo Castle in Kyoto. Nijo Castle was the powerbase of the shogun in the ancient capital of Kyoto, Japan. 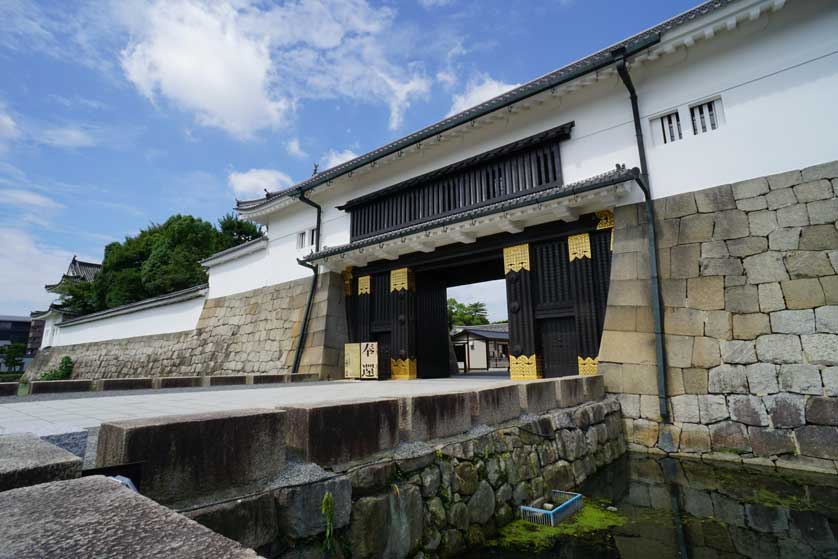 Nijo Castle or Nijo-jo, in the west of Kyoto city, was built for the first shogun Tokugawa Ieyasu, who ruled a newly-united Japan from 1603-16, but the great man died before the structure was fully completed.

Nijo Castle was to be Ieyasu's luxury pied-a-terre for whenever he visited from Edo (present-day Tokyo). But it was not completed until ten years after Ieyasu's death in 1626 and served as the Kyoto residence for the Shoguns from the third shogun, Tokugawa Iemitsu, on.

Nijo-jo remained unused from then until 1862. It served as the temporary seat of the Japanese government at the time of the Meiji Restoration in 1868. It was here that the Emperor Meiji issued the edict abolishing the Shogunate. Between 1871 and 1884, the building was used as the Kyoto Prefectural Office and much damage was done to the priceless objects within. Restoration has been ongoing ever since.

In 1939 the Imperial Family donated the site to the city of Kyoto; it was opened to the public the next year. It is now a UNESCO World Heritage site.

More recently, Nijo Castle has been used as a film location for both Japanese and foreign productions, including Tom Cruise's The Last Samurai and movies involving Beat Takeshi and Nagisa Oshima.

The new castle, like his mausoleum in Nikko, revealed Ieyasu's taste for the opulent and the symbolic. The greatest artists from the Kano school of painters labored to create beautiful painted screens and sliding doors filled with images symbolizing the power and grandeur of the new Tokugawa regime. Pine trees noted for their longevity and strength, ferocious tigers, leopards and birds of prey, gracious peacocks and cherry blossoms. 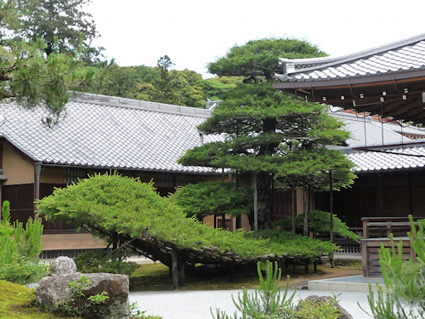 Nijo-jo is surrounded by stone walls with turrets at the corners and a moat. The grounds cover an area of about 28 hectares. The original garden did not contain trees as their falling leaves were an uncomfortable reminder of the mutability of things. Thus, the trees you see today are a more recent addition. Nijo Castle is now renowned as a plum and cherry blossom viewing site in spring.

Entrance to Nijo Castle is through the East Gate (Otemon) and then the Karamon or Shiyakumon Gate. This beautifully decorated gate was once part of Hideyoshi Toyotomi's Fushimi Castle in southern Kyoto. This leads to a spacious courtyard planted with pine trees, to Ninomaru Palace (admission 600 yen) and the beautiful lake and garden created by the tea master and landscape gardener Kobori Enshu.

The Ninomaru Palace is divided into five buildings each with different tatami mat-floored waiting rooms. The decoration was meant to impress those seeking an audience with the shogun. The shogun's own chambers (Shiroshoin), on the other hand,are subdued, decorated with Chinese-style monochromes and resting sparrows. This is where the shogun slept and his female attendants waited on him.

Separate from the palace is a large kitchen complex.

The buildings are also noted for their impressive security measures: "nightingale" (uguisubari) floors in the wooden corridors separating the rooms, which squeak when walked on, and hidden rooms for bodyguards to keep close watch for any sign of treachery.

The Great Hall was the audience chamber where the shogun received his feudal lords or daimyo and has a raised seat where the shogun sat above his retainers. The floor is made from a single piece of keyaki (zelkova) wood and the sliding doors are elaborately decorated with paintings of pine trees. The ceiling is equally ornate with a gold background.

The Waiting Room (Tamari-no-ma) is noted for a door with a famous painting of a heron attributed to Naonobu Kano (1607-1650).

The Inner Castle or Honmaru was destroyed in 1788, during one of the Tenmei Period (1781-1788) fires that ravaged the mostly wooden Kyoto. It was replaced with a residence from Katsura Imperial Palace. 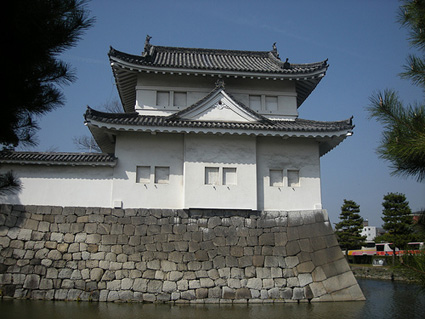 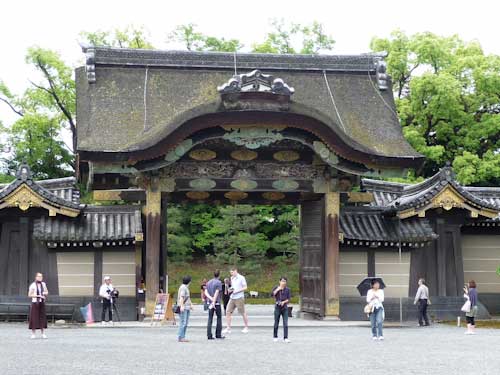 From Tokyo and Nagoya take the Tokaido Shinkansen to Kyoto Station and then transfer to the city subway for Nijo-Jo Mae Station. Buses #9, #50 or Raku Bus #101 also go to Nijo Castle from Kyoto Station. Kyoto city bus #12 also goes here from Shijo. 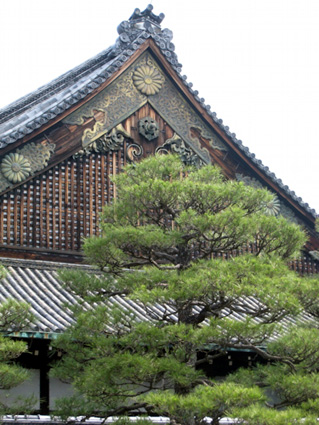 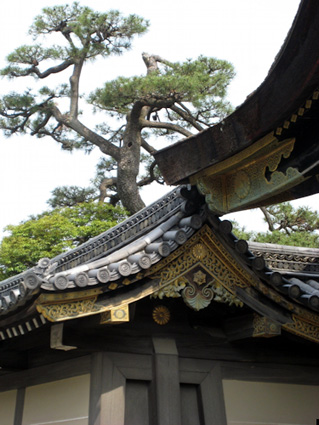 Accommodation near Nijo Castle in Kyoto

Nijo Castle is a convenient area to base on a visit to Kyoto as you are close to both the JR and subway stations, though most of Kyoto's attractions are to the east and north of the area. Just across the road from Nijo-jo is the international class ANA Hotel. Other options close to Nijo Castle include: the Kyoto Kokusai Hotel (formerly the Kyoto International Hotel), Kyoto Guesthouse Roujiya and Hoikawa Inn Hotel.