The Yamadera is a sprawling ancient Buddhist temple complex built onto a steep mountainside between Yamagata city and Sendai. The beauty of the building ensemble itself as well as the spectacular views offered from the structures - high up on the mountain - make the Yamadera one of the top spots to visit in Yamagata Prefecture. 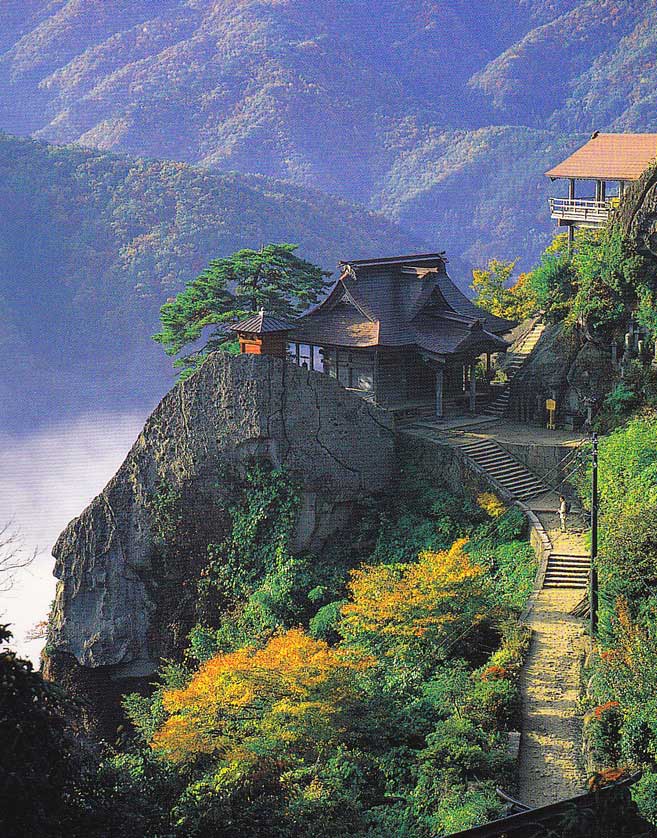 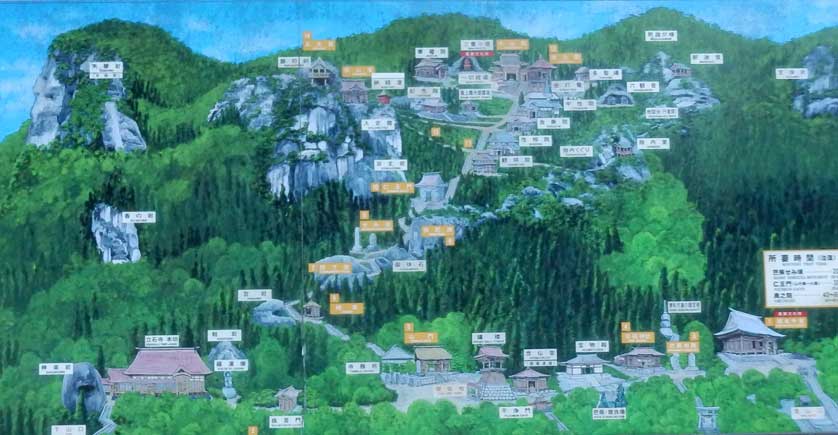 Yamadera Temple in Yamagata Prefecture is a sprawling temple complex

Though the Yamadera is administratively counted as part of Yamagata city, it sits deep in the surrounding countryside.

On the short walk from Yamadera train station towards the entry of the temple, you cross the Tachiya River. From the bridge, you get a good view of the mountainside of the Hoju-san rising up a few hundred meters ahead.

At the bottom is a road running parallel to the foot of the mountain, a road lined with eateries, souvenir shops and small inns. Dense forest hides most of the temple's structures higher up from view while large rock walls are clearly visible.

High up on the mountain however, you can clearly see the temple's most famous structure, the Godaido, a viewing platform originally constructed as a place to meditate over the beauty of the surrounding landscape. Today, the Godaido is the main tourist viewing spot of the temple, offering breathtaking views towards the valley below and the mountains beyond.

It is said that on the way up to the Godaido, you have to climb about 1,000 steps on the stone stairways leading up the mountain. But there is more to the temple than just the Godaido, much more. Take your time exploring it.

The lower level of the temple is at the foot of the mountain, though a set of stairs up from the merchant street. The Konpon Chudo is the Main Hall of the temple and its oldest structure, the Hie Shrine as well as a number of other historic buildings and monuments are also located here.

Many Japanese visitors offer prayers at the holy shrines here before beginning their ascent towards the higher reaches. Burning incense in front of the Konpon Chudo is a popular part of the journey. 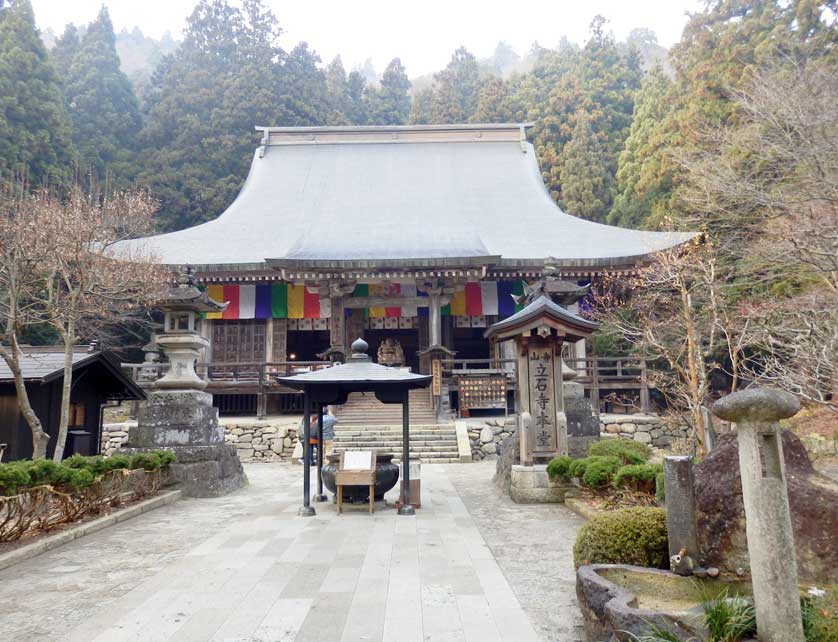 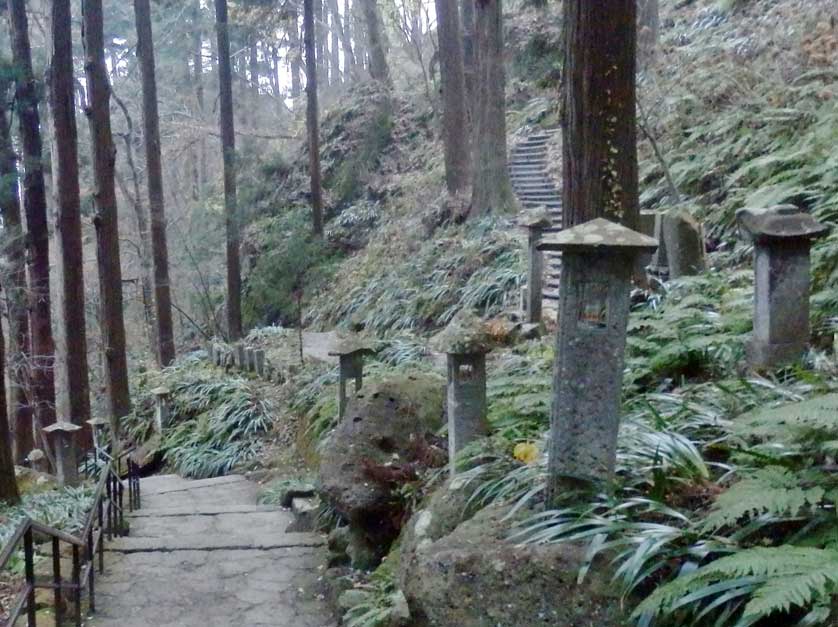 Yamadera translates as "Mountain Temple" and that is clearly a folksy name, descriptive but not rooted in the Buddhist religion. The official name of the temple is Risshaku-ji, belonging to the Tendai sect of Japanese Buddhism. It was founded in 860 A.D. by the monk Jigaku Daishi (794 - 864) as a branch of Enryaku-ji, the center of the Tendai sect, located on Mt. Hiei in Kyoto.

Jigaku Daishi is today most famous for his nine year pilgrimage to China about which he wrote numerous books still studied today. He also brought many historic Buddhist texts from China, now stored at Yamadera.

Inside the Konpon Chudo, a flame that Jigaku Daishi brought from Enryaku-ji can still be seen burning more than 1100 years later. According to legend, the monk Dengyo Daishi (767 - 822), the founder of both the Tendai sect and Enryaku-ji temple in Kyoto brought that same flame from a pilgrimage to China in 804 / 805 A.D. to Japan.

In a twist of history, the original flame at Enryaku-ji was extinguished when Oda Nobunaga destroyed the Enryaku-ji complex for being a hotbed of violent religious militancy in 1571. When Enryaku-ji was rebuilt, the flame was returned from Yamadera to Kyoto. 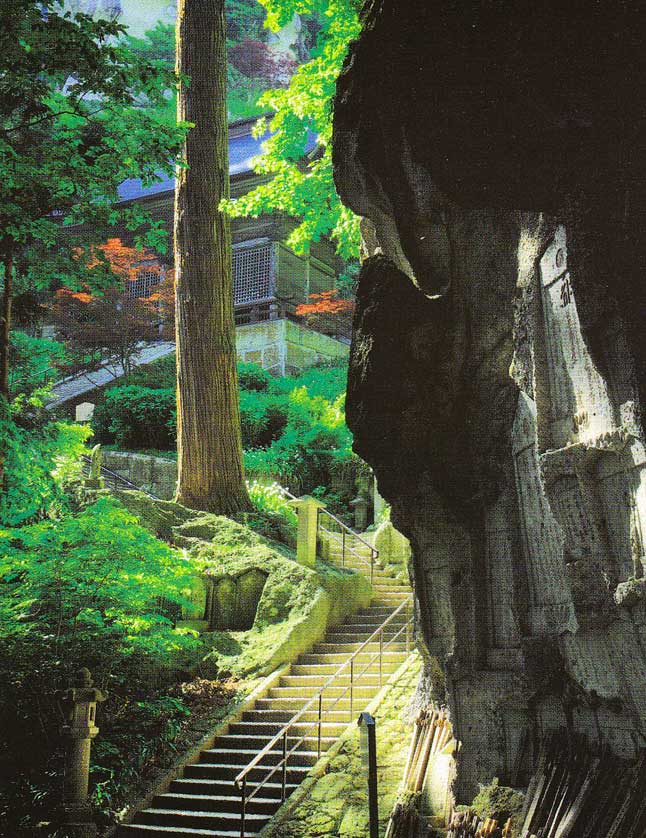 A toll gate marks the beginning of the stone stairway up. You need to buy a ticket to enter. The toll is also the place to buy postcards and various temple-issued lucky charms.

From there, the serious stairways start. They zigzag up the mountain through the cedar forest, flanked by ancient stone lanterns. Onto the rock walls close to the stairs, multiple memorial stone inscription tablets have been inserted. Stray paths lead to the more obscure sites, small stone Buddha figures in the woods, flanked by flags, marking ancient family burial grounds.

Walking up, the Niomon Gate eventually comes in view. It houses the nio, guardian gods in charge of keeping the demons out of the holy site.

Pass through the Niomon Gate and the upper reaches of the temple comes into full view. Daring wooden structures cling to the rocks high up on both sides of the stairway. The central area consists of temple stacked upon temple.

High up to the left, you see a rocky outcropping on which the three most-photographed wooden structures of the Yamadera have been built: the small Sutra Repository Tower, containing holy books, the Kaisando, the Founder's Hall dedicated to Jigaku Daishi and, a little higher up, the Godaido.

After taking in the superb views from the Godaido, there are still numerous temples further up the mountain to explore. 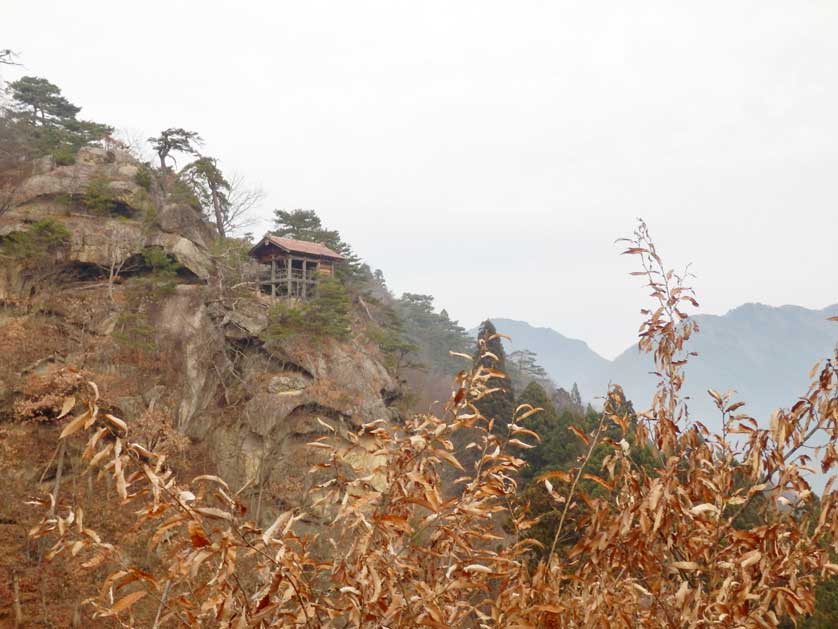 Matsuo Basho (1644-1694) is considered to be the most famous haiku poet of the Edo Period (1603-1868). From 1689 to 1691, he undertook a trip to the northern areas of Honshu about which he later wrote his classic travel account Oku no Hosomichi. Matsuo Basho was particularly smitten by the Yamadera and wrote some of his most famous poems here.

A stone statue of Matsuo Basho can be seen close to the Konpon Chudo; across the valley is a museum dedicated to Matsuo Basho's work. 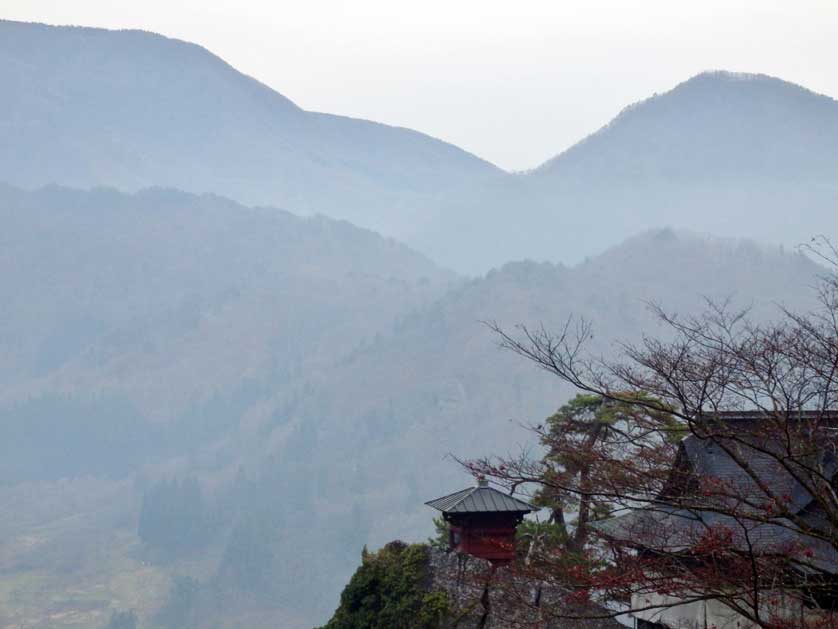 The Yamadera is located on the JR Senzan Line connecting Yamagata city with Sendai and has its own train station. From Yamagata to Yamadera Station the train takes about 18 minutes, from Sendai Station about 60 minutes. 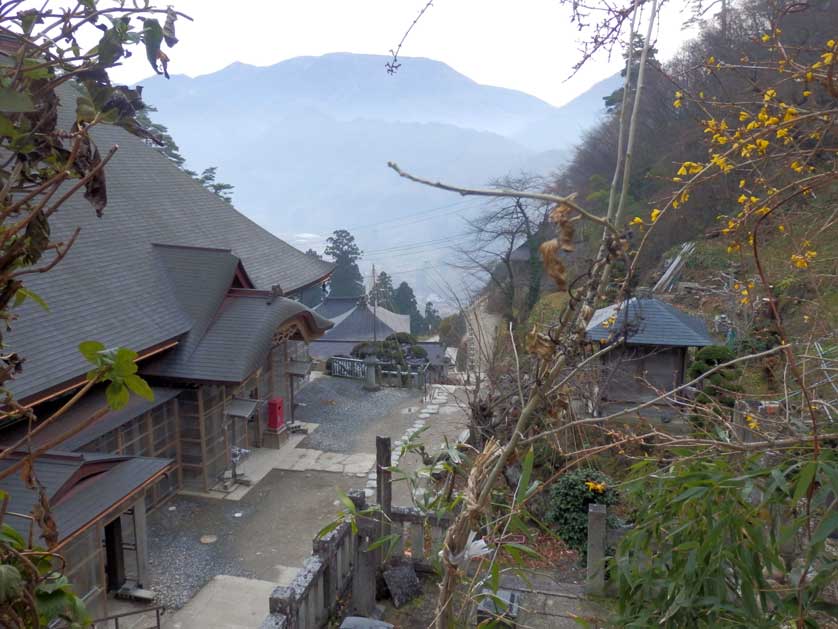 In the higher reaches of the Yamadera temple complex, Yamagata Prefecture

Opening times
April to November: 9.30 am to 4 pm
December to March: 10 am to 3 pm
Closed on Wednesday 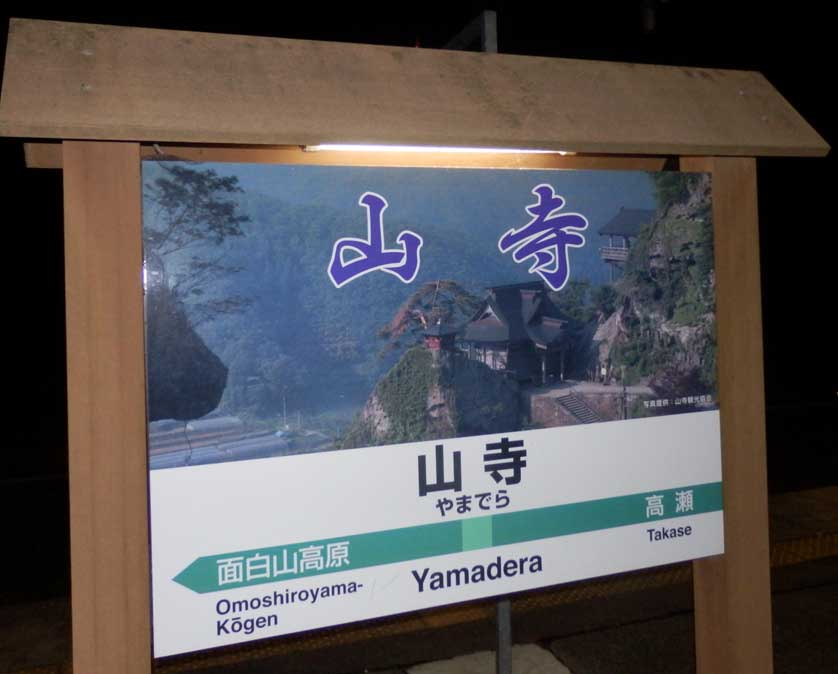 Opening times
Daily from 9 am to 4.30 pm, closed December 29th to January 3rd

Yamadera Temple (Risshaku-ji), in Yamagata Prefecture, is a Tendai-sect temple located deep in the mountains and is known for its spectacular fall colors.