For a peaceful but remarkable vacation, journey to the healing baths, crystal-like river, fragrant forests, historic temples, and sacred pilgrimage sites in and about Misasa Onsen and neighboring Mt. Mitoku in Tottori Prefecture.

A history of more than a thousand years of inspirational natural settings, purification ceremonies, and pilgrimages, make these spots unique, a uniqueness so extraordinary that the government listed the area as the first Japanese Cultural Heritage Property. But, located in a relatively unexplored part of Japan, Misasa gets few tourists. Visit tiny, exotic Misasa before it becomes as well-known and as crowded as Kyoto. 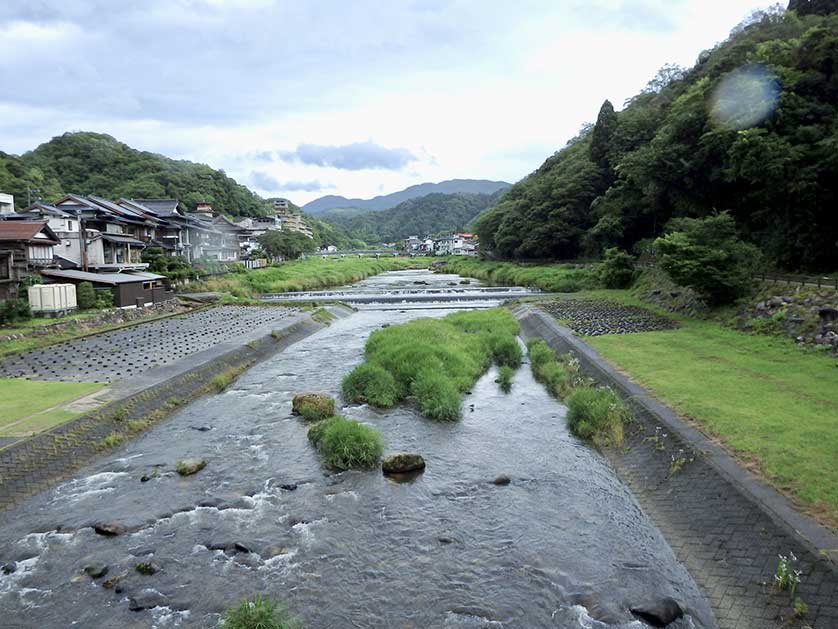 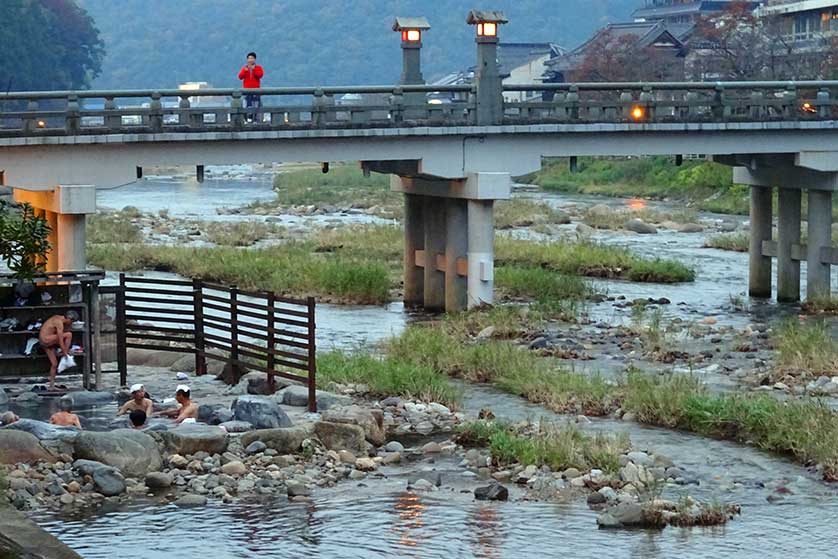 Misasa Onsen's history starts with a legend of a wolf and a samurai in the Heian Period (794-1185), when ancient Kyoto, then known as Heian-kyo, was the capital of Imperial Japan. The legend states that a samurai encountered an old white wolf on a pilgrimage to Mt. Mitoku to commune with nature and mountain spirits. He believed the wolf to be an incarnated god. Instead of killing the wolf as he might have done elsewhere in Japan, he left it alone.

While dreaming that night, a Bodhisattva told him where to find hot water gushing from under the roots of an old camphor tree. He journeyed to that spot, where he found the hot spring. Today, you can visit that fabled tree where thermal mineral water still pours from the earth. Statues of the samurai and wolf looking at each other stand nearby. 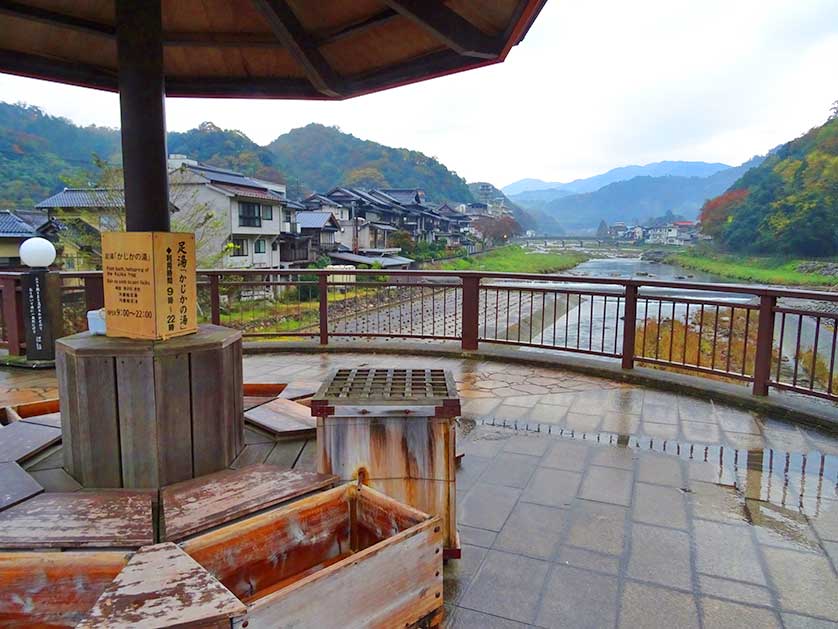 You need not be a legendary samurai, a white wolf, nor a pilgrim to enjoy the numerous minerals baths of this spa town.

Any bold bather can enter Kawaraburo, a free outdoor mixed-sex bath within view of passersby walking across Misasa Bridge, one of several small bridges spanning the Mitoku River, which flows from Mt. Mitoku.

If bathing naked in the middle of town is not your thing, more than a dozen Japanese ryokan and hotels in Misasa pipe hot mineral water into private bathing facilities. You have a wide choice of beautiful Japanese style buildings with scenic mountain and river views.

Strollers can warm their feet in several foot baths scattered around town. One of the best is Kajikanoyu. It is located on the middle of an old stone bridge a short walk from the town center. Sit and listen to the murmuring river while soaking your feet, watching herons search for food, or just spacing out and enjoying the graceful river edged with greenery. 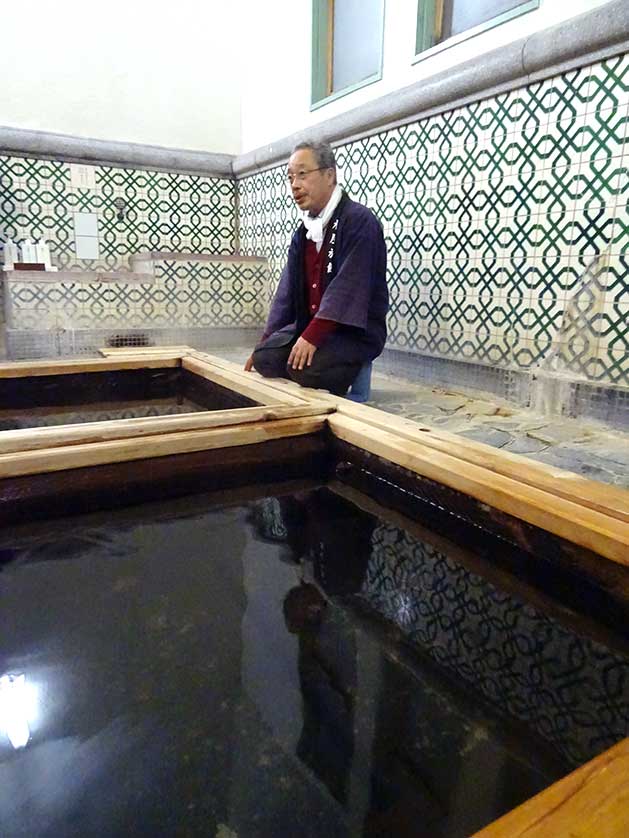 One of the most quirky hot spring ryokan in Misasa is Kiya Ryokan, an inn that specializes in hot spring therapy. Many guests stay several days to heal various ailments by bathing in the mineral water.

Guests drink it and soak in it, and they inhale the steam in a mist sauna under the guidance of Toshiro Mifune, who is a licensed hot spring sommelier and forest therapy guide. In addition to the sauna, this hotel has three private baths, a public bath for men, a public bath for women, and one that men and women share.

Kiya Ryokan has various rates depending upon the selection of room and meal plans. The lowest price is 13,000 yen per person. Check Kiya Ryokan's website for specifics. Day visitors can soak in the baths for 1,000 yen. The ryokan's vast collection of ancient dolls, antique furnishings, old photographs, and Japanese curios, bestow the atmosphere of a historical museum.

Toshiro Mifune enthusiastically boasts of the healing powers of Misasa Onsen. Misasa's mineral water reportedly contains the highest radon content of any spa in the world. Although many Westerners are wary of radon, many Japanese believe that it can boost the immune system, decrease joint pain, and increase metabolism.

The windows of Kiya Ryokan look out onto the Mitoku River, where kajika frogs live and call to their mates, a sound which Mifune san says also promotes health. The unusual frog's voices sound like birds calling to each other. After an evening summer bath, you can listen to the frogs sing and watch fireflies dance in the air along the Mitoku River. 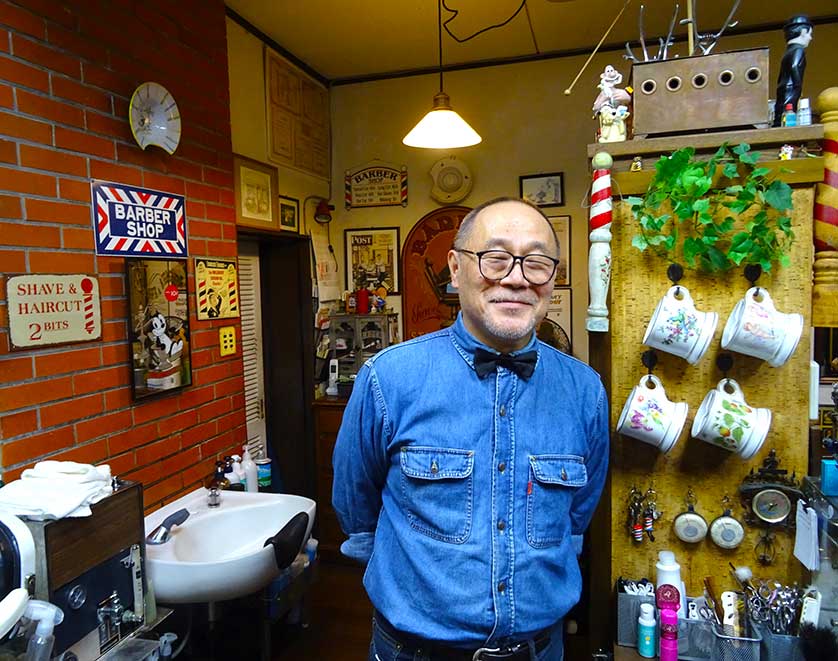 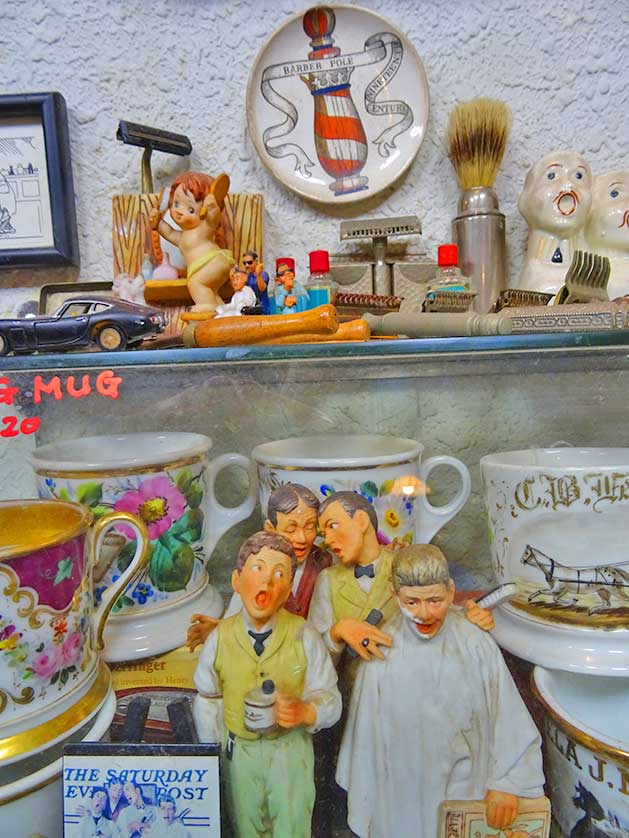 History and the Mitoku River both thread paths through Misasa. The Mitoku River runs parallel to a lane that locals call Showa Street. Tiny shops and galleries reflect the fashions and amusements of the Showa Period (1926-89).

Step into Kajikawa's Barbershop, and you will walk into a charming museum of barbering, where you can get a haircut and shave. Mr. Kajikawa loves to introduce visitors to the barbershop antiques in his shop. He regularly attends international meetings of collectors of barbershop goods.

Try out amusements from the Showa Period at Izumi Gorakujo, a colorful shop where you can knock old toys over with cork plugs from old air guns or play with traditional pachinko games.

Showa Street is probably the only place on earth with an art gallery of sculptures created from a variety of tofu called kouya doufu. Chefs from restaurants and ryokan in town competed to see who could be the most celebrated tofu artist. Their preserved artworks are on display behind glass. You can admire the creativity and skills of the tofu artists for free. The small gallery is one of several amusing galleries in town.

The kanji for Misasa (三朝) means three mornings. With so many attractions in and around Misasa, a three-day stay would be an excellent experience. 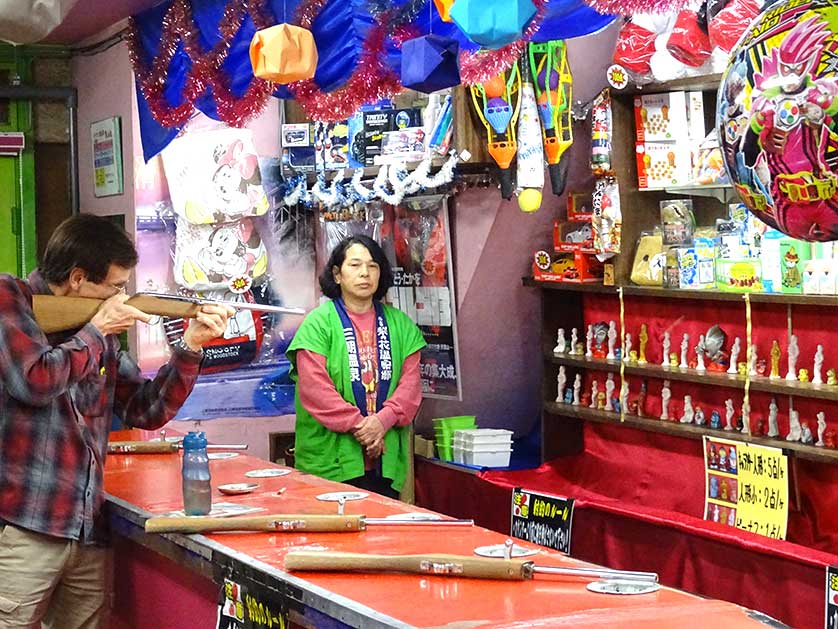 Misasa Onsen has a variety of hotels and ryokan all of which have their own hot spring baths. The four star Misasa Royal Hotel offers aromatherapy massages and is only 15 minutes from JR Kurayoshi Train Station on a free shuttle bus.

Misasa Onsen Toenkan is a traditional ryokan with English-speaking staff.

Mansuirou is an upscale ryokan with excellent food. The rooms have views of the river and there is free Wi-fi throughout the property.

Nakaya Ryokan has a free shuttle bus to the station and offers traditional Japanese rooms with tatami floors and futon bedding. A ganban (岩盤浴) hot-stone spa is on site.

Despite the remote location of Tottori Prefecture, Japan's efficient transportation infrastructure ensures that you can reach Misasa Onsen without spending much time from many places in Japan.

From Tokyo, you can fly from Haneda Airport to Tottori Airport. Board a bus straight for Misasa Onsen.

From Osaka and Kobe, Nihon Kotsu buses take less than three and a half hours to Misasa Onsen.

From Tokyo Station and Nagoya Station take a Japanese bullet train (shinkansen) to Kyoto Station and change to a Super Hakuto Express for JR Kurayoshi Station. Total journey time from Tokyo is around 6 hours by train (3 hours from Kyoto). This journey would be covered by the JR Rail Pass.

From Hiroshima Station, the quickest way to Misasa Onsen is to take a shinkansen to Himeji and change to the Super Hakuto Express. Journey time is around 3 hours, 30 minutes.

From JR Kurayoshi Station in Kurayoshi board a Hinomaru bus to Misasa Onsen. The same bus also goes to Mount Mitoku and Sanbutsuji Temple.

The author of this article blogs about Japanese Hot Springs at hotspringaddict.blogspot.jp.