Japan has several so-called "character trains" many of them dedicated to manga and anime characters, cute yuru-kyara and regional symbols such as ninja in Iga Ueno.

These colorful trains with specially designed liveries and interiors are often in scenic rural prefectures which are trying to attract some of the growing number of foreign tourists visiting Japan.

If the railway is operated by JR, visitors will be able to use the JR Rail Pass to travel on them.

The JR Anpanman train is a contemporary tribute to Takashi Yanase (1919-2013) the Kochi-born creator of the Anpanman children's manga and anime series and his various characters: Anpanman (with his red bean-paste head), his perennial rival Baikinman ("Bacteria Man"), Anpanman's ally Jam Ojisan and his many friends including Currypanman, Shokupanman, Creampanda, Melonpanna et al.

The Anpanman train is painted in a livery featuring the various Anpanman characters and the seats and headrests also feature an Anpanman theme. The Anpanman train runs across the Seto Ohashi Bridge from Okayama Station in Okayama in Honshu to Matsuyama in Shikoku on the Yosan Line. Another Anpanman livery trains run on the Dosan Line from Okayama to Kubokawa via Kochi and then along the Tosa Kuroshio Railway Nakamura Line to Nakamura in Shimanto. This route is one of the most picturesque in Japan and passes through the Iya Valley and Oboke Gorge areas. The third Anpanman train runs on the Kotoku Line linking the important cities and prefectural capitals of Takamatsu (Kagawa) with Tokushima (Tokushima).

The JR Rail Pass and the All Shikoku Rail Pass are valid on the Anpanman Trains, though express and Green Car supplements are payable.

Since 2011 the Aso Boy limited express train has been running, not surprisingly considering its name, to and from Mount Aso, the massive volcano in the middle of the island.

Its normal route is from Kumamoto city to Miyaji, and it operates on weekends and national holidays. However, since 2017 it now operates on the opposite side of Kyushu and runs from Beppu and Oita city up to Aso.

The trains mascot is a small black dog named Kuro, somewhat like the name "Blackie" in English. The exterior has more than 100 illustrations of Kuro in different poses and he also appears on the interior.

The Conan Train is often seen running along the JR Sanin Line (which runs from Kyoto to Shimonoseki) along the coast of Tottori, but can also sometimes be seen in Shimane on the same line.

Detective Conan is a massively popular manga and anime series from Japan that has also gained followers abroad. The original Japanese title "Meitantei Conan" literally means "Great Detective Conan," but because of copyright issues the English release goes under the title "Case Closed."

The hero of the manga and anime series is a genius detective named Conan Edogawa, who inhabits the body of a young boy. His name comes from Arthur Conan Doyle, the author of the Sherlock Holmes mysteries.

Conan was created by Gosho Aoyama who hails from Yura, a small town on the coast of Tottori Prefecture.

The Ichibata Electric Railway is a small private railway in the eastern part of Shimane Prefecture. The railway opened in 1914 with a line connecting Izumo city with Unshuhirata. Next year the line was extended to Ichibata.

In 1927 the line was electrified and extended as far as Shinjiko Onsen in Matsue, the prefectural capital of Shimane. A few years later an 8.3 km branch line was built connecting Kawato Station to Izumotaishamae Station. The railway is the primary method used for visitors to Izumo Taisha, a major tourist attraction in Shimane.

From 2014 two new trains have been brought into service. The first is known as the Shimanekko-go and is a two car 2100 Series train with new livery inside and out. Shimanekko is the Shimane prefectural mascot, formed by combining the two words Shimane and nekko, Japanese for cat.

The mascot is a yellow cat with a stylized shrine roof for a hat, signifying Izumo Taisha. As far as kawaii mascots go, Shimanekko seems to be popular, having survived a recent culling of  hundreds of less popular mascots from the huge population that Japan has spawned.

One end of the train features the Yamata no Orochi, a mythical serpent from Japan's ancient text, the Kojiki

Several years ago the JR Sanko Line, a small rural train line that runs from the Japan Sea Coast at Gotsu in Shimane along the Gonokawa River to Miyoshi in the mountains of Hiroshima, was re-branded as the Iwami Kagura Line.

The Iwami Kagura Line runs through the heart of what was the province of Iwami, which is home to a unique type of kagura, a form of sacred dance theater.

Each of the 35 stations on the 108 km line was named after a dance from the Iwami Kagura repertoire and a colorful sign erected with a photo from that particular dance as well as the story behind the dance.

The Misuzu Shiosai Train is a scenic view, tourist train running a round trip once a day, from Shimonoseki Station in Shimonoseki at the southern tip of western Yamaguchi, up the coast of the Hibiki Nada Sea, and round to Senzaki in Nagato on the Japan Sea Coast.

The unusual and stylish exterior sports an Art Deco paint job and includes triangular and octagonal windows. The interiors are also fashioned in 1920's style and one car features sofa seating facing out to enjoy the sea view. The trains design was by Nagato City Art Director Shingo Ozaki. 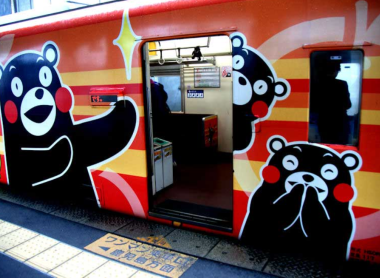 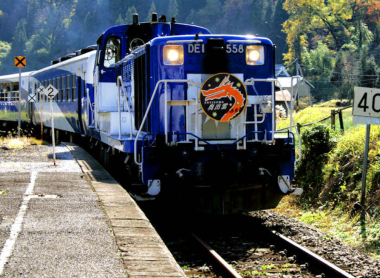 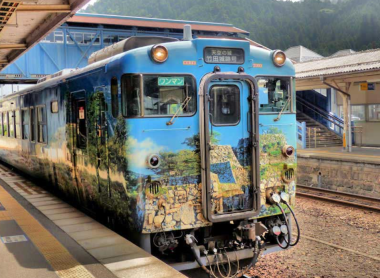 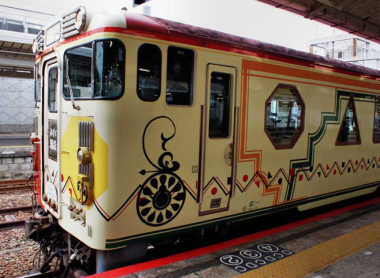 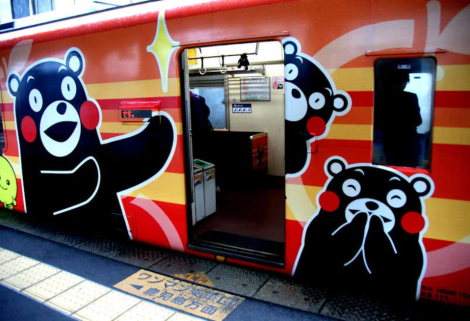 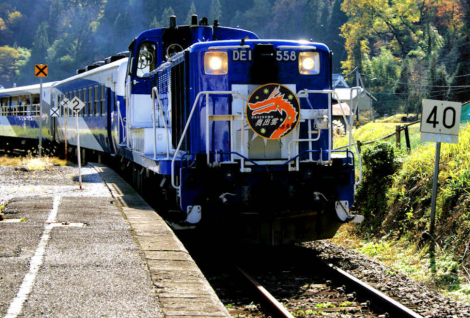 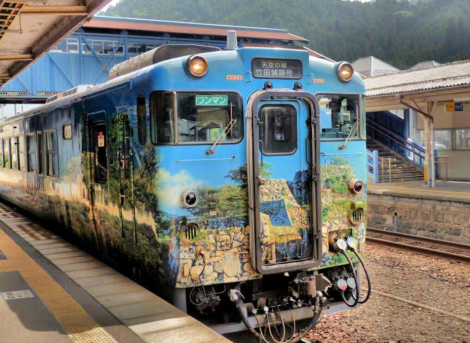 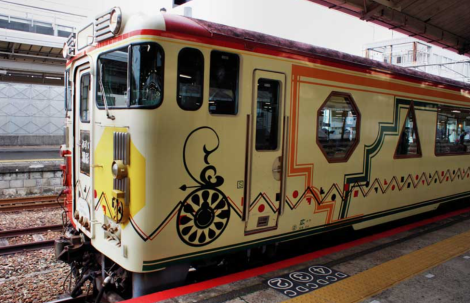 The Okuizumo Orochi train offers a relaxed and scenic train ride through remote mountains and valleys in an open car.

The JR Kisuki Line begins at Shinji Station on the main JR Sanin Line on the shore of Lake Shinji, the 7th largest lake in Japan.

Starting at almost sea level the Kisuki Line heads south through the remote and mysterious Oku Izumo region climbing slowly until it reaches more than 700 meters above sea level and then joins up with the Geibi Line at Bingo Ochiai, from where trains run all the way down to Hiroshima via Miyoshi or to Niimi in the mountains of Okayama.

The Orange Hisatsu Railway is a private railway that runs 117 kilometers between Yatsushiro in Kumamoto and Sendai in Kagoshima.

Hisatsu is derived from the old names for Kumamoto Prefecture and Kagoshima Prefecture, Higo and Satsuma.

Some of the trains on the railway have external decorations, the most popular being three trains that sport different Kumamon designs.

Kumamon is the mascot character for Kumamoto and is based on a black bear. It is one of the few local mascots that have become popular outside their own areas and has spawned a large number of Kumamon souvenirs and paraphernalia.

The Bantan Line gives access to Takeda Castle Ruins, a popular tourist destination located on a mountaintop in the middle of Hyogo Prefecture. Takeda Castle is referred to as "The Castle in the Sky" due to its appearance when it is viewed rising above a sea of mist in the autumn in a weather phenomenon known in Japanese as unkai.

One train on the line has been renovated and decorated to advertise the castle. A single car KiHa-40 series it is named "Sky Castle" and has an exterior painted with images of the castle ruins.

One side of the interior has had the normal seating replaced with comfortable seats that face outwards, so allowing glimpses of the castle on its journey. There is no extra charge to ride the train and reservations are not possible.

The Wakayama Electric Railway (Dentetsu) is a private railway that operates just one line, the 14.3 kilometer long Kishigawa Line that runs from Wakayama city to Kishi in nearby Kinokawa.

The train line and especially Kishi Station has been made famous and become a tourist draw because of Tama-chan, the feline stationmaster.

Since 2007 a calico cat had been named station master, and her main duties seems to have been sleeping while wearing a station masters cap. Apparently this was enough to attract the attention of millions of cat fans who made the journey just to see her, and while they were at it purchase plenty of Tama-chan merchandise in the station shop.

In 2015 Tama-chan passed away and a shrine has been built for her at Kishi Station, however, several years earlier a second calico cat, named Nitama, had been installed at Idakiso Station and following the original Tama-chan's passing has now been promoted and moved to Kishi Station and is now known at Tama II.

The JR Sakai Line is a small, single track branch line in Tottori Prefecture only 18 kilometers long. It starts at Yonago Station on the Sanin Line and ends at the port town of Sakaiminato, with another 14 stations in between including one for Yonago Airport.

Sakaiminato is a virtual mecca for fans of yokai, Japanese monsters, because it is the hometown of Mizuki Shigeru, the author who almost single-handedly revived interest in traditional monsters through his influential manga and anime, most notably GeGeGe no Kitaro.

The Yoro Railway (Yoro Tetsudo), is a small subsidiary of Kintetsu Railways that operates a single line, just under 60 km in length, that connects Kuwana in Mie Prefecture with Ibi in Gifu Prefecture. Trains on the Yoro Line are decorated with characters representing the localities the line passes through.

Take advantage of your Japan Rail Pass to ride some of them !

Yufuin no Mori from Fukuoka to Yufuin and Beppu