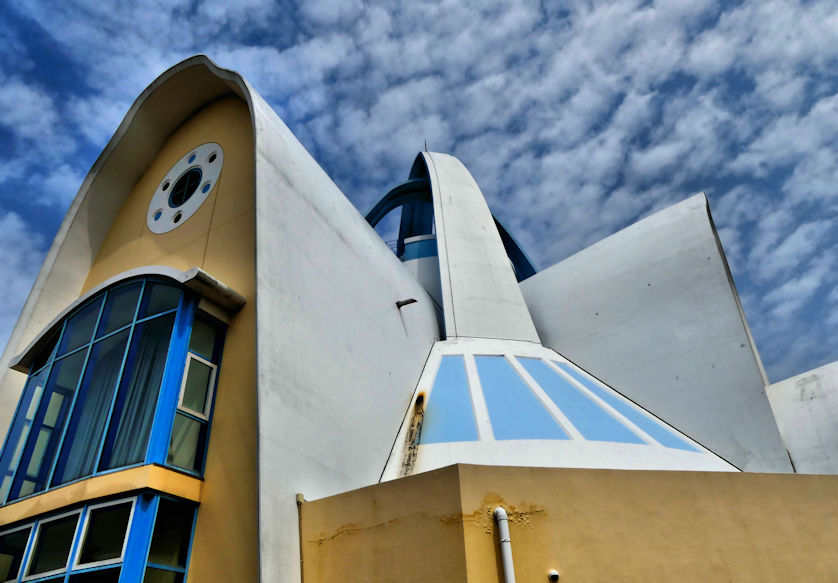 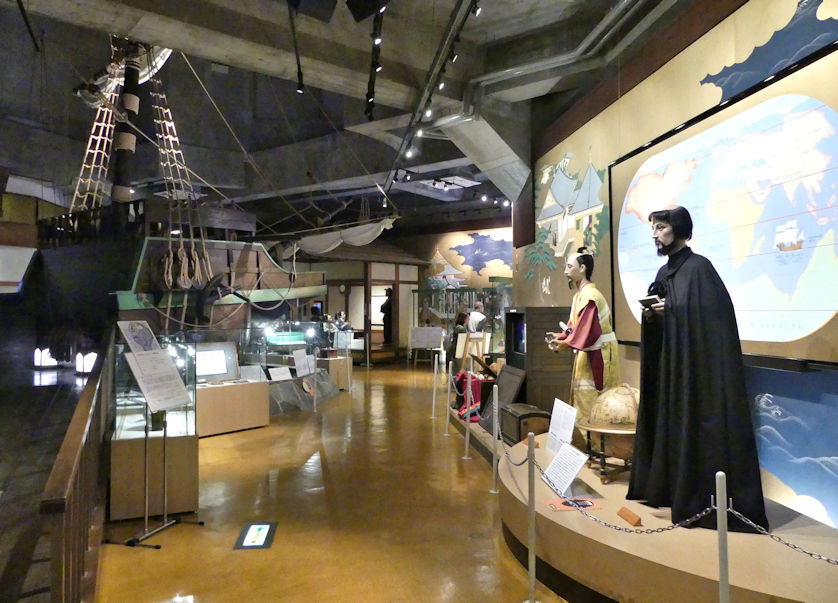 Interior of the Shiro Amakusa Memorial Hall including a reproduction of the bow of the Golden Hind, the English ship captained by Sir Francis Drake

The Amakusa Islands are a group of islands that lie between Kumamoto and Nagasaki prefectures.

Like large parts of southern Kyushu, most famously Nagasaki, the islands have played a major part in the history of Christianity in Japan, being an area where the so called "Hidden Christians" practiced their faith in secret for centuries.

The islands were also  a large part of the Shimabara Rebellion (島原の乱; Shimabara no Ran) of 1637-1638, the Christian-led uprising that was the  last major military attack on the rule of the Tokugawa Shogunate until the Boshin War of 1868-69. 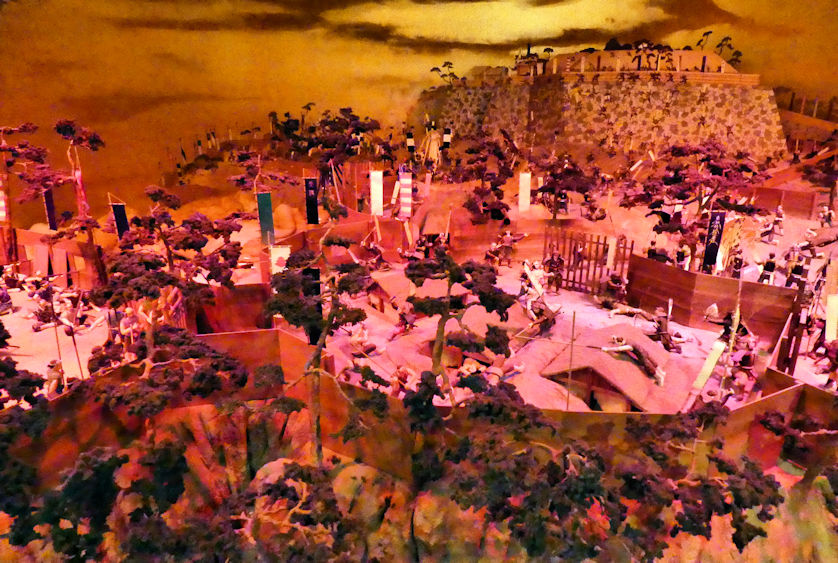 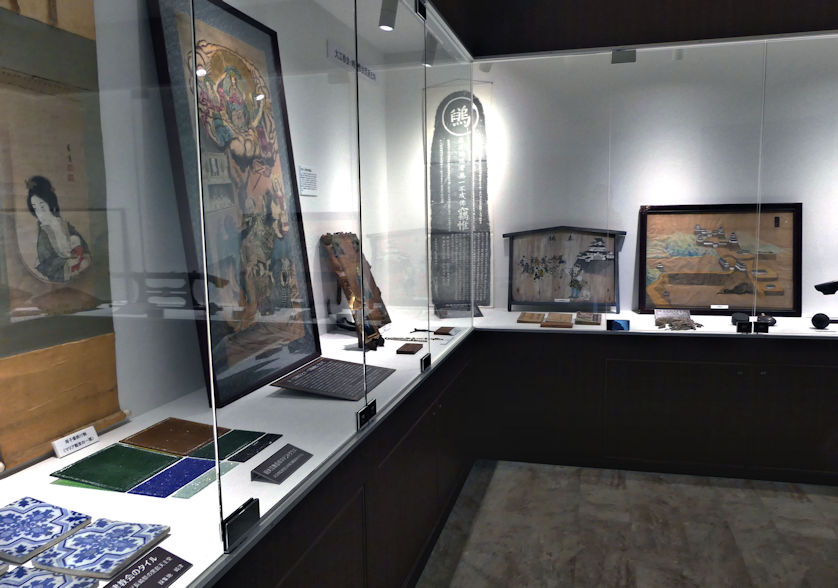 Brief History of Christianity in Japan

Christianity can be said to have  arrived in Japan in the person of St. Francis Xavier. Xavier and his missionary colleagues were quite successful in converting Japanese people to Christianity in various parts of Japan, but most successfully in Kyushu, which was geographically the main point of contact between the Europeans and Japan.

While there were certainly many genuine conversions to the new faith, pragmatism also played a large part. The 16th century in Japan was part of what is known as the Warring States Period.

There was no real central government and across the country hundreds of warlords were engaged in expanding their territory militarily, or in consolidating their defenses. Some of the Kyushu warlords embraced Christianity because it gave them access to European technology and a lucrative trade which contributed to their power. Often after officially converting these lords would force their populations to convert en-mass with some lords actively destroying Buddhist temples and Shinto shrines.

Nagasaki was itself an almost independent Jesuit colony, though that independence did not last long. As the 16th century drew to a close the country began to come under centralized control, first under Oda Nobunaga and then Toyotomi Hideyoshi.

Hideyoshi distrusted the Christians and in 1587 issued an edict ordering the missionaries out of the country. This was largely ignored and so in 1596 Hideyoshi crucified 26 Japanese and foreign Christians in Nagasaki.

The Tokugawa who succeeded Hideyoshi issued even stricter edicts eventually expelling from Japan all foreigners except for a few Dutch and English traders, and brutally suppressing native Christianity.

At this time groups of Japanese Christians in the more remote areas took their faith underground and practiced their religion secretly. Known as Hidden Christians, kakure kirishitan in Japanese, their existence remained unknown until 1865 when a small group of them turned up at the new Oura Church established in Nagasaki for foreigners after the re-opening of Japan. However, these Japanese Christians underwent some suppression and torture until 1873 when the ban on Christianity was finally lifted. 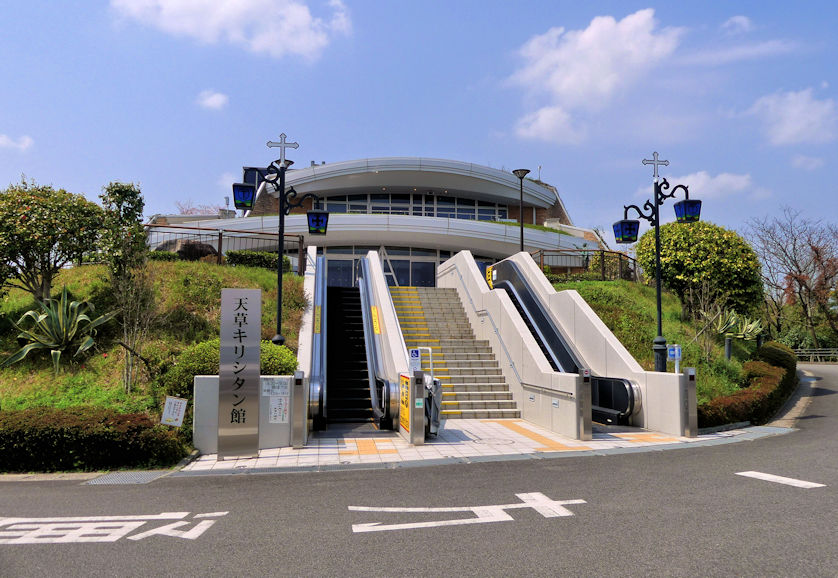 Amakusa Christian Museum in Hondo, Amakusa is a modern museum documenting the turbulent history of Christianity in the Amakusa Islands

The story of Christianity in the Amakusa Islands pretty much mirrors that of Japan as a whole. Many islanders became Christian quite early on after being visited by the Portuguese Jesuit Luis de Almeida in 1566.

In 1588 control of the islands was given to Konishi Yukinaga who grew up in a Christian family and so might well have been baptized as a child.

Konishi led one of the two armies that spearheaded Hideyoshi's invasion of Korea. Following Hideyoshi's first edict against Christianity in 1587, the Jesuits in Nagasaki decided to relocate the Collegio to the more remote Amakusa Islands where it would draw less attention.

The Collegio was a kind of university that also had a modern printing press that produced hundreds of books. The Amakusa Collegio Museum is located in the south of Shimoshima Island and features a full size replica of the Gutenberg press and displays of materials relating to the Collegio.

In the Battle of Sekigahara in 1600, fought to decide who would succeed Hideyoshi in ruling Japan, Konishi Yukinaga was on the losing side.

He refused to commit suicide as it was against his religion, and so was executed. Control of the Amakusa Islands was given to vassals of the Tokugawa and they began to severely oppress the population with heavy taxation and such, causing unrest to ferment.

Later the native Christians came in for harsh suppression and this proved to be the final straw. In 1637 the people of the Amakusa Islands as well as those of the neighboring Shimabara Peninsula who were in a similar situation rose up in armed rebellion. 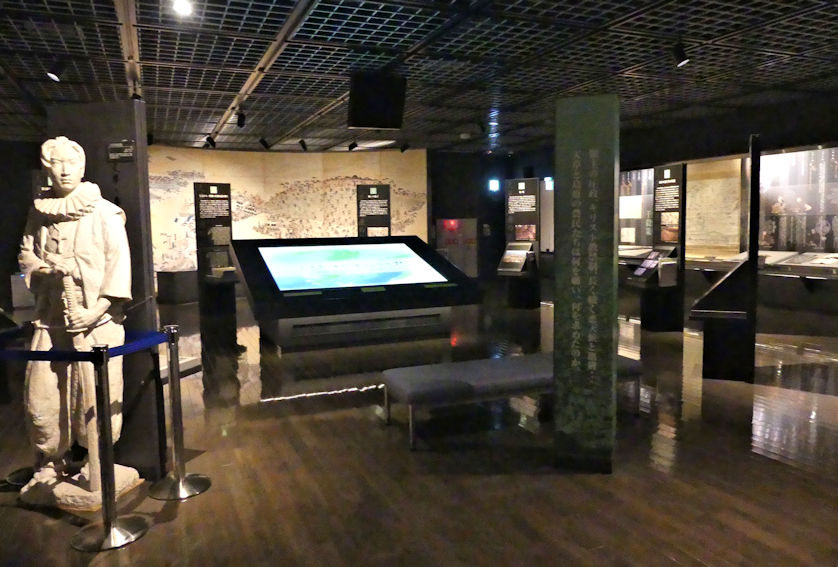 One of the exhibition rooms in the Amakusa Christian Museum

Along with the peasants there were also numerous ronin and samurai who had lost their positions when their lords were dis-empowered.

At first the rebels had several military successes. However the Shogunate amassed a massive army of around 120,000 men against the approximately 40,000 rebels. The rebel forces were led by a 16-year-old samurai now known as Shiro Amakusa, and it was decided to make the decisive battle at Hara Castle on the southern coast of Shimabara.

The outcome was unsurprising, and the government executed all the surviving rebels, both Christian and non-Christian, possibly up to 37,000 in total.

There is no space here to cover the rebellion in depth, but interestingly the campaign was one of the few instances where there is documentary evidence of the famed samurai swordsman Miyamoto Musashi having taken part in a military battle. Also of interest is the fact that the rebel forces at Hara Castle were bombarded from the sea by a Dutch ship sent from Nagasaki.

The suppression of Christianity after the rebellion was absolute and total, and this was when many of the Japanese Christians, especially those in remote communities like on the Amakusa Islands, chose to become "Hidden Christians".

Two villages in the south of Shimoshima, Sakitsu and Oe, both had communities of kakure kirishitan, and the villages now are home to churches built in the 1930's.

Sakitsu is a picturesque fishing village, and Oe is a hilltop village with great views. Both churches are now part of the UNESCO World Heritage Sites of Hidden Christians in Nagasaki and Amakusa.

Hara Castle is also included in the World Heritage sites, and though not in Amakusa, is actually close by and easily accessible from the islands.

There are a couple of museums on Amakusa where one can explore this rich and little known part of Japanese history. 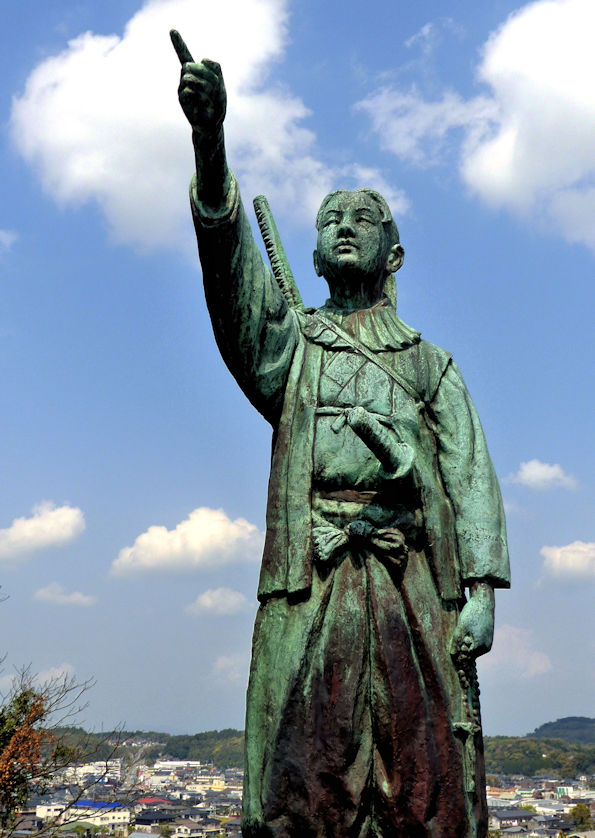 Housed in a striking building overlooking the beach on Oyano Island, this museum is devoted to Christian history of Amakusa, the “Hidden Christians”, the Amakusa-Shimabara Rebellion, and imported European culture of the 16th century. This is known as nanban, “southern barbarians” in Japanese.

The museum's collection was recently expanded with the purchase of several hundred artifacts, though there is little information in English.

A small pamphlet in poor English is available. One of the more curious displays is a large scale replica of the bow of the Golden Hind, the English ship that was sailed around the world by Sir Francis Drake. The ship probably passed to the south of the Japanese Islands during that journey but there is no record of it ever having visited Japan.

Shiro Amakusa Memorial Hall is just a few minutes walk from where the express bus that runs between Kumamoto and Hondo stops. The local bus from within the islands also stops here. 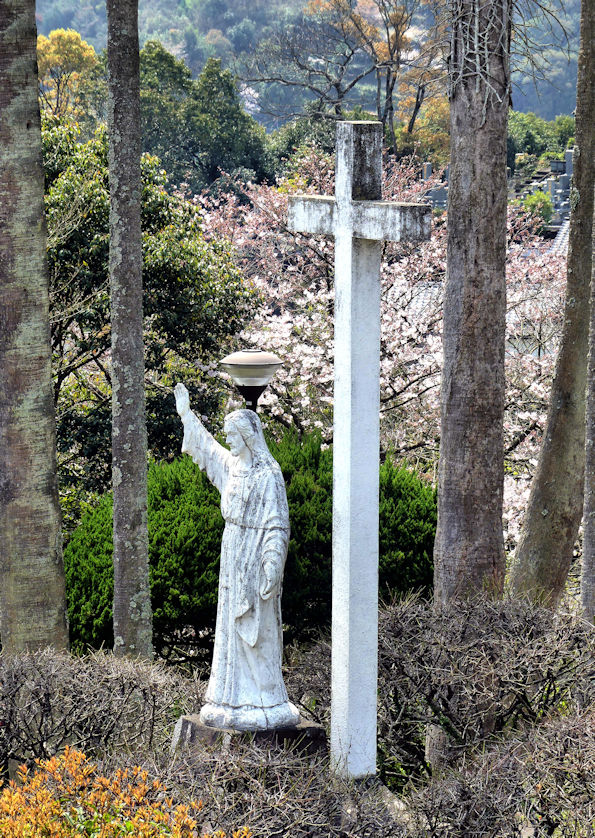 Located on a hilltop overlooking Hondo, the biggest city in the Amakusa Islands, this was the site of the castle that overlooked the area.

This modern and spacious museum has displays and artifacts that cover the introduction of Christianity to the islands, the Amakusa-Shimabara rebellion, and the era of Hidden Christians.

Perhaps the most notable exhibit is the actual  banner used by the rebels at the final battle of the rebellion at Hara Castle. The museum has a small theater showing videos including one in English, and they have an English language pamphlet.

A park directly in front of the museum is a favorite spot for locals during the cherry blossom viewing season. Also within the park is a small Christian cemetery.

Down below in the old part of town is the Gion Bridge, believed to be the largest stone bridge in Japan and therefore registered as an Important Cultural Property. It was built in 1832, and at this spot two centuries earlier was a battle during the rebellion that it is said caused the river to run red with blood. 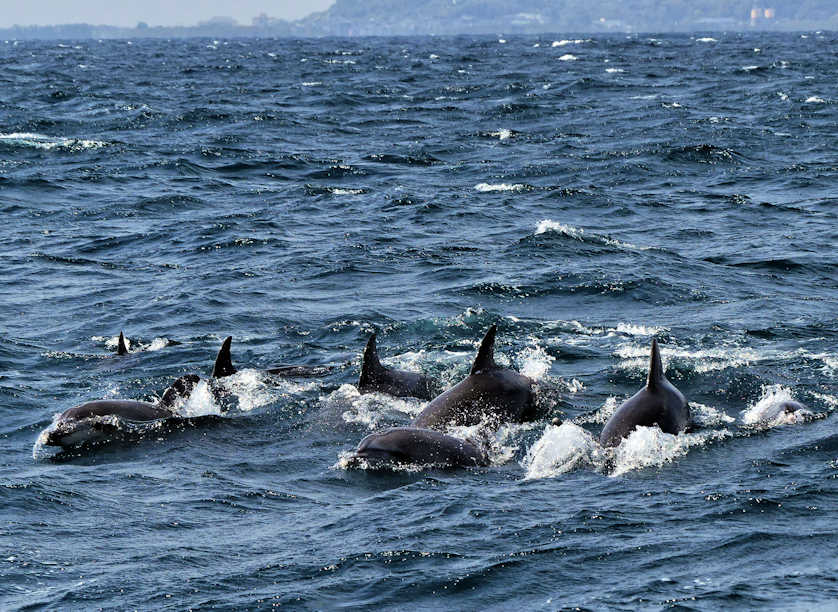 The Amakusa Islands have much more to offer visitors than just its Christian heritage, with the best known probably being dolphin watching.

Also near the southern tip of the Shimabara Peninsula, and just a short ferry ride from Amakusa is the World Heritage Site of Hara Castle where the final battle of the rebellion took place. 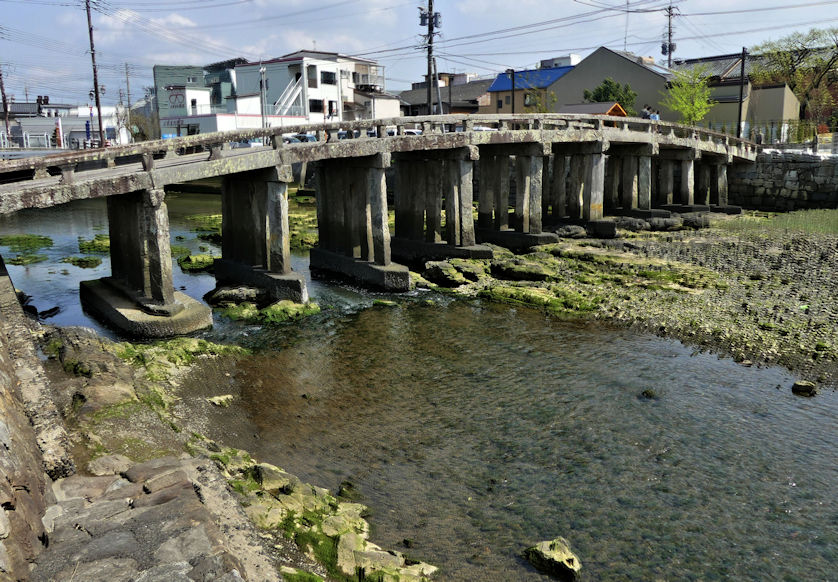 The Amakusa Islands can be reached by air. Amakusa Airport located on Shimoshima Island has flights to Fukuoka, Kumamoto and Osaka Itami airports.

There are frequent ferries from Kuchinotsu Port on the Shimabara Peninsula to Oniike Port on Shimoshima Island. There is also a ferry from Kuranomoto on Nagashima Island to Ushibuka Port on the southern tip of Shimoshima. Kuranomoto has buses to Izumi Station on the Kyushu Shinkansen between Hakata Station and  Kagoshima Chuo Station.

There are direct highway buses from Kumamoto Station, and Kumamoto Bus Terminal to Amakusa via Ueshima and Oyano islands. The journey takes about 2 hours and 25 minutes.

Local bus or rental car is the best way to get around the islands themselves.

Nagasaki City Highlights What to See and Eat In Nagasaki

Nagasaki city highlights: read an in-depth travel guide on what to see and where to eat in this historic, port city on the west coast of Kyushu.