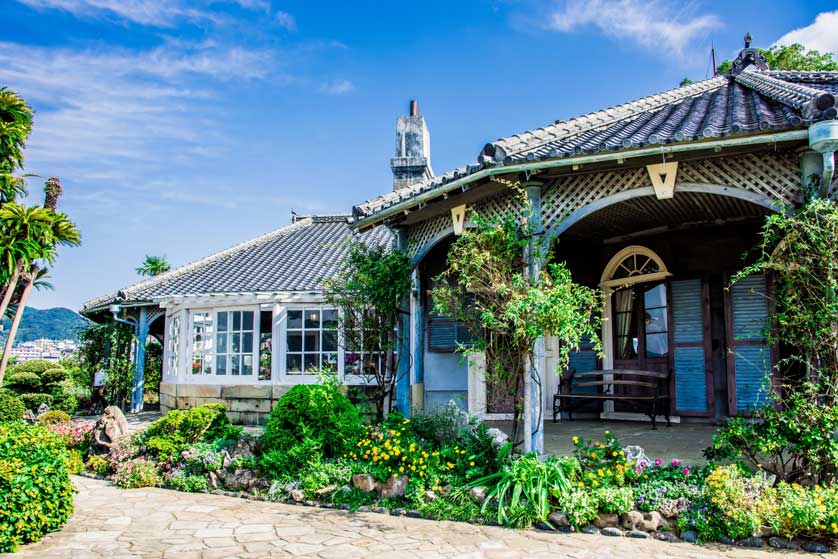 The Glover Garden area in Nagasaki is a collection of western homes and buildings reassembled around the house of the Scottish entrepreneur Thomas Blake Glover (born Fraserburgh, Scotland 1838 - died in Tokyo 1911).

Glover came to Japan at age 21 and never left. Glover worked in shipbuilding, coal (including opening up the mining island of Gunkanjima), arms dealing and brewing, ultimately being awarded the Second Class Order of the Rising Sun. Glover supported the opposition to the Tokugawa regime and was well placed when they came into government in 1868.

The house and grounds of Glover Garden sit atop a hill that commands a view of the Nagasaki Bay and the entire city - and speak of a bygone era of fabulous luxury, when the area of Minami-yamate was a thriving foreign settlement. Indeed the house is believed to be the setting and inspiration for Puccini's opera Madame Butterfly. 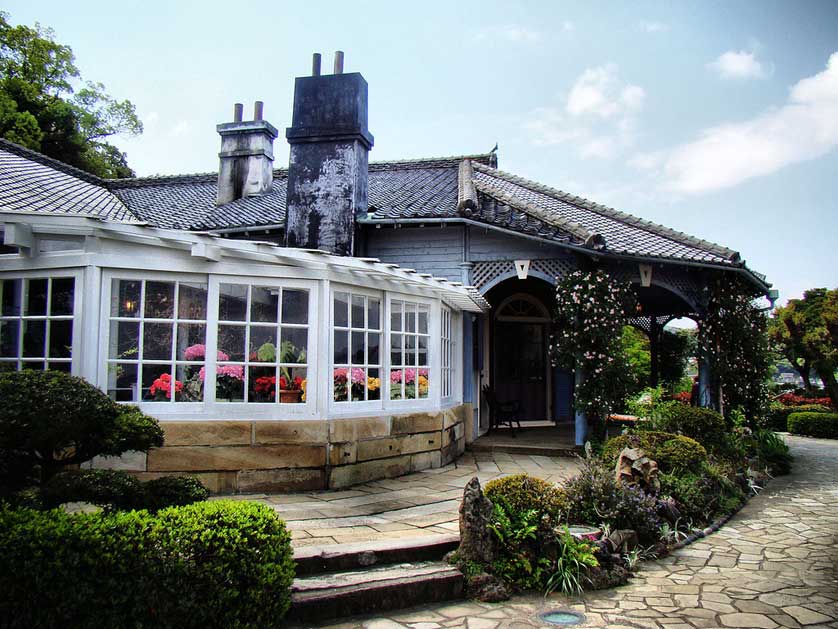 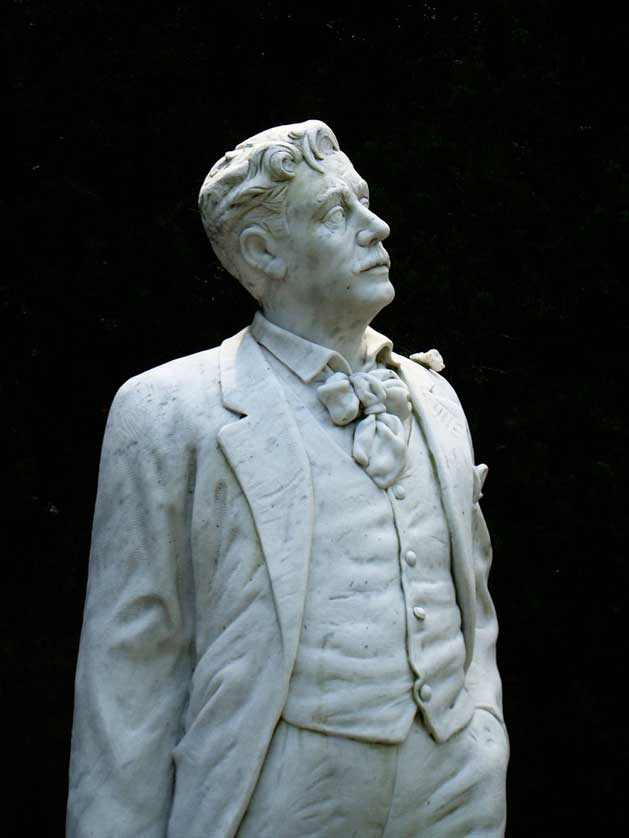 Statue of Puccini at Glover Garden Nagasaki; note the butterfly on his left shoulder

Buildings in the complex include the Former Mitsubishi No. 2 Dock House, a classic example of Meiji-era western-style architecture, dating from 1896. Here crews would rest up while their vessels were under repair.

Other Meiji-period buildings include the Former House of the President of the Nagasaki District Court, built in 1883 and the Former Walker House, the residence and garden of Robert N. Walker Jr (1851-1941), a drinks' magnate who produced "Banzai Cider" and "Banzai Lemonade" in co-operation with Glover and who was also active in the shipping industry. The house originally stood close to Oura Catholic Church and has a Japanese-style roof.

The Former Ringer House, with its foundation stones brought from Vladivostok was built by Frederick Ringer (1840-1908) a British businessman with interests in the tea trade and construction in Japan.

The Former Alt House, is a mainly wooden home built for William Alt (1840-1905), a tea tycoon, who with his Japanese partner Kei Oura exported green tea from Kyushu to amass a considerable fortune.

The Former Steele Memorial School was first built in 1887 in the hills of the Higashi-Yamate district of Nagasaki. There is an original photograph of the Glover family on the first floor and the second floor has an exhibition of wood-block prints of western-style houses in Nagasaki by Ken Tagawa. 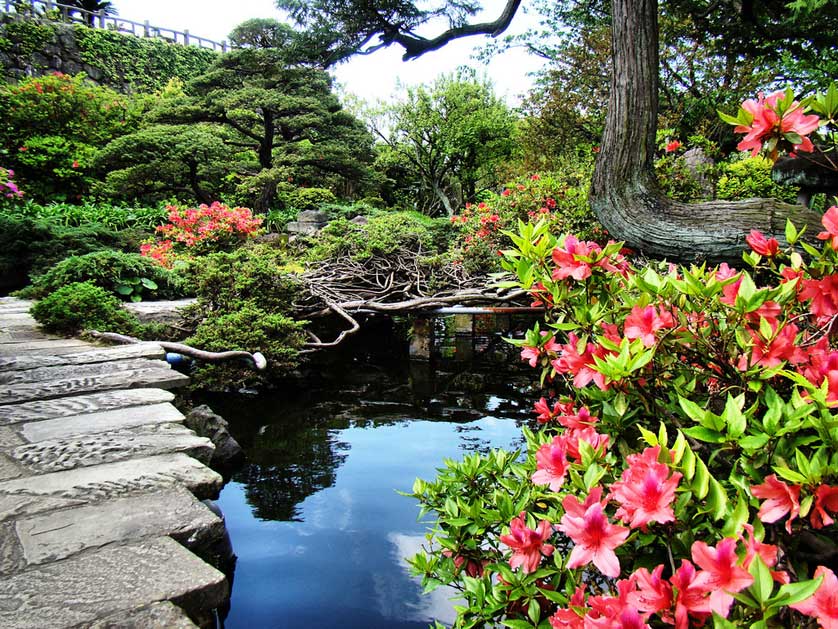 Other places of interest in Glover Garden are the Statue of Tamaki Miura (1884-1946), a Japanese opera singer famous for her portrayal of the heroine Cio-Cio-San in Puccini's Madame Butterfly. Visitors can also admire the first asphalt road ever constructed in Japan along with site of the very first lawn tennis court ever laid out in the country, complete with the original stone roller! The stone Old Hong Kong & Shanghai Bank Building is now a museum dedicated to Nagasaki's interactions with the West.

The Jiyu-tei is said to be Japan's first western-style restaurant and opened at the end of the Edo Period near Irabayashi Shrine. It is still going strong as a cafe in Glover Garden serving western-style food.

The centerpiece however is the Former Glover House, which is the oldest Western-style wooden building in Japan and has a fascinating display of some of Glover's furniture and personal effects including his walking stick and fishing rods. Glover lived in the house with his Japanese wife Tsuru, a former geisha, and his son from a former relationship, Tomisaburo. Tomisaburo was to lead a difficult life during World War II and committed suicide just weeks after the atomic bomb was dropped on Nagasaki.

The price of admission to Glover Garden also includes entry to the Museum of Traditional Performing Arts which displays colorful floats, costumes and dragons used in the Kunchi Festival held annually in October. Visitors can see a video on a large screen of the festival and there is also a museum shop here.

The pretty gardens surrounding the buildings contain a 300-year-old Sago palm given to Glover by the lord of Satsuma domain for his help in providing ships to the Satsuma clan during its struggles with the Tokugawa domain. 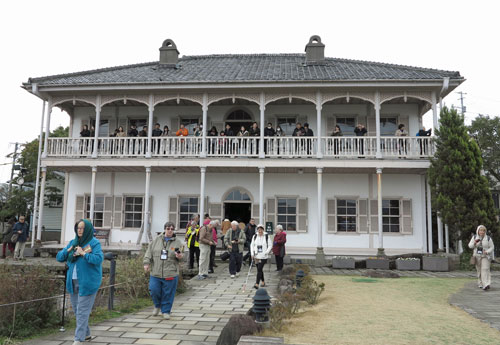 Glover Garden is located close to Ouratenshudoshita tram stop on tram line #5 in the south of the city close to Oranda-zaka (Dutch Slope), the Oura Catholic Church and the Confucius Shrine. Also in this area is the brick former British Consulate in Nagasaki and a number of other western-style houses.