Toshodaiji Temple, in Nara, was founded in 759 by the Chinese monk, Ganjin, and is a UNESCO World Heritage Listed site.

Toshodaiji Temple located south of Heijo Palace Site in Nara, just north of Yakushiji Temple, is an important temple in the history and development of Buddhism in Japan during the Nara Period.

Toshodaiji, a UNESCO World Heritage Site, is a large temple complex and is the headquarters of the Ritsu sect of Japanese Buddhism. Toshodaiji contains the tomb of the influential Chinese monk, Ganjin, the temple's founder. Most of the buildings at Toshodaiji are designated as National Treasures due to their age and architectural significance. 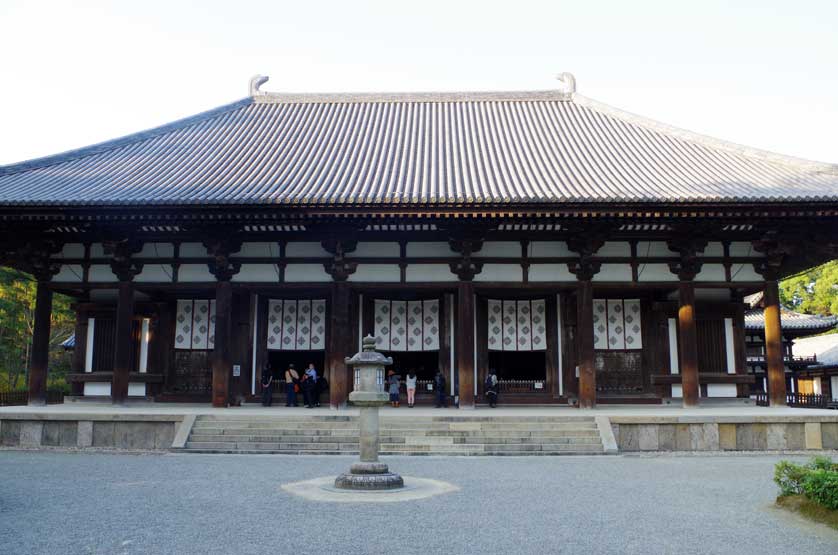 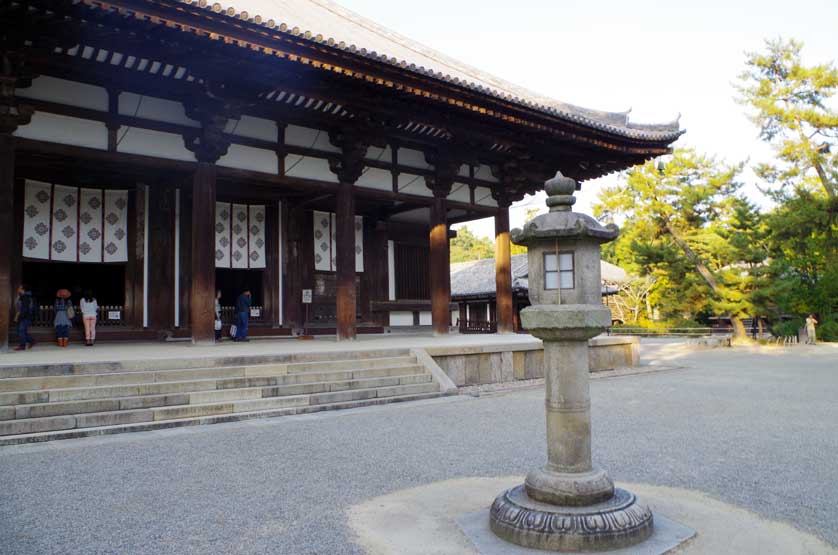 The first kanji character (唐) of the name Toshodaiji (唐招提寺) refers to Tang dynasty China and thus to the Chinese monk Ganjin (688-763), also known as Jianzhen.

Ganjin made several attempts to visit Japan, sadly becoming blind due to an infection during one of them, before he was finally successful on his sixth attempt. The full name of the temple could be read as "temple established by the one invited from China."

Ganjin had been asked to teach the Imperial Court in Nara by Japanese Buddhists studying in China and when he finally completed his journey to Nara in 754 was instrumental in setting up an ordination hall for monks and nuns at what is now the Kaidan-in, part of Todaiji Temple in Nara Park.

In 759 Ganjin retired and was granted land in what was to become Toshodaiji. Here he set to work on establishing a temple to teach the ideas he had brought with him from China.

During the Kamakura Period, new monks' quarters and a storehouse for the sutras were built and a sharito or relic container was dedicated in 1288. This is now kept at the Nara National Museum along with a Heian Period image of Bishamonten and original Nara Period copies of the Sumidera-shin and Jizaiobosatsu sutras. 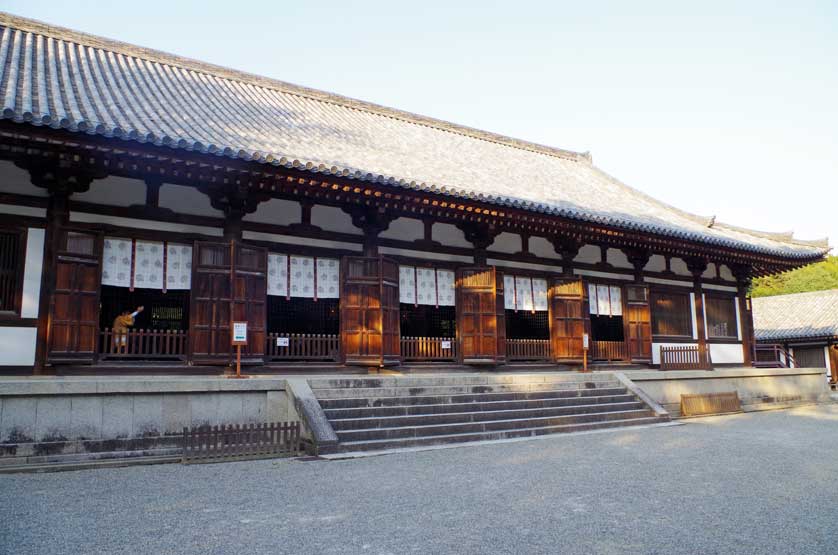 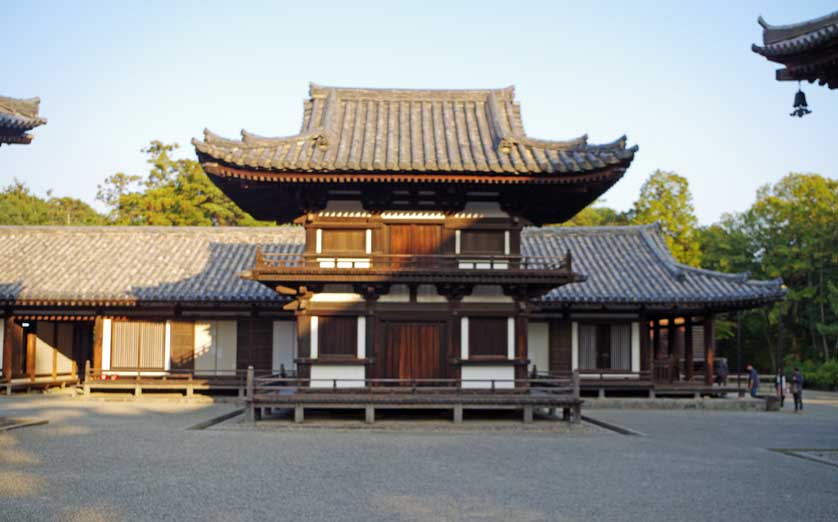 Toshodaiji Temple is a large complex made up of several buildings. Visitors enter through the Nandai-mon (Southern Great Gate), which was reconstructed and restored in 1963 - the 1200-year anniversary of Ganjin's passing.

The Main Hall or Golden Hall (Kondo) is considered a classic of early Japanese Buddhist architecture with its seven bays and one story, sloping tiled roof. The Kondo was reopened in 2009 after nearly 10 years of reconstruction work, when the building was dismantled, repaired and rebuilt.

The Main Hall contains statues of a seated Rushana Buddha (the historical Buddha, Gautama) flanked by standing images of Yakushi Tathagata and a Thousand Armed Avalokitesvara - all National Treasures.

Behind the Kondo lies the Kodo or Lecture Hall, which was moved to Toshodaiji from the Heijo Palace, as a present from the Nara court. The building had previously served as an administration office for imperial affairs. 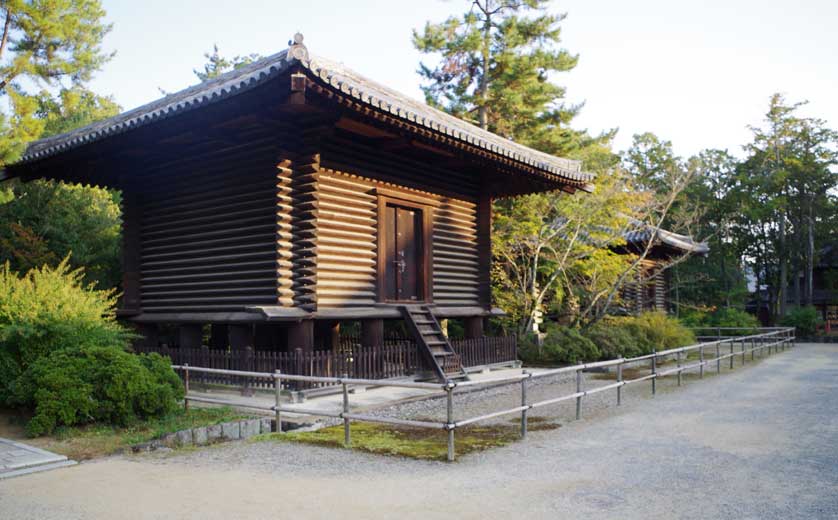 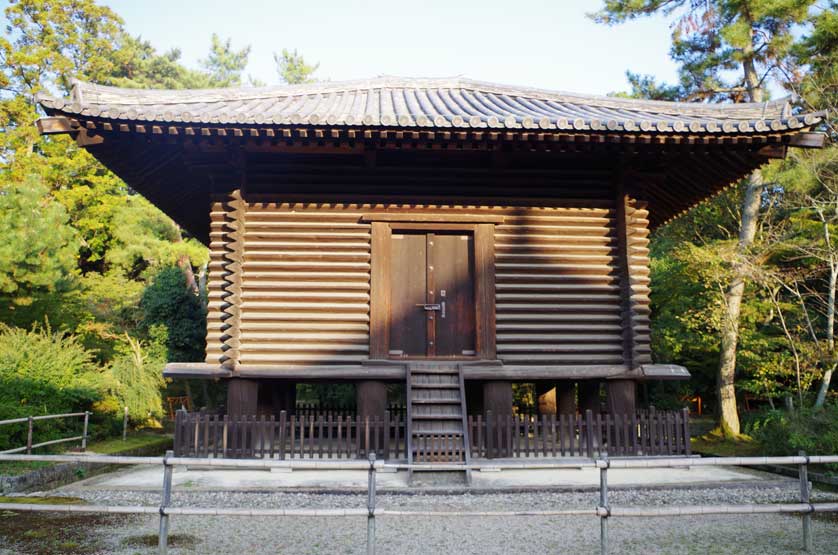 Between the Kondo and Kodo is the Koro (Shariden) which dates from the Kamakura Period and is the only multi-storied building in the temple precincts. The Koro is said to hold ashes of the historical Buddha brought to Japan by Ganjin. The Koro is the site of the Uchiwamaki Ceremony (Fan Scattering Festival) on May 19 which dates back to when nuns from Hokkeji Temple brought round-shaped fans (uchiwa) to honor an abbot of Toshodaiji.

The Raido, next to the Koro, was originally the sleeping quarters of the monks in training at the temple. East of here are two storehouses for sutras (Kyozo) and treasures (Hozo). Built in the azekura style of overlapping logs, the Kyozo is the oldest building at Toshodaiji Temple. The Toshodaiji again to the east is a modern, concrete version of the Hozo and actually contains the temple's treasures.

The Mieido in the north east of the precinct is open to the public for only a few days around June 6th, the day of the founder's death. Here an exquisite hollow, dry lacquer statue of Ganjin is kept surrounded by paintings on sliding doors (fusuma-e) by Higashiyama Kaii (1908-1999).

The Kaizando, just below the Mieido, contains a replica of the statue of Ganjin, completed in 2013. The temple was originally built to honor the Tokugawa dynasty and moved here in 1881.

Ganjin's grave (Kaizan Gobyo) is farther to the east and approached by a bridge over a small pond.

On the west side of the temple is a stone ordination platform or Kaidan. There was also a pagoda located here but it was burnt down in 1802 after being struck by lightning.

Toshodaiji is a short walk from Nishinokyo Station (next to Yakushiji Temple). Take a Kintetsu Nara Line to Yamato-Saidaiji Station from Kintetsu Nara Station and change to the Kintetsu Kashihara Line on platform 6. 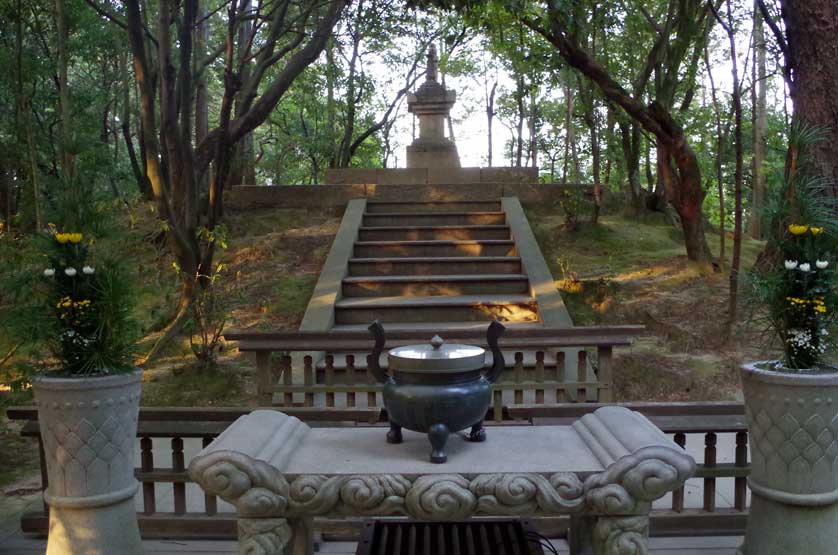 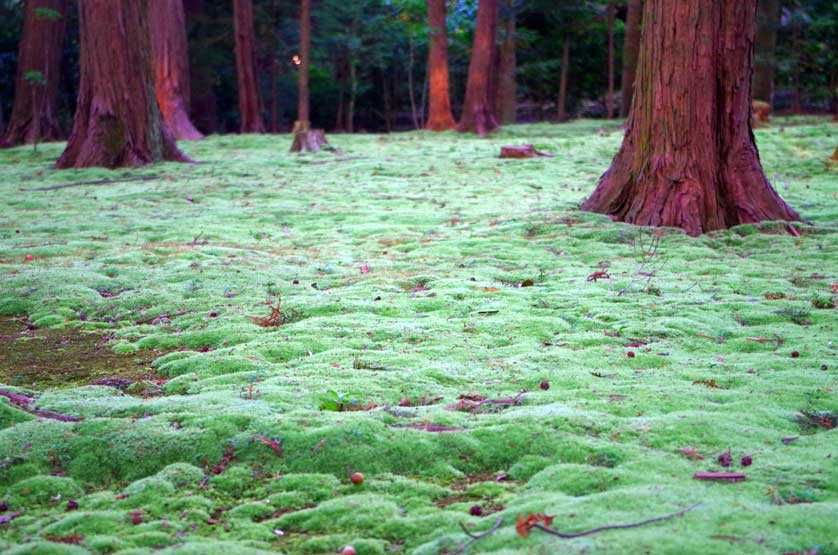 There are overnight bus services to and from Shinjuku Station in Tokyo, Yokohama and day time Meitetsu buses to Nagoya. 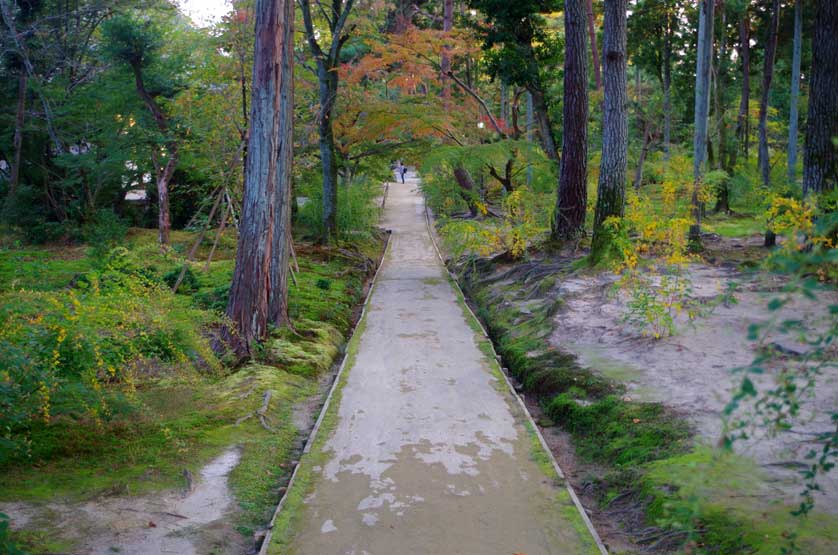