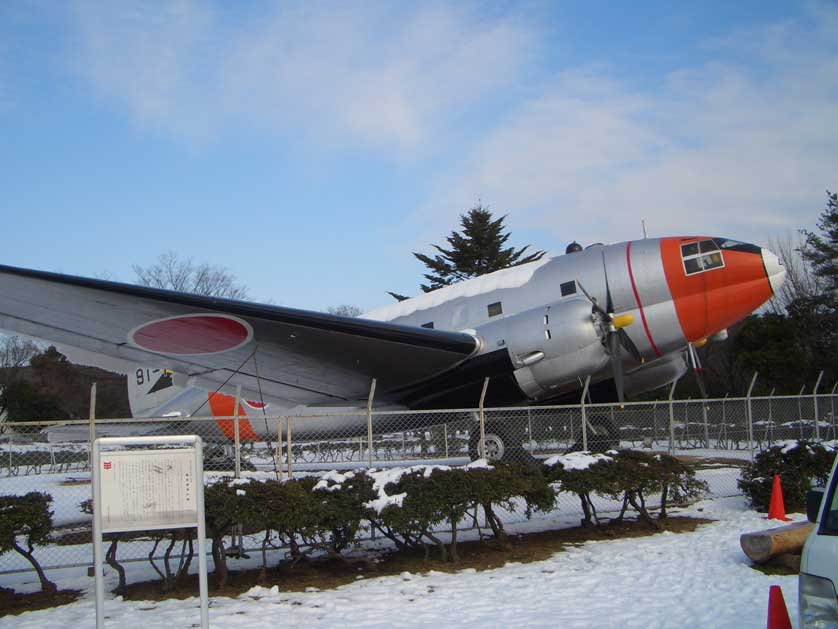 Leave the East Exit of Kokukoen Station on the Seibu Shinjuku Line and the first thing that will catch your eye is an original Air Nippon YS-11A propeller passenger plane built in 1969. It marks historic ground.

Tokorozawa, in Saitama Prefecture, northwest of Tokyo, is the city where the first Japanese airstrip was opened in April 1911. The first flight here took place within the same month, a French-made Henri Farman went up piloted by Yoshitoshi Tokugawa. Kokukoen (Aviation Park) is built on the actual site of the airfield with the old airstrip still visible.

The Tokorozawa Aviation Museum is located in the center of the park. You can spot it from far away: another airplane sits out front, a Curtiss-Wright C 46 cargo plane from the 1950's, in the past used by the Japanese Self-Defense Forces.

The view when entering the main exhibition hall of the museum is breathtaking - it is crammed with vintage aircraft both from the U.S. and Japan, on the ground and suspended in the air. Biplanes, propeller planes, helicopters, flying machines wherever you look. 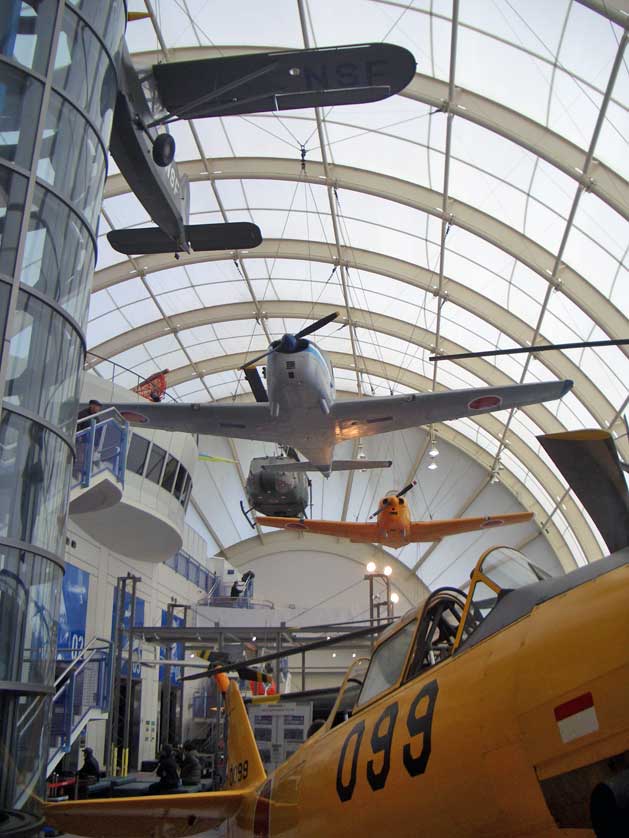 The main exhibition hall at the Tokorozawa Aviation Museum 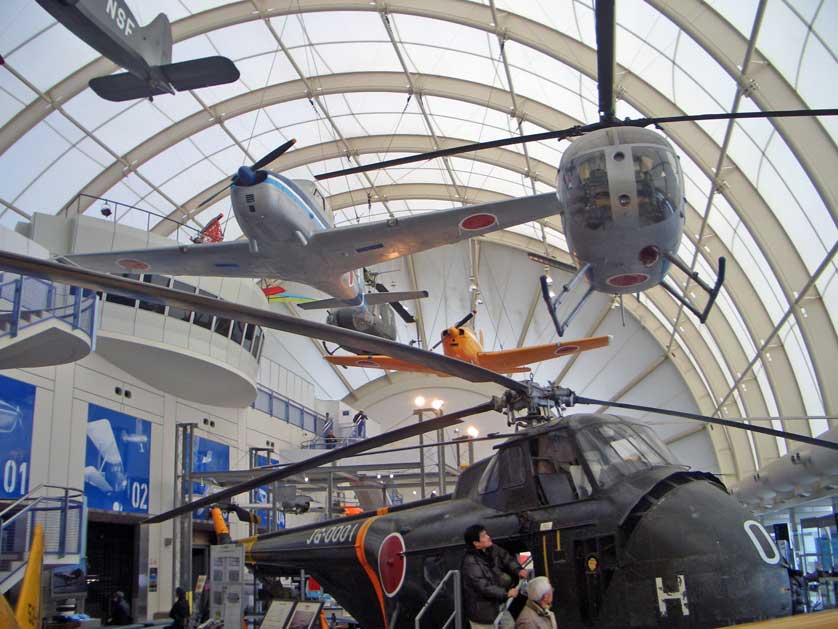 Airplanes on display at the Tokorozawa Aviation Museum

Some of the craft on the ground can be entered, giving, with a little imagination, a bit of a feel of what it must have been like going up in the air with them.

The planes hanging higher up can be more closely inspected from a viewing platform on the second floor.

But there is much more to see and do on the second floor. First off, you can try on a flight simulator how you would do starting and landing a plane.

Then, there is a simulation of an air traffic control tower, showing videos how such a tower is operated. In fact, the actual Air Traffic Control Center for all of Kanto is nearby, just outside the park. From there, all the Narita, Haneda and the smaller airports' flights are coordinated.

A large part of the second floor is dedicated to the history of Japanese aviation. The exhibition details the preparations for and the execution of the first flight taking place here in 1911, reaching an altitude of 10 meters, stretching a distance of 800 meters and lasting all of 1 minute and 20 seconds.

That was however not the first flight of a motorized airplane in Japan. Already in 1910, both Yoshitoshi Tokugawa and Kumazo Hino took off from a meadow in Yoyogi. 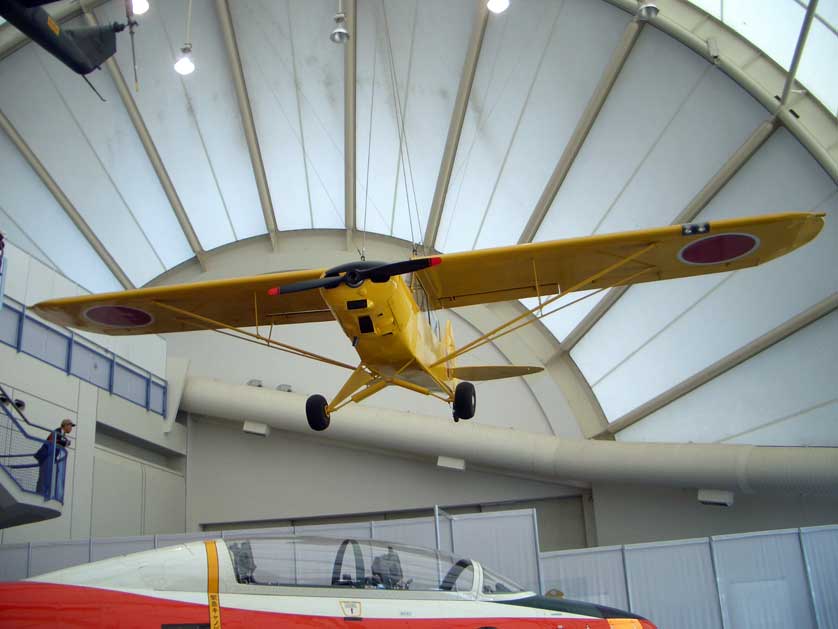 Historic planes on display at the Tokorozawa Aviation Museum 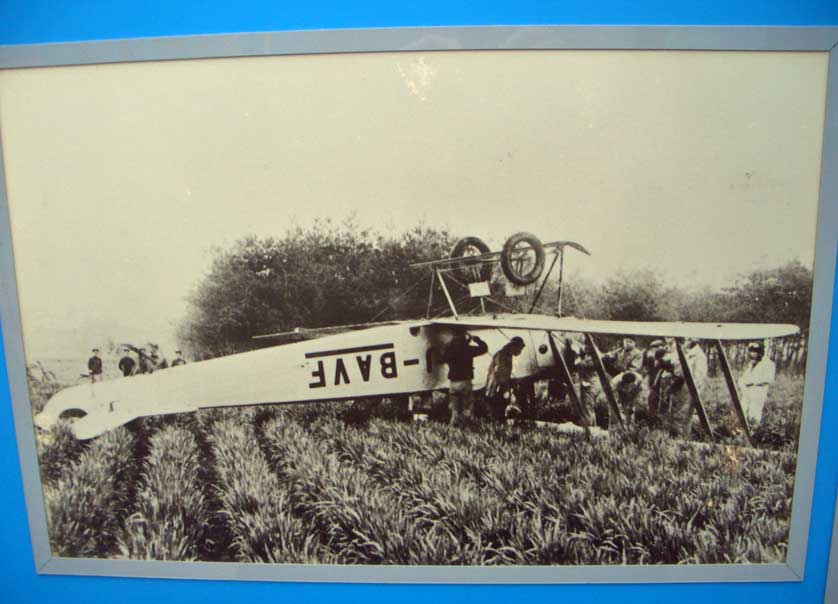 The Tokorozawa airfield quickly became the center of Japanese aviation.

Foreign staff (mostly French but also American) trained Japanese pilots and taught the construction of the crafts. Soon, Japanese engineers were able to build their own.

The first fatal plane crash in Japan also took place in Tokorozawa. In 1913, both pilots died when their plane exploded in the air on a return flight from Tokyo Aoyama. They received a state funeral and out in the park, a monument was erected in their memory.

The massive air force installation it had become by the time of World War II made it a prime target for American air raids, causing huge losses in the civilian parts of the city.

In September 1945, the U.S. Air Force took over the installation and opened its own airbase here. 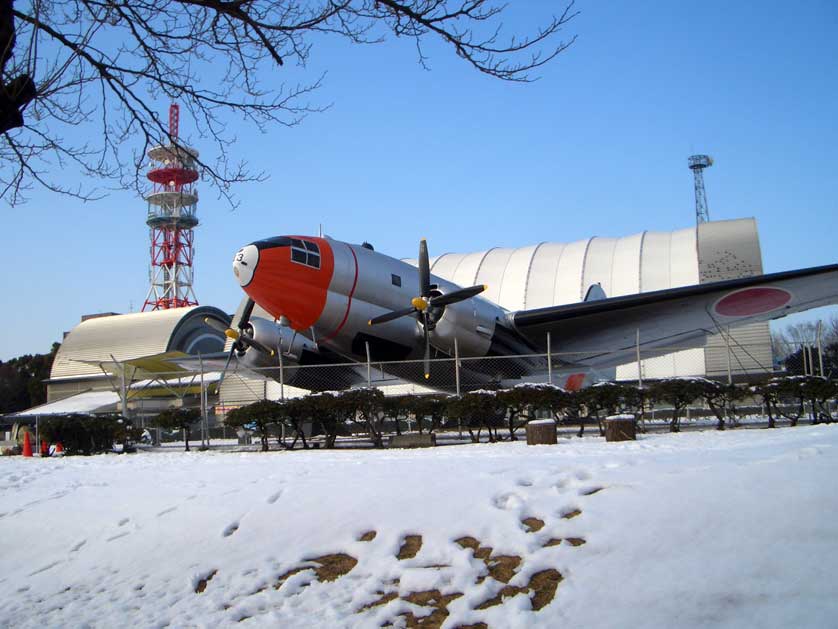 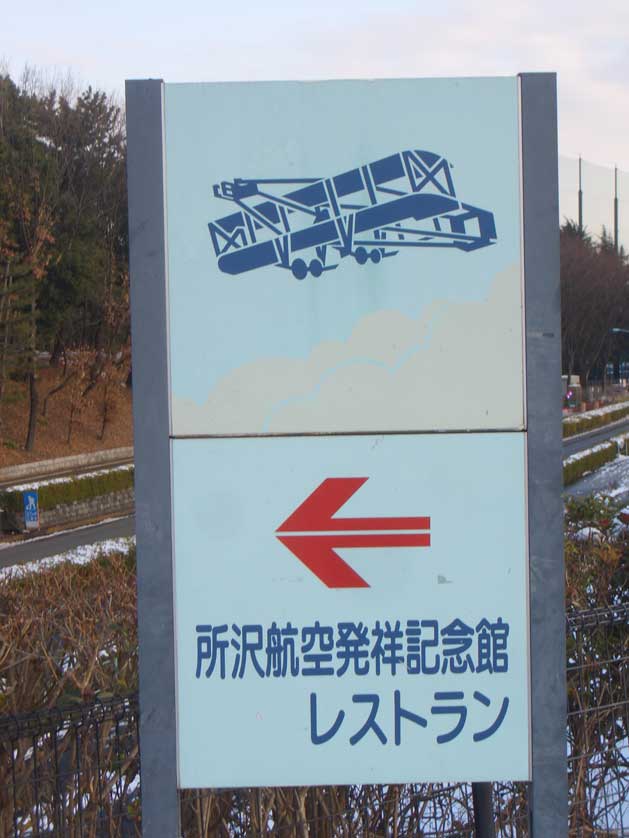 By the early 1980's, most of that base had been returned to Japan, resulting in the construction of Kokukoen and eventually, the museum.

If you take a longer stroll to the area north of the park, however, you can still see a large fenced-in flat grassland marked as U.S. base territory.

At the same time, you may be able to see fighter jets on a roaring ascent or descent course up in the sky. They are coming from / heading to the nearby Iruma Airbase of the Japanese Self-Defense Forces. By now, Iruma has taken over Tokorozawa's role as the airbase of the region.

Back to the museum. After taking in all the exhibits, there is the option to visit the on-site IMAX movie theater. IMAX, these are the theaters with the extremely large screen and the double-70mm projection system filling them with high-resolution pictures.

There is always one aviation-related picture on show. But it's usually not the only attraction on the schedule. Other popular IMAX documentaries are also on display, featuring the deep sea or other unrelated topics. Be sure to check the schedule what runs on what time if you want to enjoy further aviation exposure.

If you live in the vicinity and speak Japanese, be sure to pick up the flyers announcing lectures and workshops. The museum also offers an on-site library of books on Japanese aviation.

There is a gift shop, of course, and there is also a coffee shop / restaurant inside the building. 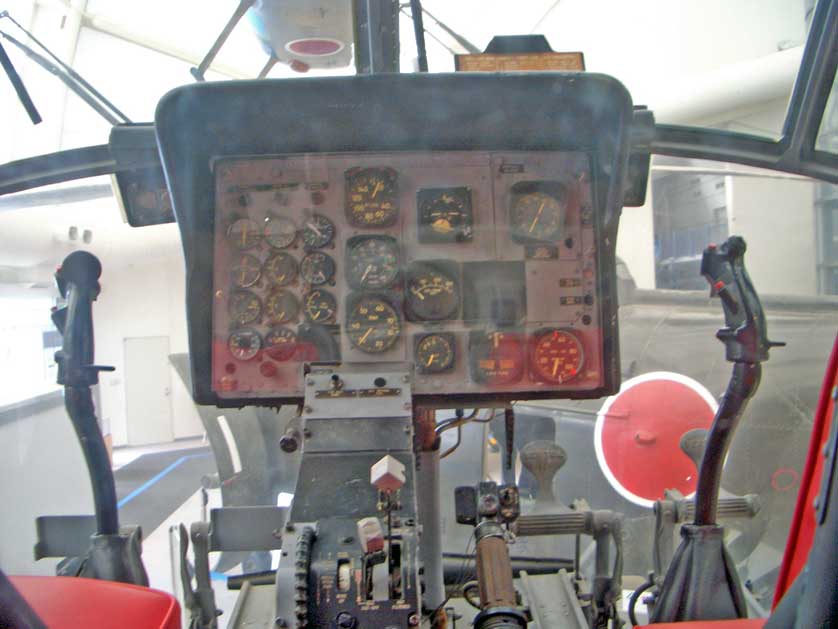 In the cockpit at the Tokorozawa Aviation Museum 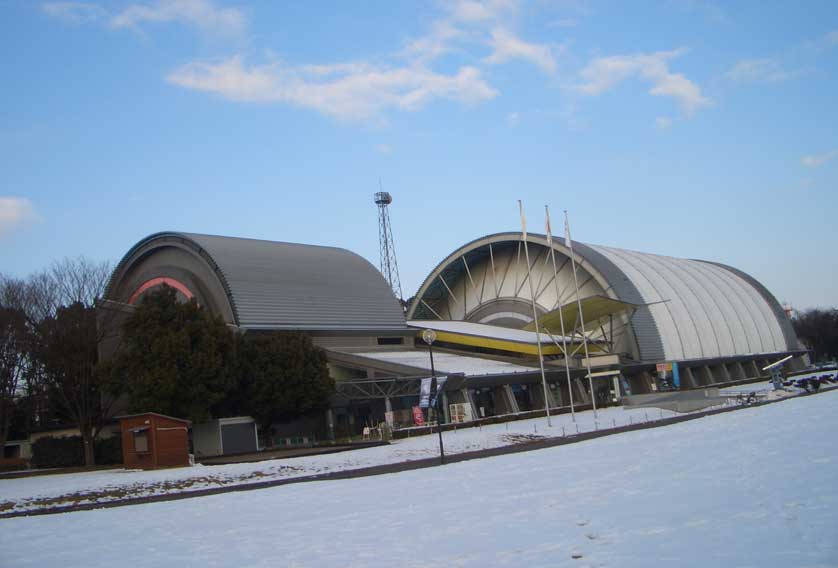 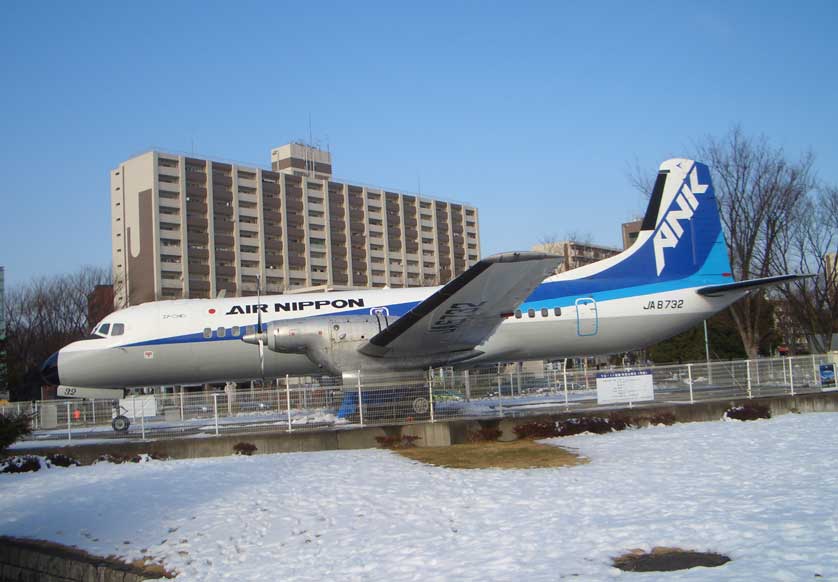 Aoba Castle (Sendai Castle) in Sendai was built by Date Masamune in 1602.

Railway Museum: read a guide to the Railway Museum in Omiya, Saitama, one of Japan's most popular museums, popular with train enthusiasts and children.