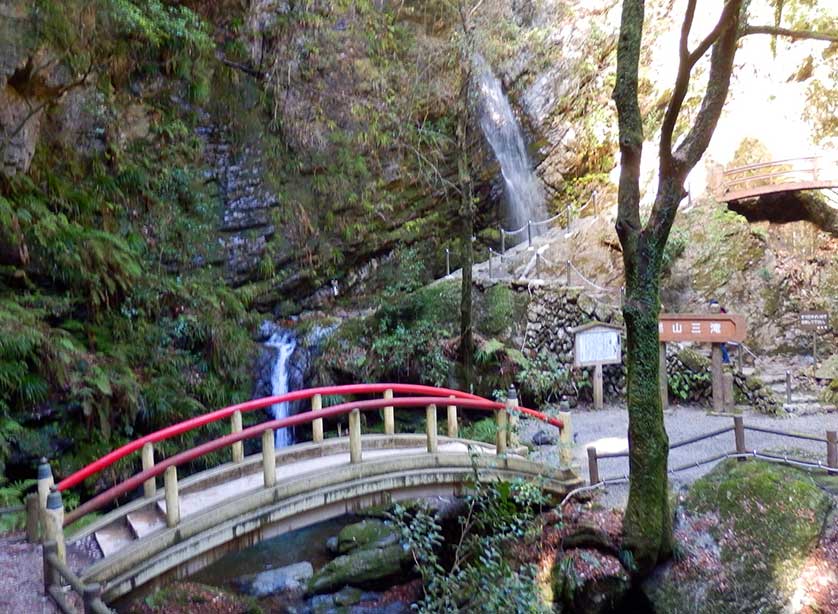 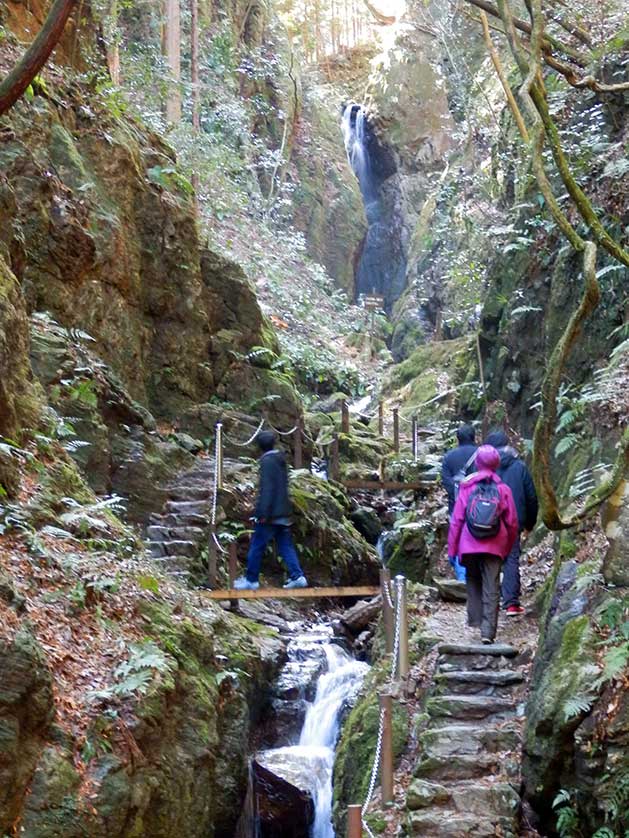 Hikers on their way to the Tengu Taki, Ogose Town, Saitama Prefecture

Traveling the back roads deep in the Chichibu Mountains of western Saitama Prefecture can get you to magical places. The Three Waterfalls of Kuroyama (Kuroyama Santaki) are certainly one of them.

The Three Waterfalls consist of the Odaki (11 meters) and the Medaki (5 meters) located right next to each other, as well as the Tengu Taki (14 meters), which crashes into a narrow gorge a few minutes' walk away.

As beautiful as the setting of the waterfalls themselves is, it is the walk through the valley leading to them that makes the visit a magical experience.

The area is famous for its autumn colors but it is worth a visit in any season. 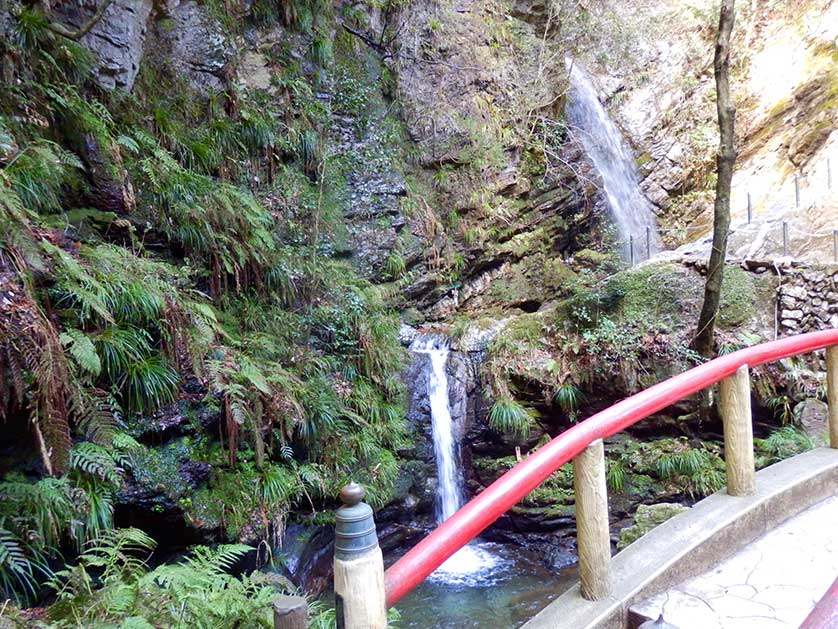 To know a little about the history of the waterfalls makes the walk all the more exciting. Partly shrouded in legend, amazing things took place there in the distant past.

Many centuries ago, the wild mountains of the Chichibu area were a favored retreat of the Yamabushi. Yamabushi are ascetic mountain monks who have been living deep in the forests since Heian times, undertaking rigorous daily training.

Their spiritual beliefs were derived from both Shinto and Buddhism with a good shot of Taoism thrown in.

They trained in martial arts and they steeled themselves by meditating for endless hours sitting under the flow of cold waterfalls.

In 1398, during the Muromachi Period (1336-1573), leading ascetic monk Ei'en founded Kumano Kuroyama Shrine at the entrance of the valley leading towards the waterfalls.

Though part of the Kumano shrine group, Ei'en's yamabushi shrine was most closely connected with Shogoin Temple in Kyoto, the spiritual center of the mountain monks.

At the time, about 150 ascetic mountain retreats were active in the Kanto region. Here the monks lived either as hermits or in small monasteries. The Kumano Kuroyama Shrine soon became their center.

All three waterfalls provide perfect pools. Ideal places to have the cold mountain water coming down on the head while meditating for hours on end.

Later on, many of the yamabushi served as monk warriors during the wars of the Sengoku Period (1467-1603) leading up to the creation of Edo Japan.

Once a considerable number of them, however, joined a Buddhist anti-feudal revolt called the Ikko Ikki in the final years of the 1500's, powerful feudal lord Nobunaga Oda crushed them and essentially broke the back of their spiritual community.

Though they lost all remaining political power with the ascent of Tokugawa regime, the ascetic way of living the monks practiced, Shugendo, is still kept alive today by a small number of monks, mostly in the Kumano area of Wakayama Prefecture. 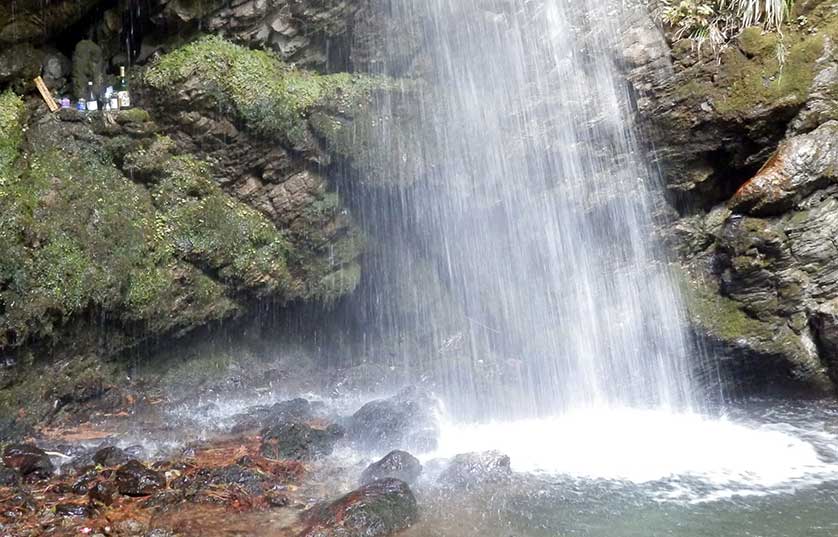 Offerings of sake next to the Odaki Fall, Ogose, Saitama Prefecture

Females were strictly banned from all yamabushi training places, including the Three Waterfalls.

But with the power of the yamabushi broken, new interpretations of the spirits of the waterfalls were suddenly possible. They came from unlikely quarters.

Sanpei Owariya, born in Ogose, the small town to which the waterfalls belong today, became a powerful player in the Yoshiwara, the legendary Edo brothel quarter. (Edo is the old name for today's Tokyo.) Owning one of the largest pleasure houses of the Yoshiwara was not enough for Owariya, he also looked for a special, spiritually uplifting connection to the gods.

Owariya declared the gods of the falls to be the ancestral gods of his family. He erected stone markers still visible today on the way to the falls. 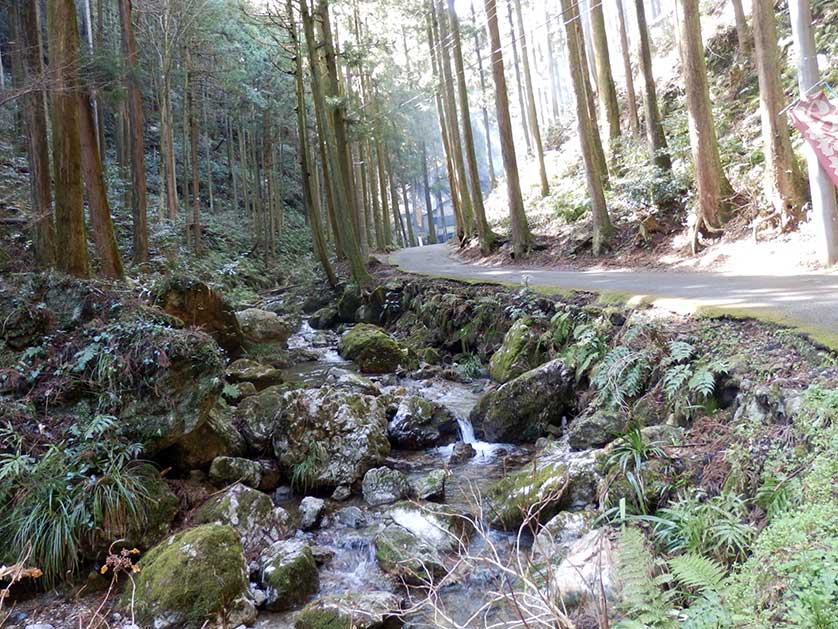 The road towards the Three Waterfalls of Kuroyama

Close to Tokyo but still secluded deep in the mountains, they became a favorite haunt for writers working on their novels, needing a solitary stay at a comfortable place with a steady supply of drinks.

Those hot spring guest houses remained popular with writers and other guests until the end of the Showa Period (1926-1989).

Walking to the Falls

Take the Ogose Kanko Bus from Ogose Station heading for Kuroyama and get off at the final stop. Then, enter the valley. The walk to the waterfalls is only a little more than one kilometer but there is plenty see.

You will first walk through a sort of tiny village. The most dominant building of the village has a sign outside saying Kuroyama Kosenkan. The grand building has been abandoned for years though its former glory still shows.

The Kuroyama Kosenkan was perhaps the most popular onsen hot spring ryokan with Tokyo writers from the Meiji days until the end of the Showa Period. The final year of the Showa Period, 1989, was the year when the Bubble Economy of the 1980's reached boiling point. Money flew easily and in that year somebody financed the grand building the ryokan owners opted to erect.

It was not to last. Kuroyama became a mere day trip destination in the years to follow. Reviews written by visitors of the Kosenkan still available online praise the grand baths of the Kosenkan - but nobody reported about staying there overnight. The Kosenkan closed its doors in 2014.

It's a sad story but then, life is fleeting. The ancient monks, the brothel owner and the writers would all have agreed on that. One could even speculate that the failure of the Kosenkan saved the valley from the plight of further modern construction. 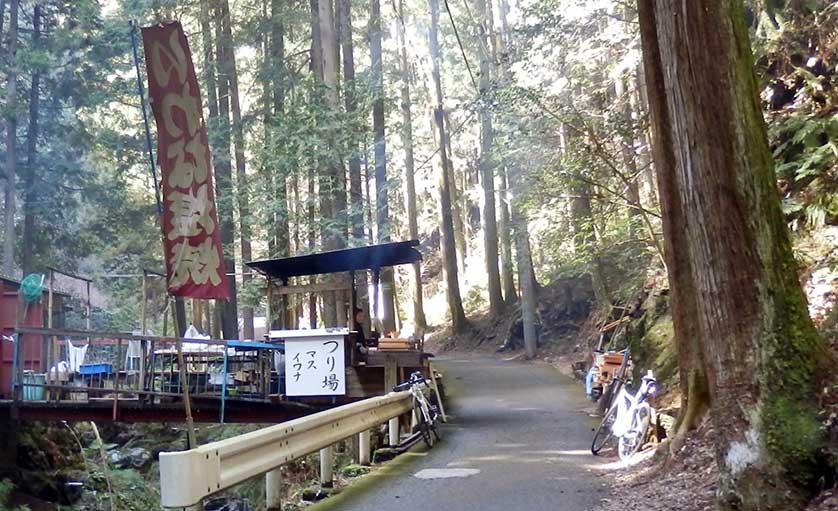 Grilled fish is served on the way to the falls

The narrow road leading up to the falls follows a small river, belonging to the Arakawa River system. Soon, a somewhat ramshackle wooden restaurant will come into view to the right. It appears as if its operators had just shrugged off the money of the bubble times and continued what they had been doing anyway: serving cheap food and beers to people visiting the falls. They are still in operation.

Keep on walking. Smoke seems to fill the valley ahead. Getting closer, you realize that the smoke comes from an old wooden compound built right over the river.

The smoke comes from a roadside river fish frying place attached to the compound. An old lady sells iwana (char aka charr, a particularly delicious river fish of the trout family) as well as regular trout (masu), both caught in the river below the compound. Freshly grilled, they are offered to the hikers walking by. Signs spell out what to do on days with few visitors: ask for your fish to be grilled. It will be ready for consumption on your way back from the falls. 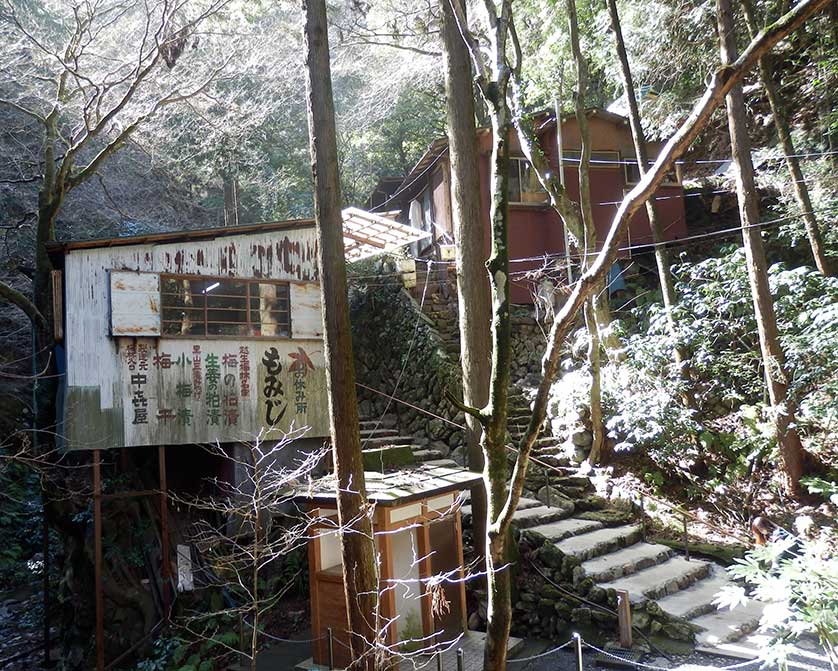 Walk up further. A string from which shide dangle, white paper strips folded into a zigzag shape and indicating the boundaries of a holy Shinto territory, hangs high up across the road. You are getting close to the falls now.

A road marker points to the left - to the Tengu Taki Fall, the highest of the Three Waterfalls of Kuroyama. The fall is located in a narrow gorge but can be spotted from the road.

Tengu, after which the fall is named, are wicked human-shaped mountain creatures, sporting a long red nose. They never come without a paper fan in hand and they are always ready for a vicious prank.

Perhaps incidentally, the old legends of the wicked tengu are at least partly based on myths surrounding the ascetic yamabushi mountain monks.

Walk on and a strange construction comes into sight: a narrow ancient stone staircase leading up to a narrow pathway between a vintage rest house / store on the left and an old building to the right which is most likely the home of the proprietors of the rest house. 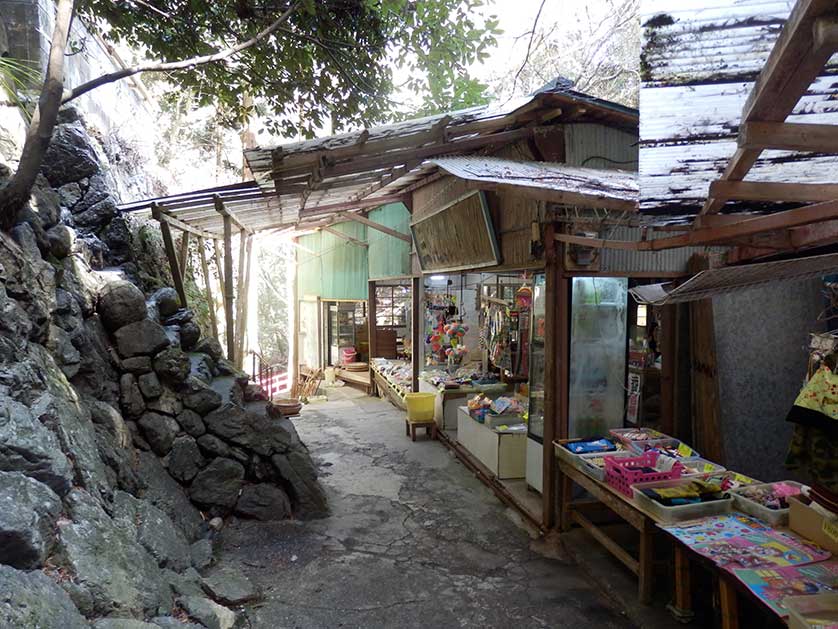 Narrow pathway with the rest house / shop on the right

The rest house offers seats and hot bowls of oden, a sort of steamed farmer food now also fashionable in the cities. The same structure continues on as a store, selling local umeboshi pickled plums as well as a number of locally made craft products.

The residential building to the right, on the other hand, extends into a sort of roofed-over hiker rest spot which seems to double as a sort of shrine hall.

Having passed that narrow pathway, the view opens up to the two most famous of the Three Falls: the Medaki to the left and the Odaki to the right. They crash down from the rocks above behind a small red bridge in decidedly Shinto shrine design.

The Odaki is a bit above, the water from its pool flows down into the pool below the Medaki. The waters of both will flow into the river below.

Offerings of small bottles of sake are placed close to the points where the two falls hit their pools.

It is a beautiful sight and yes, it's very easy to image how the ascetic monks sat there below the falls and let the water hit their heads for purification from all the earthly dirt and sins. 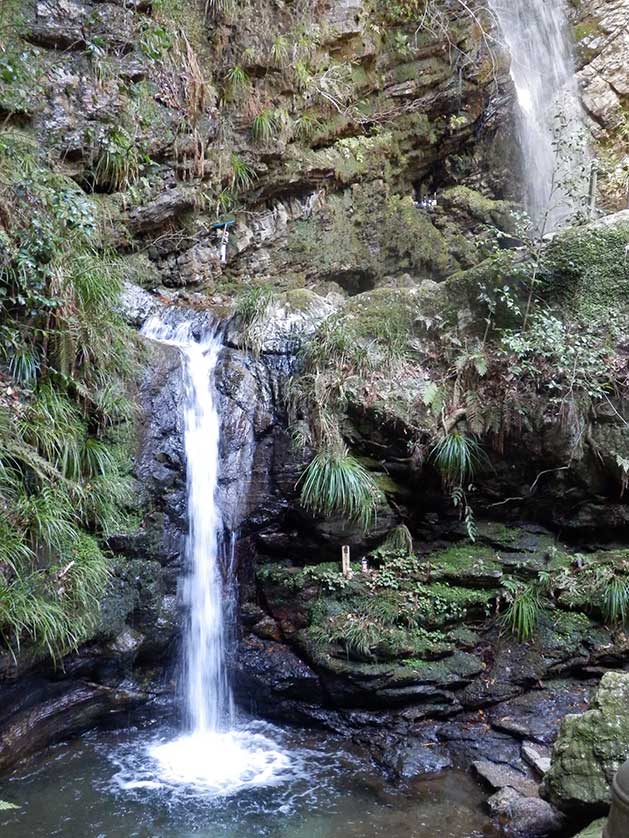 To get to Ogose, take the Tobu Tojo Line from Ikebukuro Station to Sakado Station and change there to the Tobu Ogose Line. The line terminates at Ogose Station. The train trip takes about 80 minutes one way.

If you are in western Tokyo, the JR Hachiko Line (running from Hachioji, Tokyo to Takasaki, Gunma Prefecture) might prove convenient. It also stops at Ogose Station.

You can look up the schedule of the buses going to Kuroyama during the week of your trip here (in Japanese).

Return buses starting in Kuroyama can be found here.The bus schedule changes several times during the year. Make sure to check the schedule shortly before you go. 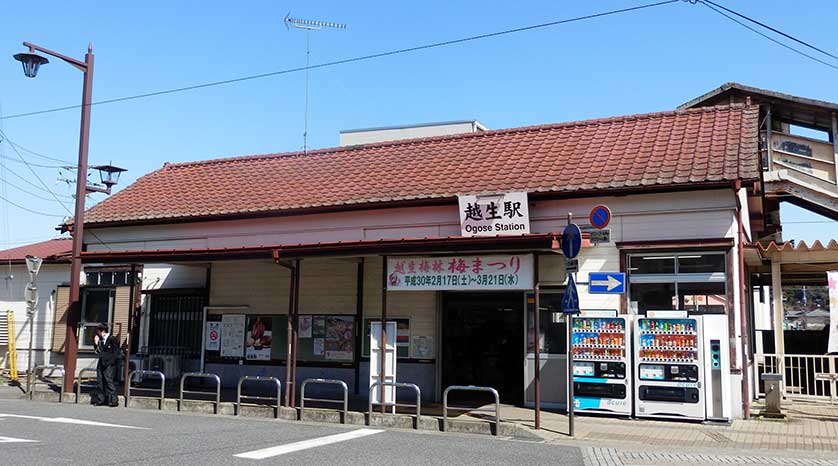 The Naguri Valley (名栗) near Hanno in Saitama Prefecture is a popular destination for Tokyoites seeking hiking, camping and temples.

Mount Oyama, in Kanayama Prefecture, is a popular hike within reach of Tokyo, 60km to the east. Mount Oyama is known for its numerous shrines and temples and spectacular autumn leaves.

Misotsuchi no Tsurara is a frozen waterfall on the Arakawa River in Chichibu, Saitama Prefecture that is illuminated in January and February.