The Museum of Aeronautical Sciences (Kohkuu Kagaku Hakubutsukan in Japanese) is a fun, hands-on experience right next to Narita Airport. 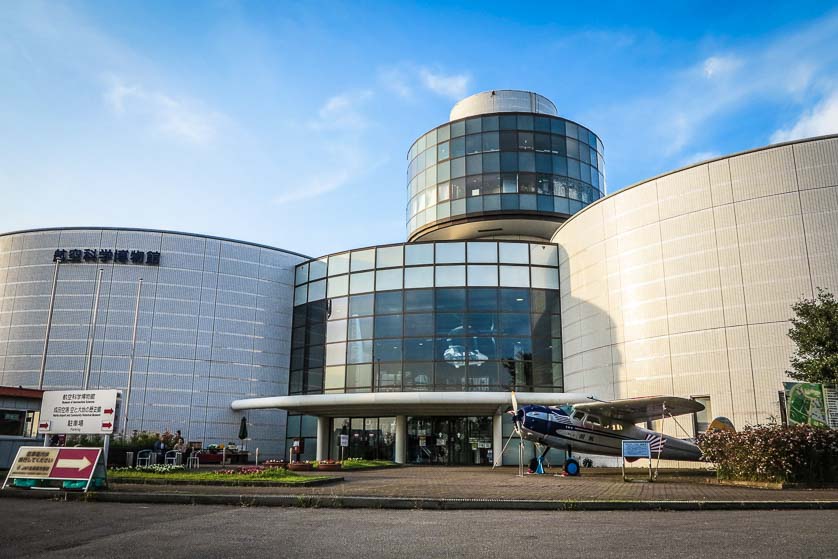 The Museum of Aeronautical Sciences (Kohkuu Kagaku Hakubutsukan in Japanese) is a fun, hands-on experience right next to Narita Airport for those with any interest in aircraft. The Museum is located in the city of Narita, in Chiba prefecture.

Located right beside Narita International Airport, at the south end of its runway, this popular museum literally buzzes with everything powered-flight-related, offering both a bird's eye view of airplanes in action while providing a huge range of aircraft related experiences, realia and (to a lesser degree) information. 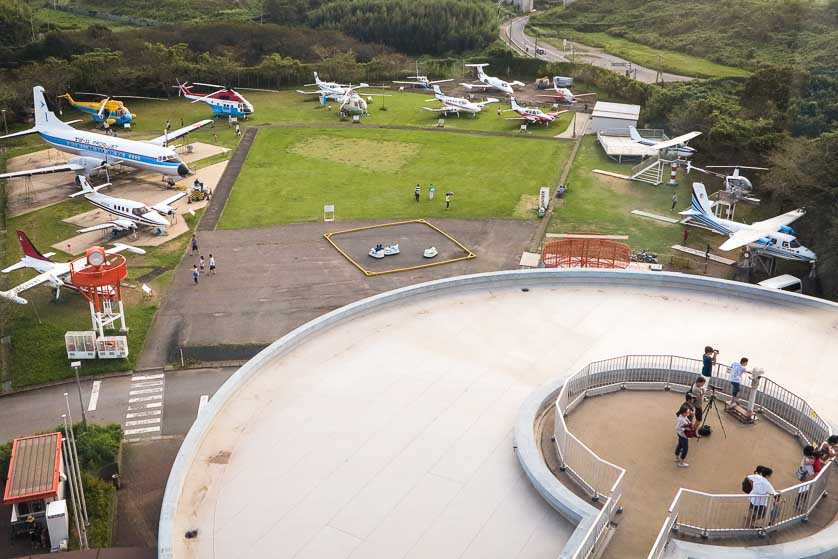 View from roof of Museum of Aeronautical Sciences, Narita 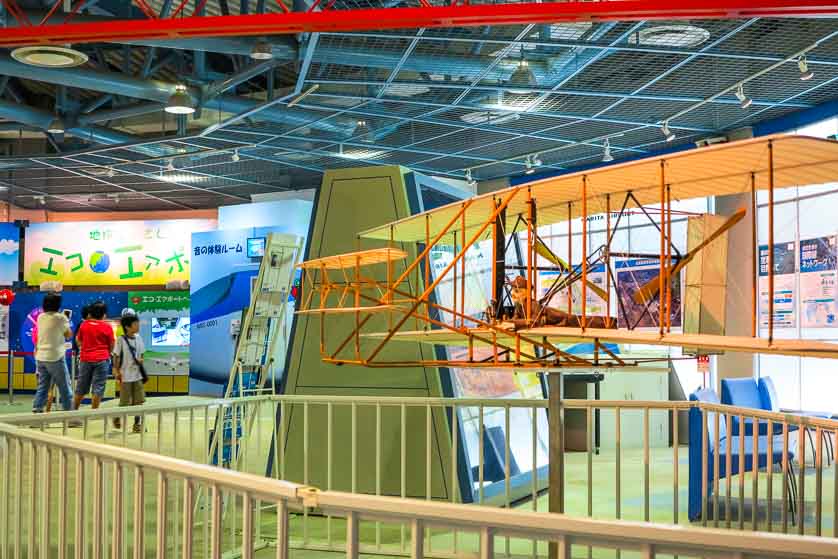 The Museum of Aeronautical Sciences covers the history and current state of modern powered flight, including its development in Japan. In front of the museum building is a lawn featuring 15 retired small planes and helicopters, mostly from the 1960's and 70's, and many of which can be climbed into.

Inside the museum are eight zones dedicated to different aeronautical-related areas and activities. Headset flight simulators offer virtual piloting experiences of modern jet liners as well as classic planes like Japan's Mitsubishi Zero and the United States' Bell X-1 ("Glamorous Glennis"), the first manned airplane to fly faster than the speed of sound. There are guided tours of the inside of a Boeing 747 (500 yen), and full-size flight simulations for the Boeing 747-400 (free) and DC-8 (100 yen) at scheduled times during the day (all Japanese language only).

The cavernous Boeing 747 room has wing sections, landing gear, jet engines, and fuselage cross-sections, providing a memorable impression of the true, up-close size and power of wide-bodied jets. Game-style and miniature model-based flight-related exhibits in other sections both entertain and educate children about powered flight. Other exhibits include various airplane piston and jet engines, a reconstruction of the interior of a wide-bodied jet, and a display of airplane uniforms. There is also a flight-related library.

The Museum of Aeronautical Sciences also has a special exhibition running at any one time. 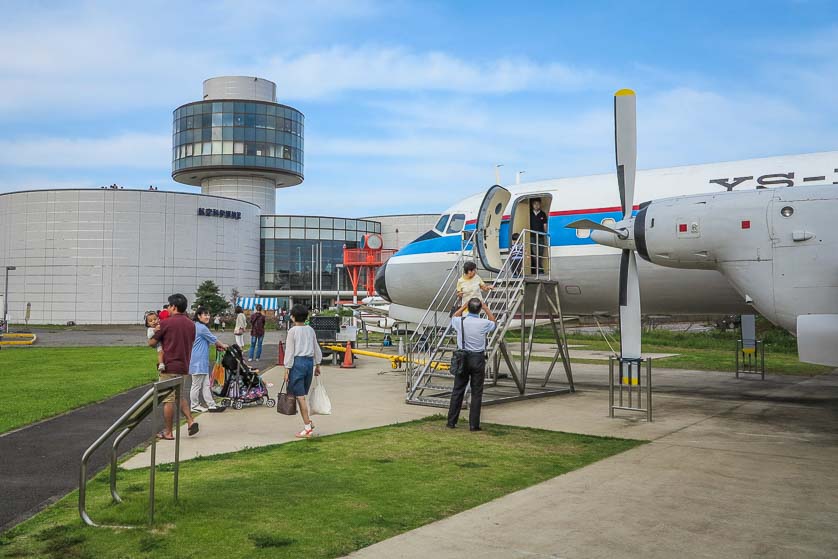 Front lawn of the Museum of Aeronautical Sciences, Narita 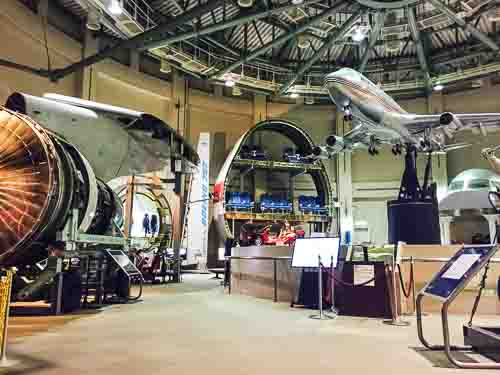 Boeing '747 Room at the Museum of Aeronautical Sciences, Narita

The Museum of Aeronautical Sciences provides three places from which visitors can observe airplanes taking off and landing at Narita Airport.

An indoor observation deck on the top, fifth, floor looks out over adjacent Narita Airport, letting visitors observe arriving and departing planes in upholstered comfort, and with live commentary (in Japanese) from a permanently stationed guide who announces the details of each observed take off and landing.

An outdoor observation deck on the third floor offers a more raw experience of powered flight, with planes roaring overhead just a few hundreds of meters away.

The museum restaurant is on the fourth floor, offering views over the airport while dining.

Activity on Narita Airport's runway can also be observed from two small parks that adjoin the Narita Airport runway: Sanrizuka Sakura no Oka Park, which is near the Museum, at the southern end of the runway, and Sakura no Yama Park at the northern end.

Directions to Sanrizuka Sakura-no-oka Park: From Keisei Narita Station or the JR Narita Station, take the JR bus bound for Yokaichiba Station and get off at the Juutaku-iriguchi bus stop. A 10-minute walk from there.

Beside the Museum is another, smaller, museum: the Narita Airport and Community Historical Museum, which comprehensively chronicles the extremely turbulent history of Narita Airport's construction from the 1960s through the 1980s with mainly graphical exhibits and some realia (exhibits in Japanese only, with a very abbreviated English-language pamphlet). Admission free. 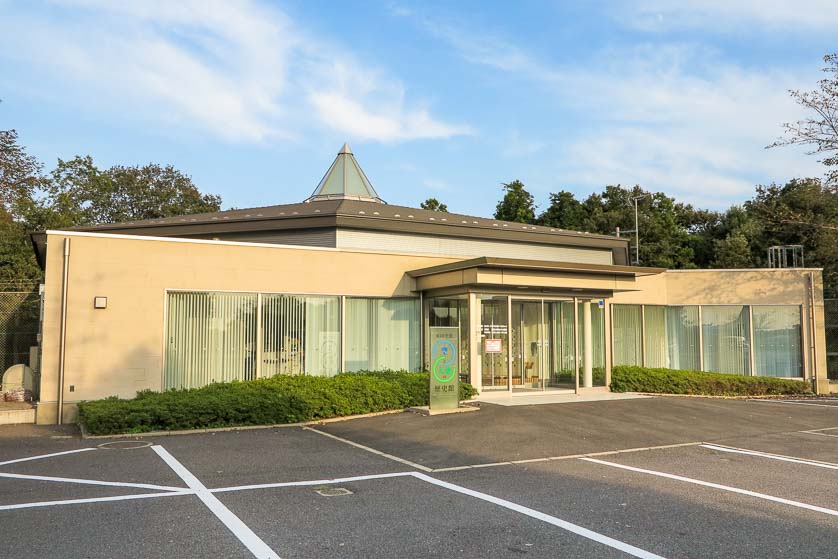 By train, take the East Exit of JR Narita Station and board a JR bus bound for the Museum of Aeronautical Sciences. (Some such buses will go there via the Sakura no Yama runway observation point.)

10 am - 5 pm (last entry at 4:30 pm)
Closed Mondays, except mid-July to the end of August when the Museum is open every day. (During other times, the Museum will open on Monday if Monday falls on a public holiday. If open Monday, the Museum closes the next day, Tuesday.)