Mitsumine Shrine: read a travel guide to Mitsumine Shrine in the Chichibu area of Saitama Prefecture where people prayed to the wolf kami to protect them from fire and thieves during the Edo Period.

Located high up in the densely forested ridges west of Chichibu, Mitsumine Shrine has often been described as one of Japan's most beautiful mountain shrines. Mitsumine Shrine is at the summit of Mt. Mitsumine in Chichibu-Tama-Kai National Park.

The opportunity to actually visit the shrine arose when a friend from Europe arrived who wanted to see something different than the concrete expanses of Tokyo. On a sunny late-summer morning, we headed for the Mitsumine. 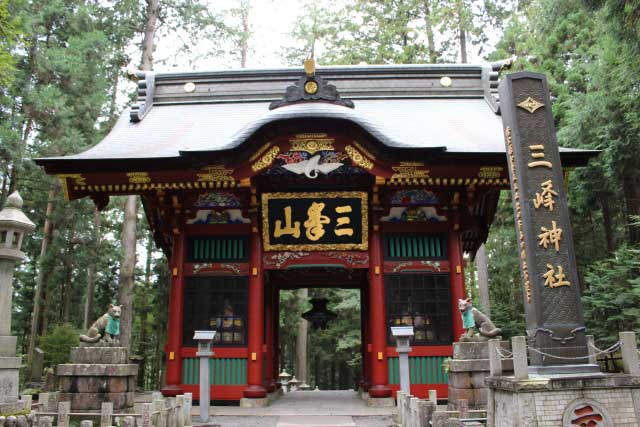 A visit to the shrine can easily be done as a day trip from Tokyo. Take the Seibu Line train to Chichibu - the Red Arrow Express going straight from Ikebukuro Station is advertised as covering the distance in a mere 78 minutes. Right outside Seibu Chichibu Station, you can hop on the bus to the shrine. The bus will take a little more than an hour to reach the Mitsumine Shrine.

Older travel guides may still recommend the Mitsumine Ropeway which conveniently connected Mitsumineguchi Station, the final stop on the Chichibu Main Line with the shrine. Alas, after more than 65 years of reliable service, the ropeway stopped operating in 2006.

In fact, the bus takes a long detour as well since a mud slide triggered by a typhoon destroyed the main access road to the shrine. When the main road was still open, the bus ride to the shrine took a mere 30 minutes. As of this writing (October 2014), that road is still under repair. 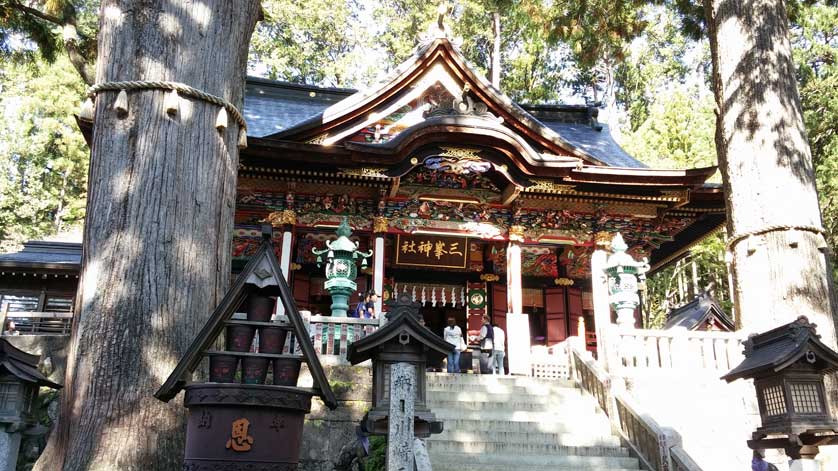 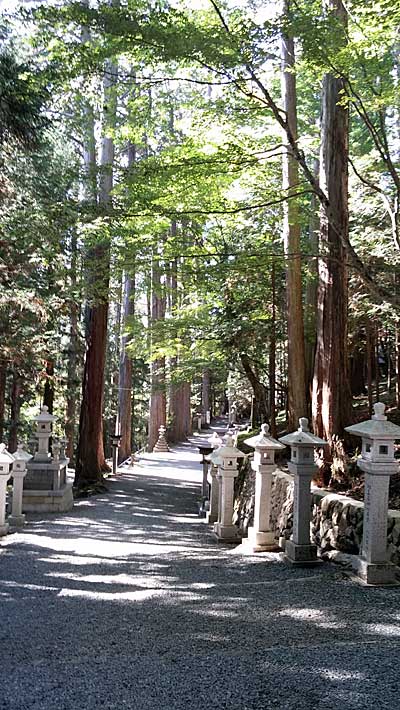 Path to the main shrine of Mitsumine Shrine 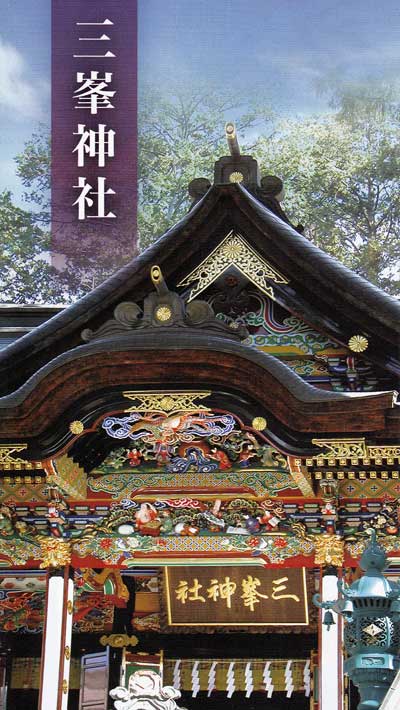 This longer bus ride will take you however through a breathtakingly beautiful mountain landscape which is especially recommended in fall, when the autumn foliage turns the forests wildly colorful.

The bus will make its final stop at the parking lot of Mitsumine Shrine, at an elevation of 1,100m. From there, you still have to walk uphill to finally reach the main shrine.

You walk by two soba noodle restaurants that also serve as souvenir shops before you enter the woods encircling the shrine. If you need rest and hot food during your exploration of the shrine, here is the place to stop for it.

Walk straight up and you will arrive at an intersection that leads to three different points of interest. To the left, you see the richly ornamented Zuishinmon Gate, the entrance gateway to the main shrine.

The steps to the right lead to a viewpoint from which you can look over the descending ridges all the way to Chichibu city.

The path straight ahead will take you to a statue of Yamato Takeru, the mythical founder of the shrine. More on him later.

At that junction, Zuishinmon Gate is definitely the direction to turn to. The gate stands in the middle of the forest, the main shrine is not visible from it yet. The Zuishinmon is not your usual red torii. It's a veritable wooden gate, colorfully painted and decorated with a vast array of carvings. 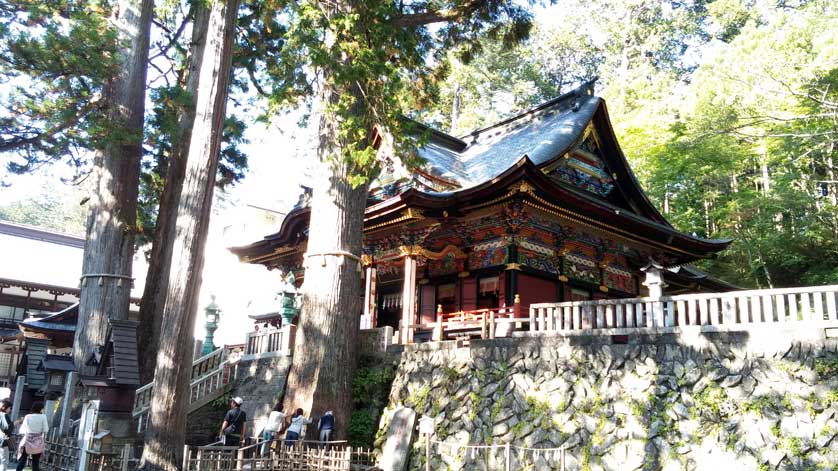 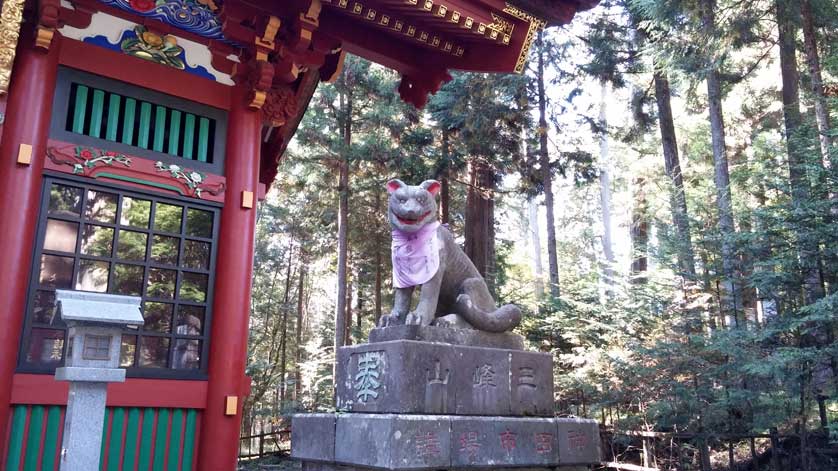 In front of it sit two stone wolves. This shrine is dedicated to Japanese mountain wolves, among a variety of other gods. Today, those wolves are a long eradicated species but they did roam the mountains before Japanese hunters became equipped with firearms.

In ancient times, these wolves were considered holy. Their spirits would protect people's houses against fire and burglars, many people believed.

In the Edo times (1603-1868), when Japan was closed off from the rest of the world, Tokyo grew into one of the largest cities on earth. Everything in the city was built of wood. Large fires were frequent and so were robbers who tried to take whatever they could during the chaos of the infernos.

The Edo authorities tried their best to arrange fire and theft protection by practical means but many Edo residents needed to combat their worries by spiritual means as well.

In those days, Mitsumine Shrine became hugely popular among the people in Edo. Praying to the wolf gods would provide some mental relief from the constant worries of fire and theft. In those times, a trip to the Mitsumine Shrine was an arduous undertaking that took several days on dangerous mountain paths.

Carvings on the main hall (honden) of Mitsumine Shrine

Walk on beyond the Zuishinmon gate. It takes only a few minutes and you will finally stand in front of the main shrine hall (Honden). It is impressively beautiful indeed.

Dating from the late Edo Period, the building features an incredible variety of wood carvings on the outside while on the inside lacquer work from the 16th century dominates.

It's difficult to take in all the intricate wood carving details just by standing in front of the shrine. They are just too many and often too small to easily make out. Take your time and eventually you will figure them out.

In front of the shrine hall stand three tall cedar trees. People line up before them and donate money to be able to touch them. No, not to just touch them but to put their full palms and foreheads to them. Those trees are supposed to radiate energy and you can recharge your spirit by getting in touch with the trees. So it says on the signboards.

Walking to the right from the shrine hall, you will see a number of smaller family shrines, including one to the Tokugawa family that ruled Japan during the Edo era. Some of them are actually much older than the current main shrine.

If you head to the left, you arrive at a large white modern building. It houses a hot spring bath and an onsen hotel where you can stay right on the shrine grounds. A night is about 10.000 yen per person, meals included.

While the main shrine can get crowded, not many visitors seems to care about the statue of its legendary founder, Yamato Takeru. It's rather recent and he looks more like a manga character the way he is portrayed than a serious old warrior.

According to the Kojiki (published in about 712 A.D.), Japan's oldest book recording the legends of the gods and stories relating to Japan's oldest history, Yamato Takeru was the son of an emperor in the second century A.D. He had a violent streak and killed one of his brothers. His father, mythical Emperor Keiko, thus sent him away as far as he could on warrior missions.

Yamato went as far as the current Ibaraki Prefecture - conquering territories for his father while at the same time founding numerous Shinto shrines. The Shinmeisha Shrine in Tokorozawa, Saitama, for example, is also said to have been founded by him. Both the Mitsumine and the Shinmeisha shrines date back to about 150 A.D. according to the Kojiki. 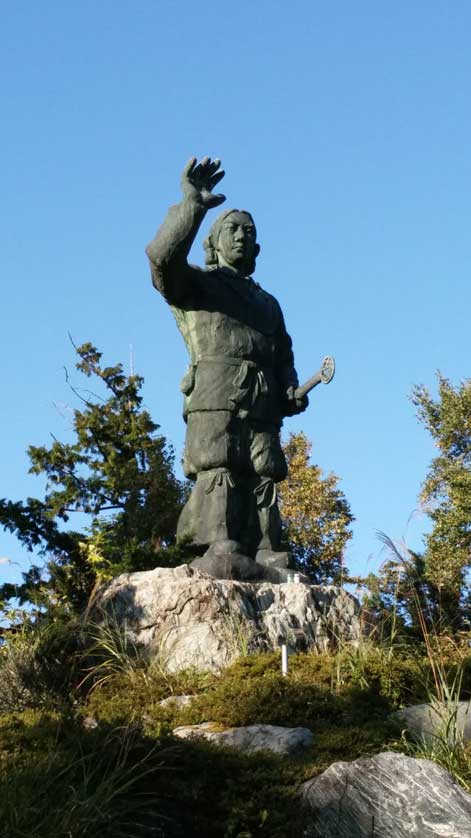 Statue of the mythical Yamato Takeru

The shrine's actual territory doesn't only consist of the few easily accessible areas around the main shrine though - it stretches way out into the mountains around. Exploring those further regions may be beyond the limits of a quick day trip.

When you walk back down from the main shrine to the parking lot / bus stop, you get a good view of Mount Kumotori in the far distance.

At the Kumotori, Saitama and Yamanashi prefectures meet with Tokyo-to. With an elevation of 2017m the Kumotori is the highest mountain in Tokyo.

The hiking path to the Kumotori from the Saitama side starts right at the Mitsumine Shrine. Hiking there is considered a full day trip - one way. On top of Kumotori, overnight accommodation is provided in a small mountain hut which also offers meals. 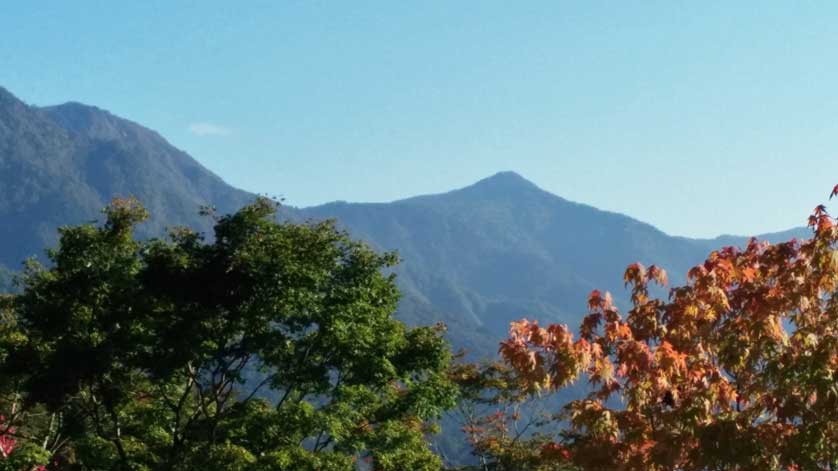 The view to Mount Kumotori

Access: Take the Seibu Line Red Arrow Express from Ikebukuro Station to Seibu Chichibu Station. From there, take the direct bus to the shrine. 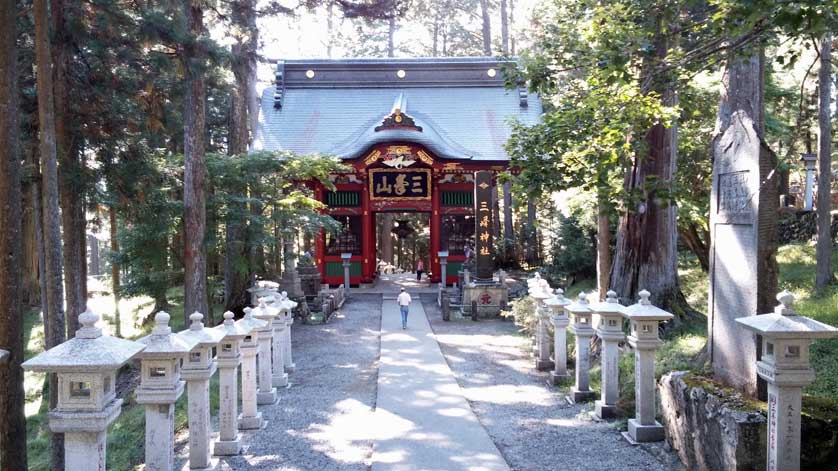