Mount Mitoku, Mitokusan, a 900 meter high mountain in the middle of Tottori Prefecture is a sacred mountain, particularly for the yamabushi, the followers of Shugendo.

Shugendo is a curious mix of mountain worship, Buddhism, kami-worship, and Daoism whose followers practised asceticism in remote mountains to gain spiritual and magical power. 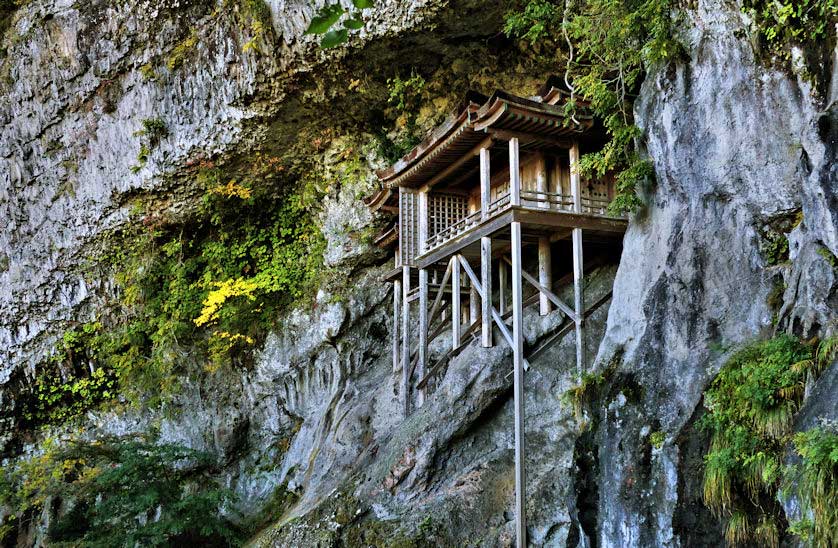 The Nageiredo, a National Treasure, clings to the face of a cliff on Mount Mitoku in Tottori 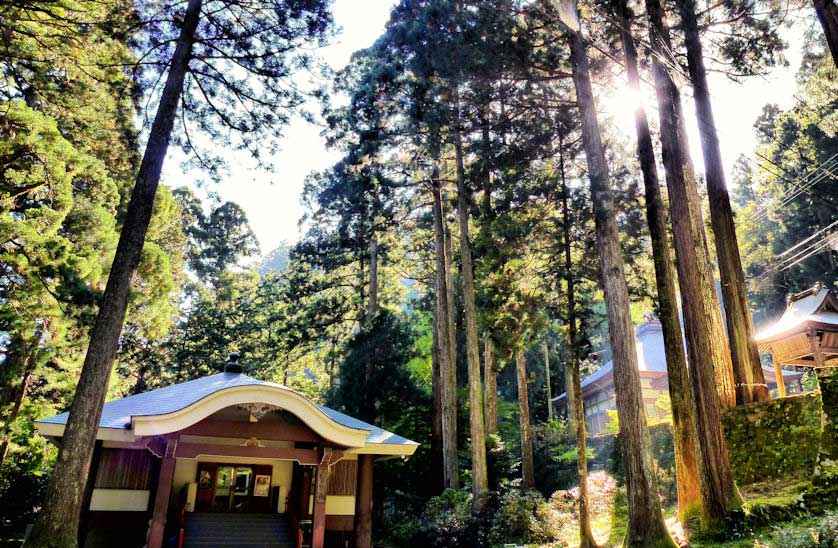 The Treasure Hall at Sanbutsuji Temple, a museum displaying many of the temple's historical statues

At the base of the mountain is a temple complex with a most remarkable structure, the Nageiredo.

The Nageiredo is a wooden hall that seems to defy gravity by clinging to the sheer cliff wall high above the valley below. This architectural marvel has been here over a thousand years and is quite rightly registered as a National Treasure of Japan, the only one in all of Tottori.

Trying to figure out how exactly it was possible to be built, one can quite easily believe the legend that an ancient holy man with magical powers literally threw the hall up into place, which incidentally is the meaning of its name. 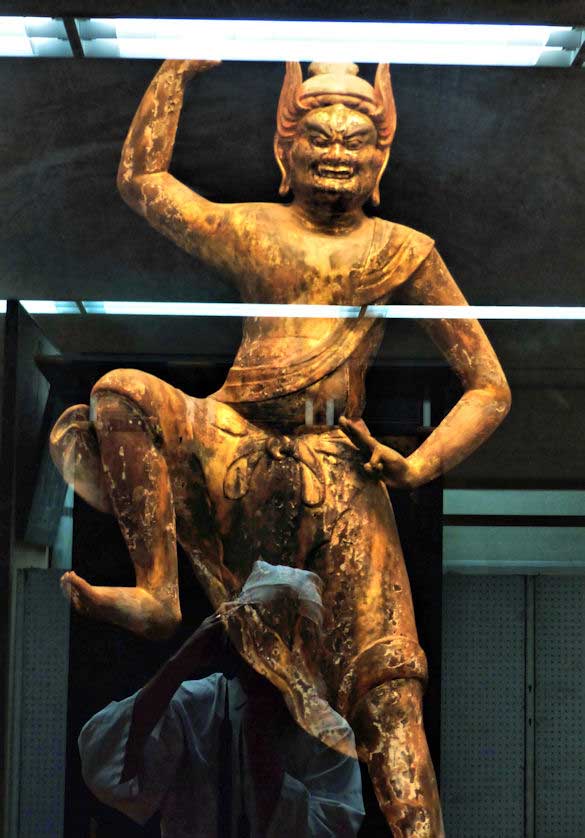 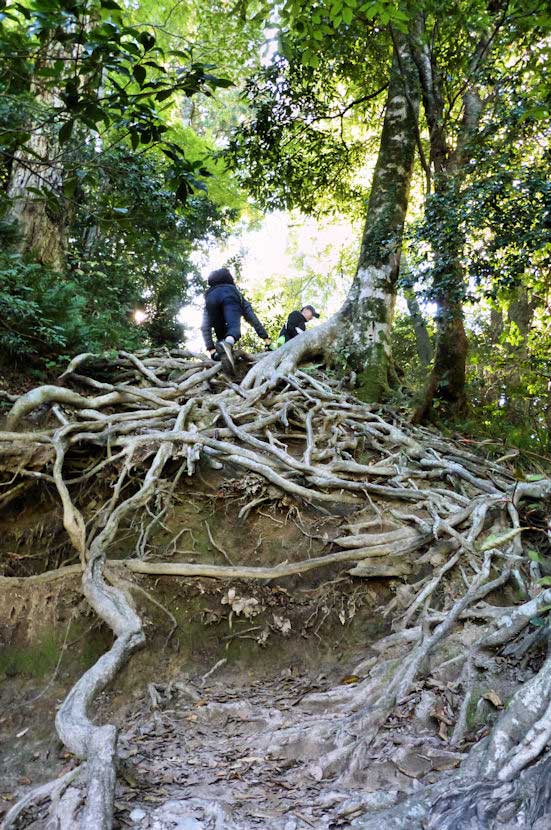 Not a stroll in the park, the way up to the Nageiredo is an obstacle course

The Nageiredo can be glimpsed from a distance at a viewpoint on the main road in the valley below, but to see it up close you are  going to have to follow in the footsteps of the yamabushi, literally!

Part of the training for yamabushi was to follow perilous routes up into caves and other sacred sites. Most of the well known yamabushi sites like Mount Hiko and the Kunisaki Peninsula, both in northern Kyushu, or Mount Ishizuchi on Shikoku have grueling routes up to sacred sites that are still used and open to the public, and Mount Mitoku is no different except here you must get permission first.

The journey starts at Sanbutsuji, the temple complex at the base of the mountain. From the car park or bus stop on the main road steps lead up past several smaller sub-temples and the kiosk where you pay your entry fee.

Up another flight of stone steps and you pass the temple's Treasure House. A better than average collection of statues and such from the temples thousand year history are on display, but the highlight are the statues of Zao Gongen, the deity considered to be the main object of worship for yamabushi.The statues of Zao Gongen here are considered some of the finest in all Japan. 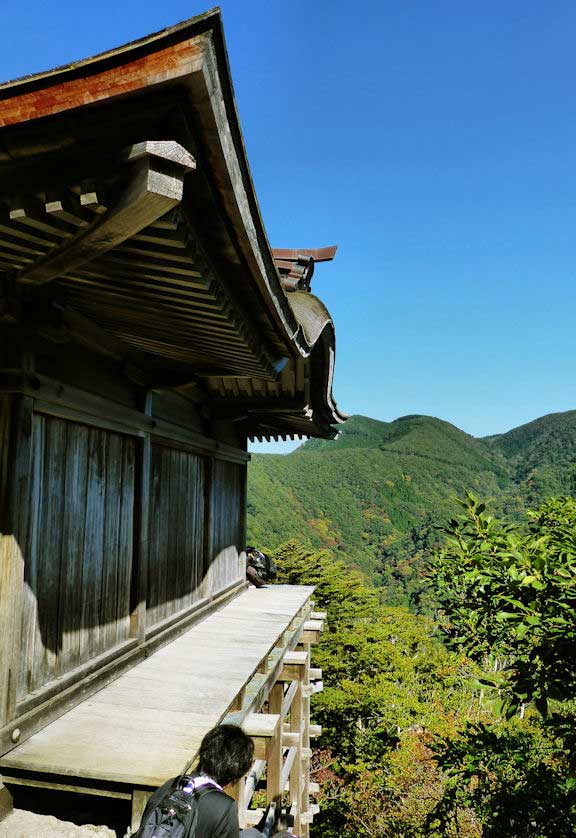 Monjudo, perched on the mountainside offers fantastic panoramas from its open balconies 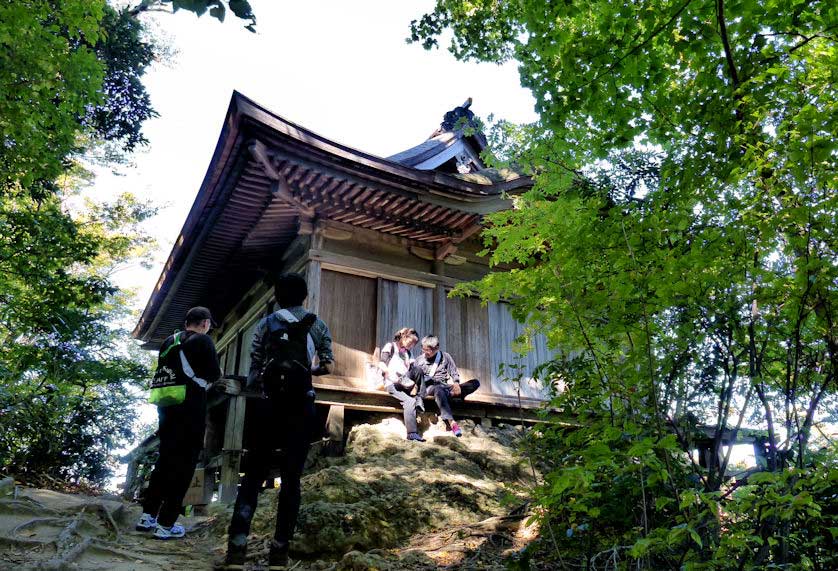 Up another flight of steps is the main temple. Legend has it that the mountain was established as a yamabushi center by En no Gyoja a 7th century mystic and ascetic who is often attributed with being the founder of Shugendo.

However, the temple was most likely founded in the late Heian Period and so is probably 1,000 years old. Signs point behind the Main Hall to the start of the path up the mountainside to the Nageiredo.

After passing through a gate flanked by a pair of huge cedar trees the path passes a small shrine and then climbs up through the forest. At times the way is just a typical mountain path, but at others the way is steep with names like Kazurasaka where you must clamber up through a tangle of tree roots or Kusarizaka where chains help you climb the steep rock face.

Usually at the top of each difficult section is a building that is quite remarkable, like the Monjudo perched atop a pier of struts like the famous Kiyomizudera in Kyoto.

The balcony running around the building has no guardrail but offers stunning panoramic view over the valleys below and mountains beyond. Higher still, the Jizodo is a little smaller but the views are a little more expansive.

The last section of path is fairly level, running along the base of a cliff, and here you pass by even more small wooden buildings, the most impressive being the Kannondo built into a cave. Around the final bend and the goal of your quest comes into view, the Nageiredo. Visitors cannot pass this point, but several times a year monks actually climb up into the building to conduct ceremonies. 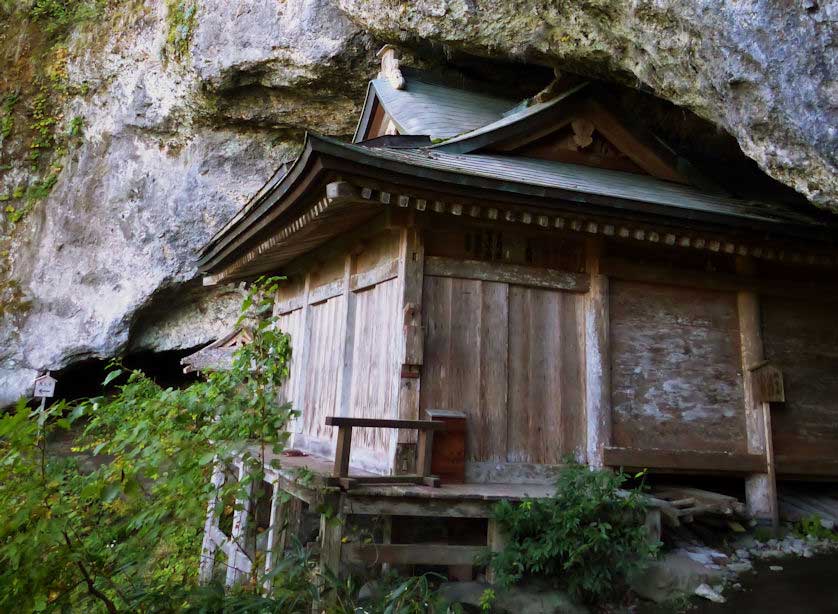 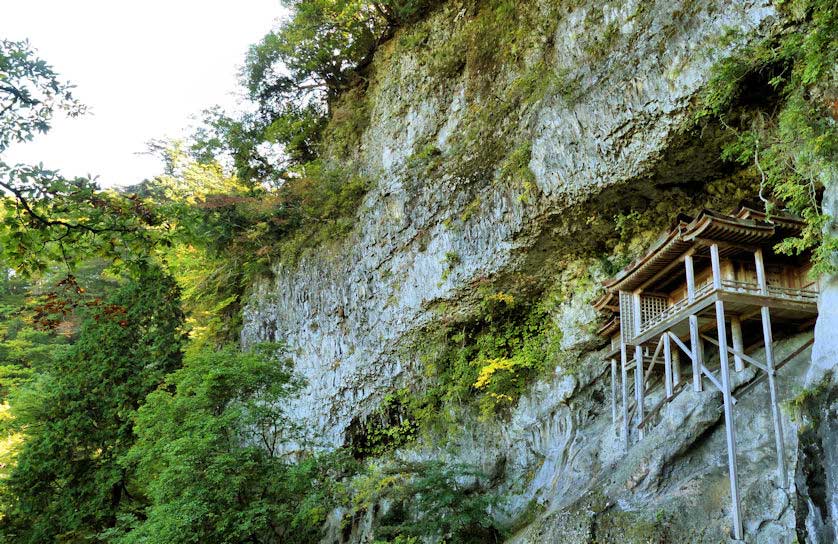 There are some limitations and rules about visiting Nageiredo. Obviously, icy and very wet conditions make the steep ascent dangerous so the trail will be closed then, as it usually is from December to March.

Suitable clothing, especially footwear, should be worn. Before being given permission to ascend the trail your shoes will be checked. If they are deemed unsuitable you will be able to buy a pair of straw sandals that are the traditional footwear worn by the monks while climbing and are actually perfect for the job, being of somewhat higher quality than the straw sandals used just for walking.

For only 700 yen they also serve as a unique souvenir. No walking sticks are allowed nor are you allowed to carry anything in your hands, as you will need both your hands free to make a safe ascent, so small backpacks must be used. Also you are not allowed to climb alone. If you are alone, as I was, you have to wait until another solo pilgrim or small group will accept you. Obviously as this is a religious site there is no smoking or drinking alcohol, etc.

To learn more about the fascinating architecture of the Nageiredo I recommend Japan's Wooden Heritage: A journey through a thousand years of architecture, by Terunobu Fujimori & Mitsumasa Fujitsuka, that has a chapter devoted to it.

Entry to Sanbutsuji is 400 yen for adults. To take the path up to the Nageiredo a further 400 yen.

The only public transport is a bus from Kurayoshi Station in Kurayoshi on the JR Sanin Line. The bus stops at Misasa Onsen which is a nearby hot spring resort and like Kurayoshi has plenty of accommodation. Sanbutsuji also has shukubo, temple lodgings.

Kotokuji is a picturesque temple in Tottori city right in front of the much more famous Kannon-in Temple, known for the small four-century-old naturally landscaped garden at the rear of the temple.