Senganen Garden, located about 1.5 km north of the center of Kagoshima is the former summer villa and garden of the Shimazu clan, rulers of the Satsuma domain, which corresponds roughly to present day Kagoshima Prefecture.

Sengan-en and the Shoko Shuseikan museum are UNESCO World Heritage Sites related to Japan's early industrialization and modernization in the Meiji era. 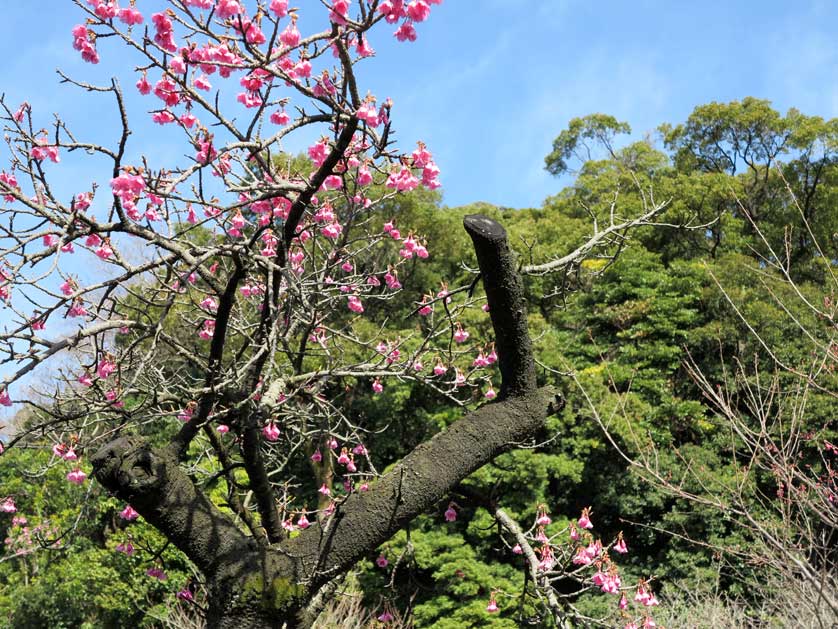 Built by the second lord of the Satsuma domain, Shimazu Mitsuhisa in 1658, Senganen, is a lovely Edo Period strolling garden in the Chinese style, using Sakurajima and Kinko Bay as "borrowed scenery" within the 50,000 square meters of the grounds, which contain bamboo, camellia, plum trees and early-flowering cherry trees. 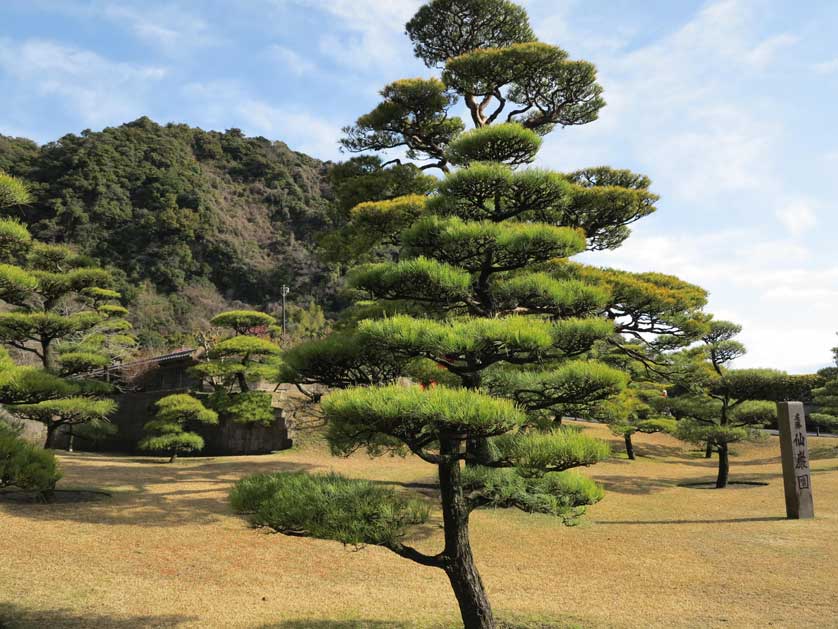 Senganen was once located right on the coast and was approached by boat.

Sengan-en incorporates the Shimazu-ke villa (Iso Residence) - a rural retreat for the Shimazu lord and his family.

After the abolition of the feudal system in the 1870's the Shimazu family continued to live in this luxurious villa, which was rebuilt for their use in the mid-1880's.

The main entrance gate Shomon is about 150 years old and was used a location in the filming of the NHK Taiga drama, Atsuhime, which relates to the history of the Satsuma domain at the end of the Edo Period, a period of Japanese history in which the Satsuma clan played a decisive role in the overthrow of the Tokugawa regime, after over two centuries in power.

Of more architectural interest than the Shomon is the smaller Tin Gate - a small, vermilion painted gate with a tin roof. Tin was once an important commodity mined in Kagoshima. The Bogakuro Pavilion was presented to the Shimazu family from the Ryukyu Kingdom of Okinawa, which had become a vassal of the Satsuma clan following an invasion in the early 17th century.

Two huge stone lanterns are also of interest in the garden, one in the shape of a crane, the other a lion. 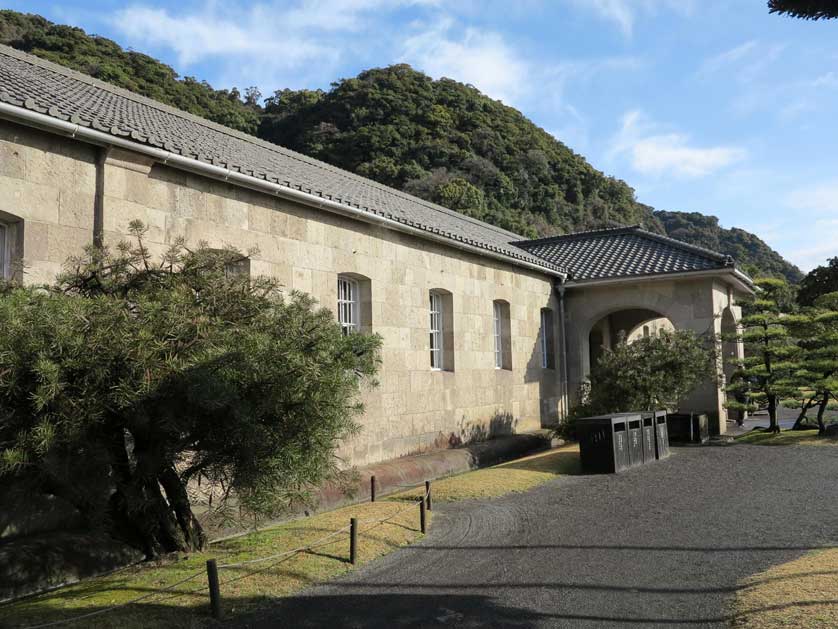 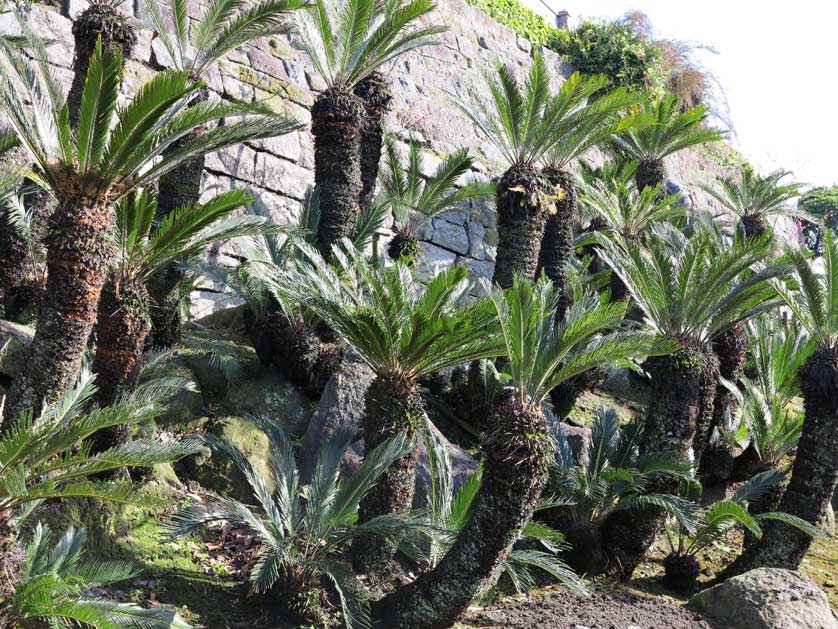 The Sengan-en Garden has spectacular "borrowed" views of the Sakurajima volcano and includes shrines, ponds, running streams, stone bridges, bamboo, plum and cherry blossoms in season. A feature of Sengan-en are the profusion of Sago palms which are characteristic of Kagoshima Prefecture. The gardens include a bamboo grove of "Moso Bamboo" from China, which is said to have spread over Japan from this site.

Included in the price of admission to Sengan-en is entry to the interesting Shoko Shuseikan Museum, with a vast collection of Shimazu clan family heirlooms including scrolls, weapons, maps, documents, Satsumayaki ceramics, cut glass (kiriko), dolls and tools. The museum showcases the Shimazu clan's efforts to modernize and industrialize their domain.

Indeed the Shoko Shuseikan can claim to be Japan's first factory as it was built to manufacture machines in an effort to copy western industrialization. Opened in the late 19th century in 1865, Shoko Shuseikan was the pet project of the 11th lord of Satsuma, Shimazu Nariakira. Designated an Important Cultural Property, Shoko Shuseikan is the first building in Japan to utilize a Western-style arch feature at its entrance.

The grounds of Senganen also include a large artillery piece that was used to defend Kagoshima from a British fleet that attacked the town in 1863, demanding recompense for the murder of the Shanghai merchant Charles Richardson by Shimazu clan samurai in Namamugi, near Yokohama the year before. Behind the 150-pound cannon is the site of a former reverberating furnace used to cast the gun. 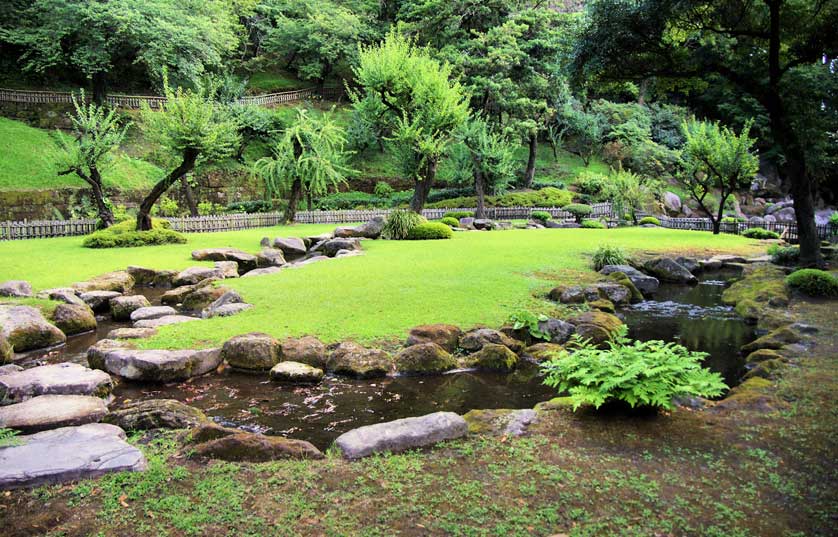 The Kyokusui Garden ("meandering stream" garden) was believed to have been built by the 21st Shimazu lord in 1702. It was rediscovered and restored in 1959. Poetry parties were held here in a tradition that goes back to the Heian Period.

The guests would sit along the banks of the stream and a lacquered sake cup was set in the water at the highest point. As the cup floated downstream the guests must write and read aloud a five line Tanka poem before the cup reaches them. Failure to do so meant the sake must be drunk, which doesn't sound to me like much of an incentive to write quickly. Kyokusui parties, though now called rituals, are still held at various shrines around the country, especially in Kyoto and at Dazaifu Tenmangu in Dazaifu. 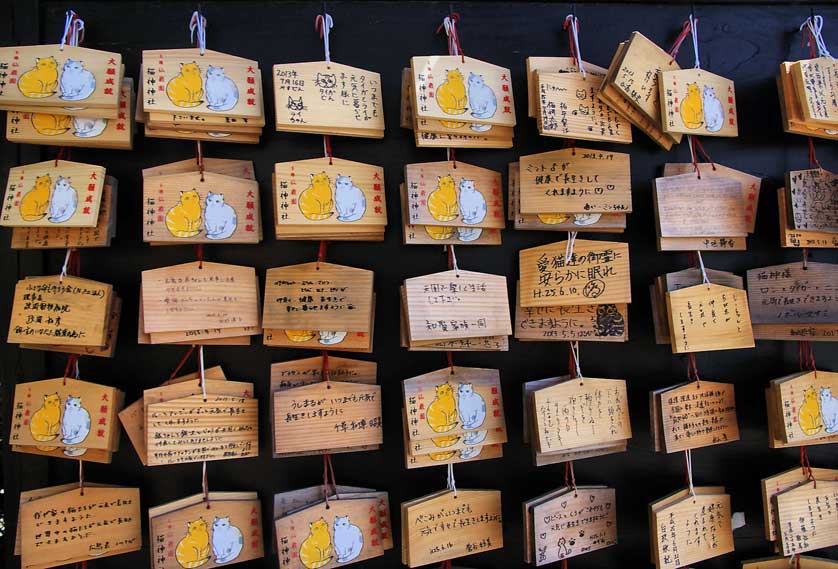 Yoshihiro  Shimazu, the 17th Shimazu Lord, was one of Hideyoshi's generals in his seven year war on the Korean Peninsula at the end of the 16th century. Yoshihiro took with him seven cats, not as pets, but as clocks! In China and Japan, and probably other countries too, it had long been known that the irises of cats' eyes responded to changes in light, at noon they are almost just vertical slits, at dusk and dawn completely open wide, so it is not too difficult to gauge, with practice, the current time by the shape of the cats iris.

Only two cats returned with Yoshihiro, and upon their death he had them enshrined in their own shrine at the castle. When the Shimazu family moved from the castle to the Sengan-en estate they brought the shrine with them. On June 10th each year watch and clock makers gather at the shrine for ceremonies. For the rest of the year the shrine is visited by thousands of cat lovers. Next to the shrine is gift shop selling cat related souvenirs and Ema, votive plaques, which can be bought and hung at the shrine. 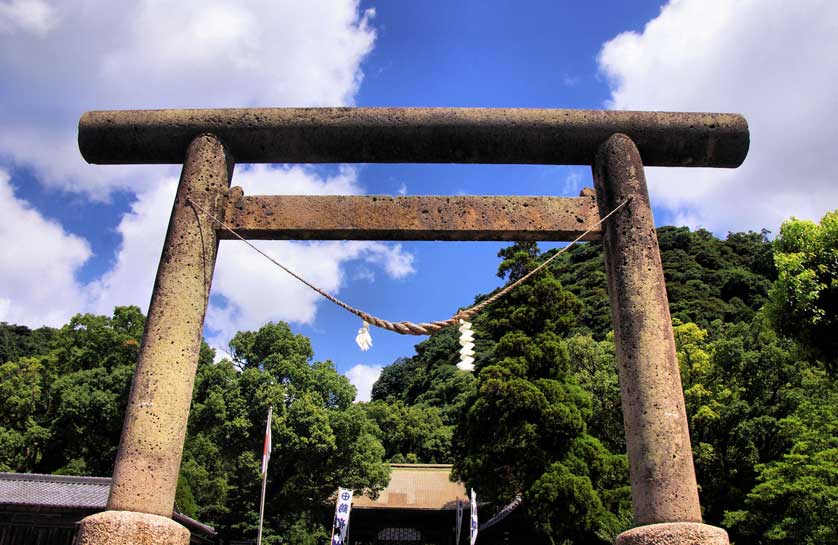 Located just outside the entrance to the gardens, on the site of the former Shimazu Family School, Tsurugane Shrine was founded in 1869 and moved to the present site in 1917. Enshrined here are the generations of the Shimazu family, but in recent times one in particular has become popular, Kamujuhime, the youngest daughter of Yoshihisa. No less a personage than Hideyoshi himself noticed and remarked on her beauty, and because of this reputation women come to the shrine nowadays to pray for beauty. Her first husband was her nephew but she later married her father-in-law who was also her uncle.

Senganen has a number of cafes and restaurants to enjoy local food including Okatei with Satsuma specialties, Shofu-ken with views of Sakurajima and Satsuma for local ramen noodles. 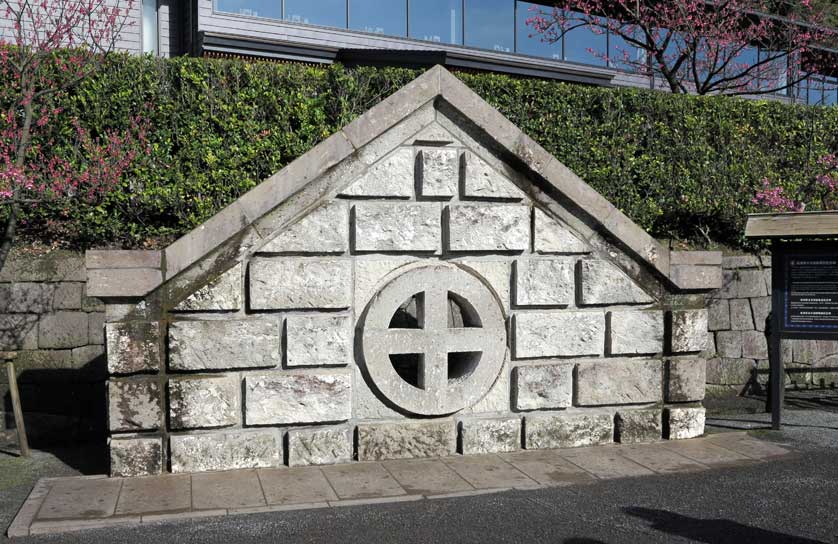 Stone monument to the Suitenbuchi Power Generating Station with the Shimazu family mon (crest), a cross within a circle, Senganen Gardens, Kagoshima, Kyushu 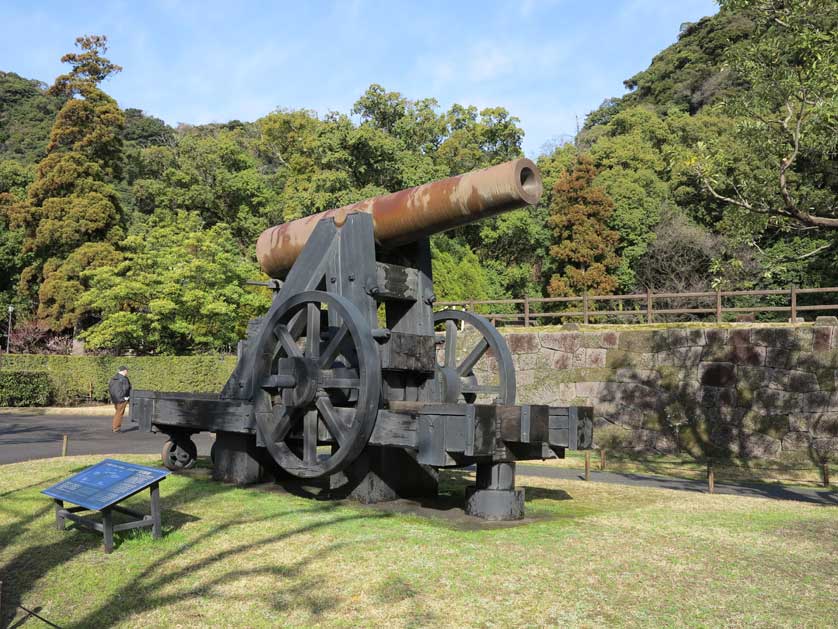 A number of buses run out to the Sengan-en-mae bus top including the Kagoshima City View Bus from Kagoshima Chuo Station, Kagoshima Aquarium and the Shiroyama Observatory. From Kagoshima Airport, Senganen is around 40 minutes by car.

With in a couple of hundred meters of the Sengan-en Garden are some preserved wooden houses from the late Edo and early Meiji Period. These include the The Foreigners Mansion (Ijinkan) and the former office of the Serigano Gold Mine.

Also of interest to fans of Japanese history is the Museum of the Meiji Restoration back near Kagoshima Chuo Station. 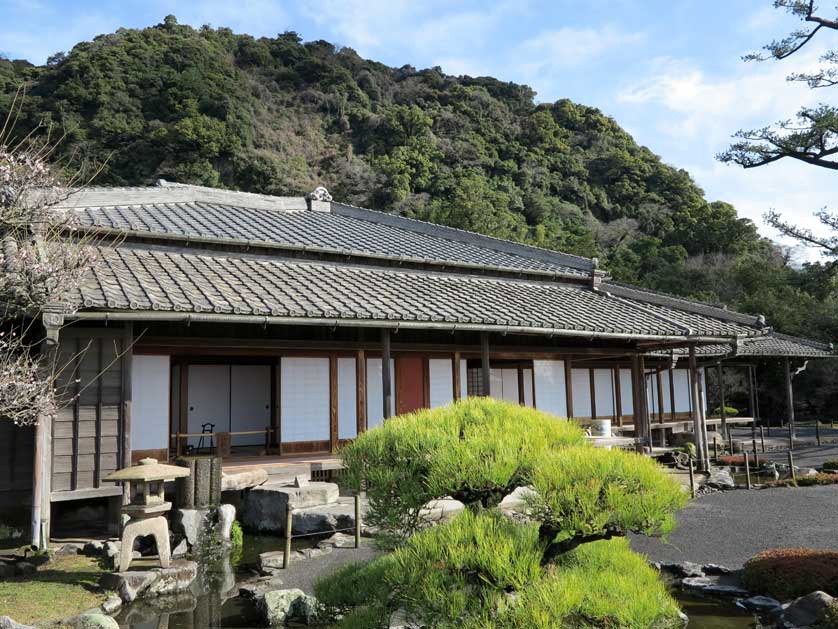 Flower Park Kagoshima, on the southern tip of Satsuma Peninsula, is the largest flower theme park in Japan with around 400,000 plants from 2,400 species laid out on a large, spacious site.