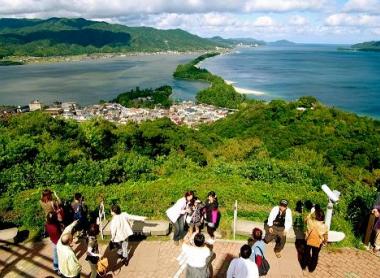 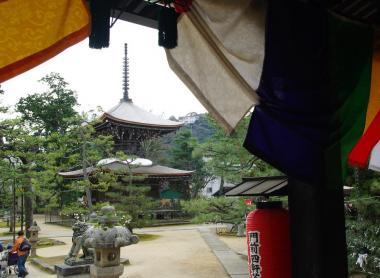 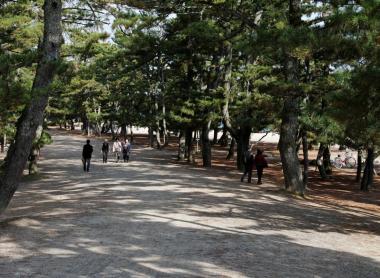 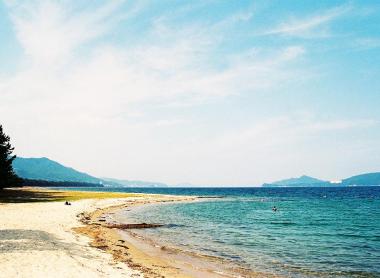 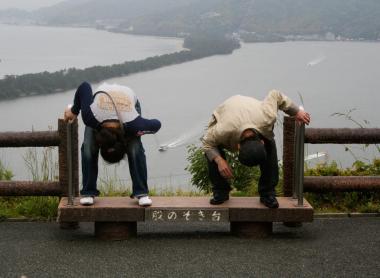 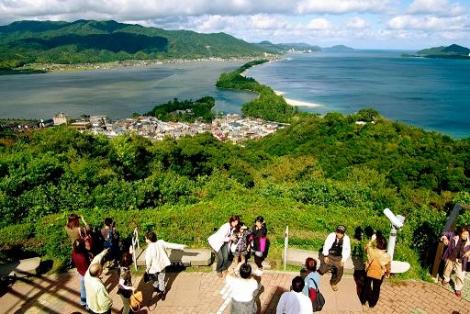 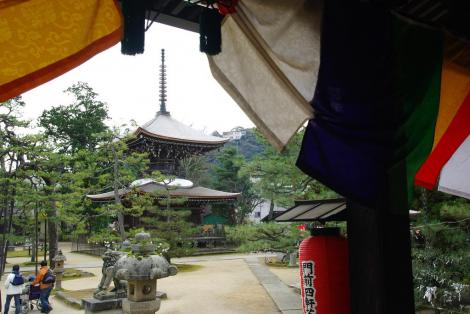 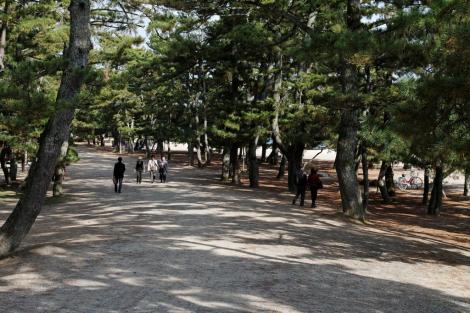 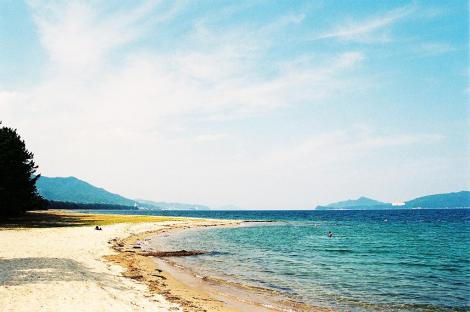 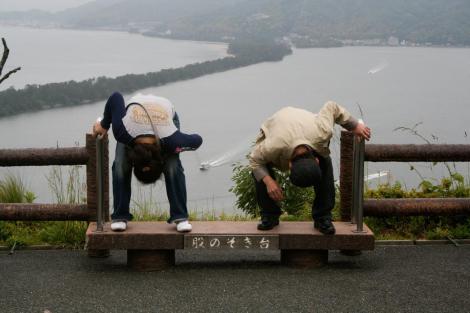 Sand in the sky

This thin sandbar, resistant from being engulfed by the waves of the Bay of Miyazu for centuries, holds a real fascination for many Japanese who come every year to enjoy the view... in a very peculiar fashion.

The peninsula of Tango and the entire northern coast of Chugoku are prized by inhabitants of Kyoto, Osaka, Kobe or Tottori seeking adventure, whether it's to make the rounds of the different onsen establishments in Kinosaki, or to admire the sights of Amanohashidate. Particularly beloved is a sandbank (a tombolo, specifically) 3.6 km long and 10m-40m wide, covered by thousands of pine trees.

The popularity of the "Bridge in the sky" (the literal translation of Amanohashidate) didn't develop overnight. The area was appointed by Hayashi Gaho, noted scholar of the seventeenth century, as one of the three most beautiful scenic views of Japan together with the torii of Itsukushima Shrine and the islands of Matsushima, off Sendai.

A popular custom, called matanozoki, requires visitors to turn their backs on the coastal strip, bend forward and admire the scenery by placing their head between their legs. This way, you get an impression that the sand bank is a bridge that floats in the sky.

From the station, you can stop at Chion-ji temple first, where Monju Buddhist figure of wisdom are honored, and whom students come to ask for success in their exams.

The sandbar can be admired directly from Mount Monju, where you will find Amanohashidate View Land. A cable car and monorail allow access to this small amusement park from which it is said that sandbar looks like a dragonfly in flight (¥850 for adults and ¥450 for children).

On the bridge of Amanohashidate

Crossing the sandbar makes for a very nice walk, especially in summer. You can admire pine trees that have grown in strange forms, which have even been given names. The crossing takes from 45 minutes to an hour depending on the pace of the walkers. It's also possible to rent bicycles near the train station. By bicycle, the crossing takes about twenty minutes.

After arriving on the other side you will find a shrine well worth a visit: Kono Shrine, where it is believed the major deities of the Shinto pantheon, Amaterasu and Toyoukehime, originate from. The deities are also honored in the famous Ise shrine (hence its nickname moto-ise, "Origin of Ise").

You can then take a cable car to go up to Kasamatsu Park to have the best view of the bank. It's also easily done on foot. This is where every day hundreds of visitors perform the ritual pose to admire the sandbar.

The bravest can continue the climb and visit Nariai-ji, the 28th checkpoint along the east Japan pilgrimage route (entry is ¥500 for adults and ¥200 for children). You can also get there by bus or cable car. The view over the bay and the temple is stunning!