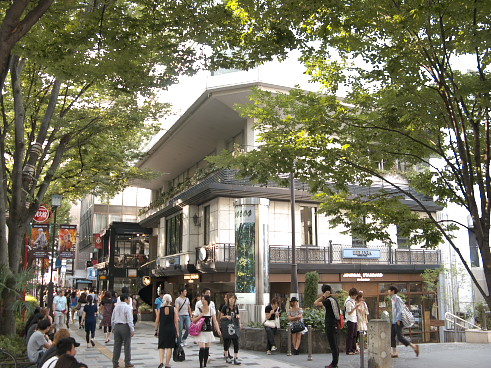 Aoyama is an area of Tokyo where all things hip come together: hip in its many forms. The generally upmarket youth-orientated shopping and cultural area of Aoyama is between Akasaka and Shibuya, offering a more cutting edge feel than Akasaka, but a more exclusive atmosphere than Shibuya.

Aoyama is high culture: novelist Haruki Murakami calls Aoyama home, and is where many of Japan's most popular writers pen their works.

Aoyama has something of a New Age vibe: Aoyama is the place to be if you feel like being pampered. Stroll along Aoyama-dori boulevard (Route 246) for a line up of health clubs, spas, massage, aroma therapy, as well as cafes, restaurants and specialty cuisine.

Aoyama is named after the Aoyama clan, prominent in the governing of Japan since the 16th century of Japanese history. As chief vassal to the Tokugawa shogunate, the chief of the Aoyama clan was made magistrate of Edo (as Tokyo was then known), and given a vast estate extending from Akasaka to Shibuya. The Aoyama district is between these two areas, and was the site of a particularly massive Aoyama clan mansion. 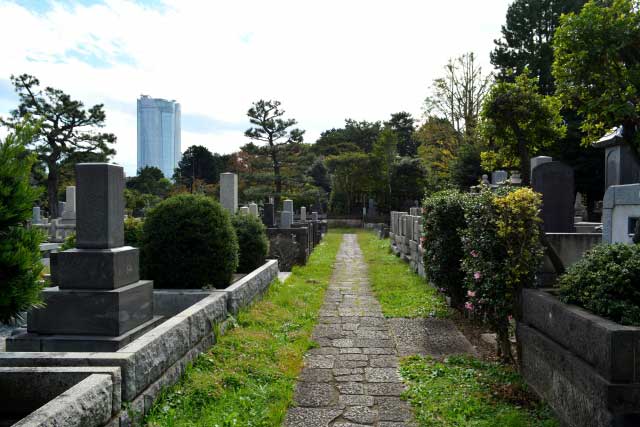 Aoyama Cemetery (Aoyama Reien) is in Minami Aoyama, just south of the Chichibunomiya Rugby Stadium and across Route 246.

Aoyama Cemetery, dating from 1872, is Japan's first public cemetery, and an Aoyama beauty spot. The landscaping is subtle, with a hint left of the wild, and there is a huge variety of styles of graves - most of them Japanese-style, but with a sprinkling of Westerners' graves, too. One unusual, but famous grave, is that of the dog Hachiko whose statue adorns an entrance of Shibuya station a little further east down Aoyama-dori.

A stroll through Aoyama Cemetery is worth it for the history, the beautiful flower arrangements on graves, the smell of incense, and the quietness and sense of calm.

Aoyama Cemetery is also a popular place to view cherry blossom in spring.

Killer-dori ("Killer Street") is an oddly-named street famous for its street fashion stores since the 1970's, located at the other end of Minami Aoyama, on Gaien-nishi-dori, starting at Aoyama Cemetery, crossing Aoyama-dori, and continuing along into the adjacent Jingu-mae area up to Senjuin intersection.

Regarding the name "Killer Street," one story goes that it was named Killer-dori by that Japanese pioneer of street fashion, Junko Koshino, to reflect just how "bad" (read "cool") the district was. Another theory is that doing business on this street of ever-fickle fashion is more likely than not to end in that enterprise's untimely demise.
Google Map to Killer Dori 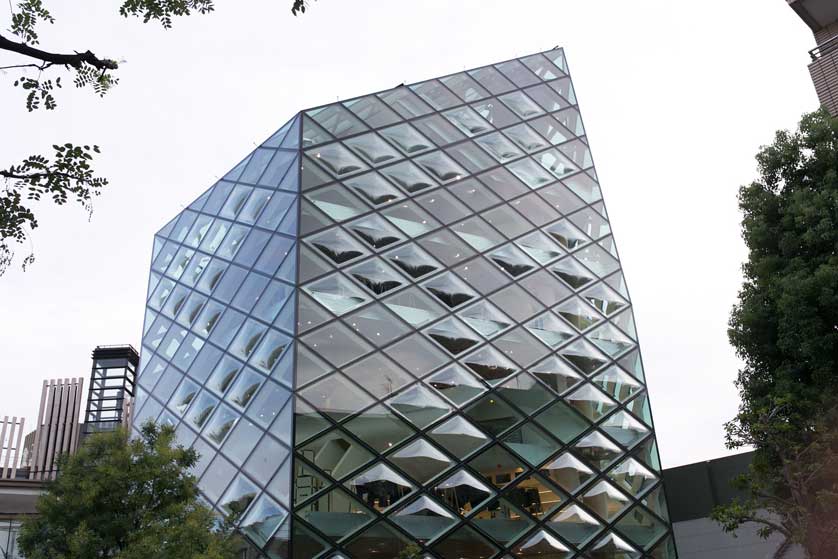 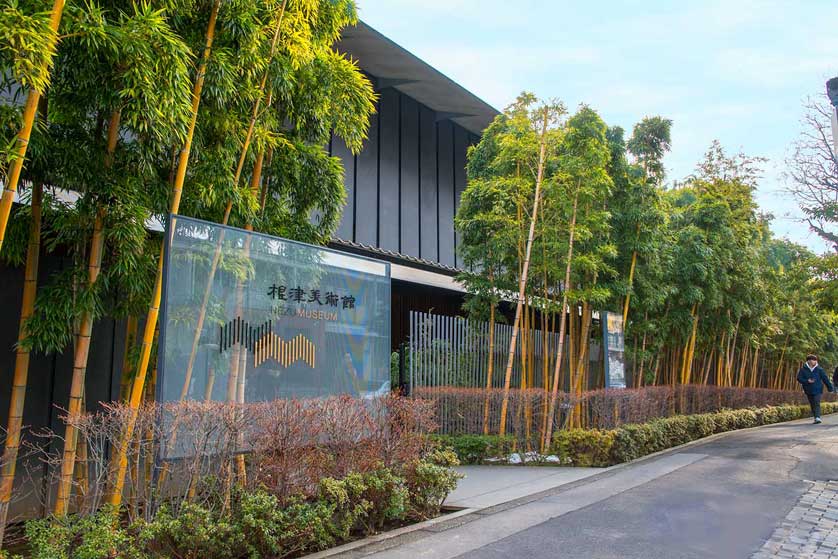 The Nezu Museum in Minami Aoyama is based on the personal collection of pre-modern Japanese and other Asian art that belonged to the late president of the Tobu railway, Kaichiro Nezu, (d.1940), since augmented by donations of other private collections.

The Nezu Museum is a must-see if you are in the area, not least for its charming natural-style garden in a small valley, dotted with ancient stone statues and monuments and featuring a pond and tea ceremony house. The Museum is located at the lower end of Omotesando boulevard.

Chokokuji Temple, right next to the Nezu Museum, has a 10m-high statue of the Buddha in its Kannon-do Hall.

The Prada building, just south of the Omotesando intersection in Minami Aoyama is a spectacular, six stories of "insect-eye" glass designed by Swiss architects Jacques Herzog and Pierre de Meuron, built in 2003 at a cost of US$80 million.

Chichibunomiya Rugby Stadium is at the east end of Kita Aoyama, next to Akasaka and just north of the Aoyama Cemetery. Next to and just north of Chichibunomiya Rugby Stadium is the Meiji Jingu Gaien sport area with the Jingu Ballpark, Gaien Golf Practice Grounds, Japan Youth Hall, and the huge National Stadium (all actually in neighboring Kasumigaoka-machi, not Kita Aoyama itself).

Omotesando boulevard is a broad, beautiful, sloping tree-lined street full of mid- to high-range fashion, dining, cafes and boutiques. Any fashion house not represented on Omotesando is by definition minor.

Omotesando is one of Tokyo's most famous shopping streets, straddling the more refined Minami Aoyama and and more populist Kita Aoyama. Omotesando leads to the Jingu-mae and Harajuku districts. 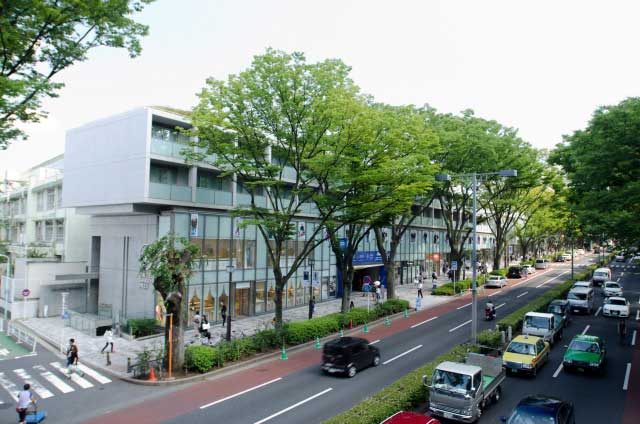 Omotesando Hills is Omotesando's biggest shopping attraction, opened in 2006 by Minoru Mori, the same developer who created Roppongi Hills in the Roppongi district.

Cat Street (the nickname for Kyū-Shibuya-gawa Yūhodōro, often shortened to "Yūhodō") is a famous fashion street that goes all the way from Harajuku, crosses Omotesando (where the Gyre shopping center is) and continues as a pedestrianized street to Miyashita-koen intersection in Shibuya. Cat Street was created over a now subterranean stream in 1964, at the time of the Tokyo Olympics. It is lined with exquisitely fashionable boutiques, and, especially from Omotesando westwards, where it becomes pedestrianized, Cat Street is a very pleasant alley to stroll along and take in what's hippest in Tokyo fashion. Read more about Cat Street.

The Kodomo no Shiro (National Children's Castle) on Aoyama-dori, in the Shibuya direction. As well as being an educational and entertainment public space for children, it has the Aoyama Gekijo Theater on the 1st floor, and the Aoyama Round Theatre on the 3rd floor.
Look for the distinctive Taro Okamoto statue in the fore court.
Google Map to the National Children's Castle, Tokyo

The United Nations University is next to the National Children's Castle on Aoyama-dori. 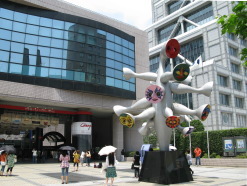 Aoyama, Tokyo. Read about the Aoyama area of Tokyo, between Shibuya and Akasaka. Aoyama is an upmarket, youth-orientated area of Tokyo.