Tegarayama Central Park Himeji is a large hilltop park with quite a range of facilities and some unusual sites including museums and an amusement park.

Tegarayama Central Park is a large hilltop park in central Himeji, in Hyogo Prefecture with quite a range of facilities and some unusual sites. 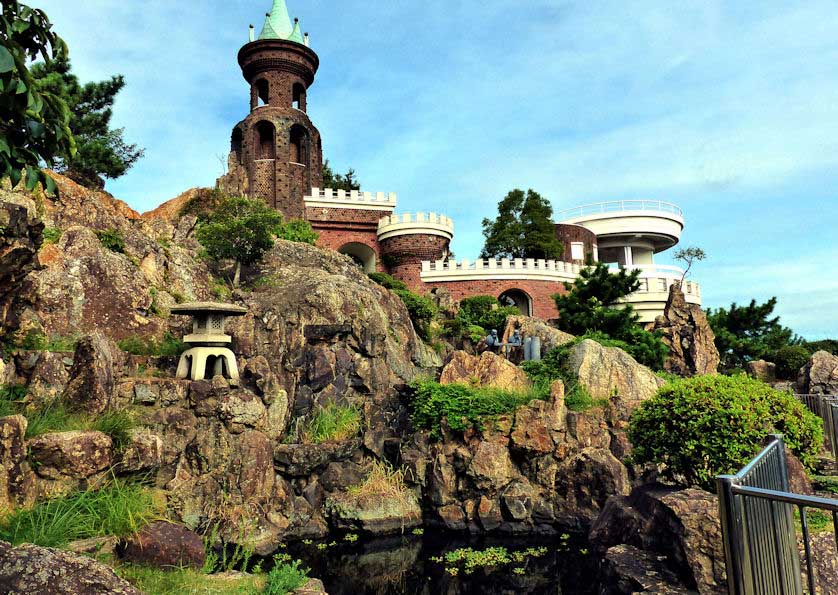 In its current form the park was constructed in 1966 for the Himeji Expo. This was not a full, World Fair Expo.

The first postwar World Fair Expo was held four years later in Osaka. It is hard to find much info about the Himeji Expo, so I suspect it was not wildly successful.

Approaching the park from Himeji Station, the hilltop appears to be a castle with lots of red brick battlements and towers looking like some sort of faux European fortress.

From the very top of the park there are extensive views from the towers and observation decks and the gleaming white Himeji Castle is clearly visible. You can also see the rope-way station on top of Mount Shosha. Paths wind around rocky outcrops and water features. 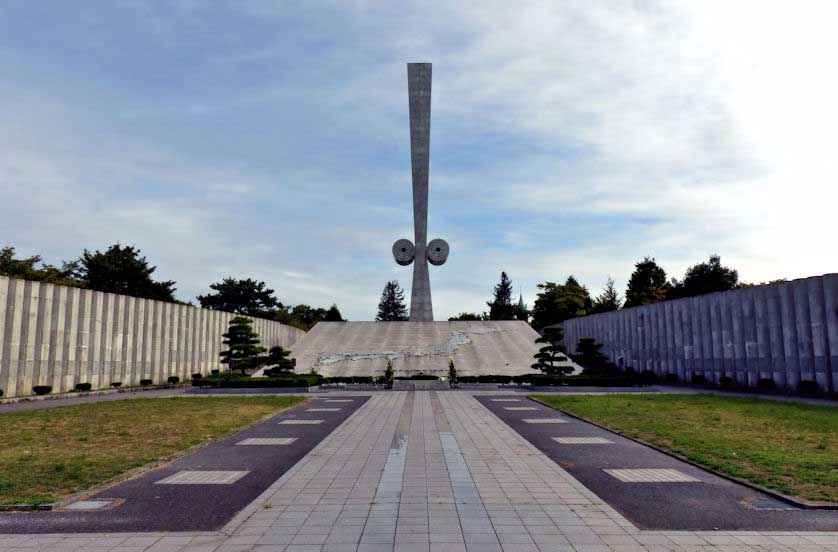 Just below the very top of the hill is a wide, spacious memorial, the centerpiece of which is a tall tower representing a sword thrust into the ground, symbolizing the end of war.

That night the USAF dropped 767 tons of incendiary bombs and destroyed more than 60% of Himeji, although Himeji Castle miraculously escaped serious damage.

Lower down the hill is the Himeji Peace Museum which also is primarily about the air raid on Himeji.

Not far from the Peace Museum is a curious-looking structure, very similar to the iconic control tower at Los Angeles Airport. This was a rotating observation deck and cafe that took 14 minutes for each rotation. Unfortunately time has take its toll on the building and it is now permanently closed. 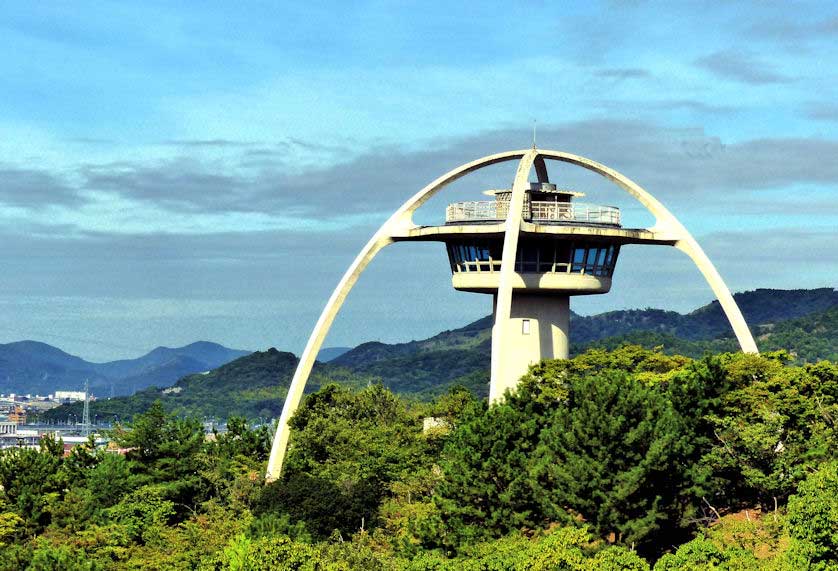 Modeled on the control tower at LA Airport, until closed in 2018, the observation deck and cafe rotated 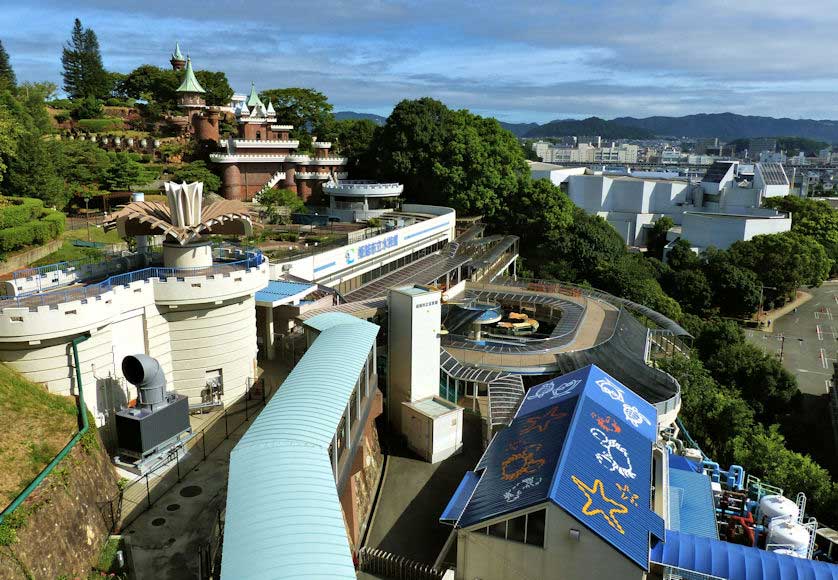 On the east side of the park, facing the station, is the Himeji City Aquarium. It is a small aquarium, with no big tanks, and not really any exotic species, concerning itself mostly with the aquatic life of the area around Himeji. There is little information in English, but young kids will probably find enough to be interested. 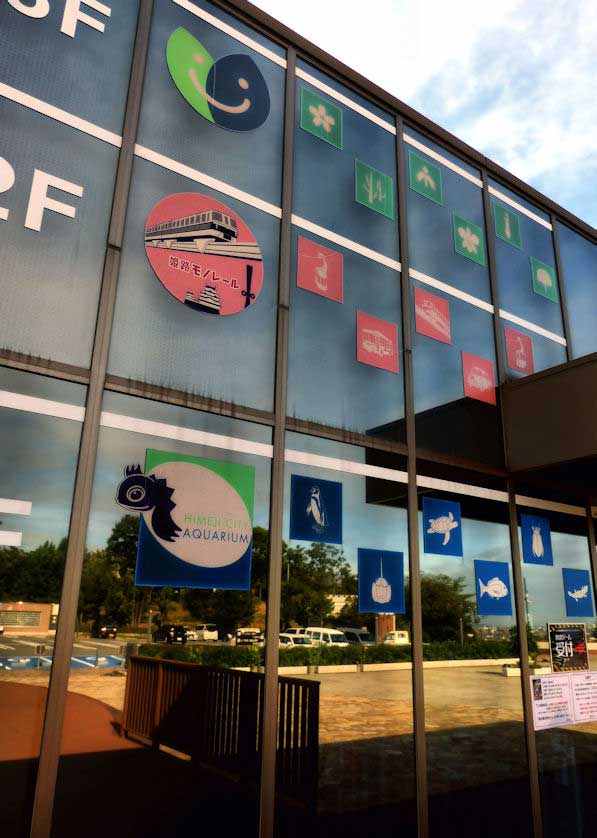 In the same building as the entrance to the aquarium is the Himeji Monorail Museum, dedicated to the short-lived monorail that ran 1.6 kilometers to Tegarayama Park from Himeji Station.

This building was the actual station and the platform and monorail train are on display as well as various exhibits about the monorail system that was built in 1965 for the Expo. There was one other station between the park and Himeji Station that ran through the 3rd and 4th floors of a ten storey building.

It was planned to extend the monorail south to the coast and even as far north as Tottori Prefecture, but the system was little used after the Expo and so was closed down in 1974. Parts of the elevated track are still standing in the town. 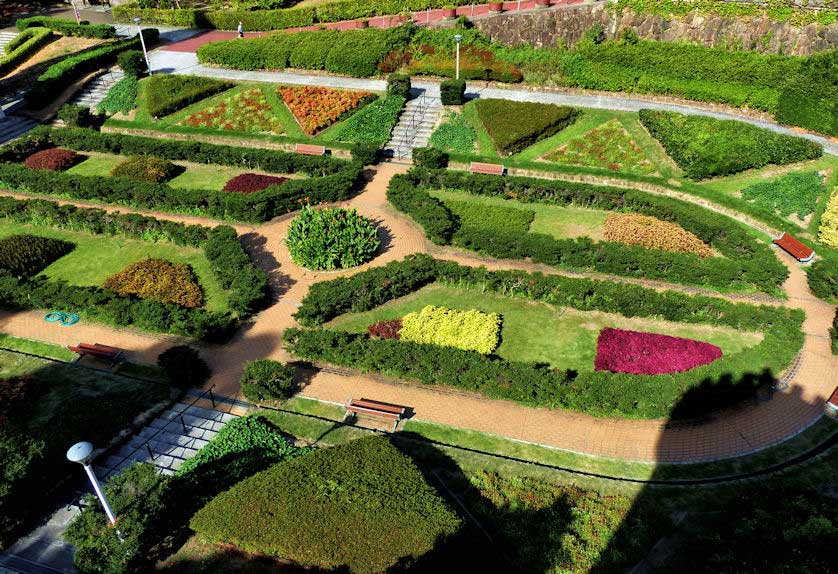 The formal garden and flower beds at Tegarayama Park in Himeji

The lower slope of the park is a more formal garden with flower beds and the paths lead to the Himeji Botanical Gardens. Not huge, but with quite a nice selection of plants in the greenhouses. Cacti and succulents are well represented.

The gardens have changing exhibitions, the one that was on when I visited was on carnivorous plants and was quiet interesting. There are several stadiums nearby and at the base of the park to the west is a small amusement park.

Tegarayama Amusement Park has a few rides like a small Ferris wheel and roller coaster, pony rides, a miniature train etc as well as play areas, but is used mostly for the pools and water-slides in the summer. 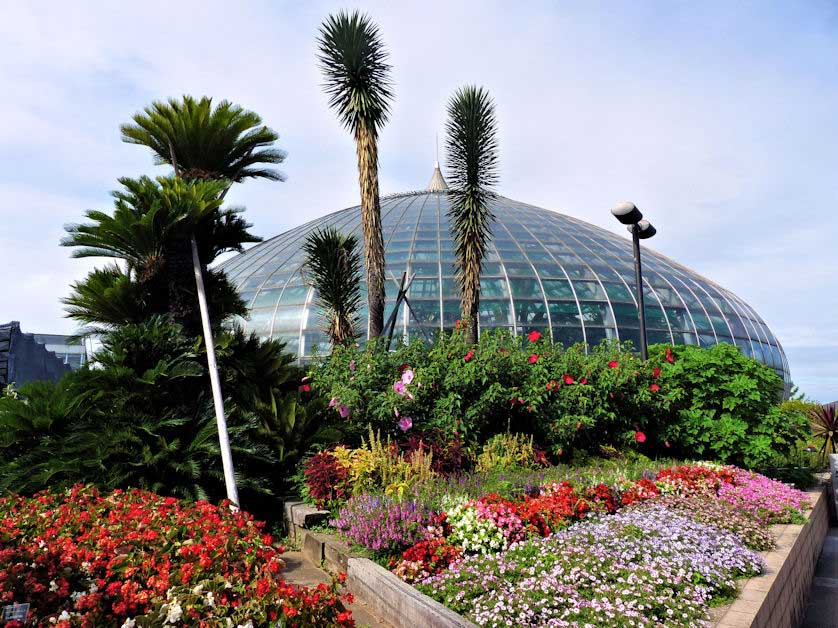 The entrance to the Monorail Museum is in the same building. It has the same hours but free entry.

Tegarayama Amusement ParkTel: 0792 96 0503Open from 10 am to 5 pm most of the year, 9.30 am to 6 pm during the summer.Closed on Tuesdays and Wednesdays, but open every day during summer months. 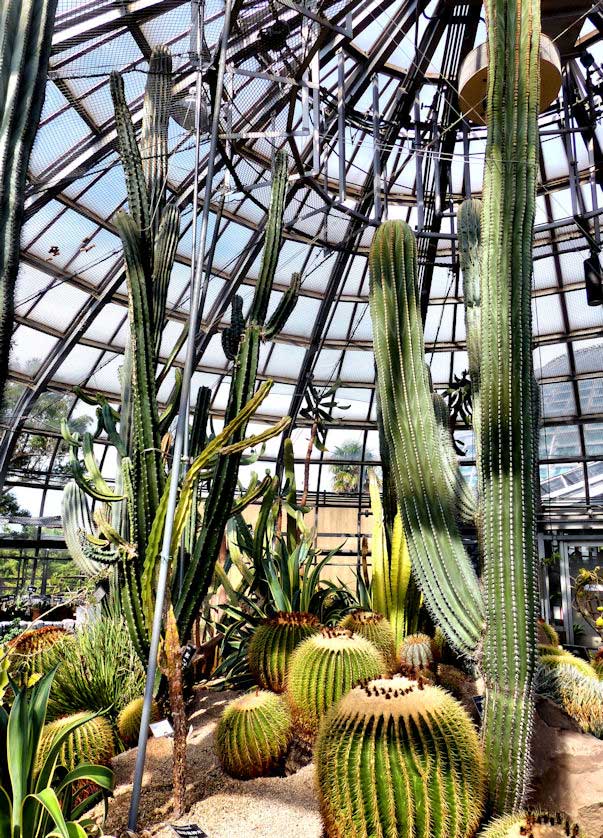 Display of cacti in the Himeji Botanical Garden

Tegarayama Central Park is located a little over a kilometer and a half southwest of Himeji Station.

It is a ten minute walk from Tegarayama Station on the Sanyo Railway. Alternatively, take a 94 bus from the north-side of Himeji Station, or a 97 bus from the south-side and get off at Tegarayama Chuo Koen stop. On Saturdays, Sundays, Holidays, and during the summer a special Tegarayama Loop Bus operates.

Himeji is an easy day-trip from Osaka, Kobe, Kyoto or Hiroshima.

Himeji is a stop on the Tokaido/Sanyo Shinkansen Line and is 3 hours 20 minutes by bullet-train from Tokyo.Visitors can also take a shinkaisoku JR express from Kyoto (90 mins), Osaka (1 hour) or Kobe (40 mins).

Koko-en Garden Himeji is a modern garden opened in 1993. There are nine different types of garden, all based on styles popular during the Edo Period.

To the west of Himeji castle, an area once home to the lord and his bodyguards, now lies a lavish garden.