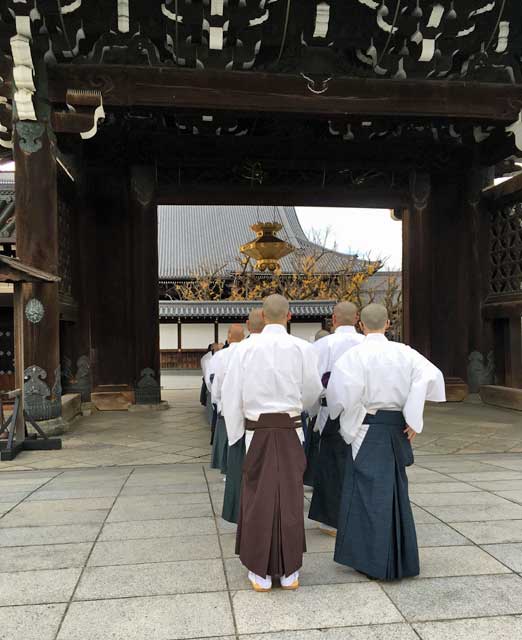 The Jodo Shinshu sect of Japanese Buddhism was founded in 1272 by Shinran, a follower of Honen, and is based on the teaching that chanting the nembutsu - Praise to the Amida Buddha - can lead to individual salvation. Jodo Shinshu grew rapidly among the common people, due to its simplicity, and in 1591 Toyotomi Hideyoshi granted the sect the land to build their great temple in Kyoto.

The sect's previous headquarters at Ishiyama Honganji in Osaka had been destroyed by Oda Nobunaga, in his campaigns against the Ikko sect, militant lay believers in Jodo Shinshu. Osaka Castle was later built on the same site by Hideyoshi and he may well have offered the site in Kyoto as a kind of pay-off to the sect.

Of greater interest of the two Honganji temples is possibly the more ornate Nishi-Honganji west of the north-south Horikawa Street. The narrow streets between the two temples contain many stores selling incense and Buddhist artifacts including mokugyo, temple bells and bowls.

Across the street from Nishi-Honganji is the newly opened (2011) Ryukoku Museum which is dedicated to Buddhism from its birth in India, its spread throughout Asia and arrival in Japan. Just north of Ryukoku Museum is the Costume Museum with displays of costumes from the Heian Period (including reproductions of clothes worn by the characters in The Tale of Genji) to the present day. Just to the south of Nishi-Honganji is the affiliated temple of Koshoji, founded by Kyogo, a follower of Rennyo, the 8th head priest of Honganji.

Shosei-en Garden (Kikokutei) to the east of Higashi Honganji Temple is the villa of the abbot of Higashi Honganji and contains a landscape garden designed by Jozan Ishikawa (1583-1672) and Enshu Kobori. Some of the buildings were originally part of Hideyoshi Toyotomi's Fushimi Castle in the south of Kyoto. 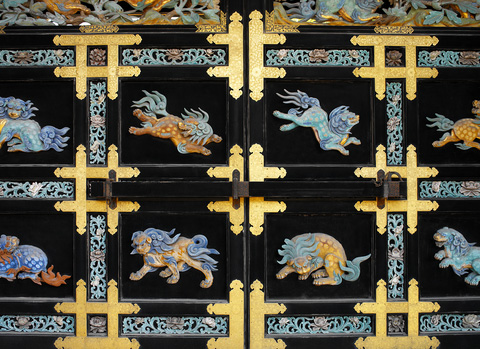 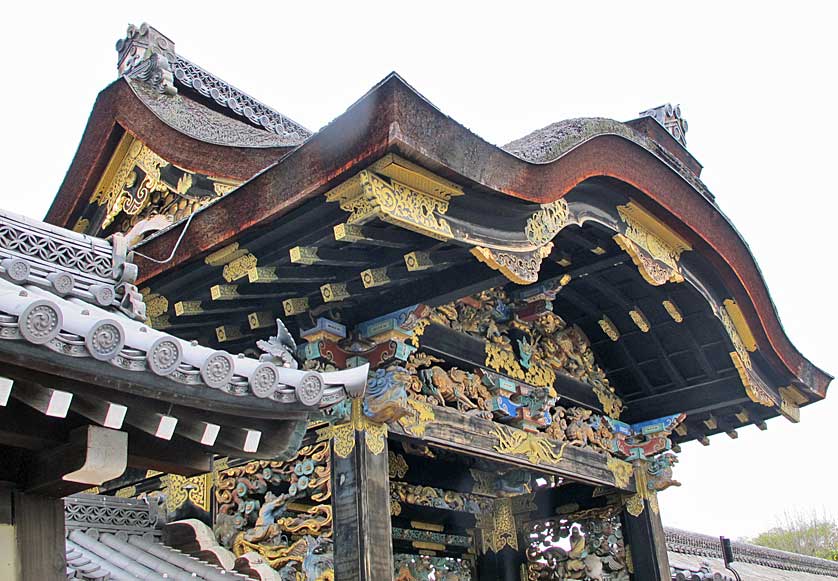 The Nishi-Honganji Temple (Western Temple of the Original Vow) is the headquarters of the Honganji branch of Jodo-Shinshu sect of Buddhism with millions of followers throughout the world.

Nishi-Honganji Temple was built in 1591 by the warlord Toyotomi Hidetoshi and is considered one of the finest examples of architecture from the Azuchi-Momoyama Period (1573-1603).

The main buildings in the temple precincts all contain priceless Buddhist images, carvings and statues, including an image of Shinran, believed to have been carved by the Buddhist master himself. The portraits on the walls are of the successors to Shinran as abbot of the temple.

The Daishido or Founder's Hall originally dated from 1636 and includes the seated image of Shinran, said to be self-carved. After his death the image was varnished with lacquer mixed with his ashes.

The Hondo or Main Hall was rebuilt in 1760 after it was destroyed in a fire. The Main Hall of Nishi Honganji contains priceless sliding screens by the founder of the Kano school of artists and portraits of Prince Shotoku (573-621) and the Buddhist priest Honen (1133-1212).

The inner sanctuary of the Daishido contains a tablet with the characters Ken-Shin (見真), written by the Emperor Meiji. Ken-Shin was the posthumous Buddhist name bestowed on Shinran by the Emperor in 1876.

Inside the Daishoin Hall (Great Scripture Hall; 大書院) are the Shoin inner reception rooms with tatami floors for the head priest and his followers which are divided into two main rooms: the Taimen-jo and Shiro-shoin which are then further sub-divided into smaller spaces; all the rooms are ornately decorated with carvings, murals, sliding doors and screens and were originally the state rooms of Hideyoshi Toyotomi at Fushimi Castle, hence their magnificence.

The Taimen-jo is divided into two spaces by an openwork screen or transom depicting geese by Jingoro Hidari. The abbot's chamber is known as Ko-no-ma or Stork Chamber and has paintings by artists of the Kano School and Okyo Maruyama.

Other treasures of Nishi-Honganshi Temple include two Noh stages, one brought from Fushimi Castle and the Hiunkaku Pavilion in the south east corner of the grounds which contains Hideyoshi's tearooms, bathroom and a rest chamber. The three-story structure is full of classic Kano School art and the painting of a pine grove on the top floor may even have been done by Hideyoshi himself.

The four-legged Karamon Gate features carvings depicting Chinese history on its sides, Chinese lions (kara-jishi) on the front and a roof in the Irimoya style.

Both the Daishoin Hall and Kara-mon gate were brought to the temple from Fushimi Castle. 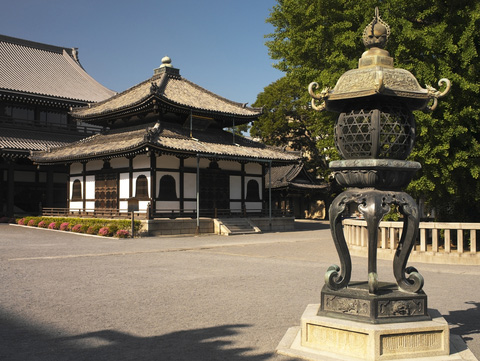 There is free admission to the temple grounds but visits to the inner quarters and buildings are permitted four times a day at 10 am, 11 am, 1.30 pm and 2.30 pm. 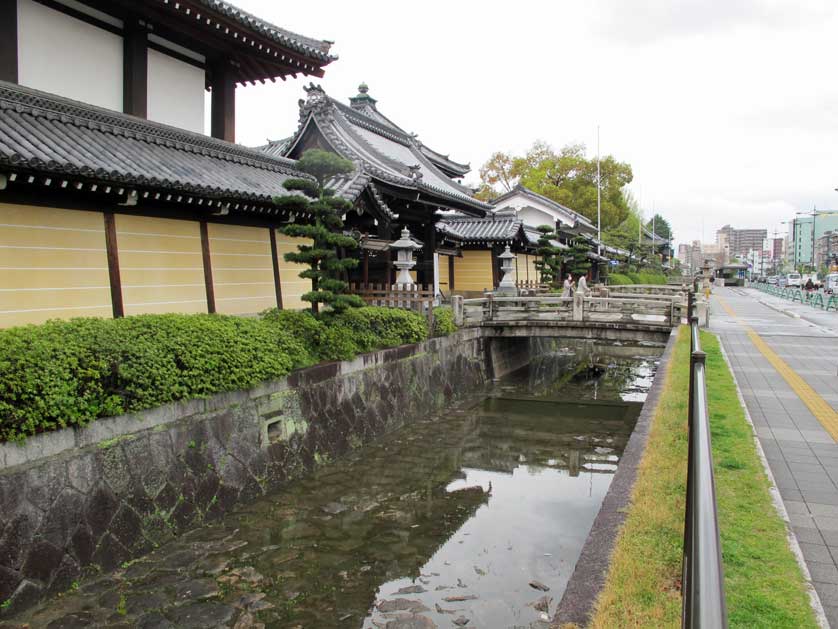 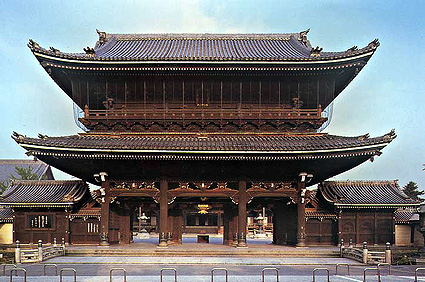 In the early 17th century, the first Tokugawa Shogun Ieyasu, fearing the great wealth and power of the Jodo-Shinshu sect, engineered a rift in the Buddhist school and built Higashi-Honganji to rival its neighbor Nishi-Honganji. Higashi Honganji (Eastern Temple of the Original Vow) became the Otani branch of the original school.

The present buildings (which are undergoing extensive renovation), date from 1895 after the original structures were destroyed in repeated fires. The money for rebuilding in the 1890s was raised from contributions from followers throughout Japan and include 50 huge ropes made from human hair donated by female devotees, examples of which can be seen inside the temple.

Beyond the huge two-story Daishido-mon Gate is the Daishido or Founder's Hall containing another image of Shinran said to have been carved by the man himself. The massive wooden columns are of zelkova wood and there are portraits of the abbots of the temple since Shinran.

The Hondo or Main Hall connects via a corridor and contains an image of the Amitabha Buddha by Kaikei. As in Higashi-Honganji there is a Noh stage and buildings that were once taken from Fushimi Castle, though the Chokushimon or Chrysanthemun Gate is a replica of the original, which burned down in 1911. The temple contains images of the Amitabha (Amida) Buddha by Prince Shotoku (574-622) and the noted 11th century sculptor Jocho as well as the Kyogyoshinsho - the original six-volume tenets of Jodo Shinshu written by Shinran and dating from 1224.

There is also a Higashi-Honganji Temple in Nagoya built in 1692 and entirely reconstructed in 1836. 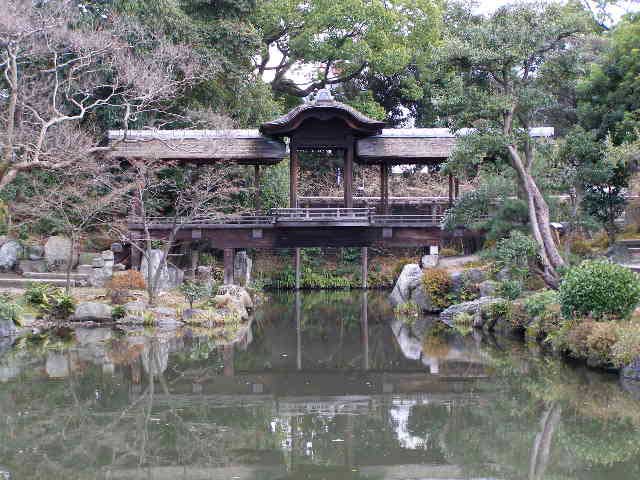 Shosei-en Garden is affiliated with Higashi Honganji Temple in Kyoto