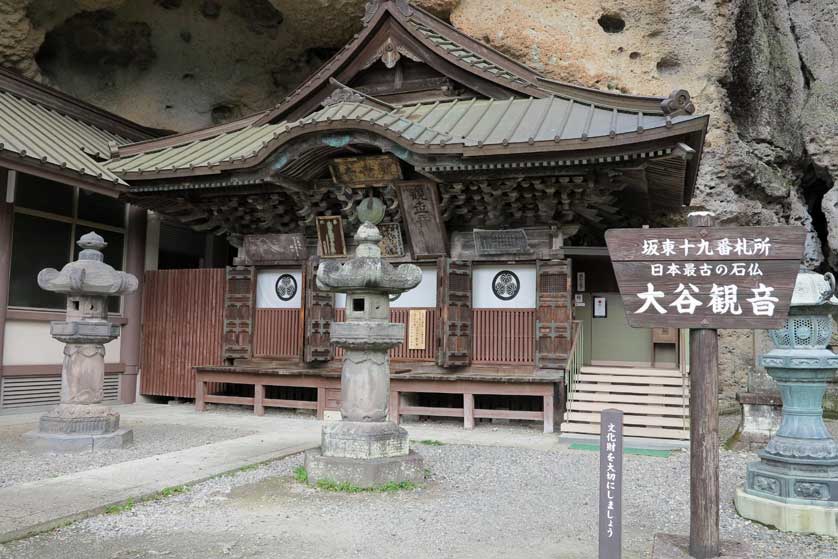 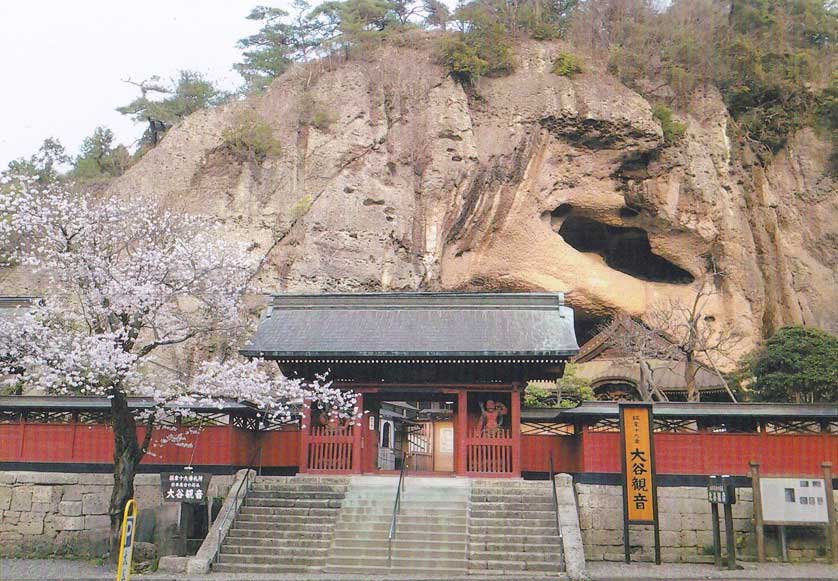 Oyaji Temple in the town of Oya, just 7 km north west of Utsunomiya in Tochigi Prefecture, is believed to have the oldest relief statues of Buddhist images in Japan.

The temple is carved in to a vertical rock face of Oya stone and the resulting cavern holds a series of impressive Buddhist relief statues (magaibutsu).

Other early, Heian Period relief figures in Japan are mostly found in the Kunisaki Peninsula in Oita Prefecture, Kyushu at Bungo Ono and Usuki. 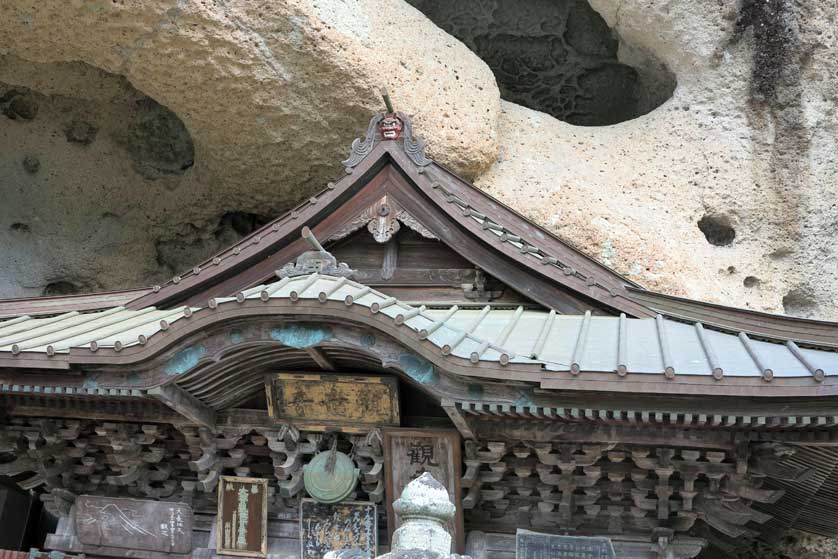 History of the Temple

The temple is said to have been founded by Kukai (Kobo Daishi) in 810 during the Heian Period of Japanese history. However, this is open to some considerable doubt.

The main image of the temple is a stone carving of the Goddess Kannon, the Senju Kannon. In Japanese Buddhism, Kannon is the Goddess of Mercy.

The Senju Kannon, also said to have been carved by Kobo Daishi, is almost four meters high and it features the goddess as having "a thousand" arms, holding an eye in each hand, "representing the desire to save mankind".

The statue is flanked by carvings of Fudo Myo-o and Bishamonten. 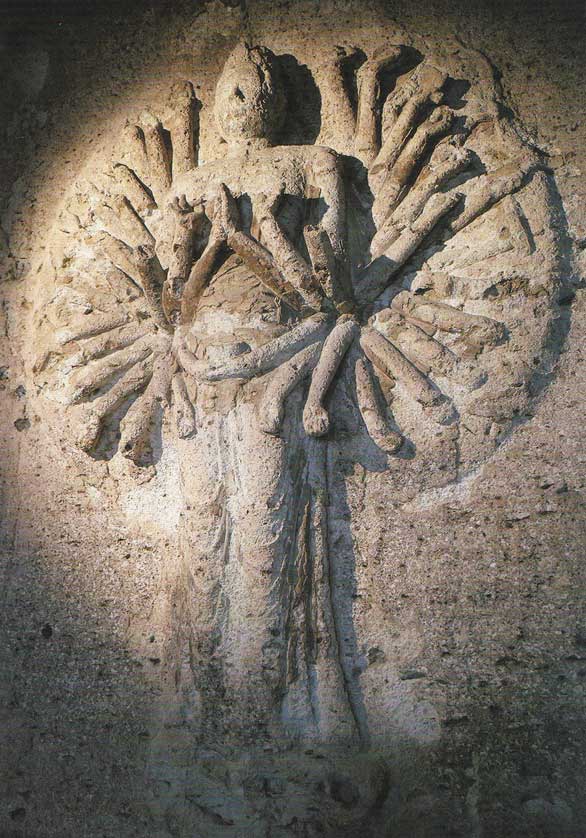 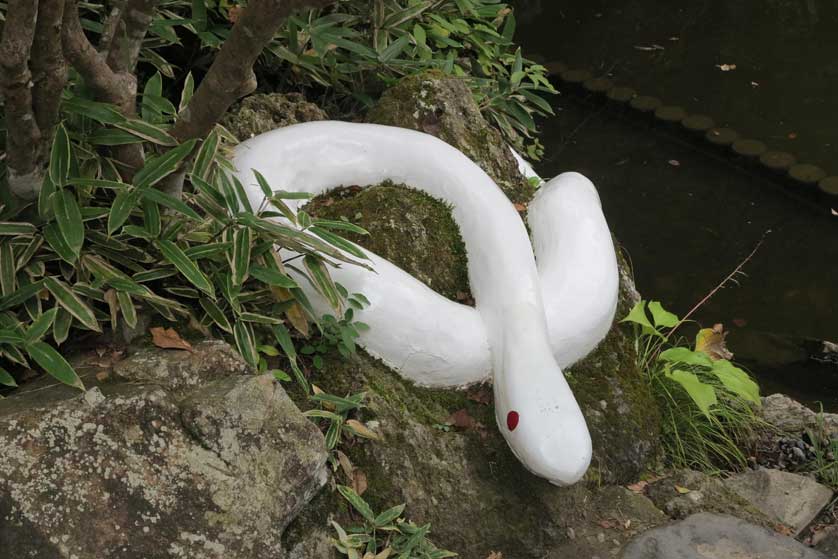 Legend of the White Serpent

As so often, there is a legend (engi) associated with the origins of the temple.

In ancient times, a well of clear fresh water was sprouting forth from a hidden dent in the rock front. However, in the well lived a venomous serpent and from time to time, the serpent would spit its poison into the water, killing people who merely touched the water.

When Kobo Daishi passed through the area, the villagers told him about their troubles with the snake. Kobe Daishi went into the hidden dent and when he emerged again (here the accounts differ, some say after one night, others after ten days), he told the villagers that he had taken care of the snake.

Kukai said goodbye and went on his way. When the villagers themselves entered the cave, they were greeted by the shining carving of the Senju Kannon.

The serpent had been transformed into a white snake, embodying a benevolent Indian god. To this day, in a small red tower in the temple's Japanese garden, a living white snake is kept along with a stone image of the animal in the pleasant temple garden.

Inspired by Kobo Daishi, the villagers became devout Buddhists, so the story goes, and erected the temple surrounding the Senju Kannon.

More recent research came up with very different but no less remarkable assumptions about the origins of the Senju Kannon.

Comparative studies claim close similarities between the Senju Kannon and ancient stone carvings in Bamiyan Valley, Afghanistan. An unknown Buddhist stone carver from Afghanistan might have made his way to Heian Period Japan (794-1185) and created the Senju Kannon, the researchers concluded.

Besides the Kannon carving, the temple also houses a number of Buddha carvings from the same period of the Senju Kannon.

These are arranged in three groupings of three reliefs with nine statues in all. 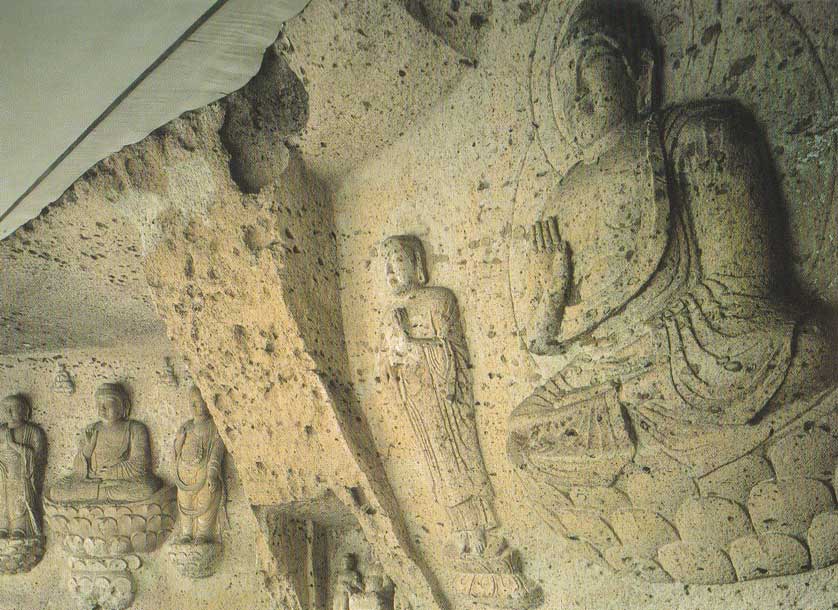 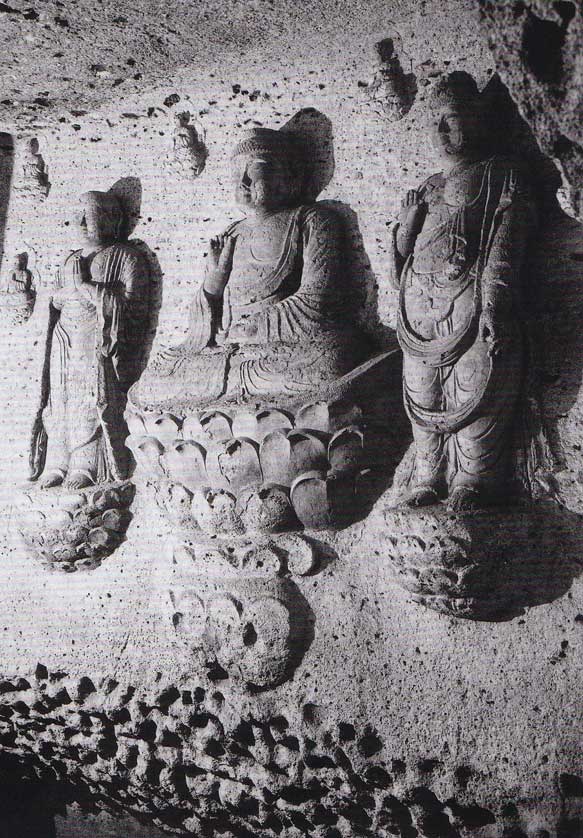 The temple garden at Oyaji contains the white snake figure as well as several lotus ponds, vermillion-painted bridges and pavilions.

The spacious garden is a very pleasant place to stroll after emerging from the confines of the cavern holding the relief carvings.

One shrine is dedicated to Benzaiten, the goddess of wisdom and compassion and one of the Seven Lucky Gods of Japan (Shichifukujin). Benzaiten is often found near water and is believed to have the power to overcome snakes. 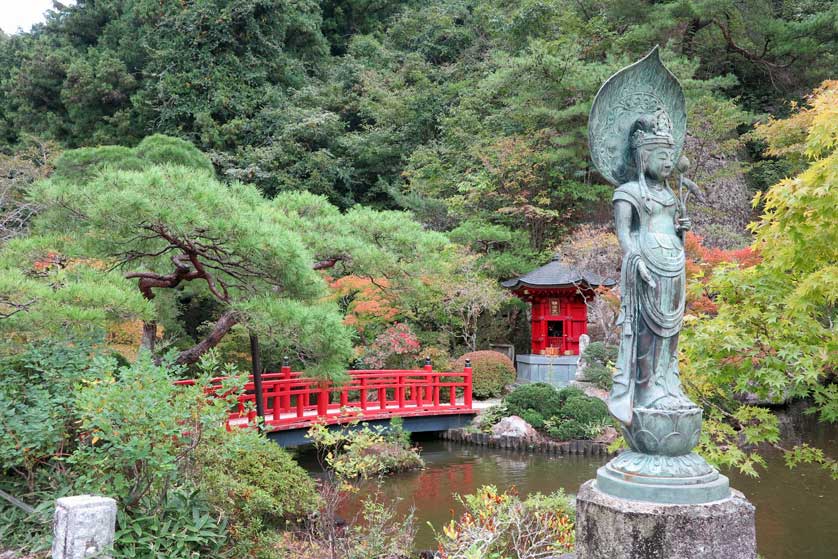 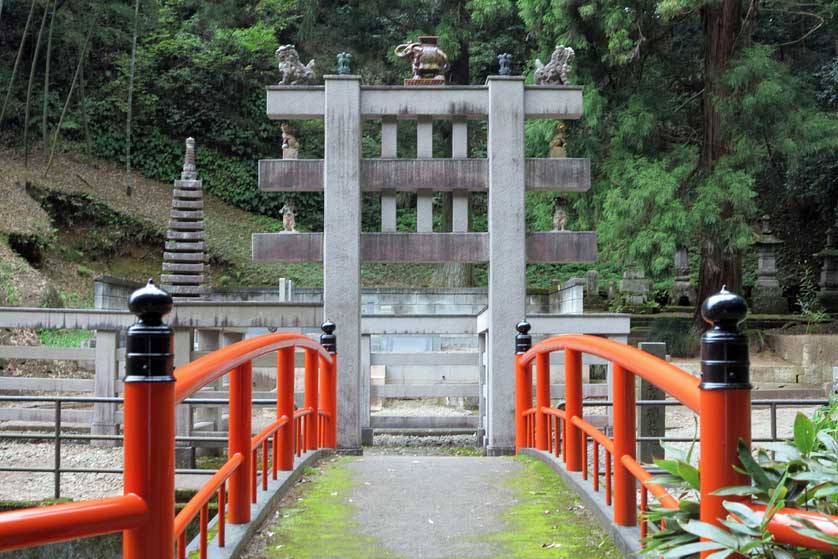 A 15 minute walk beyond the garden is Otome Hill, a place of scenic beauty and designated as such in Tochigi Prefecture along with Kegon Falls in nearby Nikko.

During the Edo Period the area was off limits to allow the Imperial family to collect matsutake mushrooms. Hence the name, Otome - meaning "Stop."

A stone monument at the top of the hill commemorates a visit here by Emperor Taisho. 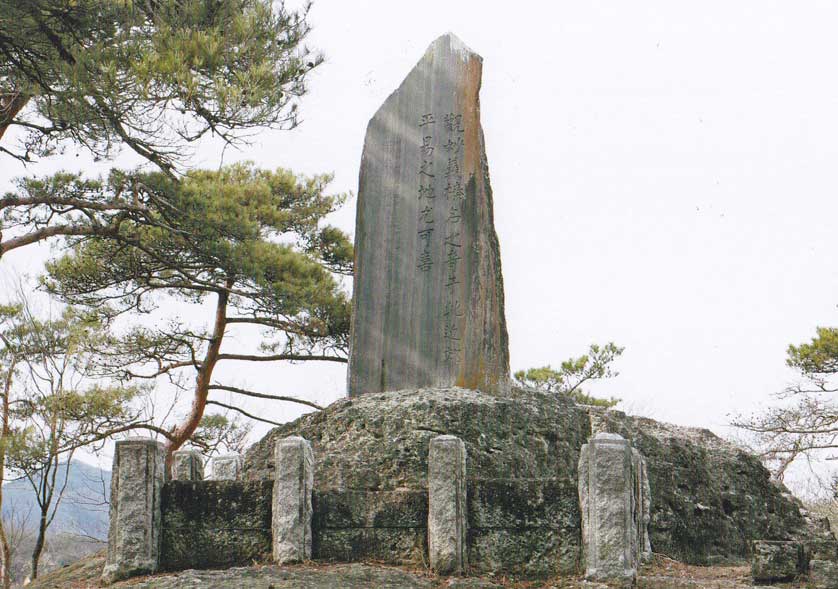 On the walk to the temple from the car park and bus stop to Oya Park off Oya Kaido is the Heiwa Kannon Statue.

This impressive and sturdy 27 meter tall image of Kannon, carved in Oya stone, from a former quarry, was constructed after World War II from 1948-1956. The statue serves to remember and honor the victims of that tragic conflict. 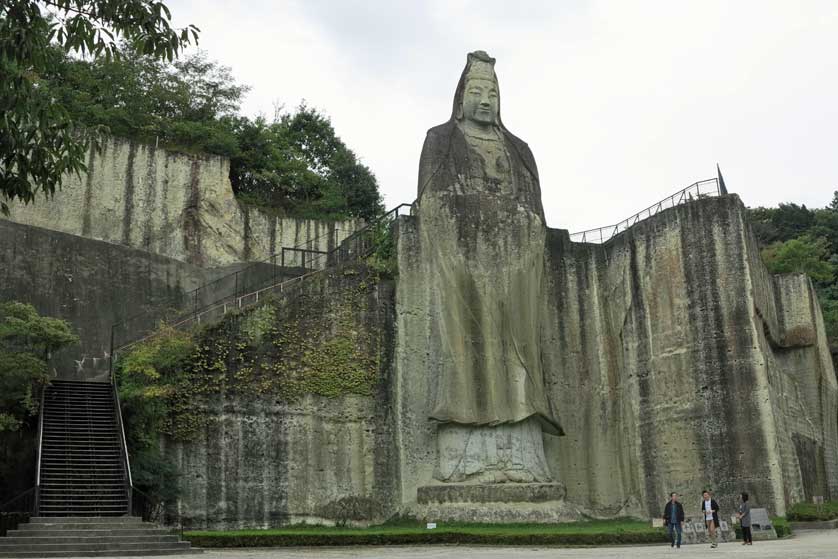 The quirky Oyaji Temple Treasure House just as you exit the temple contains archaeological finds discovered during restoration work at the temple.

These include pottery and flint shards displayed in glass cases and the skeleton a young male dating from the Jomon Period (seen below).

Also on display are wooden statues and photographs explaining the work carried out to restore the temple.

Close to the car park in Oya Park is one of several trendy cafes built in Oya stone that have become a feature of the area in recent years. The Standard Bakers has excellent bread and pastries with outdoor tables to enjoy the food and coffee. it serves breakfast, lunch, and dinner. 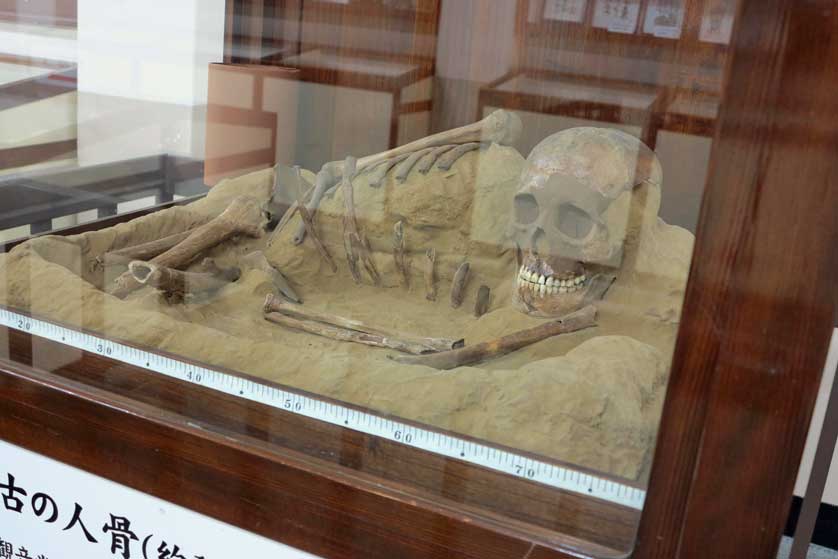 Regular Kanto buses from Utsunomiya Station run out to Oya. The journey takes about 30 minutes. Get off at the Oya Kannon-mae (大谷観音前) bus stop.

By car exit the Tohoku Expressway at the Utsunomiya IC.

Oyaji Temple in Oya near Utsunomiya is a cave temple with Japan's oldest relief statues which are believed to date from the early Heian Period.

$40 per person
Discover all our activities in Nikko (142)

In the shadow of the brilliant Toshogu shrine lies Taiyuin temple, mausoleum of shogun Iemitsu. A discreet temple hiding architectural treasures that have nothing to envy of its grandfather.

Futarasan is not the most impressive shrine in Nikko, but is the source of its religious importance. Futarasan, a place where the religions of Japan meet ...