Tori no Ichi means "Rooster Market," and is a market-cum-festival held every November on the two or three Days of the Rooster that happen that month according to the old Chinese-based zodiac calendar (jikkan junishi 十干十二支). This year-end festival also known as oh-tori-no-machi and otori-sama takes place at about 30 shrines named "Otori," primarily in the Tokyo region. 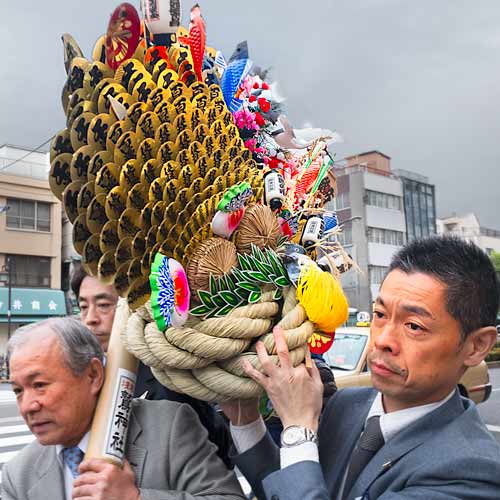 Tokyo's most famous Tori-no-Ichi is at Ohtori Shrine in the Senzoku district just north of Asakusa, and the adjacent Chokokuji Temple, which is historically the "mother" of the shrine. The blessing thus received from both the Buddha and the kami (native Japanese gods) is said to further cement the popularity of the Asakusa Tori-no-Ichi.

The Tori-no-Ichi originated in the mid-18th century as a thanksgiving ritual for farmers who would present a chicken to the shrine, and also as a market for merchants and farmers to sell their goods and produce and thus pay off their annual debts. Before long it became a festival for merchants praying for business success for the next year.

The purchases made here were the first in preparing for the New Year celebrations, making the Tori-no-Ichi an event symbolically linking the past year with the next. 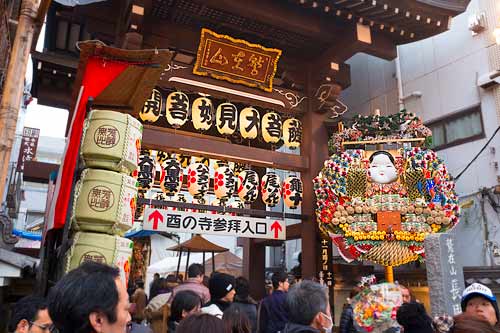 Tori no Ichi day at Otori Shrine near Asakusa, Tokyo 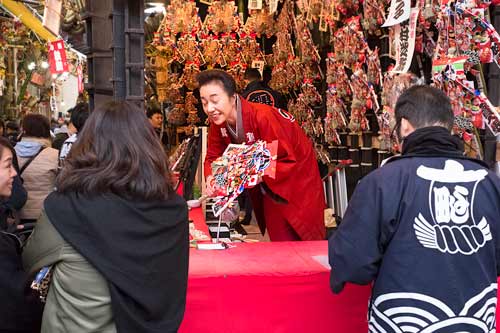 The Tori no Ichi's most distinctive feature is the kumade ("bear's paw") rake: an elaborate, flamboyant lucky charm comprising a wooden rake (for bringing in good luck, especially in business) which is amply decorated with rice straw rope and all manner of miniature amulets and figurines (including a bird) in festive colors, among which is a plaque bearing the purchaser's name. The tradition is to start small, bring back last year's kumade to the shrine and upgrade to a slightly bigger one.

At the Otori Shrine in Senzoku, Tokyo - just north of Asakusa - thousands of people line up to first pay their respects to the shrine deity. Otori shrines venerate the spirit of Yamato Takeru, the legendary 12th emperor of Japan, who, upon victory in war, gave thanks at an Ohtori Shrine on the first Day of the Rooster, and whose soul upon death transformed into a great white bird. Many visitors bear the kumade they bought the year before.

Once they have bowed and rung the shrine bell, they meander through the approximately 150 stalls selling kumade. Many drop off last year's kumade at a designated location, adding to the massive pile. Sellers try to attract customers with glasses of free sake. When buyers settle on a new kumade, they and the stall owner engage in the tejime (手締め) handclapping ritual used throughout Japan for concluding a celebratory event. 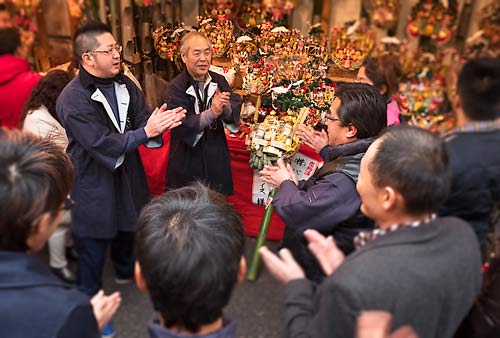 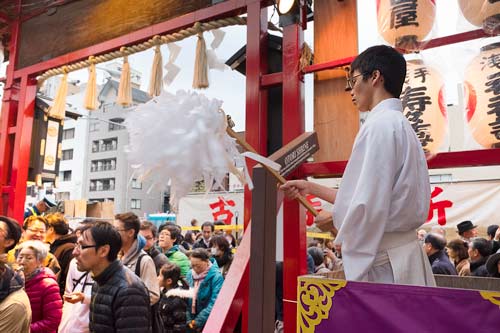 The Tori-no-Ichi at Ohtori Shrine near Asakusa is an all-day affair, running from midnight to midnight, on the two, sometimes three, Days of the Rooster that fall at twelve-day intervals throughout November.

The streets in the neighborhood around the shrine are lined with hundreds of snack and trinket stores catering to the approximately three quarters of a million people who visit each year. Typical foods sold here are yatsugashira potatoes (said to promote fertility) and kogane mochi (millet rice cakes).

Other Tori no Ichi

There are numerous other Tori no Ichi thoughout Tokyo, but, after that at the Ohtori Shrine (鳳神社) near Asakusa, the two most popular are at the Hanazono Shrine (花園神社) in Shinjuku, and the Ohtori Jinja (大鷲神社) that is on the grounds of Ohkunitama Shrine (大國魂神社) in Fuchu. Ohtori Shrine (大鷲神社) in the Hanahata district of Adachi ward, Tokyo, is where the Tori no Ichi festival had its roots, but today its Tori no Ichi does not draw such big crowds.

Outside of Tokyo, the major Tori no Ichi is held at Japan's leading Ohtori shrine, the Ohtori Taisha (大鳥大社) shrine in Sakai City, Osaka. 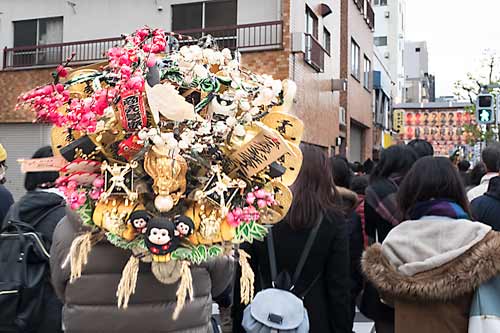 Tori no Ichi kumade on the way to Otori Shrine, Tokyo

The Yoshiwara traditional red light district is just east of the Senzoku district where Ohtori Shrine is. The Toyoko Inn Tokyo Asakusa Senzoku Tsukuba Express is a clean, modern, reasonably priced hotel just a few minutes walk away. The Asakusa Hotel Wasou, also very nearby, and closer to Asakusa, offers more budget accommodation: either a tatami-room or a super-budget capsule option. The beautiful Sadachiyo ryokan offers full Japanese hospitality in a picture-perfect traditional Japanese atmosphere for a classic stay.

The Tori no Ichi is a year-end festival for fortune in the next year held in November at shrines mainly in Tokyo and features a gorgeously decorated good luck charm called a kumade.