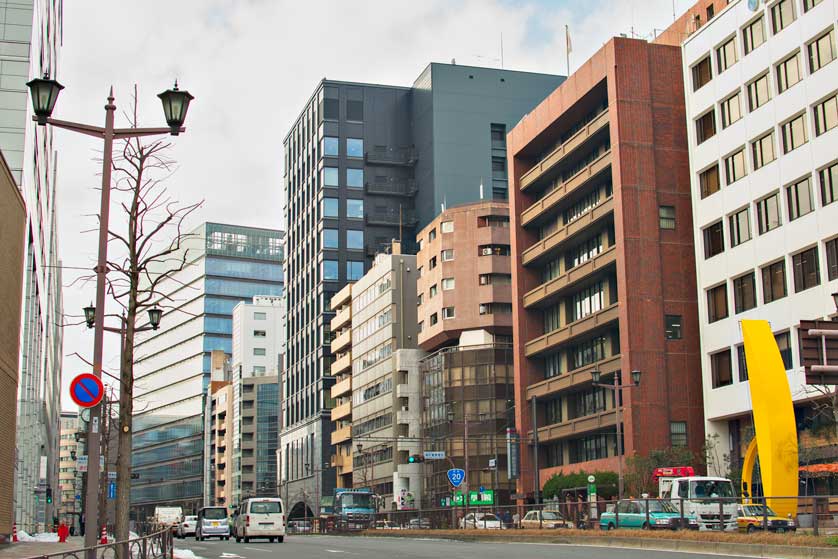 Visitors sightseeing in the area are most likely to pass through Kojimachi if deciding to walk along Shinjuku-dori Avenue from the Imperial Palace to Yotsuya Station and then turn left down Sotobori-dori Avenue to the Geihinkan Akasaka State Guesthouse in the Akasaka district. However, going just south of Kojimachi, through Hayabusacho and Kioicho is the recommended, more scenic, route in this case.

Kojimachi being largely a business district, the following tourist guide focuses as much on the areas adjacent to Kojimachi. 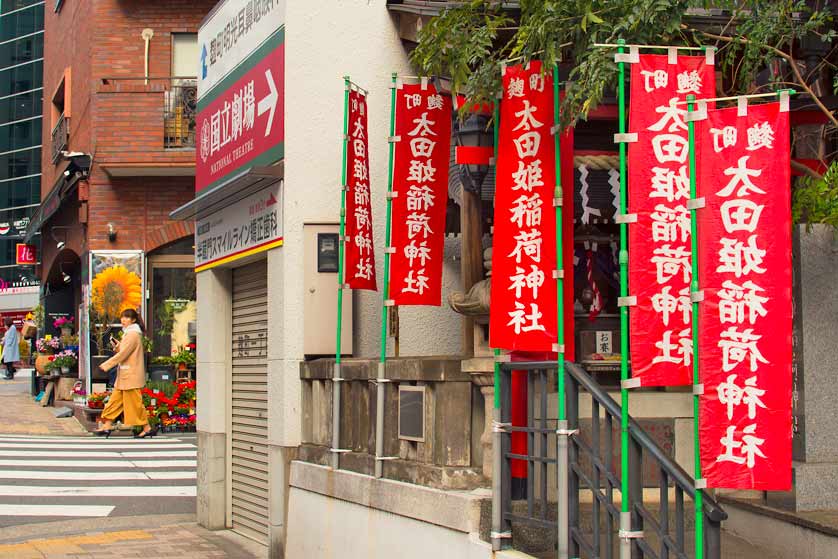 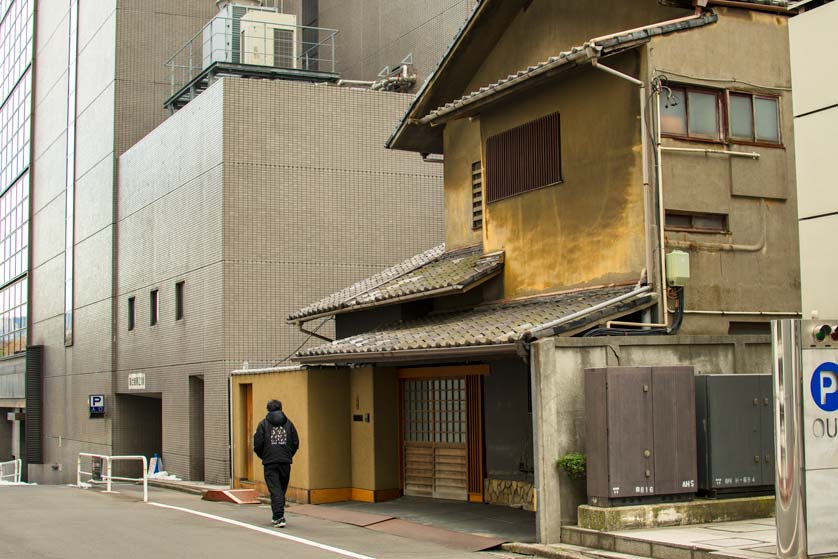 Shinjuku-dori Avenue runs through Kojimachi and was part of the main road from Edo (now called Tokyo) to Kofu. In the Edo era of Japanese history, Kojimachi was the quarter of the hatamoto, the "upper retainers" of the Shogun, and the area was lively with businesses serving their daily needs. The area lost its prominence with the defeat of the Shogun in 1868 by Imperial forces. Kojimachi did not really revive until a century later when the widening of Shinjuku-dori brought offices to the area in the 1970s. The proliferation of office buildings radically decreased the population, but turned daytime Kojimachi into a business district.

Today's Kojimachi has nothing happening after dark, but is full of cafes and restaurants, dotted among office buildings, serving mainly cheap lunches and early evening dinners to the office workers of the mainly small-to-medium businesses around.

Kojimachi has the St. Ignatius Church, a Catholic church right next to, and affiliated with, the Jesuit-run Sophia University ("Jochi" University, in Japanese), whose Yotsuya Campus is in the adjoining Kioicho district. The church and university are only a minute's walk from Yotsuya Station.

The Embassy of South Africa is in Kojimachi, a short walk from Exit 3A of Hanzomon Station. 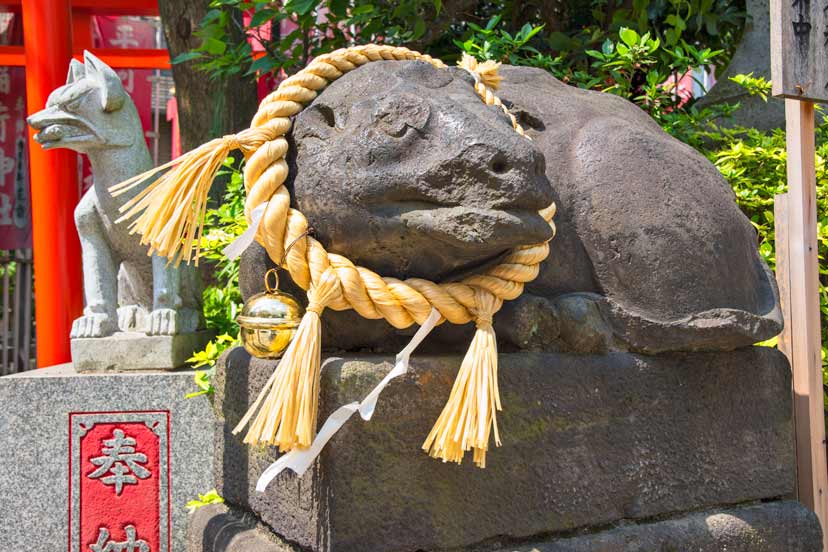 Josai International University has its Kioicho Campus just south of Kojimachi. The Kioicho campus has two locations, nearby each other: one in the Kioicho district, just 150 meters south of Exit 1 of Kojimachi Station, and the other in the Hirakawacho district, just 200 meters east of the main campus. The Hirakawacho location is home to the small Oishi Fossils Gallery of the Mizuta Memorial Museum, for visitors with a paleontological interest.

The British Embassy is in nearby Sanban-cho, a short walk from Exit 4 of Hanzomon Station.

Hirakawa Tenmangu Shrine is a small Shinto shrine near Exit 1 of Hanzomon Station that features stone nadeushi, or stone cows that one strokes for good luck. It is a shrine that is especially popular with people seeking examination success.

Chidorigafuchi Park, at the far end of Kojimachi, beside the Hanzo Moat of the Imperial Palace, is a small, tranquil park lined with cherry blossom trees, so attracts crowds only during the two weeks when the sakura blooms.

The JCII Camera Museum is in nearby Ichibancho, a minute's walk from Exit 4 of Hanzomon Station.

The Hanzomon Museum, also in Ichibancho, with a small but superb collection of Buddhist art including pieces of Gandharan art from what is now present-day Pakistan and Afghanistan is above Exit 4 of Hanzomon Station.

Kojimachi and its adjoining districts are conveniently close to the Imperial Palace a little east, and the center of Japanese political life, the National Diet Building, in nearby Nagatacho. The lively commercial and dining area of Akasaka is only a 10-minute walk away. The following three hotels are recommended in order of affordability.

The Toshi Center Hotel is only a walk away from the political district of Nagatacho and the nearby commercial district of Yotsuya. This high-rise hotel, which starts on the 14th floor, offers economical accommodation in the heart of Tokyo, and a choice of traditional Japanese (with futon) or standard Western-style (with bed) room. As part of the Rihga Royal chain, this hotel offers all the standard amenities and conveniences for the business - and even the tourist - traveler, and has two restaurants on the premises. 24-hour free baggage storage available for your convenience. Couple-friendly.

The Hotel Grand Arc Hanzomon is a mid-to-upper range hotel a short walk from Hanzomon Station. With a view over the Imperial Palace moat and grounds, this hotel is very centrally located to central Tokyo tourist highlights, and its boutique service adds a sheen of luxury to your Tokyo stay. Three restaurants, a lounge, a gorgeous lobby, and reasonable room rates.

The Hotel New Otani Tokyo the Main is at the western end of Kojimachi in the nearby Kioicho district, and offers luxurious accommodation in modern recently renovated premises, but with the classic touch that the New Otani is renowned for. Free parking, a fitness center, a pool, a beautifully landscaped property featuring a four-century-old Japanese garden, and no less than 32 dining options, including the revolving Sky Restaurant. Memorable accommodation in picturesque environs, only a short walk away from the bustling, modern Akasaka area. For the ultimate in New Ohtani hospitality, consider the adjoining, exclusive Hotel New Otani Executive House Zen. 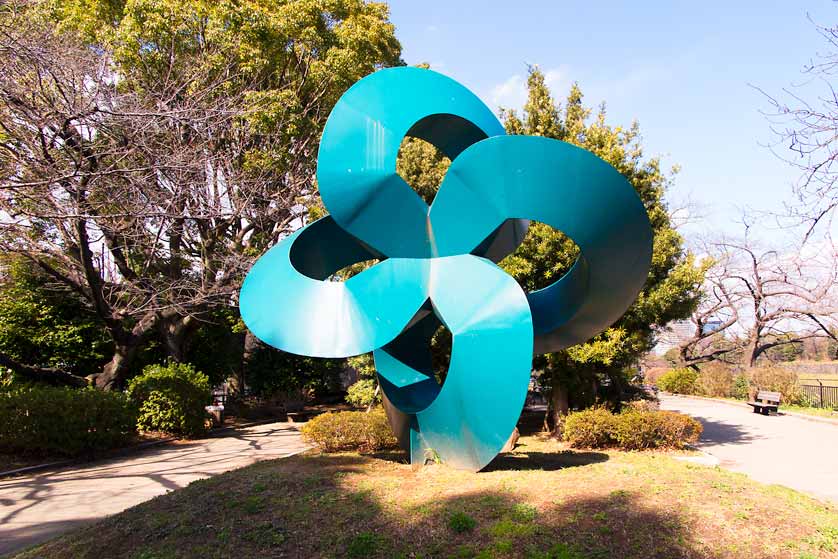 Kojimachi is accessible from three railway stations:
Yotsuya Station at the western end of Kojimachi is on the JR Chuo-Sobu Line, and Chuo line express trains stop here, the next express stop being Shinjuku Station. Two subway lines serve Yotsuya Station: the Marunouchi Line and the Namboku Line.

Hanzomon Station, served by the Hanzomon subway line, is named after the nearby gate of the Imperial Palace. It is at the far eastern end of Kojimachi, another 5 minutes walk on from Kojimachi Station. Exits 1 - 3 of Hanzomon Station are in Kojimachi, while exits 4 and 5 are in the adjoining Ichibancho district a little further north.

Kojimachi is a business area, flanked by some areas of interest, that lies other side of the approximately 1.4 km stretch of Shinjuku-dori Avenue that runs westwards from the Hanzomon Gate of the Imperial Palace, Tokyo.