Founded in the 12th century, Isshin-ji Temple has a lot of history, though rebuilt following the destruction of Osaka during the closing years of World War II, like most other temples and shrines in the city.

However, you will almost certainly be surprised as you approach Isshin-ji as its entrance is completely unique and modern, not appearing at all like any other gate at temples in Japan. 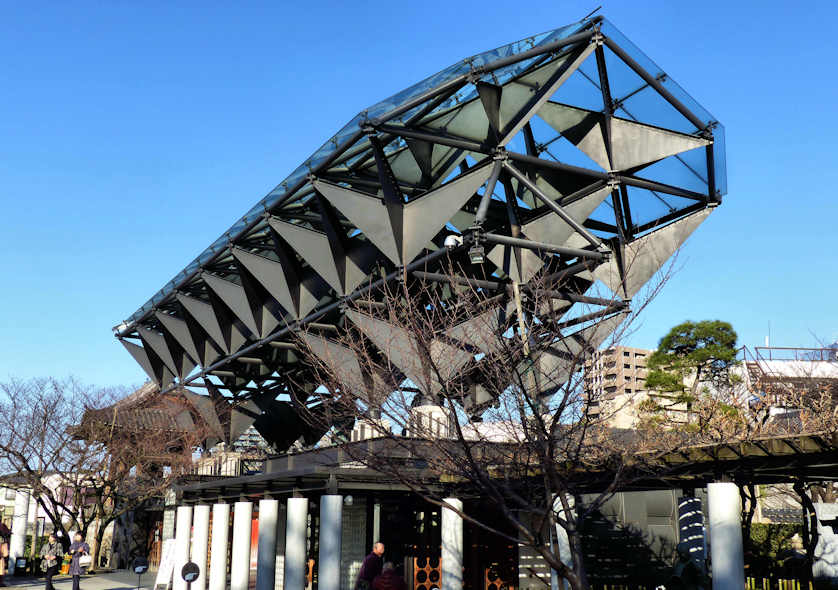 The unusual and unique main gate to Isshinji Temple in Osaka, designed by the current Head Priest 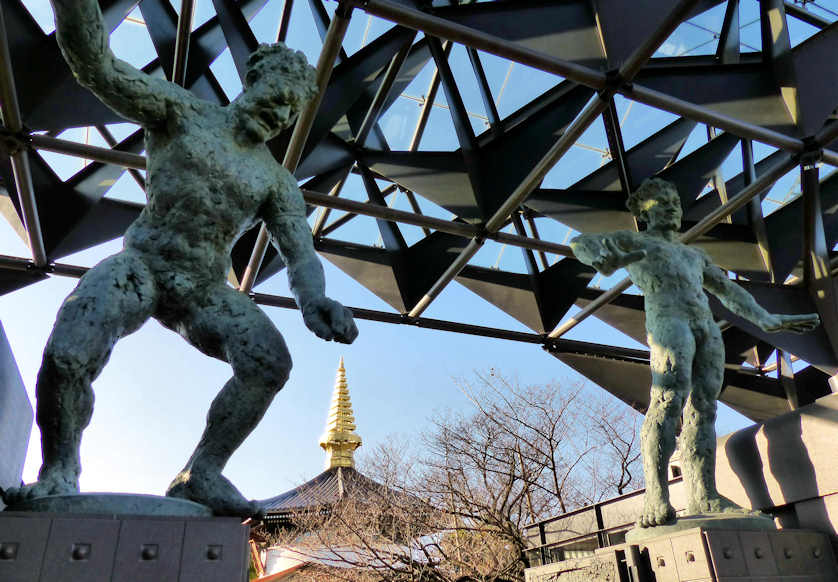 Constructed out of steel and concrete featuring what can only be described as a modern art sculpture, the gate gives no hint that a temple lies behind, and even the guardian Nio statues bear no resemblance to traditional ones.

The gate and other structures were designed by the current Head Priest who is also an architect. Inside the grounds it looks more like as you would expect a temple to look, though it is unusually crowded, though not with tourists but with worshipers. 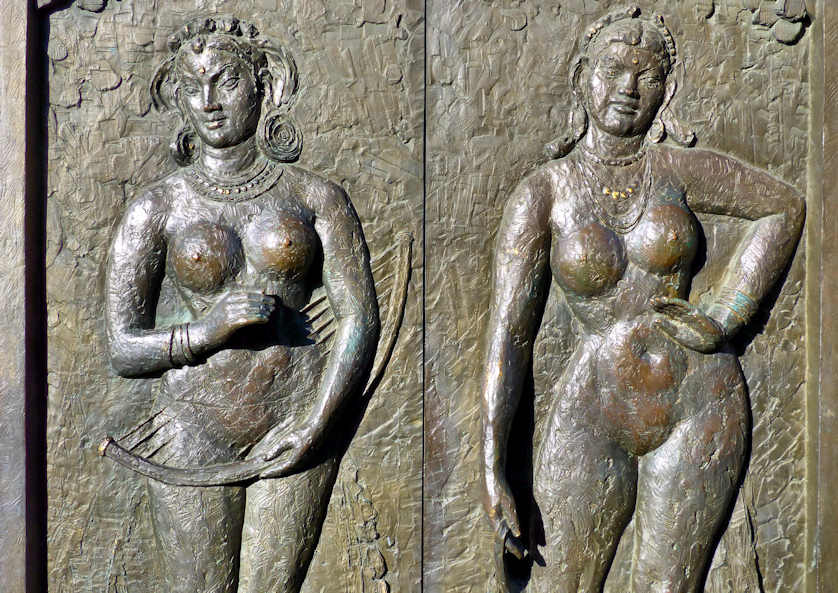 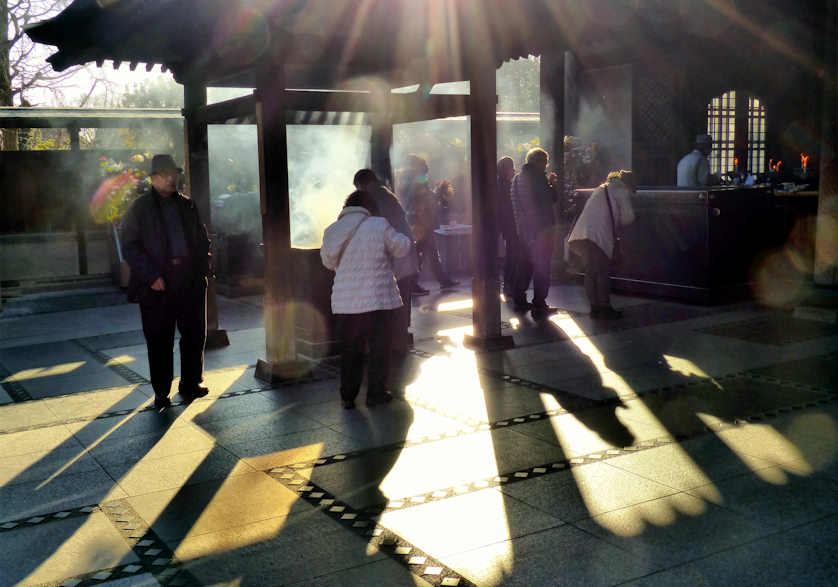 The grounds of Isshinji Temple are crowded with worshipers every day

Founded in 1185 by Honen, the founder of the Pure Land Sect, to which the temple still belongs, it is said that Retired Emperor Goshirakawa spent time here engaged in religious practices.

Isshinji's current site was given to the temple by Kodai-in (Nene), the wife of Toyotomi Hideyoshi. In 1614 Tokugawa Ieyasu made the temple his headquarters in his battle against Hideyoshi's son Hideyori, ensconced nearby in Osaka Castle.

The reason there are so many visitors here is not because of the history or because of the unusual architecture, but because Isshinji is home to the remains of millions of Osaka residents' ancestors, specifically something called Okutsu Butsu, which translates as "Bone Buddha".

The first known example of an Okutsu Butsu is a large statue of Jizo at a temple in Kanagawa which was manufactured in 1700 by a priest who combined crushed bones with clay to sculpt the statue.

By the late 19th century, Isshinji was running out of space to store the urns of ashes brought to the temple and came up with a modern version of Okutsu Butsu.

They combined the ash with a type of resin and the resulting mixture was cast as a statue of Amida. Six statues had been completed by the time of the latter stages of the World War II when the temple was totally destroyed by US aerial bombing.

Fragments of the first six were collected and with more ashes the seventh was completed in 1948. Since then a further six have been completed with each statue using the ashes of about 150,000 people, so with the ashes of more than a million ancestors making up the statues it is not surprising that so many people visit the temple nowadays.

Just across the street from the main temple is a kind of annex called the Sanzenbutsudo. From the outside with its plain concrete facade and glass doors it looks like some kind of business premises, in fact on maps it will be labeled as a theater, but when you step inside you are faced with a huge dome whose exterior is covered in golden statues.

Eventually there will be 3,000 of them, hence the name which means 3,000 Buddhas Hall. Venturing into the dome the interior is laid out like a church with rows of chairs facing an altar behind which the interior of the dome is painted in a large mural. This is claimed to be the largest tempera mural in the world. An experimental theater company sometimes performs here. 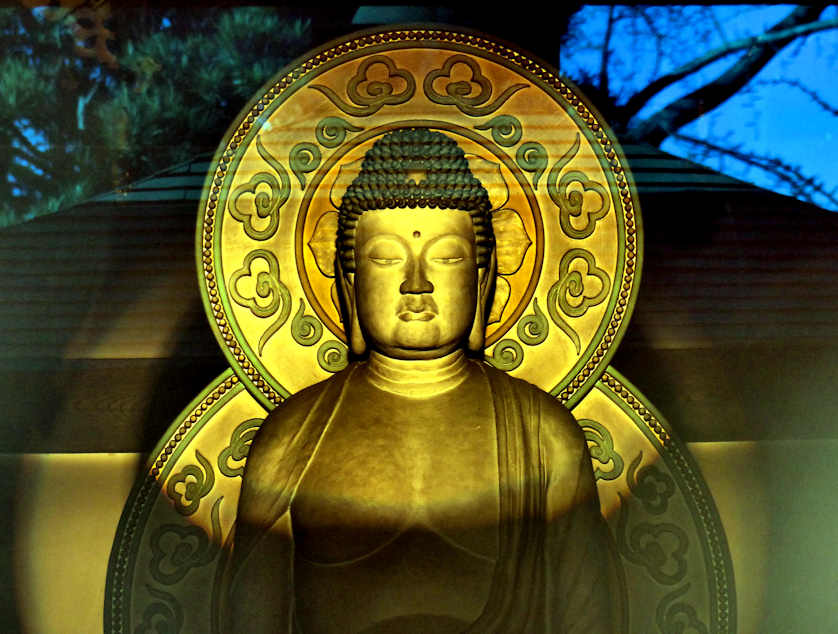 One of the Okutsu Butsu, Bone Buddhas, made from the cremated remains of about 150,000 people at Isshinji Temple 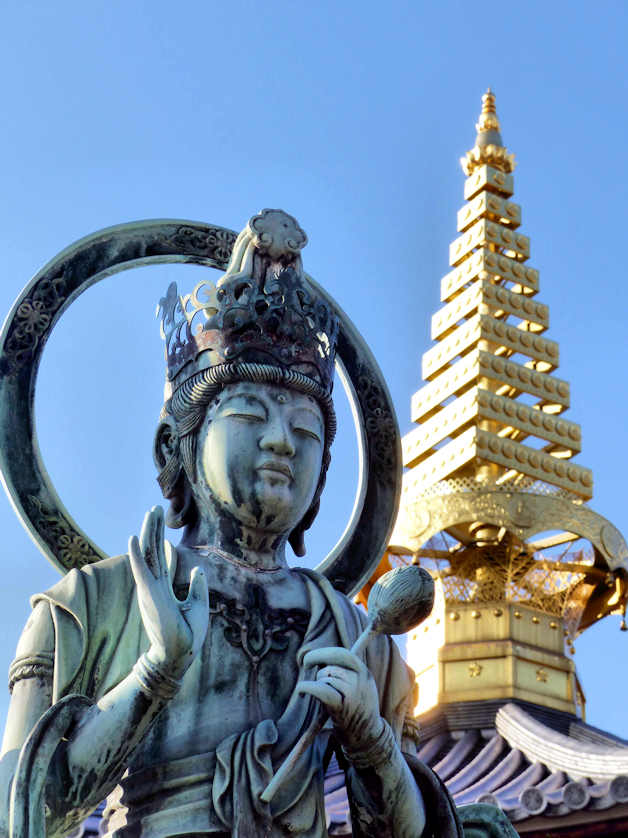 Hours: There is no entry fee into the temple. The Sanzenbutsudo is open from 9am to 4pm.

Access: Isshinji Temple is located directly north of Tennoji Park, and west of Tennoji Temple. Isshinji is about a ten minute walk from either Tennoji Station on the JR Loop Line, Midosuji Line or Tanimachi Line of the Osaka subway. Alternatively Isshinji is also about ten minutes on foot from Ebisucho subway station on the Sakaisuji Line.

Other places to visit in the vicinity of Isshinji Temple include Keitakuen Garden, Osaka City Museum of Fine Art, Tennoji Park, Tennoji Zoo, Abeno Harukus, Shinsekai and the Tsutenkaku Tower and Shitennoji Temple. 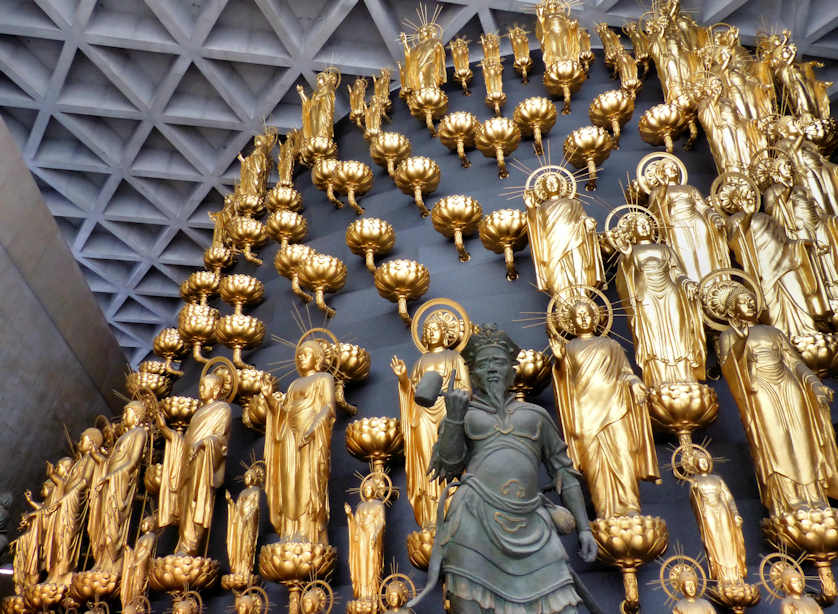 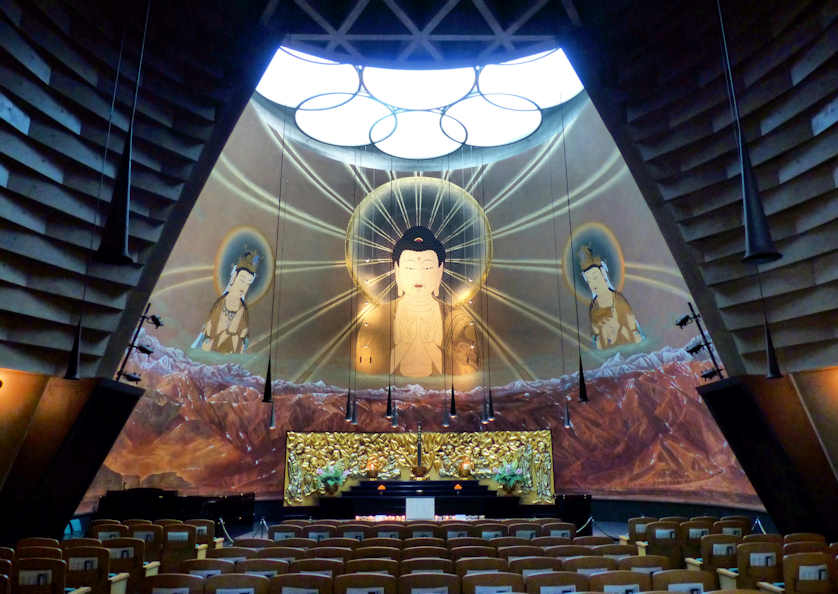 Isshinji Temple, 一心寺, in Tennoji, Osaka is remarkable for its modern architecture. Isshinji is home to the remains of millions of Osaka residents' ancestors, specifically something called Okutsu Butsu, which translates as Bone Buddha.

Sumiyoshi Taisha, in southern Osaka, is claimed to be one of the oldest shrines in Japan.

In the Kita district of Osaka, discover the astonishing Dojima Yakushido with its super-contemporary design, a temple founded 1,400 years ago!

The Awashima Jinja Shrine houses a collection of several thousand dolls believed to bring good luck to those who come to deposit them there.