Chidorigafuchi Park is a small but well-located and historical park in Chiyoda ward, Tokyo, overlooking the Hanzo Moat on the western edge of the Imperial Palace Tokyo. 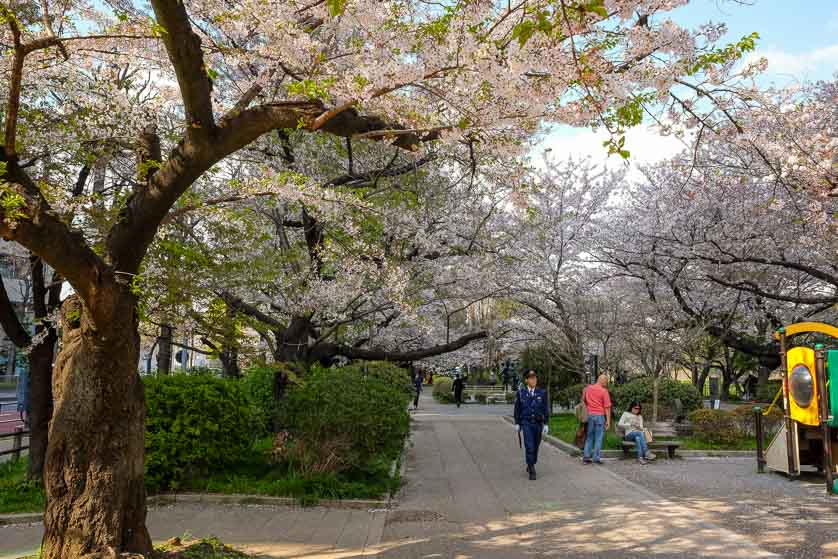 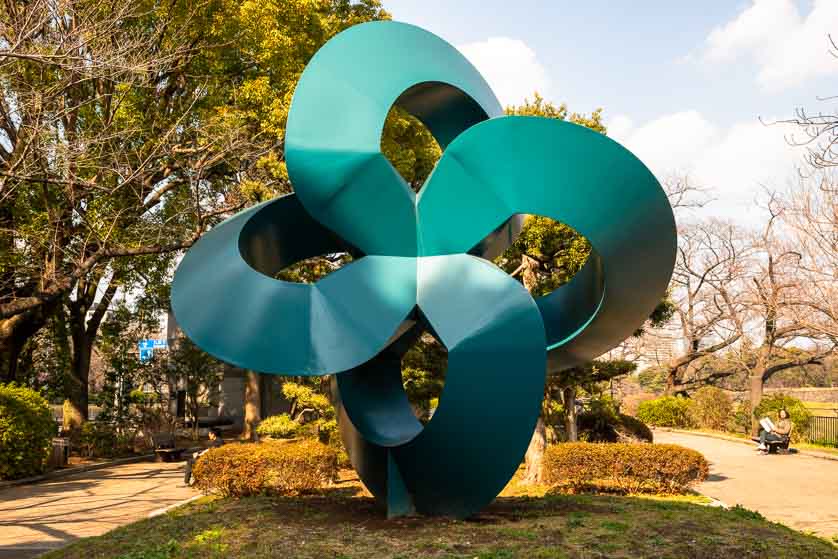 The park forms a strip about 450 meters long and only about 20 meters wide from the Hanzomon Gate of the Imperial Palace to Chidorigafuchi Intersection, which is about a three-minute walk from the Chidorigafuchi National Cemetery. The British Embassy is on the other side of the road from the park. 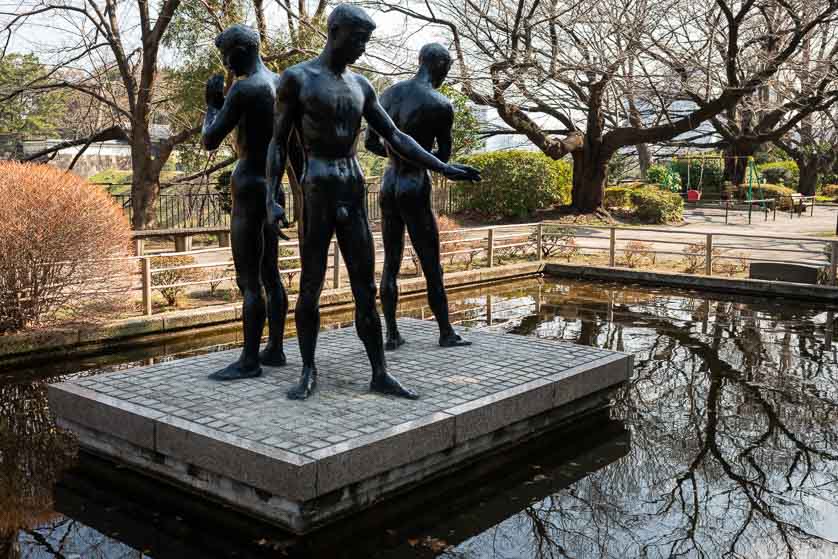 Pond with statues in Chidorigafuchi Park

The first of Chidorigafuchi Park's famous sakura trees were planted in 1881 by the British diplomat, Earnest Satow, the area being right in front of the embassy. More were planted by the city of Tokyo in 1898 to create rows of them. 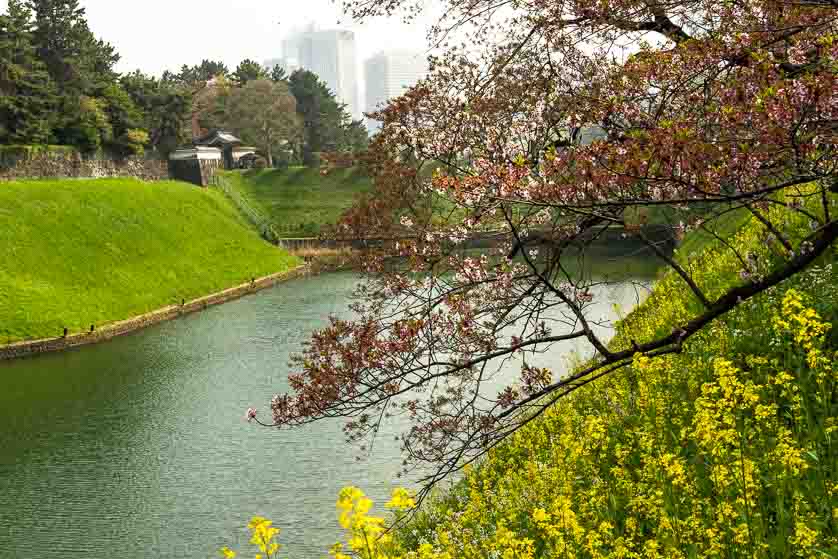 Chidorigafuchi became public park in 1919. Destruction in World War Two meant that many of the sakura trees were replanted after the war.

According to a monument in the park, Chidorigafuchi Park was the site of Tokyo Daiichi Junior High School, established here in 1924—a school that has now become Kudan Secondary School, located in the nearby Kudankita district, about a kilometer north. 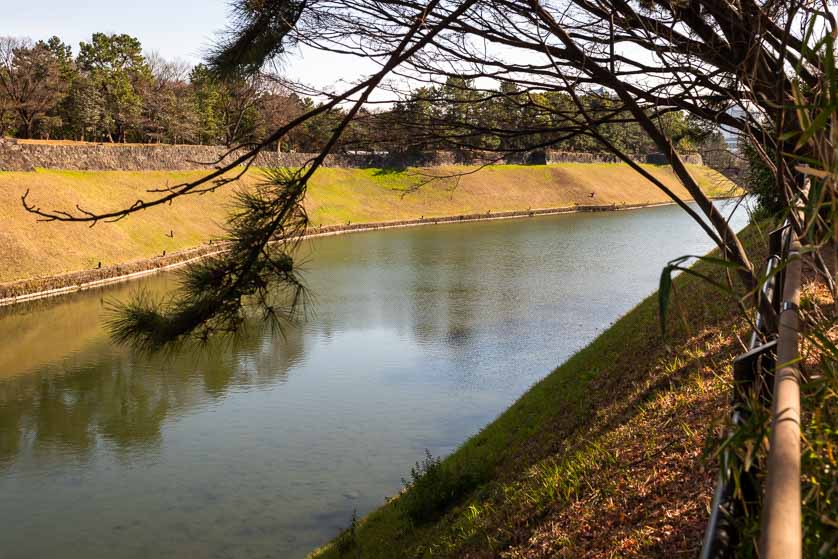 View of Hanzo Moat of the Imperial Palace, Tokyo, from Chidorigafuchi Park

Chidorigafuchi Park's main feature is its scores of sakura cherry trees, which blossom in spring, drawing large numbers of picnickers for hanami blossom viewing parties. The blossom-laden trees overhanging the moat make for an especially beautiful springtime foreground. However, during the rest of the year, there are relatively few visitors: office workers from the Kojimachi business district taking a lunch break on one of the several benches throughout the park, pupils of nearby schools using it as a base for runs around the Imperial Palace, and other joggers taking the route through the park rather than the narrow pedestrian path that runs alongside it. 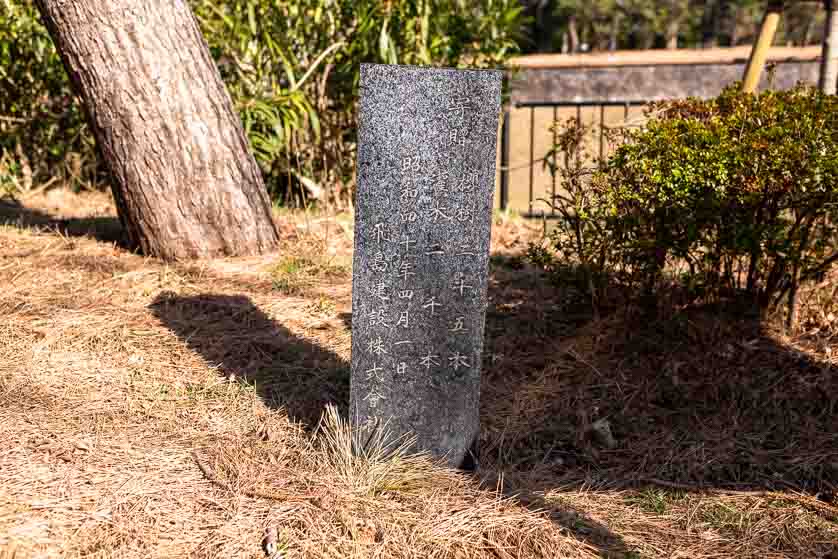 Plaque commemorating gift of 25 cherry trees by a local company in 1965 to Chidorigafuchi Park.

Outside of hanami season, the best reason to visit Chidorigafuchi park is for its elevated vantage point over the Hanzo Moat. This, the western side of the Imperial Palace is about 15 meters higher than the eastern (Hibiya/Marunouchi) side. Lookout points along the moat edge of the park, including a dedicated lookout platform, provide sweeping views of the moat and the edge of the inner palace grounds. 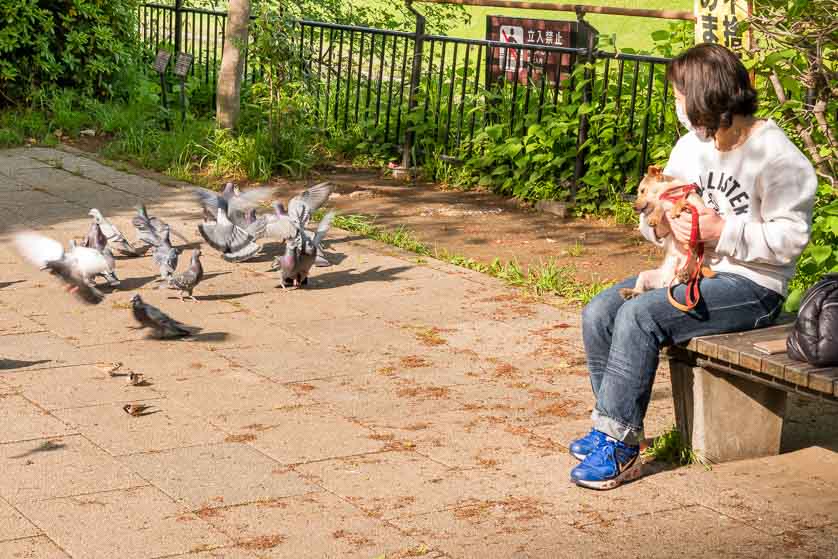 In the middle of the park is a not particularly attractive pond with classical-type statues at its center. A little further along is a large (4.2 meter high), striking modern sculpture by the Mexican artist, Taller Sebastián, celebrating the 100th anniversary in 1997 of the start of immigration between Japan and Mexico.

Chidorigafuchi Park has a children's play area, with slides and swings, at its Hanzomon end.

The park also has a public toilet, used mainly by joggers and taxi drivers.

Besides the Imperial Palace, Chidorigafuchi Park is very near (and, actually, officially part of) the business district of Kojimachi, meaning there are a lot of cafes and restaurants nearby.

The JCII Camera Museum is just behind the British Embassy.

The Hanzomon Museum is a free museum with a superb collection of Buddhist art, located right next to Hanzomon Station.

The National Theater is seven minutes walk away, with the monolithic Supreme Court (for architecture buffs and, in spring, for the blossom) right next to the theater.

From the northern end of the park, the Chidorigafuchi National Cemetery is just three minutes walk away.

Somewhat further on is Yasukuni Shrine, about a 13-minute walk. 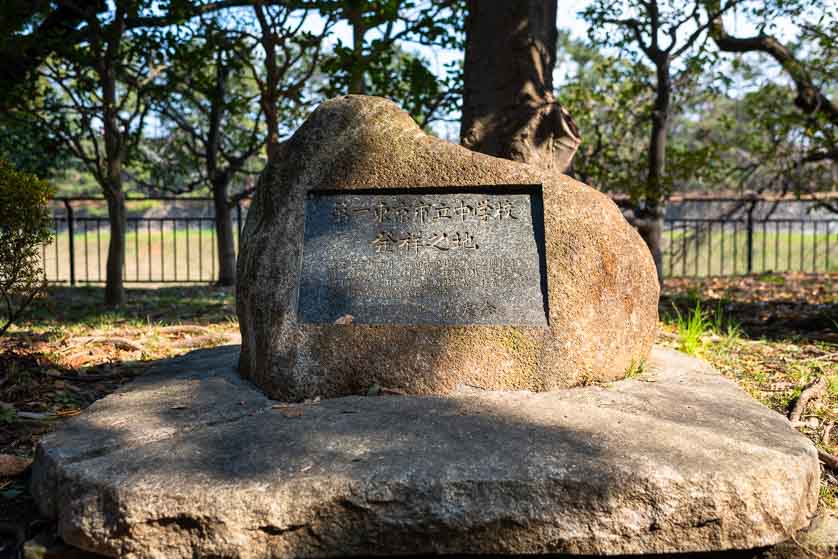 Monument to where one of Tokyo's first middle schools was established in what is now Chidorigafuchi Park.

The following three hotels in the general area of Chidorigafuchi Park are recommended in order of affordability.

The Toshi Center Hotel is only a walk away from the political district of Nagatacho and the nearby commercial district of Yotsuya. This high-rise hotel, which starts on the 14th floor, offers economical accommodation in the heart of Tokyo, and a choice of traditional Japanese (with futon) or standard Western-style (with bed) room. As part of the Rihga Royal chain, this hotel offers all the standard amenities and conveniences for the business - and even the tourist - traveler, and has two restaurants on the premises. 24-hour free baggage storage available for your convenience. Couple-friendly.

The Hotel Grand Arc Hanzomon is a mid-to-upper range hotel a short walk from Hanzomon Station. With a view over the Imperial Palace moat and grounds, this hotel is very centrally located to central Tokyo tourist highlights, and its boutique service adds a sheen of luxury to your Tokyo stay. Three restaurants, a lounge, a gorgeous lobby, and reasonable room rates.

The Hotel New Otani Tokyo the Main is at the western end of Kojimachi in the nearby Kioicho district, and offers luxurious accommodation in modern recently renovated premises, but with the classic touch that the New Otani is renowned for. Free parking, a fitness center, a pool, a beautifully landscaped property featuring a four-century-old Japanese garden, and no less than 32 dining options, including the revolving Sky Restaurant. Memorable accommodation in picturesque environs, only a short walk away from the bustling, modern Akasaka area. For the ultimate in New Ohtani hospitality, consider the adjoining, exclusive Hotel New Otani Executive House Zen. 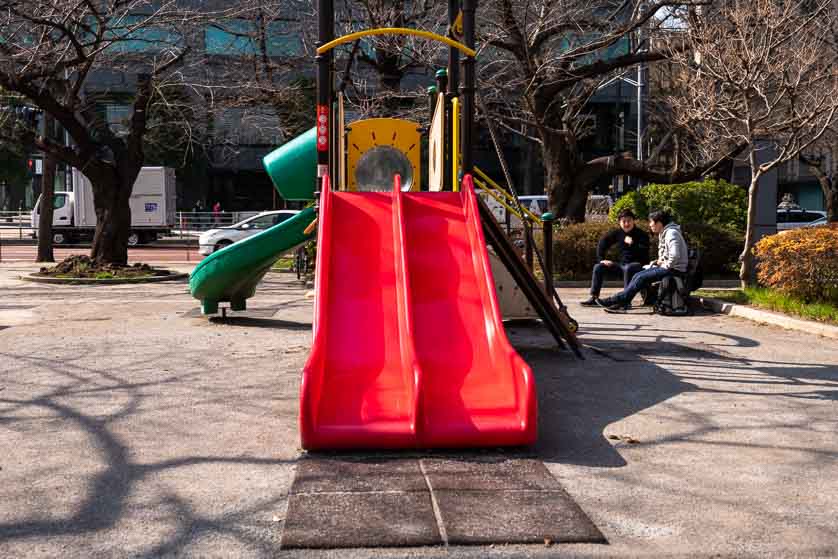 Chidorigafuchi Park in Chiyoda ward, Tokyo, is a small but historically significant park on elevated ground just east of the Imperial Palace, and a famous cherry blossom spot in spring.