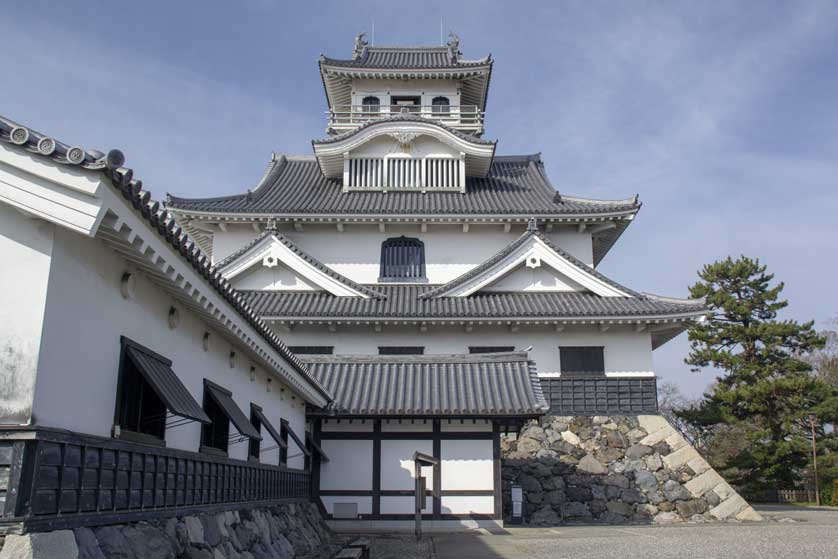 Toward the end of the sixteenth century a promising military general named Toyotomi Hideyoshi chose the northeast shore of Japan's largest lake (Lake Biwa) as the site for his first castle.

To honor his lord, Oda Nobunaga, he named the place, Nagahama. Since then the city has been through changes that have left behind heartwarming traditions and dazzling festivals, captivating temples, and museums that inspire anything from historical insight to futuristic fantasy.

A replica of Nagahama Castle now provides both a historical and a scenic overview of the city.

Nagahama Castle is a museum, and the exhibits begin with archeological finds from Japan's oldest civilization, the Jomon people.

Scrolls bearing Buddhist images allow a comparison of the different styles that were current during the area's development. Scaled models show how the original castle was built.

Extensive exhibits of flintlock rifles manifest Nagahama's ongoing relationship with Tanegashima - the island where ballistic technology was introduced to Japan. Small models of the enormous floats called hikyama are a hint at the city's cultural history and its calendar of festivals.

The top floor is an observation deck where you will find Nagahama cradled at your feet between distant mountain peaks and the spread of Lake Biwa. Towards the south you can see the place where two ancient roads in Shiga Prefecture came to meet. 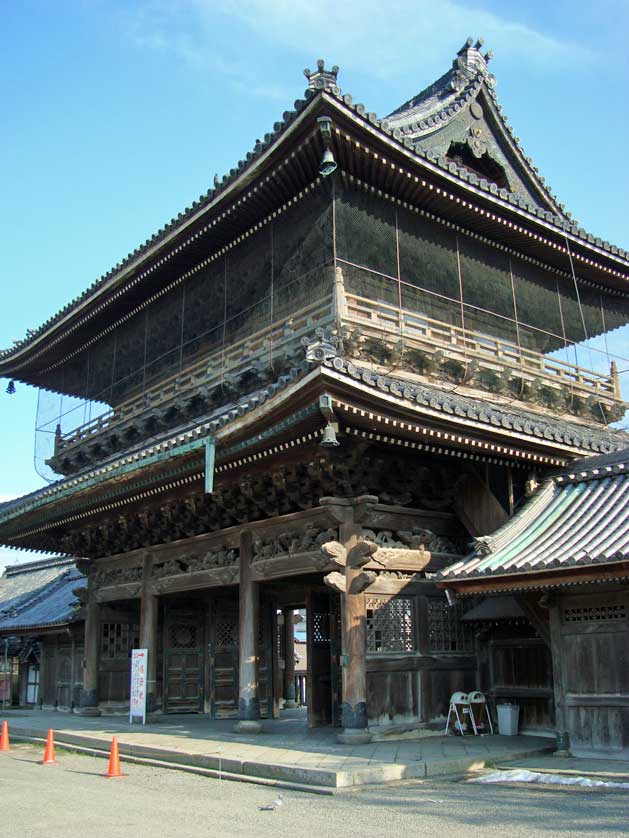 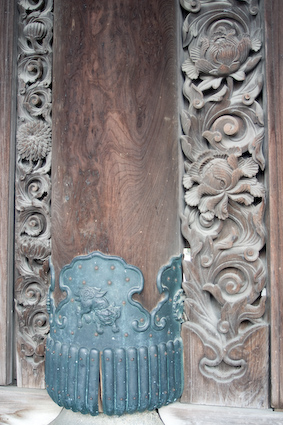 There is much of historical interest in Nagahama including ornate woodwork

From the seventeenth to the nineteenth centuries Nagahama was a "post town" where travelers on the government subsidized highway called Hokkoku Kaido could find lodging and supplies. The spot where that road intersected the highway joining the castle and the temple named Kegon-ji was the center of the city during that era. It has a lot to offer contemporary visitors as well.

In 1900 a bank, which incorporated both Western and Japanese architectural features, was built near the crossroads. Its plastered walls were painted black and it soon became known as the "Black Wall Bank".

In a period of more than eighty years the building went though several incarnations, including a Catholic church with a white exterior, until plans for its destruction became the impetus for the local population to preserve the area now called Black Wall (Kurokabe) Square. 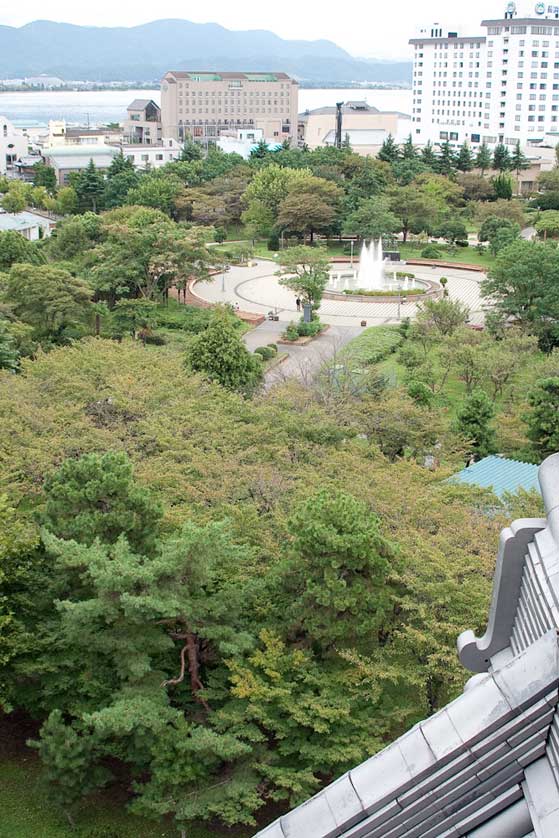 Now, dozens of enterprises there open doors hung on the architecture of earlier times to offer traditional and modern craft items. Within the, once-again black, walls of the bank, for example, you will now find sparkling wares of the artisan glass-making industry that was an integral part of the restoration effort.

Other traditional buildings have been converted into museums such as the Kurokabe Glass Kansho Kan. Originally a well to do merchant's home, it now exhibits works of art made in glass that range from the functional to the entirely aesthetic. The Museum for Local Arts and Crafts puts you literally in touch with ancient history with its "hands on corner" where you can try on headgear and tunics from olden times, or heft a flintlock rifle. 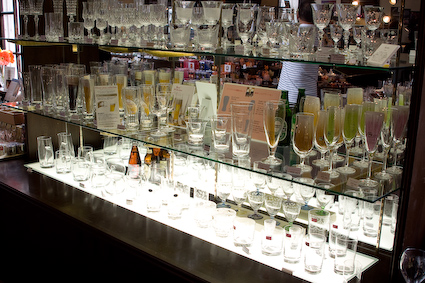 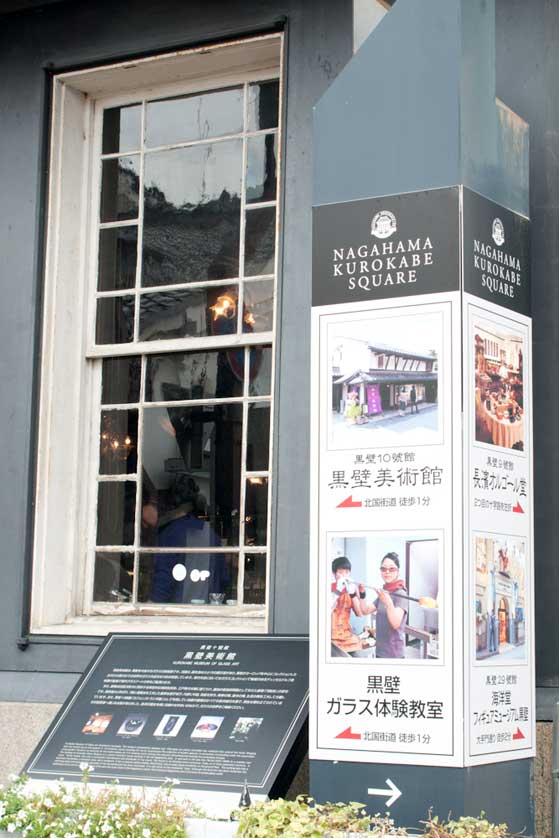 The Flintlock Museum is also in this area and Japan's oldest railway station still stands nearby. The latter is filled, now, with train memorabilia, functioning model railroads, and two genuine engines, one dating back to the coal-fired era. It will delight anyone who has yet to lose the fascination those machines can inspire. Another, not to be missed, attraction for the young at heart is the Figure Museum where ancient worlds, fantasies, and possibilities for the distant future are made real in the medium of molded plastic.

The centerpiece of this district is the Hikiyama Hakubutsukan, a museum devoted to Nagahama Festival and its huge hikiyama floats. Unlike most Japanese portable shrines, these incorporate performance stages on which children act out traditional kabuki plays. That spectacle is reserved for just a few days in mid-April, but the hikiyama are on display year round at the museum, surrounded by extensive exhibits detailing the origins and history of the very dramatic annual event.

This museum makes a good first stop where you can pick up a "passport" that includes a sightseeing map, marking the locations of popular tourist spots, and five coupons that allow you free admission to any of thirteen sites within the city.

The passport introduces a number of Nagahama's temples and shrines. The most notable is one that will, after a visit to the castle museum, bring you full circle in the city founder's life.

The temple, Daitsuji, is said to be comprised of parts of Toyotomi Hideyoshi's last castle. A grand palace laid out in Fushimi City, the castle was later broken up and used in the construction of other important sites in Japan. The art and architecture preserved in the temple are outstanding examples of the flamboyance and the subtlety of the Azuchi-Momoyama period.

The temple, Shana-in is an elegant foil for Daitsuji's grandeur. Tiny in comparison, but still incorporating the same architectural style, it is filled in autumn with delicate pink blossoms of cotton rosemallows. It is neighbor to Hachimangu Shrine, where the thespian festivities of April reach their climax.

Aside from her namesake celebration, Nagahama hosts a wide variety of festivals. The flintlocks find their voice when they are fired in the streets and the Great Kimono Garden Party is among the nation's most well attended kimono festivals. You can find a listing of festivals here.

No matter what may bring you to the city, her native foods can sustain you while you stay. Her most traditional dish was born of geography and family ties. Nearby coastal provinces supplied seafood while farmlands lie to the south.

Many daughters left Nagahama to marry into farming communities and yakisaba soba was created to save them some of the labor of cooking during harvest time. Mackerel (saba), cooked in a sweet sauce to preserve it, was sent to the farm brides who would reheat it in a broth along with somen noodles that absorb the liquids. It is a treat not to be missed and the most well known restaurant that serves it, Yoka Rou, is just a few steps south from the old bank.

A more recent take on Nagahama cuisine can be found at the Nagahama Roman (read Romantic) Brewery. Here you can sample a variety of microbrews, made on the spot, including Nagahama Ale that boats a gold medal from the the Japan Cup contest. The restaurant attached to the brewery offers anything from snacks to hearty meals to accompany the city's signature drafts. 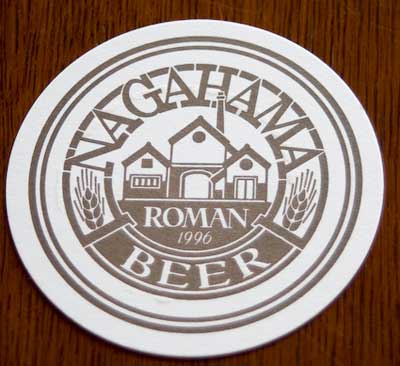 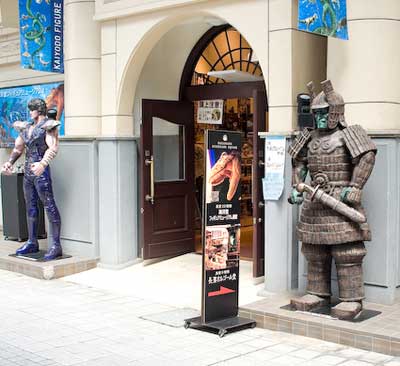 Green Hotel Yes Nagahama Minatokan is very conveniently located not too far from Nagahama Station and the castle, walking distance to Lake Biwa and, although not new, is clean, spacious and comfortable. Includes traditional not pool bathing facilities for guests.

Ryokan Beniayu is superbly located on the edge of Lake Biwa. One of this old established inn's biggest attractions is the balcony-style hot pool in which you can soak looking out over the lake. Staff speak English here and the food served is nothing less than exquisite. Get pampered! 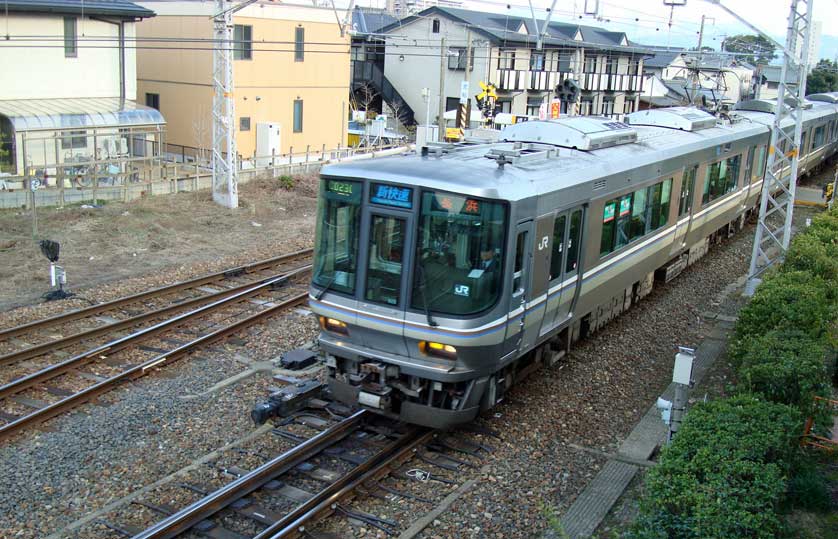 Nagahama is on the JR Biwako Line

Nagahama is on the JR Biwako Line (part of the Hokuriku Line) which runs from Maibara to Naoetsu in Nagano along the eastern side of Lake Biwa before running east along the Japan Sea coast. Stops include Tsuruga, Fukui, Kanazawa, and Toyama.

Nagahama is about 60 minutes from Kyoto (shinkaisoku) or 90 minutes from Nagoya by JR train via Maibara. Alternatively take a Hikari shinkansen train from either Nagoya, Kyoto or Osaka to Maibara and change for the shinkaisoku for Nagahama.

By car exit the Hokuriku Expressway at the Nagahama IC. Alternatively Route 1 and then Route 8 from Kyoto. 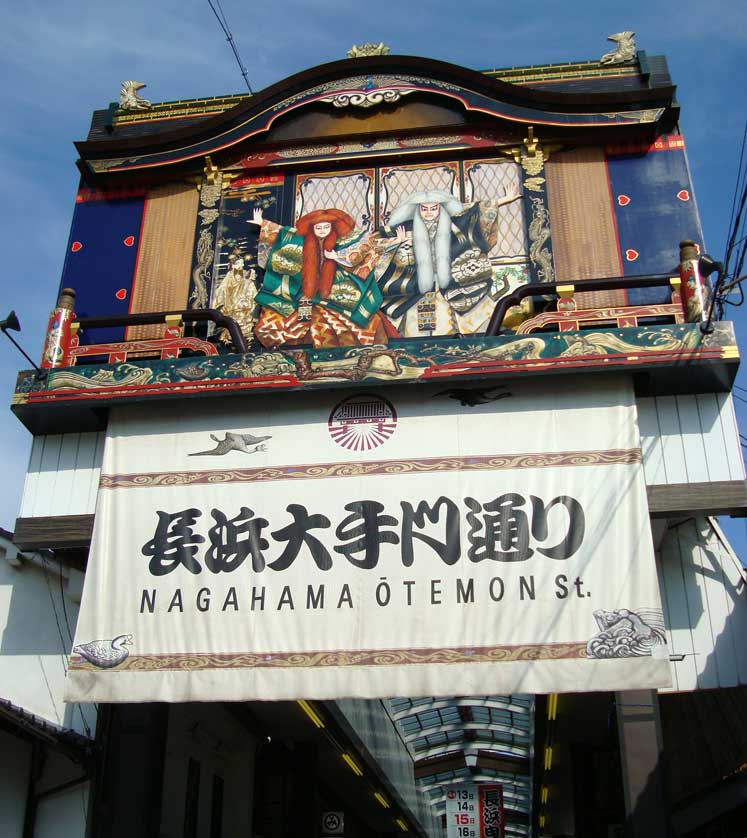 Nagahama: read a guide to Nagahama on Lake Biwa; Nagahama is an old castle town in Shiga Prefecture, western Japan.