On the coast of the Sea of Japan, two hours from Kyoto, the former refuge of storks can pride itself on having become one of the most beautiful onsen towns in Japan. Streets lined with shops where couples dressed in yukata stroll, a river lined with trees and spring water fountains, tranquillity everywhere.

Reach Kinosaki Onsen from Kyoto with a Japan Rail Pass.

The city of Kinosaki

Kinosaki is the very image of the Japanese onsen town. Located by the Sea of Japan, it has been a place of relaxation for centuries on the way from Kyoto. It is here that the onsen temple, the onsen-ji is located, where one would pray before taking the waters. Legend has it that this temple was dedicated to the monk who prayed to Buddha to raise the hot springs.

Kinosaki Onsen, a small town on the Tango Peninsula, about 150 kilometres north of Kyoto in Hyogo Prefecture, on the sea coast of Japan, is one of Japan's favorite spas. Unlike some onsen towns that have been modernized by the introduction of western-style hotels, Kinosaki is a cozy town, with a stream running through it lined with willow and cherry trees.

Onsen culture in Kinosaki dates back 1400 years, making it one of the oldest spas in Japan. The town's economy is almost entirely devoted to hot spring tourism and crab dishes from the Sea of Japan, which is a local speciality.

The resort of Kinosaki has many ryokan (Japanese-style inns) and public baths. The latter attract crowds mainly from Osaka and Kyoto, from where express trains frequently arrive. Kinosaki has seven main onsens with different healing properties. Locals and visitors, often staying in a local ryokan, don yukata and geta (traditional sandals) take strolls of onsen-meguri, i.e. walk from one onsen to another during the evening.

The streets of Kinosaki are lined with small local vendors selling beverages and food, such as onsen-tamago (eggs boiled in a hot spring) and crab, cooked in natural hot water, for those who wish to taste the local delicacy. 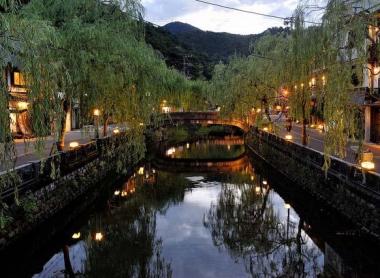 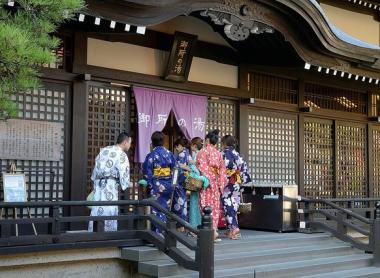 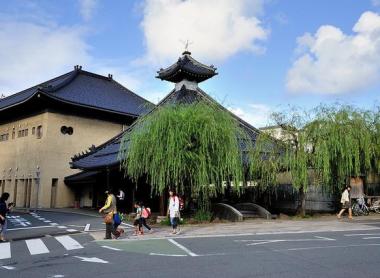 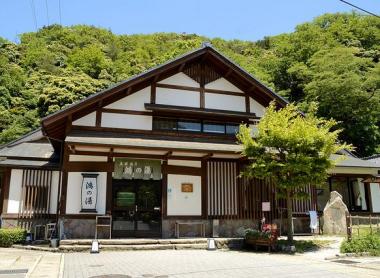 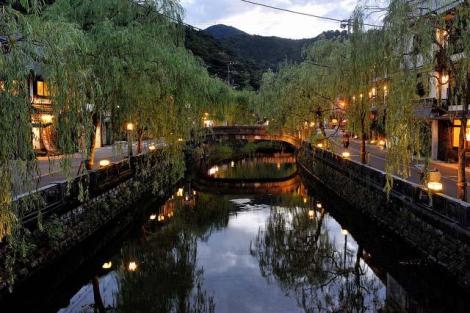 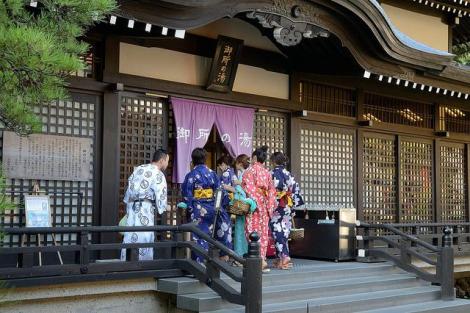 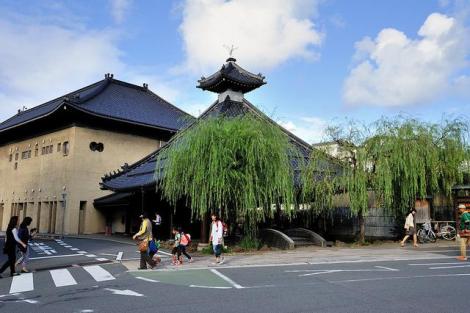 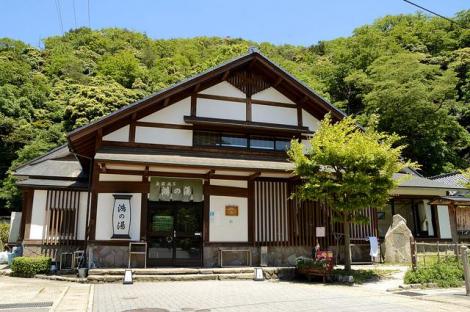 Every visitor to Kinosaki must make the journey to the seven onsens of Kinosaki, the soto-yu. These baths are among the most prestigious onsen in Japan and have existed for centuries. This is not to say that Kinosaki is living on its past; in 2000 the Sato-no-yu opened as a new jewel in the city's crown. The path to the seven onsens in Kinosaki can be started from the station via Sato-no-yu to Kono-yu by walking up the elegant streets along the Otani River.

The Japanese come to Kinosaki to enjoy the baths but also the many local ryokans and their cuisine. You can spot them strolling through the town in the yukata wear provided by the ryokans for onsen-meguri.

On the way, you can stop by at the local cafes and restaurants or simply admire the stunning scenery and its atmosphere. Staying overnight in Kinosaki allows you to indulge in its finest cuisines, including the local specialty, matsuba crab, proclaimed the "Kingdom of Crab".

Although people come to Kinosaki for the onsen, there are also other attractions worth a visit. Just outside the town, you will find the Onsen-ji temple, the path through the forest alone is worth an experience. The temple can also be reached by the Kinosaki cable car, conveniently located near the Kono-yu onsen. The path climbs 1,000 meters above sea level and offers a breathtaking view of the city, the surrounding countryside, and the Sea of Japan. It is also a common sight to witness  Kinosaki storks, the symbol of the city, protected in a local sanctuary, in the area.

What to do and see in Kinosaki?

Heading up the valley, down a small side street near the Mandarayu Onsen, you will find Gokurakuji Temple.

The land in front of the temple buildings is divided into two karesansui, or 'dry gardens', and the paths offer views from different angles. The temple offers the opportunity to try zazen, the sitting Zen meditation technique.

Further up the valley, you reach the hot spring. Here you will find a free footbath to sit and relax. According to legend, it was created when a temple was established on the hillside opposite the spring in the early 8th century. The main temple buildings are located halfway up the hill, but at the foot of the mountain is the Yakushi-do, the hall dedicated to the Medicine Buddha.

From here, steps lead up to the mountain to a complex of buildings that includes a pagoda and a temple treasure museum. In the main hall are various statues, some of which date from the Heian period.

Opposite the temple gate, is a lovely hillside garden with many statues and a water feature.

For over 1,200 years, visitors to Kinosaki had to walk up the hills to Onsenji Temple before visiting the spas, but today most people choose to take the cable car. A short 7 minutes ride to reach the top of the 230-metre-high Mount Daishi and stop at Onsenji Temple.

At the observation platform on the peak, awaits a magnificent view of the city and the surrounding countryside as far as the mouth of the Maruyama River and the coast of the Sea of Japan.

Just across from Kinosaki is the Hachigoro Toshima Swamp, home of the rare Oriental White Stork. You can get a great view from the observation building, where you will find many avid bird-watchers with binoculars for a close up of these magnificent creatures.

Further upstream is the Genbudo Caves, a fantastically shaped geological wonder formed by volcanic activity in the area. It is one of the sites of the San-in Coast UNESCO Global Geopark, in which Kinosaki is located.

The adjoining museum has many dinosaur exhibits for children. The caves are accessible by a small ferry from Genbudo Station on the opposite shore.

Before becoming a global geopark, the area around Kinosaki was made into a national park. If you head down to the sea, you will find yourself on the Hiroyama coast, with its white sandy beaches and towering cliffs.

Just off the shore, you will find a unique shrine, dedicated to the Dragon King believed to live at the bottom of the sea. On the shore, there's the Kinosaki Marine World, a large aquarium and marine center with attractions including swimming with dolphins.

A little further along the coast and accessible by a short train ride from Kinosaki Onsen is Takeno, a quiet fishing village that was once a historic port and known for its large white sandy beach, filled with visitors to soak up the sun or go snorkeling.

There are various hiking trails along the Nekozaki peninsula with panoramic views of the coast, or you can simply stroll through the narrow streets lined with wooden houses and stop at a café for a drink or a bite to eat.

Our tours in Kinosaki