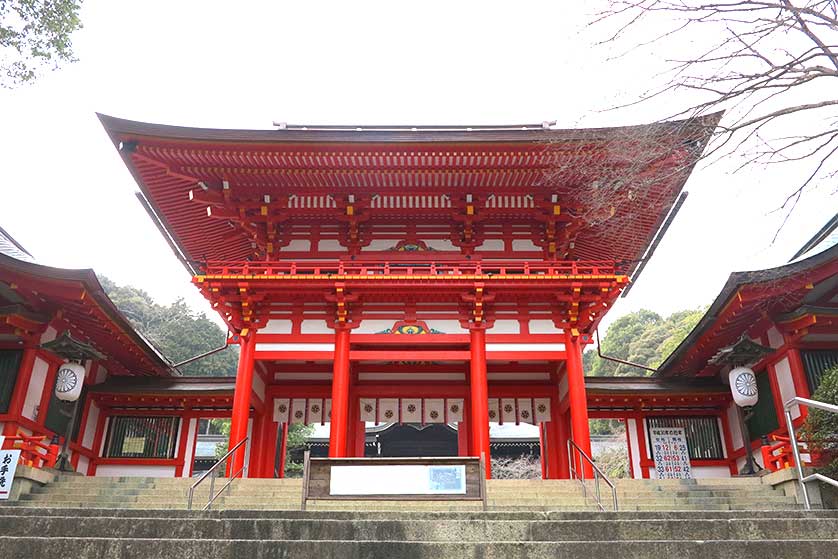 The Romon Gate at the entrance to Omi Shrine 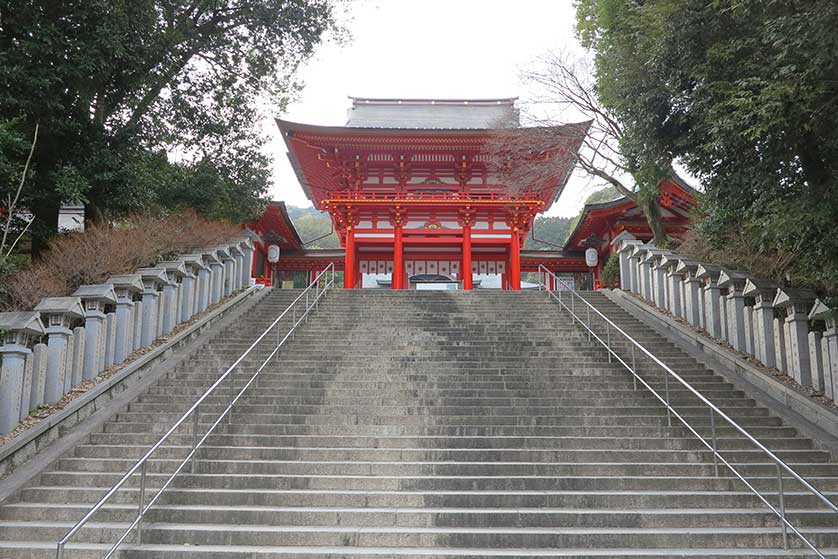 The Romon gate leads to the inner precincts of Omi Jingu

Omi Shrine (Omi Jingu), near Otsu in Shiga Prefecture, was built in 1940 during the Showa Period of Japanese history. 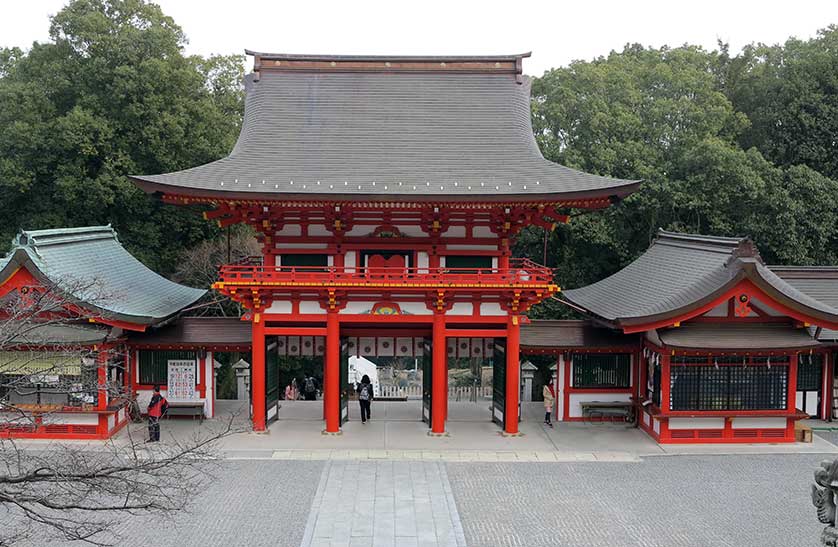 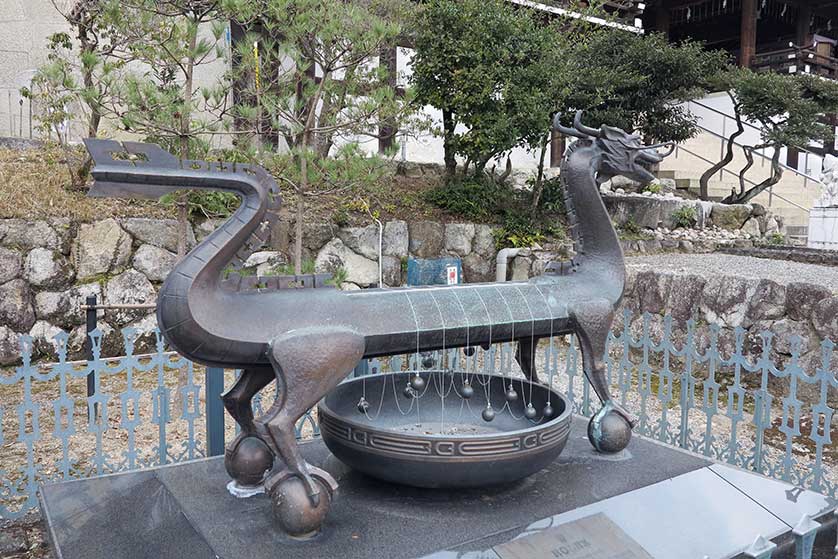 Emperor Tenji (aka Tenchi) moved the capital from Asuka near Nara to this site in Otsu for a brief period in the 7th century. Tenji built his palace here in 667. Signboards outside the shrine explain the history of this time.

The Emperor Tenji is known for various achievements during his reign. He is believed to have ordered the compilation of the first Japanese legal code (ritsu-ryo). He also continued to implement the so-called Taika Reform, began by the Emperor Kotoku, that sought the centralization of the new state through land and tax reform as well as the adoption of the Chinese calendar.

As part of the Taika Reform, Japan's first water clock known as rokoku was introduced during Tenji's rule, an event recorded in the ancient chronicle, the Nihon Shoki. The shrine holds an annual Clock Festival on June 10, with participants wearing ancient court costumes, to celebrate this event.

The grounds also hold various replicas of ancient clocks including a Chinese fire clock, a sundial and a copy of the rokoku presented to Japan from Switzerland. 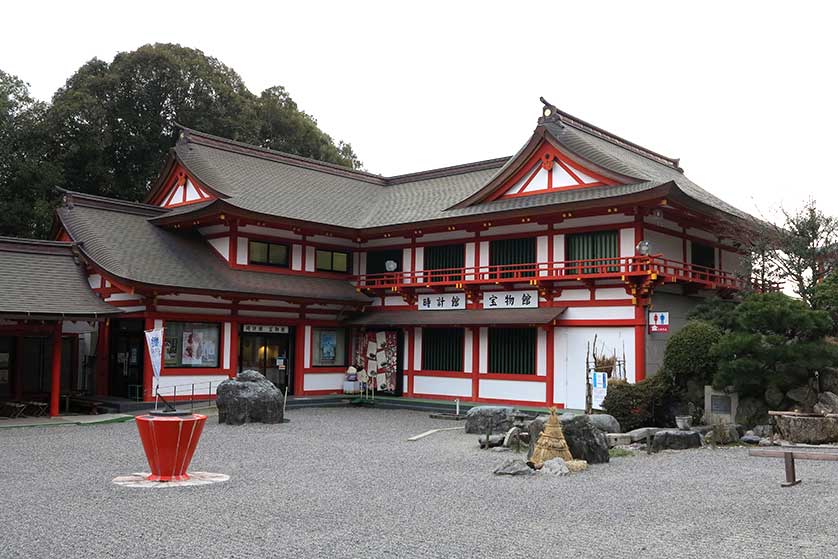 The shrine includes the Omi Jingu Clock Museum on its grounds which celebrates the history of timepieces in Japan. The museum exhibits Japan's oldest pocket watch and a variety of other historic clocks mainly from the Edo and Meiji periods, including an incense clock.

The construction of Omi Shrine in the 1940's was part of a drive to celebrate Japan's imperial past during the height of Japanese militarism prior to the outbreak of World War II.

Other buildings constructed at this time to celebrate the mythical 2,600th anniversary of the founding of the Japanese empire were the Hakko Ichiu pillar in Miyazaki and the Kokaden Palace in the grounds of the Imperial Palace in Tokyo - now preserved in the Edo-Tokyo Open Air Architectural Museum.

Further celebrations of this nationalistic "anniversary" in 1940 include the enshrining of the Emperor Komei, the father of Emperor Meiji and the last Japanese monarch to permanently live in Kyoto, in Heian Shrine.

The many brightly painted vermilion buildings and torii gates that make up Omi Shrine include the following.

The Ichi-no-Torii (First Gate) is the first torii gate as visitors enter the large, wooded grounds of the shrine.

The Ni-no-Torii (Second Gate) is the second torii gate at the top of a steep flight of stairs.

The impressive Romon (楼門) is the main entrance gate to the shrine. 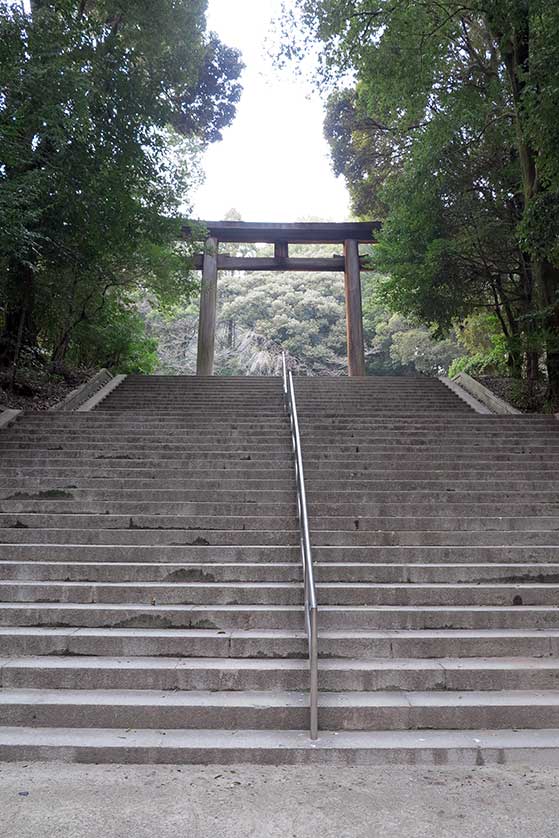 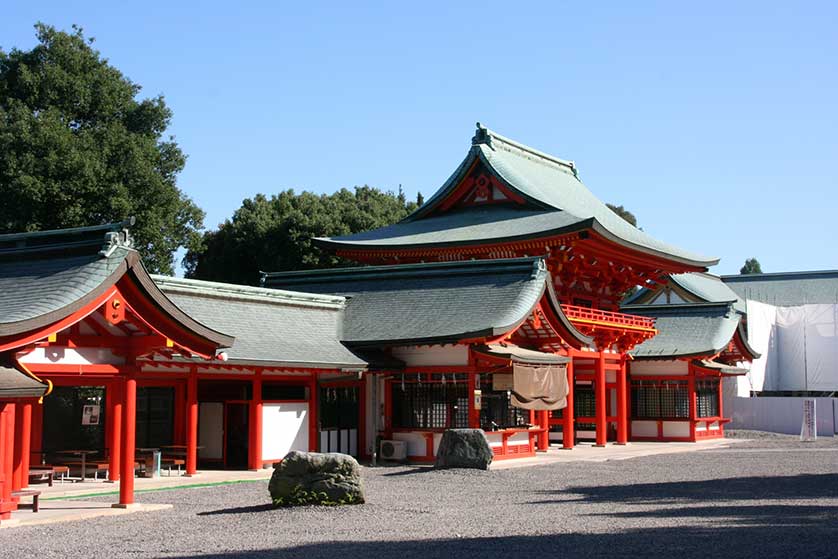 The Gehaiden or outer shrine hall.

The Naihaiden or inner shrine hall.

The Honden is the main hall at the shrine.

There is also a blessing place for cars, the Jidosha Kiyoharae-sho and the shrine's Kaguraden - a stage reserved for sacred music and dance to please the shrine's kami.

The grounds are scattered with a number of inscribed stone monuments featuring various tanka and haiku poems. There is a haiku by Basho and a tanka by the Emperor Tenji. 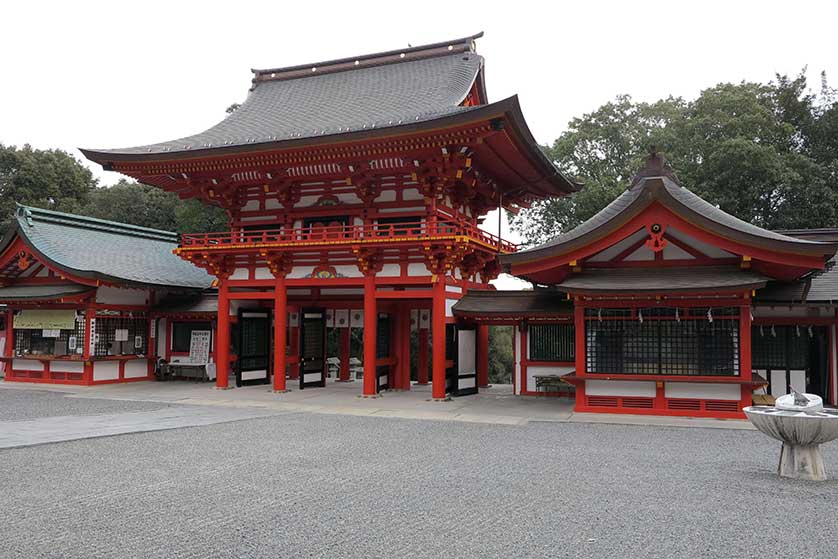 For a small entrance fee visitors can enter the Omi Jingu Clock Museum which has a number of clocks, watches and other historic time pieces on display on the ground floor. The second floor has a variety of treasures associated with the shrine on display including ceramics, masks, glassware, lacquerware and folding screens.

Omi Jingu is the venue for a number of festivals including the aforementioned Clock Festival (Rokoku-sai) on June 10.

In January and July the Omi Kangakukan hosts all-Japan karuta (Japanese playing card) competitions. These events have become more popular since the shrine featured in the popular manga Chihayafuru by Yuki Suetsugu.

The playing cards of karuta have the 100 poems of the anthology Ogura Hyakunin Isshu printed on them, which the players need to remember to be successful in the game. The connection with Omi Shrine is through Emperor Tenji, who contributed the first poem in the anthology.

The shrine is also a popular place for Shichi-go-san, weddings and hatsumode (first shrine visit of the year) 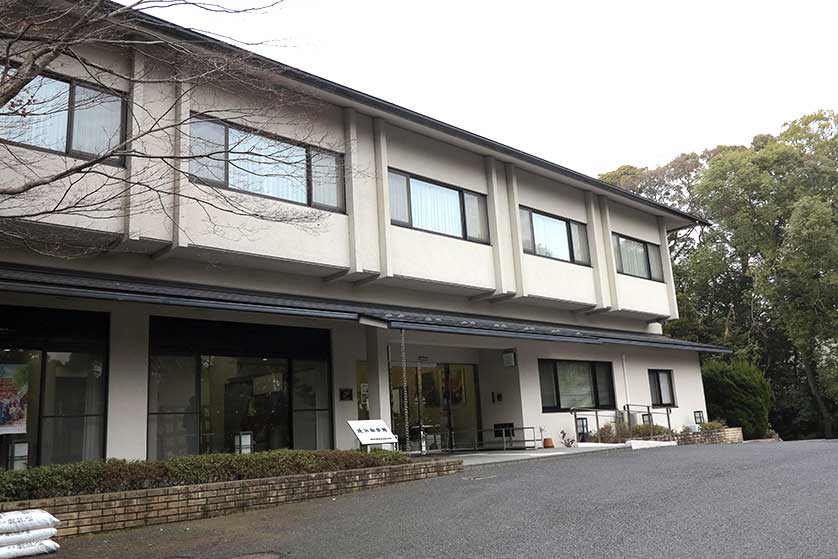 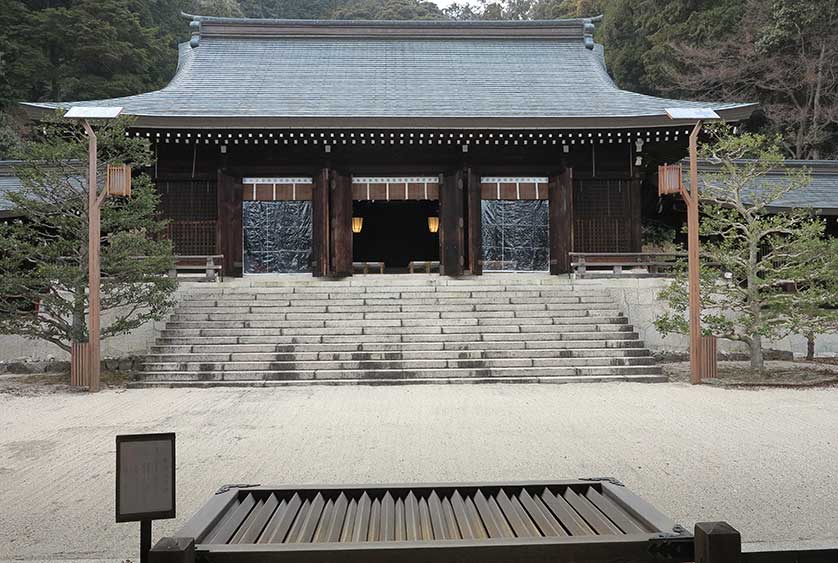 To get to Omi Jingu from Kyoto Station take the JR Kosei Line two stations to JR Otsukyo Station (2 stops; 11 minutes) from where the temple is a 20 minute walk. Alternatively transfer to the Keihan Ishiyama Sakamoto Line at Ojiyama Station and ride to Omi Jingu-mae Station one stop. From here it is a 10-minute walk to the shrine.

From Sanjo-Keihan Station take a Tozai Line train of the Kyoto subway to Keihan Hamaotsu Station and transfer to the Keihan Ishiyama Sakamoto Line to Omi Jingu-mae Station.

From From Yamashina Station in Kyoto there are JR trains to Otsu Station or Keihan trains to Hamaotsu Station (from where you can transfer to the Keihan Ishiyama Sakamoto Line).

A visit to Omi Jingu can be combined on a half-day tour of Otsu from Kyoto with Miidera Temple.

Visitors can rent kimono and hakama at the shrine based on the Chihayafuru manga series. (Hours: 9.30 am - 3.30 am, closed Mondays unless Monday is a public holiday). Alternatively, the nearby Lake Biwa Otsu Prince Hotel offers kimono rental and tours of Omi Shrine. 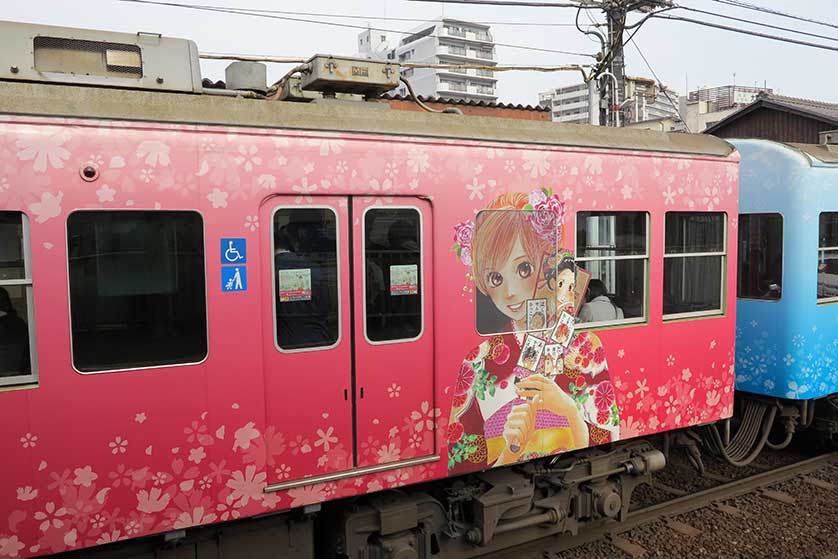 Omi Shrine (Omi Jingu), near Otsu in Shiga Prefecture, was built in 1940 during the Showa Period. The shrine is dedicated to the Emperor Tenji (626-672). The annual all-Japan karuta (Japanese playing card) competitions are held here.