Autumn leaf viewing places in Japan: see a listing of the best spots to see the fall colors and red maple momiji in Japan.

Japanese art and culture has a deep and enduring relationship with the changing of the seasons. Just as the blooming of cherry blossoms is celebrated during hanami season (cherry blossom viewing) in March and April, so are the autumn colors enjoyed in the fall, usually in mid to late November, before the onset of winter and the coming of the plum blossoms in February. 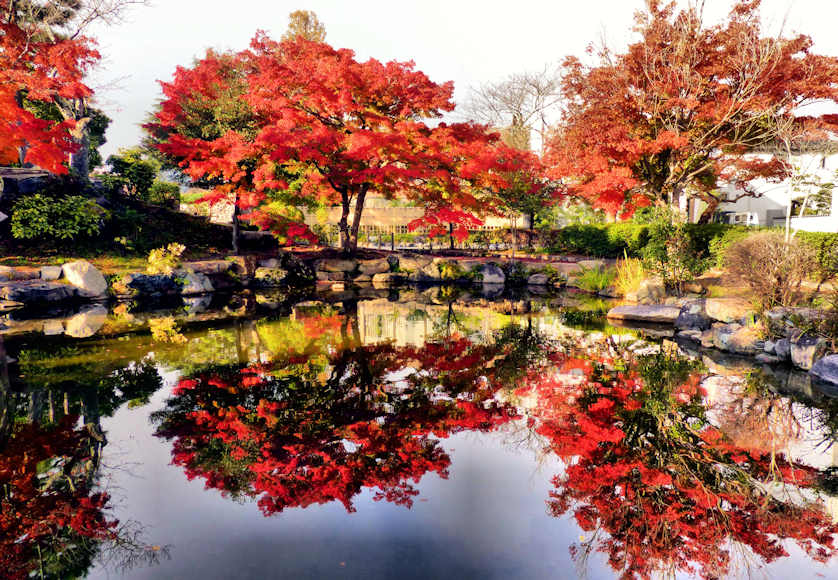 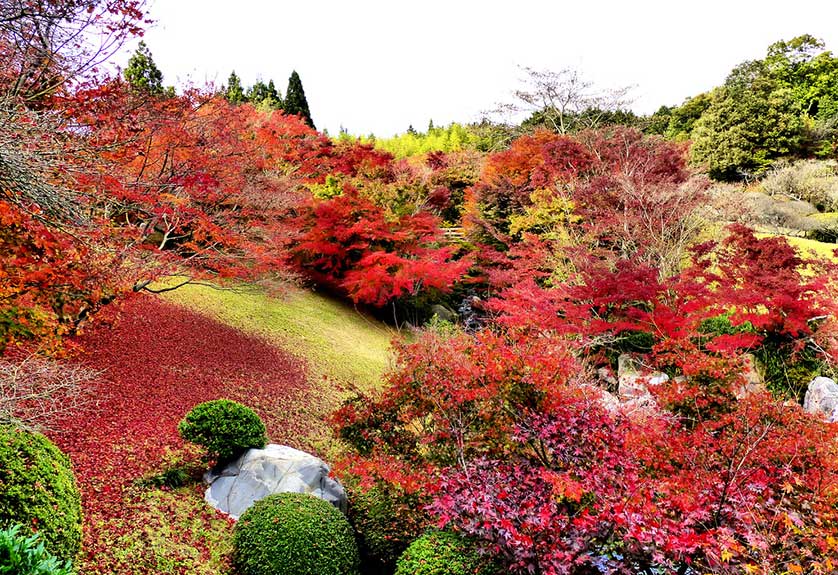 The changing of the colors of the leaves in Japan is known as kouyou (紅葉) or momiji when referring to maples and has become a major part of the tourist industry as people in tour buses and cars flock to the most famous temples and shrines for fall colors in Kyoto and Tokyo as well as the most beautiful mountains and gorges across the country, where the colorful autumn spectacle can best be enjoyed.

The cherry blossoms bloom first in Okinawa and gradually open across Kyushu, Shikoku, Honshu and finally Hokkaido. The kouyou season is the reverse, beginning in Hokkaido and traveling down through Honshu to Kyushu. Though trees at altitude will have their leaves change color before those at sea level.

The main colors are the brilliant reds and scarlets of the Japanese maple as well as the pale yellow of the ginkgo tree.

Below is a list of some of the places to see the autumn colors in Japan. 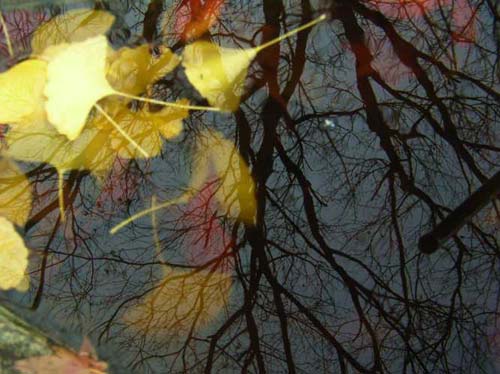 Reflections and autumn leaves in a pond 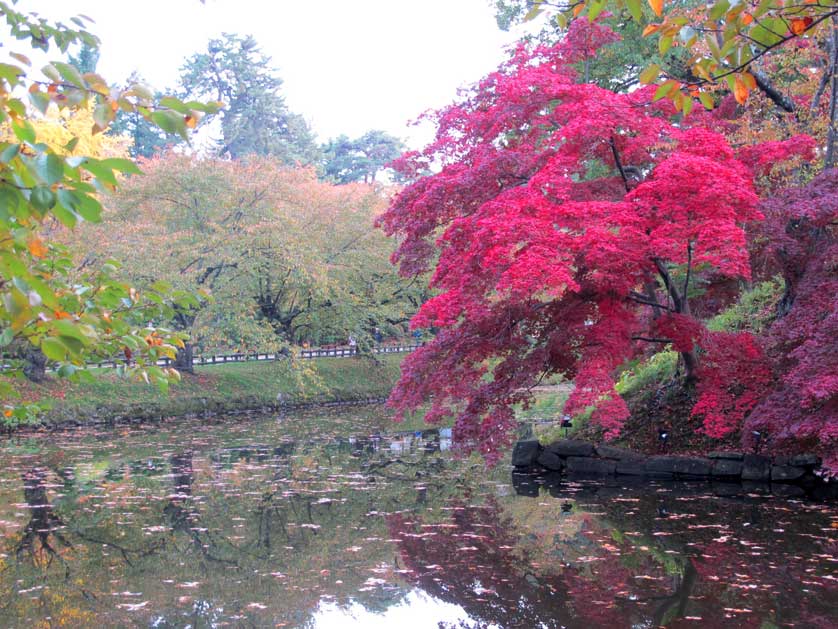 The colors of the fall leaves are reflected in a moat at Hirosaki Castle, Hirosaki Koen, Aomori Prefecture

The northern island of Hokkaido has Japan's earliest kouyou and some of the countries most dramatic scenery.

The Shiretoko National Park in north east Hokkaido is one of the best, and earliest places to see the autumn colors in Japan, usually beginning in mid-October.

The prefectures of Akita and Aomori are both well-known for the quality of their autumn leaves viewing places.

The picturesque Oirase Gorge is one of the best places to see the fall colors in Japan either by car or tour bus or by following the river along a hiking trail.

Hirosaki Castle in Hirosaki in Aomori Prefecture is known for both its cherry blossoms and spectacular autumn leaves. 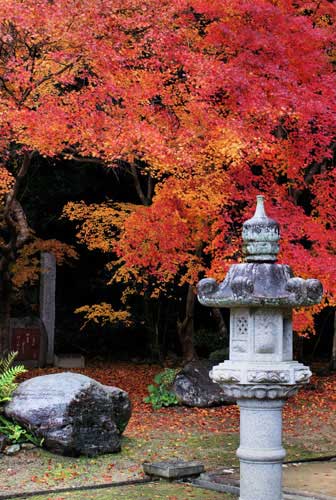 The colors of the fall leaves and a stone lantern, Yatsushiro, Kyushu

Kanto, the area of northern Japan surrounding and including Tokyo has many places to enjoy the fall colors, many of which make for an interesting day trip from the capital or a longer stay.

The area around the Mitsumine Shrine in Saitama Prefecture has hiking paths from the Mitsumine all the way to Mount Kumotori and is beautiful in autumn. The area is all part of the impressive Chichibu-Tama-Kai National Park.

Hakone, west of Tokyo, is an easily-reached natural area from Tokyo and the leaves can be seen throughout the month of November. Hakone is not especially famous for fall colors but there is plenty of autumn splendor to admire. 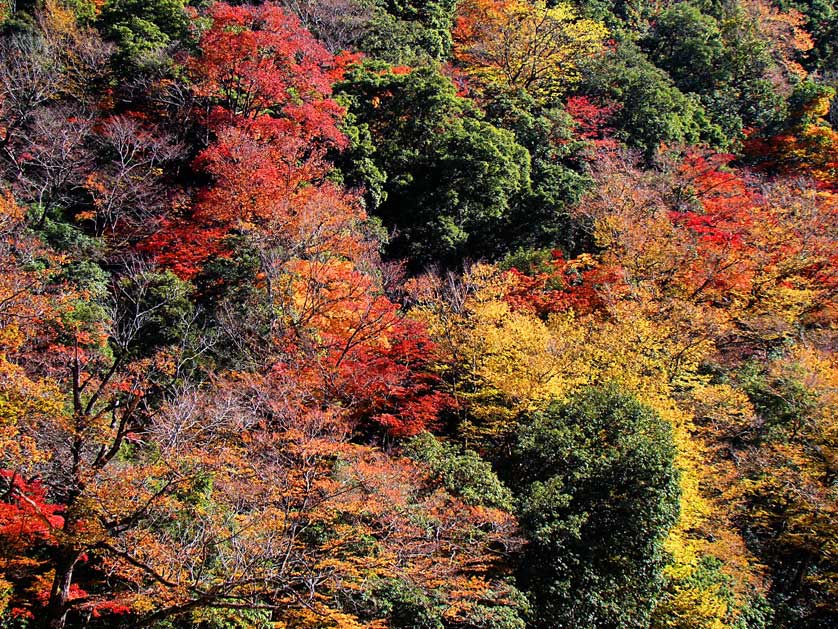 The highland areas close to Nikko are justly famous for their autumn leaves including Lake Chuzenji and the Kegon Falls area and the Kirifuri Highland and Kawaji and Yumoto Onsens.

Oze National Park is a popular hiking spot about 100km north of Tokyo. In autumn the marshland grasses turn a lovely red and yellow color. In early autumn the nikko-kisuge (yellow alpine lily) can also be seen.

Shosenkyo Gorge, near the city of Kofu in Yamanashi Prefecture, can be enjoyed in the fall by walking along the paths following the scenic Arakawa River. 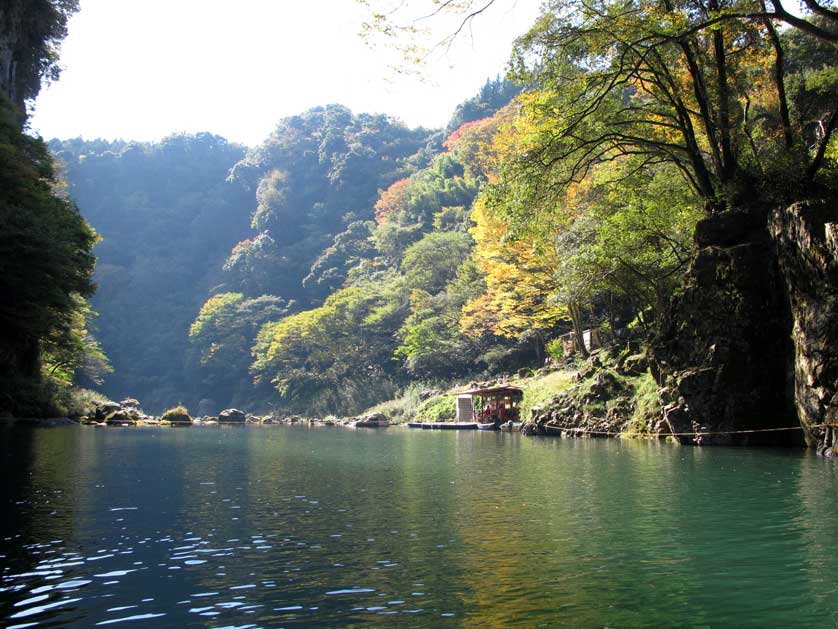 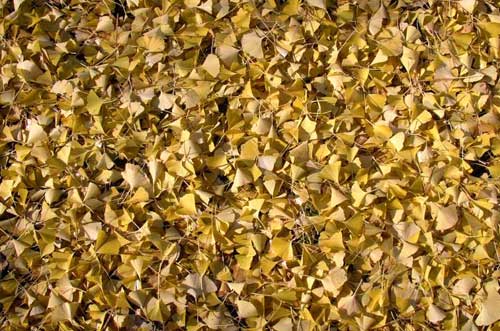 Hama-rikyu Garden is another Edo Period strolling garden which is beautiful year round but is especially popular in early spring for the cherry blossom and autumn for its maple leaves.

Icho Namiki is an avenue of gingko trees (the municipal flower of Tokyo) that are pruned to look almost like pines. The line of trees is in Meiji Jingu Gaien Park in Aoyama.

Koishikawa Korakuen, near Tokyo Dome, is an Edo Period strolling garden that once belonged to the feudal lord of Mito and along with Rikugien (see below) one of Tokyo's best places to enjoy the shades of autumn.

Mt. Takao (Takaosan) is a popular hiking area west of Tokyo and is known for cherry blossoms in spring and its richly colored leaves in the fall.

Rikugien Garden is an Edo Period landscaped garden designed for strolling and has some of the capitals best fall colors. The gardens are open at night and illuminated during the peak season.

Yoyogi Park has numerous Japanese maples and ginkgo trees, most notably in the south of the park. 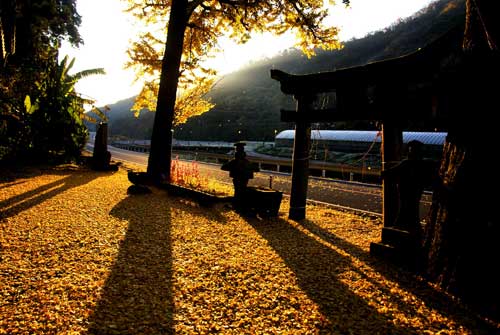 The Chubu area of central Honshu includes the Japanese Alps in Nagano and Gifu prefectures and also parts of the Nakasendo Highway, nowadays a popular hiking route. These mountain areas are perfect places to enjoy the autumn canvas.

The Ena Gorge near Ena, a former post town on the Nakasendo can be enjoyed by cruise boat on 30-minute tours.

Hirugami Onsen and Tenryukyo Gorge not far from Iida in Nagano are both known for their autumn tapestries of colors.

The historic town of Kiso Fukushima is the ideal base for hiking into the surrounding mountains to view the autumn leaves. Karasawa Waterfall is a particularly lovely spot.

Korankei draws visitors by car and bus from the nearby cities of Toyota and Nagoya. The trees line the river and the bridges and viewing spots can get congested on weekends. There are over 4,000 Japanese maple trees in the area and the pathways and bridges are illuminated at night during the leaf-viewing season.

Narai is another former post town in the Kiso Valley and draws many tourists especially on weekends to view the leaves in an Edo Period setting.

Kyoto is the jewel in the crown for refined appreciation of the autumn leaves in its immaculately kept temple gardens and shrines. 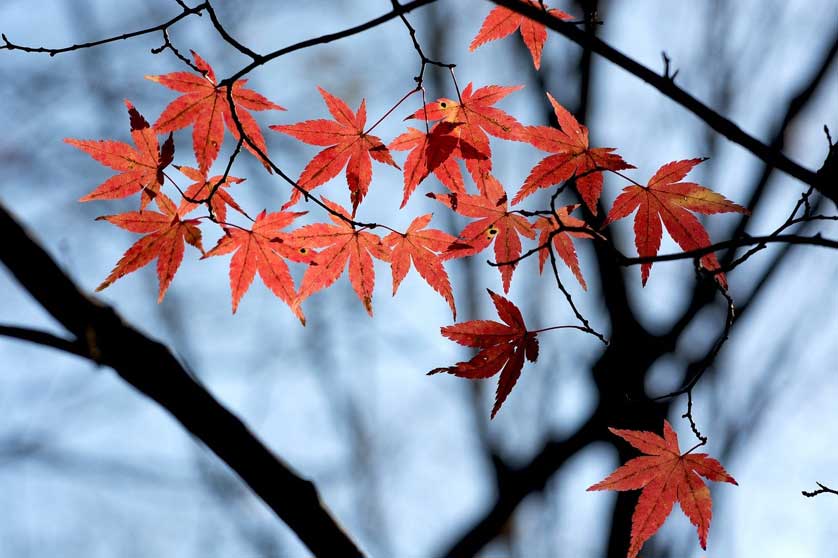 Arashiyama is the pièce de résistance of Kyoto kouyou. On a sunny day the light glows through the small-leafed momiji maples on the hills over the river and in the area's many temples and shrines.

Eikando in the ancient capital's southern Higashiyama mountains close to Nanzenji is justly singled out for its maple trees and fall foliage.

Kiyomizudera Temple draws the crowds year round but especially in the fall when visitors gaze down on a sea of red from the large veranda attached to the Main Hall.

A personal favorite close to Shugakuin Rikyu (also known for its leaves), the sloped entrance path from the main gate of Sekizanzenin is a delight in the fall.

Tenryuji is Arashiyama's most famous temple and known for the vivid reds of its momiji.

Tofukuji Temple also allows visitors to gaze down on the maples in the ravine below from the Tsuten-kyo Bridge. 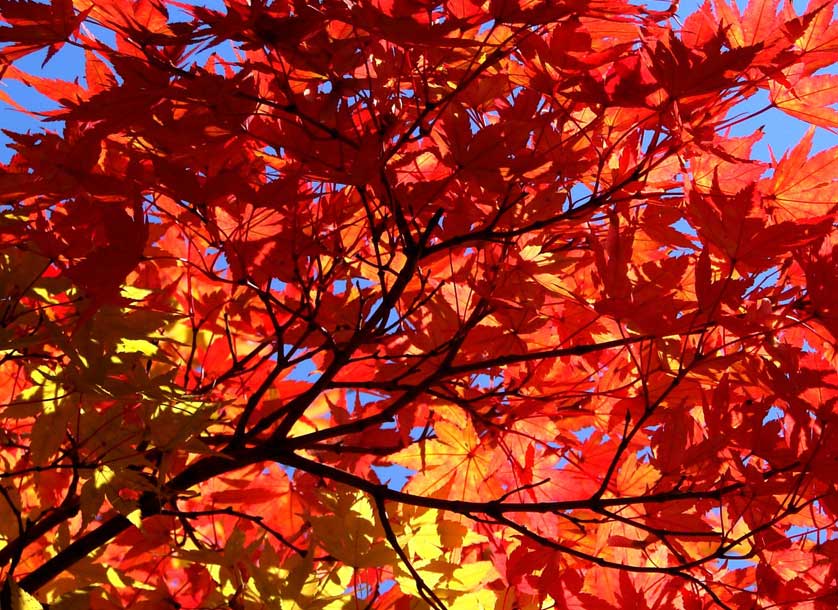 Chomonkyo Gorge in Yamaguchi Prefecture is a riot of red in the fall season.

West and south of Kyoto in the Kansai and Chugoku areas are a number of places to admire the seasonal change.

Buttsuji Temple is a famous Zen training temple near Mihara in Hiroshima Prefecture. Extra buses are laid on during the season and the foliage is illuminated in the evening.

Chomonkyo in Yamaguchi Prefecture in the deep south of Honshu, is a picturesque gorge through which the Chugoku Nature Trail runs.

Gakuenji is the prime spot in Shimane Prefecture for fall colors.

Hori Garden, near Tsuwano, can be visited in any season. In autumn the hills surrounding the garden come alive with vivid colors.

Koyasan in the hills of Wakayama Prefecture south of Osaka has earlier kouyou thanks to its altitude. Expect to see the leaves turn from late October. 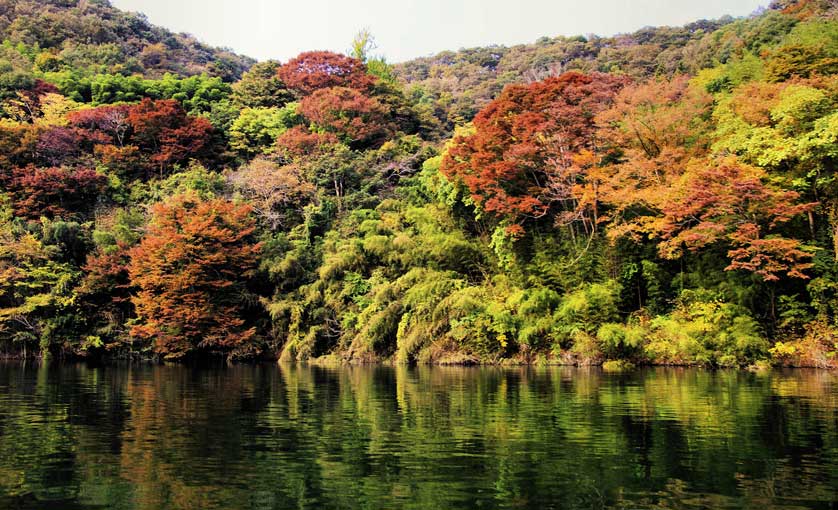 Taishaku Gorge in Hiroshima Prefecture can be admired by pleasure boat.

Mt. Daisen in Tottori Prefecture near Yonago is part of the Daisen-Oki National Park and is known for its hiking and some "interesting" shrines.

Miyajima Island, close to Hiroshima, is another place of choice for residents of the coastal city to view the year's momiji.

Taishakukyo is a lovely gorge and lake in the mountains of Hiroshima Prefecture. The foliage on the sides of the gorge can be viewed by boat.

Yuushien in Shimane Prefecture near Matsue is a beautiful garden year round but also has fine fall colors. 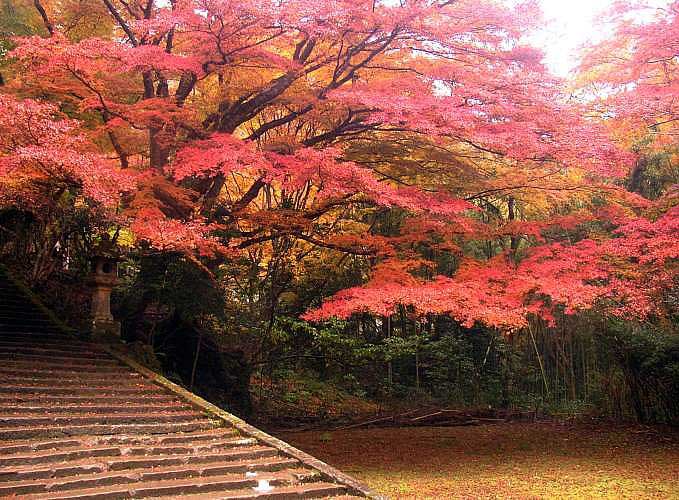 The mountains of Kyushu have some fabulous places to enjoy the change in the season as autumn becomes winter along with a onsen hot spring bath.

Gokanosho is located in a remote area of Kumamoto Prefecture in Kyushu. The leaves draw large numbers of weekend visitors from the bigger cities of Kyushu, namely Kumamoto and Fukuoka to the otherwise hardly traveled area. 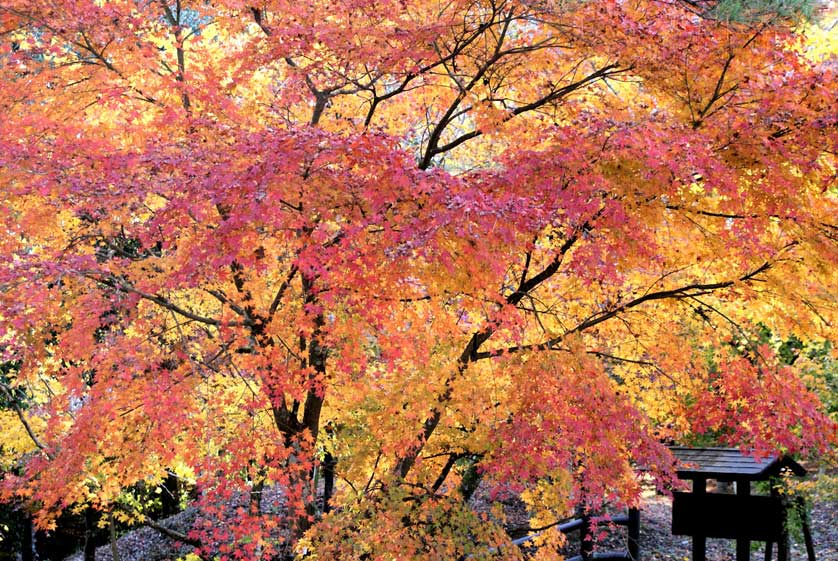 Sandankyo in Hiroshima consists of a series of gorges running 12km to Hijiri Lake in the mountains near the border with Shimane Prefecture. There is one bus a day to Sandankyo from Hiroshima Station (1 hour).

Sogi no Taki (Sogi Waterfall) is a spectacular waterfall in the countryside of Kagoshima Prefecture. The park is a favorite spot for viewing and for several days in the later part of November the foliage and falls are illuminated.

Takachiho Gorge is another of Kyushu's top autumn leaves viewing spots. Visitors can hire a row boat to look up at the foliage and there are hiking trails along the banks of the river.

The Yabakei Gorge is an area of outstanding natural scenery and beauty located on Kyushu in the north of Oita Prefecture, south of the town of Nakatsu. 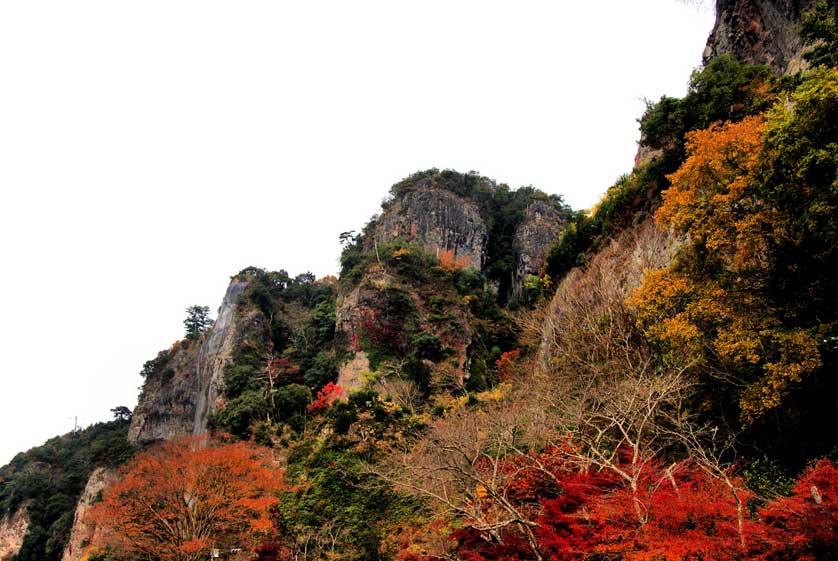